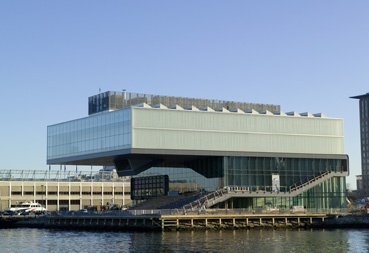 In Boston, a city notoriously hostile to the avant-garde, the Institute of Contemporary Art is struggling to become a major institution. It opened in 1936 as "The Boston Museum of Modern Art", a small, regional MoMA affiliate. After several years it asserted its independence, eventually changing its name to "The Institute of Contemporary Art" in 1948. The ICA proclaimed the "contemporary" against the "modern" in recognition of Modernism's exhaustion, turning instead toward a supposedly humanist inclusivity. Unfortunately it did so by rejecting abstraction at the very moment of the ascension of American abstract painting. It looked conservative to the avant-garde but was still too radical for the general Boston public whose attention the name change was a bid to attract. And so it remained a relatively under-attended Kunsthalle, with no permanent home and no permanent collection - until today. Along with an attention-grabbing new building, it has decided to begin collecting contemporary work. MoMA, with its own new building, has also begun the wholesale collecting and display of the contemporary. Despite the difference in scale, the two museums have begun to converge once again as they enter into the process of institutionalizing contemporary art.

As with its early name change, the arrival of the ICA's new building is also a bid to attract public attention, but one that, after only a few months, seems to be working. The time for contemporary art in the US, outside of New York and Los Angeles, is suddenly ripe. The new ICA marks the first time in nearly 100 years that an art museum has opened in Boston. Other smaller US cities have developed healthy audiences for contemporary art, but not Boston. Despite a decent art school and one of the highest standards of living in the country, it has virtually no compelling contemporary art galleries and little major-museum support. For years, far less visited cities (Minneapolis, Columbus, Cincinnati) have had successful contemporary art museums with starchitect-designed buildings. Driven especially by affection for modern and contemporary art, the "museum experience" has been well defined for a US public that has come to love it. It goes something like this: enter a wonderfully strange building that is a work of art unto itself in order to look at equally "interesting" works of art (audioguide firmly plugged into ear), maybe participate in a relational work or take in a video or film, but also eat at the restaurant and go shopping for objets d'art and art books at the museum shop. All of this provides a day's worth of fun and entertainment dollars well spent on something moderately more cultured than going to the movies.

Just this kind of high-end museum experience is on offer at the new ICA in a building designed by Diller, Scofidio and Renfro, best known for their Blur Building at the 2002 Swiss Expo. As with so many avant-garde architects, their work has been largely a paper-only affair. Despite being awarded the half-million-dollar McArthur "genius" Award in 1999 (the first ever given for architecture), they gained recognition more for their theatrical and interior designs than for their buildings. The building is located on Fan Pier, one of the last, large undeveloped corners of urban America. A former 19th-century shipping port just south of downtown, the Pier is now slated for redevelopment into a thicket of corporate-style office towers and luxury condos. The ICA was given the land for free by an act of corporate largess, situating it as the cultural capstone in what is likely to become an otherwise offensively boring scheme to reuse valuable land. Set in a place where there are still, for the time being, a few remaining warehouses, the building is the apotheosis of the warehouse-space-turned-gallery.

The top floor of the building is a long, double-height rectangle. Saw-tooth skylights and the physical plant hover on its roof. All of the exhibition space is on the top floor, extending laterally out over the other three stories which act as its pedestal. The cantilever is enormous, seeming to extend for nearly half the building's length. Sheltered under the cantilever is a large set of wooden stairs that extend from the boardwalk up to the side of the building, providing generous public outdoor seating with views of the harbor. Remarkably, they continue inside, through the building's glass-curtain wall, becoming a support for theater seats. At the back wall of the theater the floor bends up, folding back toward the river as the theater's ceiling and re-emerging as the wood-covered underside of the cantilever floating overhead. The effect is as if the boardwalk was extended and folded into the structure of the building, blurring outside and inside, floor and ceiling.

The fold is written clearly along the outside of the building. From the north side (the best approach, made by following the boardwalk from downtown) it looks like a bent I-beam ribboning through the whole of the building, the modernist box pierced with a nod to both Mies' revealed structure and Zaha Hadid's architecture of the oblique. But the I-beam is just cladding, a grand folly that says nothing about the enormous trusses actually holding the galleries aloft. Its purpose is formal to generate a tremendous amount of visual tension, as if the building were about to dive into the harbor. On the south side the ribbon seems to rise up from the ground like a wisp of smoke, bulging pleasantly around the restaurant inside before doubling back to the cantilever. The alternation of transparent and translucent glass and metal on the south and west sides seems random, a poorly executed attempt at Corbusian modularity. The west side, which faces the street, is particularly tedious, looking even less interesting than the nearby warehouses. It is saved by a small detail on its lower right section where a corrugated metal filled panel is lightheartedly pierced by a protruding vent pipe. Recalling both Le Corbusier's nostril-like drains and the legions of exposed ducts in post-Pompidou architecture, a curator at the ICA perfectly described it as the building's anus.

Inside, on the ground floor, the museum's gift shop has been placed underneath the outside stairs. This acknowledges commerce as one of the foundations of the museum experience while rudely assigning it a position under the posteriors of the harbor-gazers seated above. On the top floor, the art galleries echo the exterior in a further celebration of the sky lit, concrete-floored, wide, white box of the converted warehouse. They are the quintessence of the SoHo/Chelsea gallery, but produced from scratch, a pleasant simulacrum of a style that had once dingily produced a kind of down-and-out authenticity which now stands for the contemporary art museum experience. Following the pioneering efforts of the Dia Foundation whose new Dia:Beacon only reaffirms this trend, other new museums from Tate Modern (an actual conversion, but an especially heroic one) to the MoMA have taken up this effect. Like these other museums, the ICA's galleries are full of large-scale, anti-intimate works whose public address is designed to accommodate throngs of art lovers on a casual stroll. And some 47 000 visitors have strolled through in the first month alone, the same number of visitors as in the whole of the previous two years.

In comparison, MoMA's new building, designed by Yoshio Taniguchi which opened in 2005, is an even grander homage to the wide, white space. Most of the 125 000 new square feet of gallery space has been dedicated to contemporary art. Despite nearly doubling its entrance fees it has been tremendously successful. It is almost always overflowing with crowds because it provides an unparalleled museum experience. The old MoMA was already the most popular modern-art museum in the US not just because it was the first, but because it retained an air of scholarly intimacy, even after its 1984 renovation. Today, its success has come from an expansion based largely on buying into the publicity-driven scale and impact of much contemporary art. In accepting the Chelsea-fication of the art world, it seems to be succeeding as the country's most popular contemporary-art museum as well. For the contemporary museum (and art gallery), leaping backwards to the 19th century salon, the crowd is now as important as the work. The work, as was the case with Delacroix, becomes a means of captivating the masses. At the new MoMA, this is oddly most evident where there is the least art: in the nearly empty interior atrium. Originally intended to be an indoor sculpture garden to rival that of Philip Johnson's now-restored outdoor garden, it has remained bereft, reserved for corporate parties. In it, even the overblown spiritual aspirations of Barnett Newman's "Broken Obelisk" appear insignificant. The space is a cathedral-sized tribute to the white cube, an excessive voiding of space in a city where nothing is more valuable, kept on standing reserve for the exhibition of cocktail-sipping investment bankers whose companies underwrite the exhibitions on display. Like the Metropolitan Museum's use of the Temple of Dendur to host parties, and thanks to the lack of public funding for the arts in the US, the very heart of the MoMA has succumbed to the "temple of dinner" disease.

Conversely, at the heart of the new ICA lies one of its most striking features: a computer-filled, education-department overseen "mediatheque" hanging from the underside of the cantilevered galleries. From the outside it looks like a hatch descending toward the water. Its fully glass-paned end reflects the water and land across the harbor like a moving landscape painting affixed to the building's exterior. From the inside it steps down, forming another set of benches, pointing downwards to frame a view filled edge-to-edge with an ever-mobile image of the water below. The room is modest in size (one of the few modest spaces in any recent contemporary museum), the image-wall at the end about the same size as the works of art in the galleries and so also about the size of a movie screen. The window becomes a point of reflection on the spectacular public address of contemporary art in its competition with the culture industry for the public's entertainment dollars. Its view overwhelms the computer screens and hushes the excitement of the surrounding galleries, opening onto the predicaments of the contemporary art museum today. In its contemplative quietude, the architects have managed to simultaneously acknowledge and counter the accession of the museum experience to corporate-underwritten, culture-industry-sized entertainment. Like the stairs outside they have generously provided a place of respite, here for the crowds to take a break from getting their money's worth of the art experience.