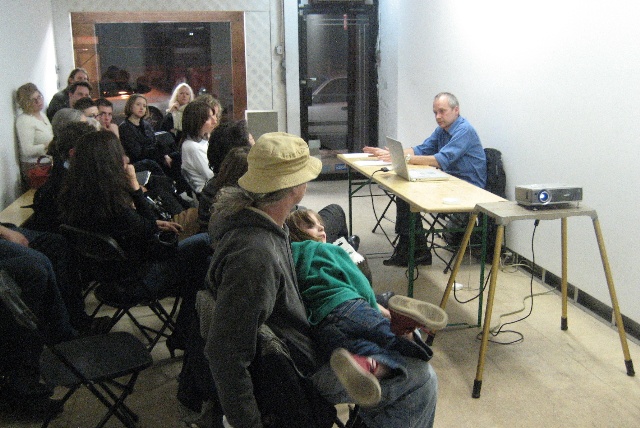 Underneath each picture there is always another picture.
Roland Barthes

Two photographers whose work is on view at The Museum of Modern Art and the Whitney Museum of American Art, Jeff Wall and Taryn Simon, share veneration for the perfection of the specific image. There is a curious affinity between these two exhibitions. While Simon takes pains to present documentation and facticity in an abstracted, highly formal way, Wall spends months of preparation constructing an image that appears realistic while being entirely staged and obsessively controlled: apparently prosaic pictures rich with art history, critical theory and cultural politics.

Simon, a photographer whose work has not yet been much considered within an art context, is showing seventeen large-format photographs at the Whitney under the title “An American Index of the Hidden and Unfamiliar”. These are highly produced, aestheticized images of largely undocumented locations in the US: sites usually inaccessible to the public, reflecting realms of government and security, science and medicine, entertainment and religion. Simon is not just pushing the limits of what images we are allowed to reproduce but, more importantly, is mixing photographic aesthetics: She is giving a stage to the unrepresented, while shooting with elaborate commercial equipment traditionally used in the seductive, populist productions of advertising and the Hollywood industry. To emphasize their often urgent content, the ethereal, dark photographs are accompanied by extensive captions. Ranging from military operations on simulated urban terrain and a woman awaiting her hymenoplasty surgery to a copy of the Braille Edition of Playboy magazine and the room in which emerge the sub-marine cables containing all transatlantic voice and data transmissions. Simon covers the arcana of American ideology. The amount of time she spends preparing for each photo, whether in research or the quest to gain access, can take months or years, a working method that results in a small but reverently treated number of images.

The Eastern-bloc equivalent of Simon’s exhibition might be “Cosmic Communist Constructions” on view at the Storefront for Art and Architecture. French photographer Frédéric Chaubin shows what he brought to light during five years of travel through the former Soviet Union: a barely documented radical architecture, set in the middle of nowhere and constructed beyond all Western norms, built during the last two decades of the Cold War, set in a fading empire’s time of both ending and opening; as he writes, “orphaned monuments, scattered across planet collectivism”.

Jeff Wall’s survey at MoMA, spanning almost three decades with only thirty photographs, is a record of developing themes and pictorial strategies at the rate of about one photo a year. Each room seems to present one inquiry, including the early self-portraits, the digitally manipulated paradoxes that hint at a slight comment on the media theory of the 1980s, the solitary men in mysterious moments, the absurd theatricalities, the beautiful still lives that feel like a pause or rest in his trajectory, his takes on art-historical compositions from Manet, Hokusai or Walker Evans. His explorations of beauty and melancholia, the benign and the morbid, in genres ranging from portrait to landscape to still-life, cityscape to interior, are set in relief by highly theoretical concerns, yielding an uneasy tension, both theoretically and emotionally. Seen altogether, this richly uneven oeuvre gives a surprising sense of the project’s overall lack of resolution, and it’s a productive and intriguing quality. However, while Wall is clearly an important artist, the retrospective makes one wonder if the questions he has pursued over three decades continue to have the same urgency or relevance, or if his unrelenting attention to a particular set of issues ultimately leads to a certain stasis.

Walter De Maria’s current exhibition presents another somewhat historicized position, but one which has not been seen in New York for fifteen years, save through Dia’s long-term installations “The Earth Room” (1977) and “The Broken Kilometer” (1979). Deriving from numerological principals, the two large-scale works on view in both of Gagosian’s Chelsea spaces are linked through concept and materiality. The astonishingly beautiful “A Computer Which Will Solve Every Problem in the World/3-12 Polygon” occu-pies the entire 21st Street gallery. Dating from 1984, before computers were quite the ubiquitous objects that they are today, the work consists of a field of seventy-five solid stainless steel bars, each a meter long, arranged in ten rows. Each row adds an additional bar, and with each row the bars, in cross-section, receive an additional polygonal facet, moving from triangular at one end of the gallery to dodecahedral at the other. The glistening shapes and perfect alignments seem to shift as one moves through the space. It is an elegant exercise in heightened awareness, both intellectual and physical, provoking careful observation as a form of understanding; the viewer goes from specific cognizance to universal speculation. With the vacuum left by the departure of Dia Art Foundation, it falls on commercial galleries to offer this historical experience of the minimal sublime.

The press release quotes De Maria: “Art re-minds us we’re alive.” That this reminder could be proposed through mathematical, formal means strikes a rare chord in today’s art world, and it is this that makes the exhibition so exciting. The question remains as to whether universalism can be possible without inviting the stirrings of totalitarianism. It is said: “To understand the rules on which geometry is based is to understand one’s culture.”

Sherrie Levine remarked: “What I discovered is that it’s even more troublesome when something’s almost original.” Paula Cooper opens her third Chelsea space with an exhibition by Levine, a series of twenty-four found postcard collages and seven found objects cast in bronze. Presented in vitrines, the three piggybanks, three furies and a single hornless steer skull make a powerful grouping. The complications of capital in the art world and beyond are insinuated through the slightly different bronze pigs with slitted spines, tellingly titled “The Three Muses”. “The Three Furies” is the name she has given to three gnarled branches with vague resemblances to dancing and writhing people, cast in bronze; these represent the powerful divinities that personified conscience and punished kinship crimes in Greco-Roman mythology. They were the daughters of Mother Earth, conceived from the blood of Uranus when he was castrated by Kronos. And, in the powerless center of this group, the hornless steer skull stands as a momento mori to castrated male power. The press release refers to one more work, a reprise of Charles Baudelaire’s 1857 poetry collection “Les Fleurs du Mal”, which is to be found only at Paula Cooper’s bookstore a block away, discreetly bringing this romantically sinister masterpiece, set in another twilit age, into the realm of Levine’s show.

The high-pitched emotions implicit in the sculptures are cooled by a stroll down the length of framed postcards, each depicting the same indistinct reproduction of waves breaking on a rocky beach. Like calendars, postcards are a vehicle for art to intimately enter lives. The repeated image of the ocean brings us back to the eternal breaking of the waves, and the more familiar, perpetually returning anxiety we connect with Levine’s work.

Countering the historical positions in Chelsea and the museums, the Lower East Side’s Orchard and Reena Spaulings recently presented live acts that were carried on a sense of historical reconstruction or reference. At Orchard, Dutch art historian Eric de Bruyn delivered a salon-style lecture on Michael Asher’s 16mm film “no title” (1973/2005). Prior to 2005, when a new match print of the film was produced and projected at Orchard, the film had been screened only once, in a dorm room at the Cambridge School of Weston in 1973. According to the artist, the utterly neutral gray film, which was generated entirely through a chemical rather than optical process, can only be screened a single time because the scratches made by projection destroy it. De Bruyn’s lecture lead to several unresolved debates among those present: was the piece intended as a comment on structuralist or materialist filmmaking, or was it a more playful project in which Asher brought his concerns to the film format? Was the Orchard reconstruction a unique case, or might it be aligned with numerous similar instances, such as reconstructing neon pieces by Bruce Nauman or Dan Flavin?

The question of historical reconstruction is even further complicated in dance and performance, for in this art form the reenactment of a historical piece can take place only as an approximation or interpretation. This was addressed through Jutta Koether and Kim Gordon’s “Dead Already”, a collaborative exhibition at Reena Spaulings. The opening included a participatory dance workshop and performance by Isadora Duncan dancer Cynthia James, after which Dan Graham presented two early videos, and the noise band Magic Markers played. Koether’s work, like that of Reena Spaulings itself, has recently received increasing critical and commercial recognition, and here she seems to react to what can threaten to be a process of deadening historicization. Against such potential fixity, the show keeps moving, going through various guest appearances and performances until its May closing, “jumping ahead outside of time and space, or just sideways”, as Koether writes. As she says in the same statement, quoting the words of Nietzsche’s Zarathustra: “He, however, who cometh nigh to his goal, danceth.”

Josh Smith’s Luhring Augustine debut was a show of lush and apparently abstract paintings, recalling German expressionism. From the earlier name paintings for which he is known, Smith here took individual letters and used them as grounds for quasi-landscape painting. Halfway through the show’s run, he swapped out all these pieces for new ones, insisting that it was the same show, just with different images. The gesture provoked a widespread and somewhat naïve critique that presupposes he did this to sell more works, or that he did so only when the first round sold out. But today’s logic of selling in Chelsea is largely disconnected from what’s on view. Sales pitches happen on a more personal level, or they respond to an existing waiting list. Smith’s gesture is, instead, an act to be seen in the conceptual tradition, a way for him to challenge himself and the critics by not simply staging another New York gallery show of paintings to look good over sofas, but to generate a somewhat perverse debate around what it means to show and sell and what is left for the artist to do after a certain level of success. Or he may have just liked looking at his work in the elegant white cube space of the gallery. 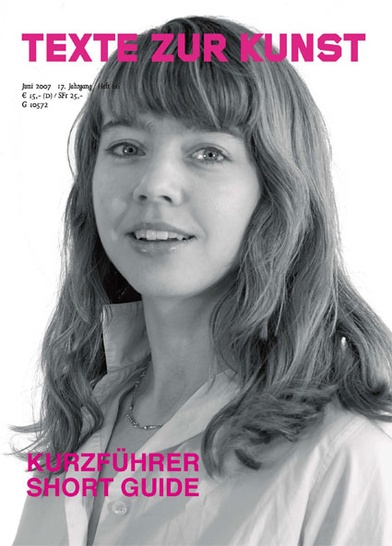