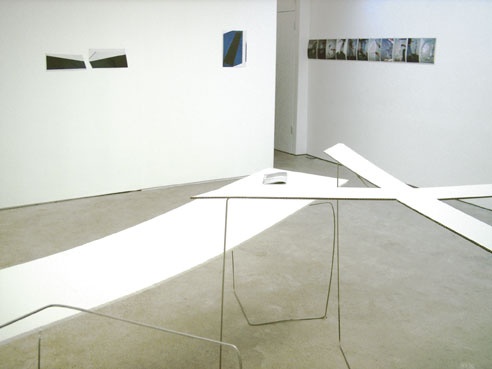 In Nora Schultz’s sculpture “Block Letters” there’s a description of two people who find themselves pursued by architecture. The account occurs in a modular text, printed twice to appear symmetrical and stretched over four low frames that extend in stages like a book being pressed open. The first frame stands with two panels of text forming a right angle, the fourth in the series is flattened out to a smooth plane propped against the wall: Two people walk around a blank monolith of a building described as “the block”. They notice that “the block walks with them”, they agree to ignore it and “only look at each other”. Failing to forget it entirely they decide to destroy it.

The architectural arrangement of “Block Letters”, its neat geometry, mirrored text and the plain poetry of the writing assert a kind of formal order. The figures in the text move around like atoms set on course by the forces of this order. In Schultz’s work this notion of an overriding structure or an idea of organisation, sensed in terms of its limits or as a blank stoppage, is something that is either traced with archaeological care or overthrown with a rebel ambition to live beyond its terms.

The base form of “Block Letters”, this rectangular frame folded in on itself, is repeated in a series of wiry steel uprights that form an elegant support structure for “X-Tables”. The tallest frames draw near to each other carrying a soft X-shape hewn from crisp, white corrugated board. Another pair are parted like trestles for a heavy biscuit of plasterboard that slumps with its own weight. In the accompanying text for the exhibition Schultz describes this plasterboard as “found footage”, something collected from “the construction place next door”. Although the material is of a type featured elsewhere in the show, manufactured for the straight craft of building or drawing, its classification as a found object sets it apart, proffering its bruised edges and warped state as venerable marks of age.

Schultz’s sculptures have a kind of inevitability about them. Whilst “Block Letters” describes the presence of something too hefty and monumental to be negotiated, “X-Tables” push up materials like flimsy relics to systems in language and plastic form. They suggest an idea of the building blocks of civilization and the transmission of culture over time, scored by social and economic forces. In his book “The City in History”, Lewis Mumford traces the origins of modern urban planning to the bureaucracy that emerged to serve the resurgent capitalism of seventeenth century western economies. Cities were extended in rectangular blocks divided by streets and avenues, standardized units that made for swift calculations in property transactions and construction. Historical, topographical or social concerns were secondary. Mumford links this with changes in education that placed emphasis on literacy and numeracy, essential to trade over long distances. Such abstractions of space, money and mechanical time reduced experience to “just those elements that were capable of being split off from the whole and measured separately” [1].

Nora Schultz’s work suggests a world evidenced by the remains of these abstractions. A series of photographs entitled “Material Replacement” formally approximate the jaunty angles and tendencies of repetition in a written language or code with the components of sculptural works reappearing as fields of printed colour. In “Countdown Performance” a sheet of stainless steel is bent into a sequence of numerical figures recorded on photographs, the images counting ten to zero. The same piece of metal is employed as a ruler to make a series of drawings that drop down the walls in a mesh of line like loose cartography and appears again coiled like a full stop, nestled in the lap of paper trailing from the final drawing. The characters for quantifying are interchangeable with the tools for measuring and making.

The work employs a language that formally asserts the authority of a definitive, autonomous statement, only to undermine it. Elements will not be fixed, preferring to cancel each other out. The standard physical and conceptual frameworks for an exhibition appear corrupt by the work or an act of duplication. The base structure for the “X-Tables” sits neatly in the grooves of the floor, other sculptures are propped against the walls, and drawings are creased into the corners of the space. The press release is replaced with texts by Schultz and the artist Joseph Strau, the invite by a poster, the exhibition is refashioned in a booklet entitled “The Blockletter Magazine”. Amongst this archaeology of systems in language and architecture there’s an idea of continuity, multiplication and renewal that quietly wins out over the schematic inevitability – Schultz teases out the possibility of accounting for a structure, its origins and effects and finding new ways to transform it.