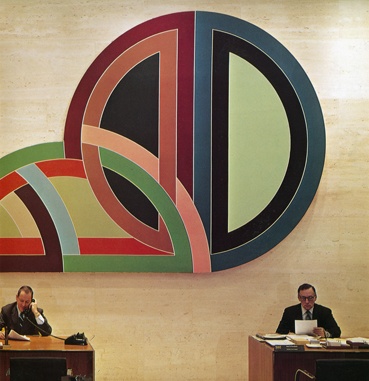 This issue of Texte zur Kunst is dedicated to ”abstraction” in modern and contemporary artistic practices and aesthetic theory, particularly in relation to the economic conditions of art. It aims at establishing an understanding of abstraction that exceeds the historical limitation of this generic term in art-historical parlance by decidedly expanding its implications beyond the realm of (neo-)formalist preoccupations with aesthetic surfaces, especially in painting. Instead of prolonging this notion’s reduction to self-reflexive forms of modernist medium-specificity, the contributions gathered in this issue seek to explore abstraction in the context of the socio-economic upheavals of modernity: “All that is solid melts into thin air,” as two nineteenth-century art theorists put it.

Abstract art often denied its modernity by laying claim to universality and timelessness. Ornament dominated the art of many cultures, and ornament is based on abstract forms and patterns. Wasn’t abstraction the very essence of art, constituting a genuine “Weltsprache der Formen” that would unite the world on a more fundamental level than that of exploitative geopolitical relationships? This approach, which was effectively resuscitated in 2007 with documenta 12’s all too decontextualizing and neo-formalist take on the “migration of forms”, is no doubt to be preferred to neo-conservative stagings of a supposed “clash of cultures”. However, it glosses over differences that need to be articulated. Moreover, the ideology of abstraction’s universality is itself anything but universal and timeless — as contemporary artistic practices explicitly dealing with this formalist legacy aim at emphasizing (see the contribution by Sabeth Buchmann). Rather, in its symptomatic disavowal of history, it is quintessentially modern.

But can abstraction’s modernity be defined in a more determinate and positive way? Especially if one reconsiders abstract art’s destruction of traditional western representation in terms of the equally abstract systems of equivalence between commodities and currencies established in modernity, new genealogies emerge that break with the all too often suggested break between modernism’s self-reflexivity and postmodernism’s appropriation of the imagery of popular culture (see the contribution by Sebastian Egenhofer). Marxism always analysed capitalism as a historical and social process — as liberatory as it is violent and destructive — that abstracts people and goods from feudal bonds, replacing them with the abstract bond of exchange value. Can formal abstraction in modern and contemporary art then offer any insight into such processes? Can abstract art map our abstract world? (See the contribution by Sven Lütticken.)

Concepts such as “postfordism” and “immaterial labor” theorize the privileging of social skills in relation to the rise of “service” or “creative industries” and globalized exchange systems, indicating that the conditions of production have considerably changed since the crucial texts of aesthetic modernism – up to the late works of Adorno and Greenberg – were published. What can be said about the role of abstraction under what Hal Foster once called the contemporary “political economy of electronic media and design”? For Greenberg, the collapse of abstract art into “good design” was an ever-present threat, suggesting that his narrative of Modernism’s autonomous trajectory of self-criticism might in the end just be an ideological misinterpretation of a much more general economical-cultural imperative; today the increasing role of design and of questions of display in art since the 60s serves as one indication for the need for a new conceptualization of the relation between art and general notions of socio-economic and theoretical abstraction (see the contribution by Ina Blom).

The present-day “boom” of the art market and the concomitant constant reports of record-breaking prices that are apparently disconnected from hitherto relevant criteria of value speak to a new level of abstraction and therefore pose a decidedly different task for art criticism in thinking about the current meaning of this term (see the contribution by Isabelle Graw). Now that contemporary art is used as an asset in diversified investment portfolios, how can one conceptualize the connection between reflexive artistic procedures and the heightened level of abstraction to be witnessed in the realm of financial speculation, which becomes increasingly detached from classical ideas of industrial means of production in capitalist society? (See Melanie Gilligan’s contribution.) Meanwhile, a number of artists use elements from modernist abstraction as well as diagrammatic idioms and forms of “pictorial statistics” to decode the contemporary global political economy (see the contribution by Alice Creischer and Andreas Siekmann).

Investigating abstraction both as visible form and as hidden social structure, both in art production and in the increasingly “culturalized” economy in general, this issue of Texte zur Kunst tries to go beyond established art-historical and critical parameters by exploring and exploiting − rather than negating − the specifics of modern and contemporary art production, distribution and reception. In an adaptation of Gerhard Richter’s and Konrad Lueg’s “Leben mit Pop” we ask what it means to live with, and indeed in, abstraction.

Since March 2006, Texte zur Kunst has been making all contributions to the main section available in English for a non-German-speaking audience. As in previous issues all reviews originally written in English are published not only in German translation but also in the “English Section”. 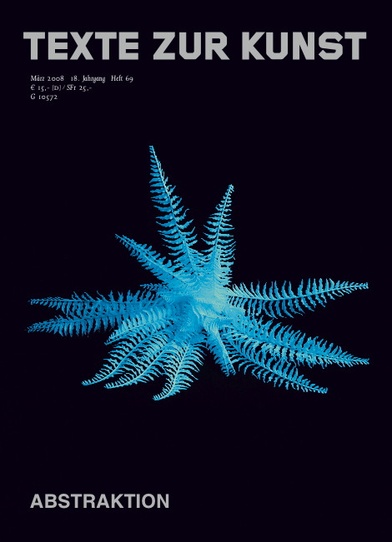