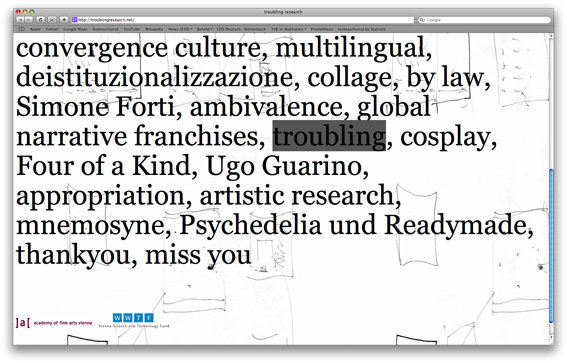 “Troubling Research. Performing Knowledge in the Arts” is funded in the framework of the Art(s)-and-Sciences Programme for which the Wiener Wissenschafts- und Technologiefonds (Vienna Science and Technology Fund, WWTF) [1] has made calls twice in the past years. The research project confronts the individual, often disparate practices and perspectives of various artists and theorists with each other in order to analyse the specific problems created by the clash of paradigmatic assumptions and methods. In “Troubling Research“, self-reflectivity, an essential moment of present-day artistic and scientific work, is combined with the claim to critically encounter those institutionalised models of artistic research that have evolved in the past 15 to 20 years in the context of the British, but also Continental European educational landscape. The main challenge of the project consists in directing attention away from the description (and thus the possible solution) of a problem to the process of problematisation itself. This is initially performed based on an historical examination of concepts such as “research“, “science” and “knowledge production” in the context of modern, post-modern and post-Conceptual art practice. Along these lines, Tom Holert investigates the genealogy of the concept of research in post-war art, with a special emphasis on the 1960s and 70s with the aim of historiographically complicating the currently rather ahistorically led discourses on the establishment of artistic research. Diedrich Diederichsen draws attention to the punk fanzine that was renamed from Search&Destroy to ReSearch, and in this context to the question of how dissent is presented and organised between different works and aesthetic strategies. The research contribution by Carola Dertnig focuses on the specific method of artistically researching performativity in the context of the Judson Dance Theatre in New York between 1962 and 1964. In fall of 2010, a symposium and a workshop took place with the American choreographer Simone Forti and students of the Academy of Fine Arts Vienna. The artists’ group gangart, consisting of Simonetta Ferfoglia and Heinrich Pichler, chose as their point of departure the Italian anti-psychiatry movement of the 1970s and in particular the work of the artist Ugo Guarino, to assess their institution-critical and participatory approaches and set them in relation to current trends. Stefanie Seibold’s work deals with the performances of Gina Pane, whereby she mainly examines the significance and accessibility of (picture) archives, the interpretation of their contents and the production of meaning through selection, display and re-staging. Johannes Porsch transposes the discursive field of texts based on Edgar Allan Poe’s “The Purloined Letter“, from Jacques Lacan and Jacques Derrida all the way to Barbara Johnston, to a model for developing performative strategies. Axel Stockburger’s contribution focuses on the production of specific “knowledge” in pop-cultural fan communities, as they can be currently found in China in the cultural context of Cosplay [2] , anime and computer games. The research activities of the individual project partners are the subject of Johanna Schaffer’s examination. Based on interviews she conducted herself, she pursues the question of what the concept and programme of artistic research makes possible for the participants, and also what it obstructs and makes impossible. A line of flight resulting from this constellation of different cognitive interests and modes of production refers to the transformations and contingencies of self-reflection of the researching artists and theorists. At issue here is, above all, to gain a more precise, and also historically informed, understanding of the manifold relationships between artistic, theoretical, analytical, and scientific practices in capitalist knowledge economies based on varies examples. A further crucial point of the discussion is the question as to the significance of performativity in regard to the production, representation and dissemination of contents in the work of artists. The specific characteristics and the associated singularities of an embodied knowledge, meaning a knowledge drawn from bodily processes, is attributed a crucial role in the Troubling Research project. This debate takes place against the background of global, political and economical formatting trends that increasingly perceive and negotiate “knowledge” as a product along the lines of a cognitive capitalism. This substantially facilitates processes of standardisation and evaluation. Simon Sheikh [3] comes to the crux of the matter when he points out that there is a direct corollary between the apparent exodus from the art market via the dematerialisation of the art object and the re-entry of art into the economy of knowledge in the form of institutionally inscribed and thus valorisable forms of artistic research. With the recent establishment of new funding for artistic research in Austria [4] , which latches on to the transformations of the educational landscape substantially promoted by the Bologna process, and in particular with the funding of “Troubling Research” in this framework, the relationship between art and research, aiming at institutionalised economic valorisation, becomes a crucial issue. In our context, “troubling” also means upsetting the respective practices and their conditionalities in order to set them in motion in relation to each other in such a way that precisely those fine break lines are revealed, which are gradually being concealed – and thus seemingly dissolved – by the institutionalising tendencies at the nexus between art and research. This mainly pertains to the question of, firstly, distinguishing, and secondly, assessing and using scientific and artistic methods – and thus the self-understanding of the actors in regard to disciplines and disciplining. In this manner, one could evade the proliferation of disciplinary attributions that Sarat Maharaj called “method fever”. [5] A “troubling” of research (in science and art) also implies making Rancière’s notion of “indisciplinarity”  [6] productive in the sense that the practices of apportionment and épistémes are indeed staged in a performative way and thus brought closer to the bodily and critical-analytical knowledge that originates in and is at the centre of artistic, theoretical, analytical, and critical practice. The results of this practice can be followed on the TR Blog [7] and will lead to an exhibition at the Academy of Fine Arts Vienna as well as a publication planned for November 2011.