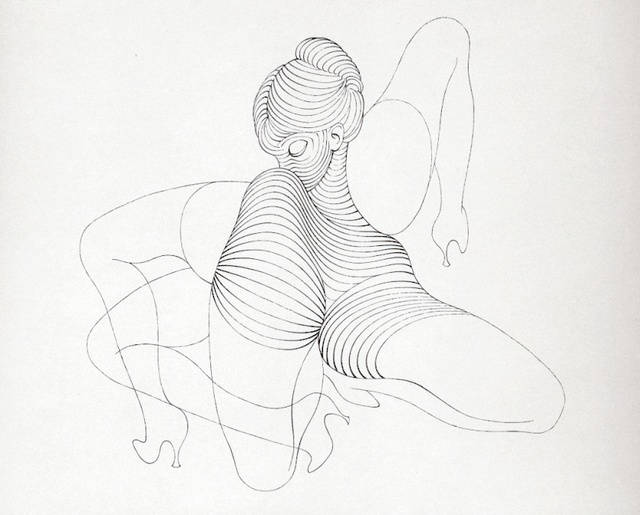 The millennium’s child holds her head in her hands – not out of grief, but fascination – an external cognitive synthesizer controlled by touch. But what happened in the moment body and head were severed? And looking back at the body anew what does the head now see? What occurs in the space where the head once was?

In the following essay, which we’ve taken as the prelude of this issue, London-based musician Alina Astrova considers the millennial subject, finding the correlation between body and identity rewired.

In his ongoing attempt to “redeem the body […] from the condition of addiction, or subordination to the word-become-flesh,” [1] Michel Serres defines the present digital revolution of language by the fact that not only our knowledge (already emancipated by the advent of printing) but also the operating system used to process it is externalized into the computer. In the space of the head, he writes, there is now an absence, a place for “inventive intelligence.” His headless subject is Thumbelina, a code name for the millennium’s child: “anonymous, […] but individuated,” “not a quantity […] but rather a quality, an existence.” [2] Reflecting on the way new technology allowed for the development of a new kind of mind, Serres wonders why our behavior is still informed by outdated frameworks: how come we have “not perceived the arrival of the contemporary”? [3]

Serres’s faith in the revolutionary potential of technology to emancipate inventive intelligence brings to mind early twentieth-century enthusiasm for the future of music brought on by the arrival of the electronic amplifier, which made it possible to comprehend the phenomenon of sound as separate from the act of orchestral performance. Italian composer and pianist Ferruccio Busoni wrote, in 1907, of a liberated music that “floats on air.” [4] When composing “Jeux” for Diaghilev in 1912, Debussy imagined an orchestra “without feet”: “Not that I’m thinking of a band composed exclusively of legless cripples! No! I’m thinking of that orchestral color which seems to be lit from behind.” [5] The outcome is a significant late work of Debussy’s, notable for, alongside other aspects, precisely this orchestral color – the quality of a musical sound, or in other words, the timbre. It is in regard to the incorporation of timbre in the process of composition that Pierre Boulez considered this piece an example of “orchestral-invention,” as opposed to what he called “orchestral-dressing.” [6] Foreseeing the logic of sound synthesis, Debussy conceived of an orchestra operating not as a collection of instruments employed as embellishments, but as an expression of its own quality. Thumbelina-as-existence echoes the modernist idea of orchestra-as-quality; Serres’s headless subject reflecting Debussy’s legless band. 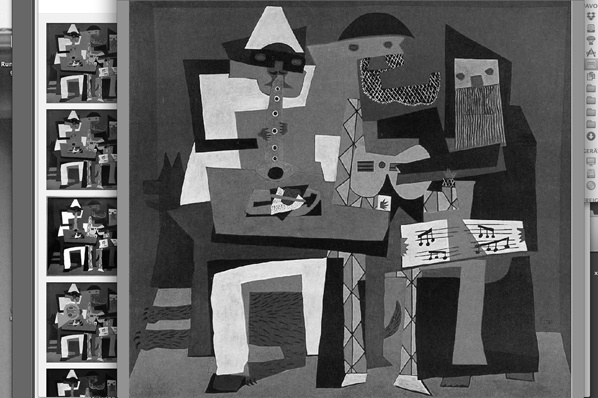 Arguably, orchestral-invention in “Jeux” was mainly limited to an intention. [7] However, the fact that Debussy, from the confines of his situation, could even imagine the possibility of a legless orchestra is important in its prescience. Decades later, the realization of his ambition was enabled by the popularization of the synthesizer, which accomplished the freeing of timbre’s production from the bodies of live instruments. The potential for expressing the being-as-quality of musical sound was utilized with house music’s total abandonment of rock’s performative characteristic, which was still somewhat embedded in preceding disco and electronic music of the 1970s. [8] Having satisfied Debussy’s prophecy, the minds of house producers of the 1980s were already irrevocably turned towards the twenty-first century, where, in the darkness of a club, existence could no longer be enclosed in the body.

Looking for Paradise Garage today, Thumbelina finds hell’s basement, a vintage shop where futuristic experiments of the past are compiled into identity banks from which the contemporary producer chooses ensembles. The preoccupation with obsolete frameworks, bemoaned by Serres, is evident in the recent revival of the synthesizer. The renewed interest in these machines seems to have emerged from a realization that the motion set free with the achievement of sound synthesis – a move beyond modernism, and towards club culture – had, with the advance of digital technology, been exposed as limited. The exploration of computers’ potential inevitably outlined the constraints of technology that preceded it, triggering, in turn, the desire to reclaim its status. It’s as if, by reviving the moment of surpassing modernist values, postmodernist ideals could somehow be fortified against the loss of agency they would subsequently experience. This quest for a freedom-lost is a process by which precisely what was free about that time – its readiness for the new – crystallized into an icon; the synthesizer-as-model. To turn it on now, to let it run, is no longer an act of liberating existence from the body, but one of nostalgia for the very possibility of such an act, at a time when computers’ own potential is coming into question. 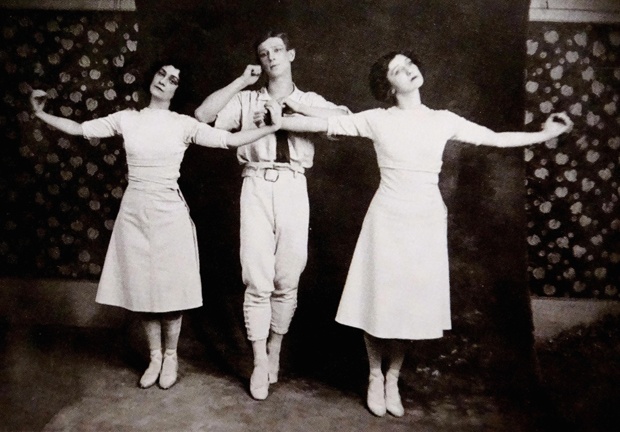 What today’s producer looks for in the synthesizer, Thumbelina seeks to find in her own body. She is holding in her hands the gadget into which her head has been shed. As she stares down and passes others who are equally engaged with their phones, torso and limbs replace faces as means of identification between strangers. Due to this new posture, Thumbelina herself – as if for the first time – encounters the rest of her body, becoming increasingly engrossed with it. She modifies it, starves it, exercises it. She is worried about the quality of the food she consumes, has health anxieties. She goes out to the club because of a renewed fascination in how her own and other bodies move. She makes use of it while she can, fully aware that opportunities are scarce. Feeling that machines outperform her physically, Thumbelina asserts the body’s significance as a site of identity. Her struggle is tactically supported as authorities calculate the power to be gained from Thumbelina’s insistence on maintaining the assignment of particular identities to specific bodies. If, traditionally, creation of social identities was the task of the state so as to allow its proper functioning, “enabling those who govern to know the governed,” [9] then the advantage of outsourcing this job to the governed has a two-fold benefit. Producing her own categories, Thumbelina submits to the illusion of empowerment, while at the same time making it more probable that she will adhere to them with more rigor.

While Thumbelina both produces and acts out the identity-body addiction to a soundtrack of isolation this feedback loop provides, the state reaps the benefits. The value of identity being directly expressed in the specificity of a corresponding body – trans, Russian, anorexic – makes for an equation of the former to the latter and, by extension, their interchangeability. It is by the logic of this interchangeability that the online information Thumbelina provides about her identity, and the struggles undergone to embody it, becomes data that can be used to locate her, physically, away from keyboard. Promoting the illusory premise that the increased sharing of this information constitutes increased collectivity – a sum of diverse parts that begin to imitate each other, forming various self-policing support groups – mechanisms of control accumulate increasingly intricate guidelines for profiling. In turn, this allows for the preemptive and indefinite management of the physical body in a time-space that precedes the application of law. Connecting disembodied identities online simultaneously works toward isolating matching physical bodies from each other offline. Where the image of the body is never called to appear, collective reality can only be expressed as a connectivity of the many identities that ornament the network.

Knowing that the democratic quality of an image – that which allows Thumbelinas to appear to each other, thus constituting a common reality – cannot be communicated within the limits of identity-become-flesh dependency, Serres aims to recover the body from its equation to identity. He does not attempt to overcome, suppress or expand identity, creating post-gendered bodies, de-gendered subjects, or cyborgs. Rather, Serres calls for a coding of identities – and so for disturbing the identity-body correlation. A code – that which “preserves anonymity, while permitting free access” [10]  – does not equate to a specific body, he suggests, but acts as a pseudonym for it. The experience of possessing such a pseudonym is compelling because it is available to everyone. What would be a music similarly expressed in code, like the pseudonym that breaks Thumbelina’s addiction? 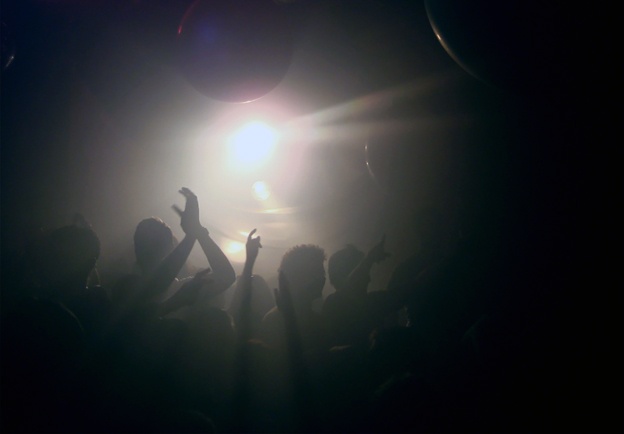 If it is to be read as an effort to restore a democratic element to the sociopolitical organization of the new digital order, then the pseudonym could act as a basis for Boulez’s proposed process of invention. Where dressing is employed as a strategy to stitch together static parts – the past achievements retrospectively immobilized into icons – in order to create an illusion of movement; invention becomes necessary when the aim is to reconcile parts that are in themselves dynamic. It is because the nature of the pseudonym is non-static – it produces motion between the general and the particular – that it lends itself to coding and invention as methods of political organization of collectivity, and resists dressing that is the outcome of profiling bodies into isolation. If Serres’s “Thumbelina” is approaching modernist ideas, then it is not through nostalgic reverence for static monuments. To treat modernism itself as a code, to put it in motion, makes it possible to access that which is expressed in the rise of any moment of change: the anticipation of the new which can only ever be carried by technology while not being enclosed in it. Like Debussy, the futuristic producer today may not be able to demonstrate the future, but she knows to keep the past’s merits and the present’s potential from stabilizing into statues she will have to carry. Technology in her hands acquires the potential to emancipate a place for unbearable lightness; for ethical action. 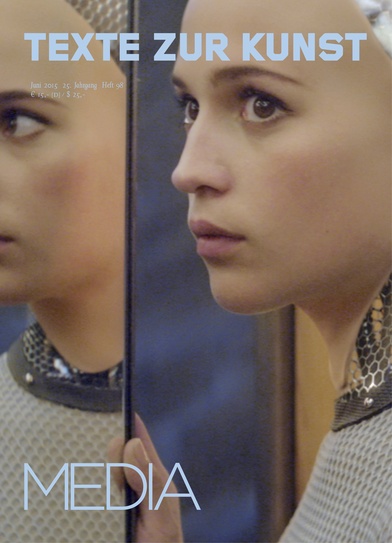