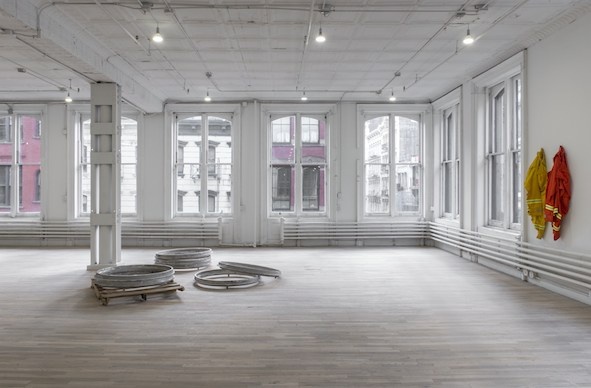 The U.S. system of mass incarceration is so sprawling, massive, and seemingly irreparable that social scientists often refer to their own struggles to represent it as a totality, rendering it in terms of a negative sublime. One might expect artists to refrain from even trying to depict the carceral state, or do to so in familiar humanistic terms. Cameron Rowland’s recent exhibition “91020000” broke with these expectations by opening with a conceptual work bearing the seemingly benign title “Partnership” (all works 2016). To execute the piece, Rowland initiated an agreement between the long-running New York venue Artists Space and a division of the New York State Department of Corrections called Corcraft, which employs prisoners at well below minimum wage in the production of various goods, ranging from roadwork equipment to office furniture, with the stipulation that these products can only be sold to other state-run or not-for-profit entities.

Rowland’s “Partnership” essentially consisted of a license – its number referenced by the show’s title – given to Artists Space (as an eligible non-profit) to purchase Corcraft goods. While in one regard this maneuver positioned Artist Space as an accomplice of the prison-industrial complex, it simultaneously registered the gallery as the state would an inmate, with a government-issued numerical ID. Through the ambiguities of “partnership” – a term all too familiar to post-Fordist discourse – Rowland complexly aligned the institutions of art with those of the carceral state, and also with a neoliberal ideology in which various types of coercion are often cast as “collaboration.” 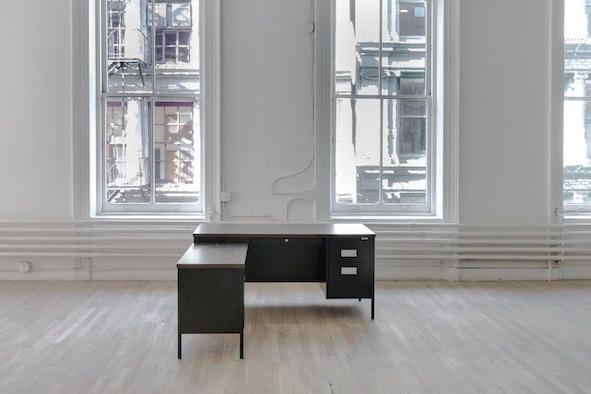 Economical, precise, and highly ambitious, this opening work concisely framed the rest of Rowland’s exhibition, which engaged an urgent set of highly over-determined sociopolitical problems. Viewers were presented with a spare, deliberate layout in which a small group of carefully chosen objects and documents aimed to connect aspects of mass incarceration with the long-term aftereffects of slavery, including the phenomenon of “re-enslavement” within convict lease programs during Reconstruction and after. [3] Such a venture was aptly timed, coming at a moment when criminal justice reform is finally appearing on the U.S. national agenda, partly due to the efforts of Black Lives Matter activists, and when Democratic primary campaigns have been punctuated by the renewal of debates over reparations. Given that prison populations have slowly begun to decline after decades of unchecked increases, present conditions would appear to hold out some prospect of change, however modest.

Part of Rowland’s intervention consisted of research, in the form of a distributed text that cited scholars, statistics, and case law to gauge the current dynamics of the U.S. prison system, outlining the dimensions of a crisis that extends far beyond the estimated 2.2 million people currently in U.S. prisons and jails to include the millions more who are subject to probation, parole, immigrant detention, and other forms of state control. This is not to mention the radial impact of these individuals’ lives, whether through broken families and depopulated communities, or the creation of a large class of disenfranchised, marginalized ex-convicts who are sentenced to a kind of “civil death.” [4] Other related issues have to do with the structural contradictions of mass incarceration, particularly those concerning its connections to neoliberal hegemony and to various modalities of racism. 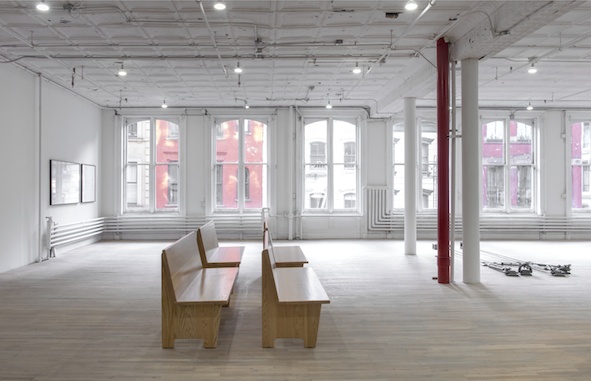 In contrast to activist artists who focus on effecting concrete policy changes through legally operative art (e.g., Laurie Jo Reynolds’s “Tamms Year Ten” project, which successfully helped to shutter Illinois’s state supermax prison), Rowland’s recent work develops a comparatively abstract, research-based approach that seeks to both analyze and alter the frames through which mass incarceration is perceived. Crucially, these frames are not only narrative or conceptual, but aesthetic. One key implication of this stance is that before we can reform or abolish the carceral state, we have to understand the ways it distorts its own perceptibility and intelligibility. Any effective intervention requires that we grasp the way these sensate biases determine public debate by predisposing a given public to certain kinds of action (or inaction).

It was with such aims that “91020000” sought to make the secretive economy of prison labor more intelligible. Rowland took advantage of the Corcraft partnership to create a series of sculptural installations from objects that the state effectively commissions for itself. Among the products-turned-artworks were the self-descriptive pieces “Attica Series Desk” and “Leveler (Extension) Rings for Manhole Openings,” along with “New York State Unified Court System,” a set of empty benches arranged as if in anticipation of some forthcoming verdict. Refraining from any conspicuous mediation of these objects, Rowland pre-emptively eliminated the opposition between the forced labor of the prisoner and the ostensibly free or redemptive labor of the artist. Freed from the demand to signify as technically refined art, the objects were marked by an emptiness that allowed them to assume a spectral character, conjuring coerced labor and the haunting of the liberal democratic state by its carceral double. Rowland further constrained the expected function of these works by keeping them off the market. Rather, in an arrangement that both blocks speculation and cancels the artist’s potential profit, the pieces for this show were made available only for lease at cost, with this price directly indexing the exploitation of prisoners’ labor, along with the savings this incurs for the state.

The remaining pieces in the show extended the prison analogy to address the persistence of the slave economy in American society after slavery’s abolition, focusing on select practices of the insurance industry. In a suite of three works, each titled “Insurance,” Rowland installed a number of large lashing bars of the kind that are used to secure cargo on container ships. He also obtained certificates from Lloyd’s Register, the still-operative British organization established in 1760 to help underwriters assess the risk of insuring ocean voyages, including many that facilitated slave trade. Whereas these works do not directly censure Lloyd’s or demonstrate concrete links between past and present, Rowland’s more trenchant piece “Disgorgement” does, making explicit that the American insurer Aetna (founded a decade before U.S. law forbade the ownership of slaves) issued insurance policies for human property. This practice – which expressly excluded death or damage inflicted by the slave owner – generated capital by objectifying human life, handling it as goods. As Rowland shows with Aetna, a robust present-day company, the residual value of slavery still exists within the fabric of corporate America, a point that is seldom made within mainstream discussion. Moreover, the implications of this stance resonate within the institution of art, as in the case of recent research demonstrating a correlation between slavery and the 18th-century discourse of aesthetics. [5] 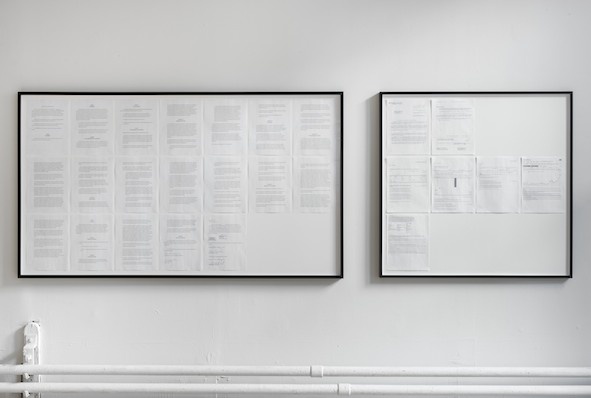 To make “Disgorgement,” Rowland worked with Artists Space to purchase 90 shares of Aetna stock, placing the assets into a non-profit trust. He then stipulated that this account will exist indefinitely, terminating only in the event that federal slavery reparations are paid – in which case the shares will be sold and the profits paid into the federal fund. Although on first inspection the piece seems to manifest the clinical dispassion of much institutional critique, its effects are considerably more ambivalent. As noted in the work’s detailed description, Congressional support for reparations is currently non-existent. The likely fate of the piece is thus not to effect the remediation it calls for, but rather to exist in a state of perpetual unfulfillment. Incapable of realizing its potential as a promesse de bonheur, art figures here instead as an incomplete restitution.

Such a compromised horizon indicates a decisive tension in the aesthetico-political orientation of Rowland’s exhibition. Generally speaking, “91020000” adopts a position that is largely consistent with recent progressive consensus, seeming to support reparations and prison reform while denouncing the sort of racialized criminal justice that has earned the name “new Jim Crow.” [7] Yet even as this narrative has a potent affective charge, it courts objections to which it is largely unable to respond. One thinks here of the ongoing debate regarding reparations, in which some have argued that such a policy would homogenize class differences among African-Americans while failing to call for a more radical coalition-based challenge to neoliberalism. [8] Other counter-arguments might turn on the fact that Latinos, poor whites, and women make up an increasingly large part of U.S. prison populations; or that prison laborers are less representative of the carceral state than unemployed prisoners, who are literally captive consumers for various enterprises. [9] Rowland’s work is strongest where it begins to register these problems at the level of its form, whether in the multivalent complexity of “Disgorgement” or in the contradictory status of the Corcraft appropriations, which make few demands aesthetically yet many conceptually, remaining at once inert and highly charged. In such instances, it is possible to grasp how research, art, and politics can complement, antagonize, and transform each other, and how such encounters might form the basis of future interventions.

Andrew Stefan Weiner is Assistant Professor of Art Theory and Criticism at the New York University.