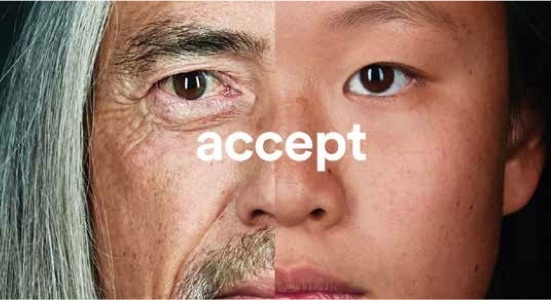 Seldom before in media history has news had a shorter shelf-life. In the weeks since Trump’s inauguration, day-old podcasts feel unlistenable, Tweets from a few hours ago, stale. One could argue that this rapid stream of political minutiae-turned-news is something to be resisted, a media fog orchestrated to distract.

And yet, this spectacle in the form of reality TV demanding to be treated as truth is the very site (at least, for now) of the political violence we are witnessing. John Kelsey takes up this territory, commenting on how it has become a pivotal site for corporate consumer messaging, too.

On the “America First” cover of Der Spiegel, a no-eyed Trump decapitates Liberty, a Medusa no longer emitting anything, just roofied. Now we’re seeing how Trump’s strategic emptiness allows him to become a medium unto himself – the President as channel – making all the other media go crazy in turn. But the forces that colonize him want chaos and crisis now; the real Fourth Turning is the way power, acting through Trump as host, engineers and dominates an epistemic disruption to outmode any former unity of or grounding within journalistic institutions, inaugurating post-truth politics. This is a truly Nietzschean-Dionysian moment in media erotology, a civil ratings war being waged via freshly weaponized communications in the continuously refreshed moment-to-moment of information hitting the eyeballs and brain. Meanwhile, death and irrelevance are the reward for those who still imagine that roundtables and chat rooms are places where something interesting and good can be unpacked and passed between sensate bodies. 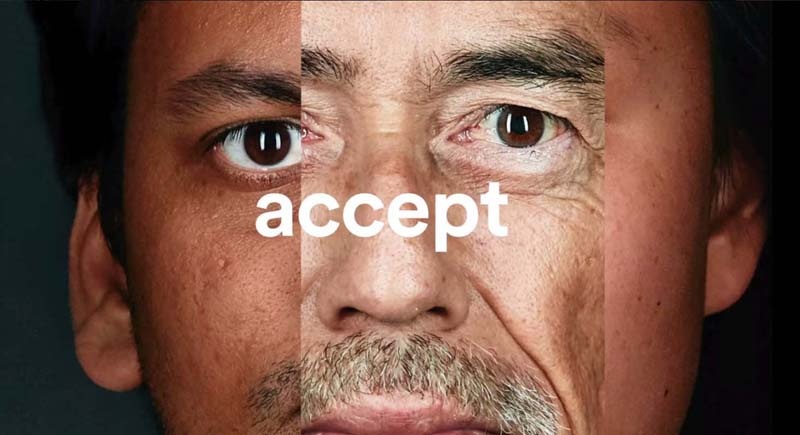 With “Pussy Grabs Back,” for example, we are still too stuck in Trump-speak, still in the zone he opened and has dominated since his Access Hollywood grab-talk leaked. And from now on he will only float and rise on such leaks, because that’s where the actual energy is. iPhone footage of Kanye’s show-stopping meltdown in Sacramento broadcast a paranoiac delirium clearly caused by Trump getting inside the other celebrity’s head. This was a case of channel Trump absorbing channel Kanye, experienced mainly via user-generated live streaming. Raging against radio, Google, and Obama, Kanye screamed, “It’s a new world Hillary Clinton, it’s a new world” and “This is a moment in the Matrix, bro, the vibes is back!” What’s Nietzschean in this stressed-out media environment is the realness of tweets, memes, and other messages drilling ecstasy and angst into living bodies that are basically designed for shopping. Tweets are the new eagle-speak, the only words getting through. An iPhone linked to a social media app and further weaponized with bot automation is both faster and more effective than anything now communicating via properly policed news channels. Fake or not, news is killing it on Instagram and other platforms, getting inside everyone’s heads ever faster as messaging becomes a weirder and increasingly targeted experience. It’s really not so much the end of freedom of the press we are experiencing in Trump-time but a phenomenon where this so-called freedom, under cybernetically engineered conditions of rapid cycling, turns against itself or is somehow neutralized at the level of the meme. 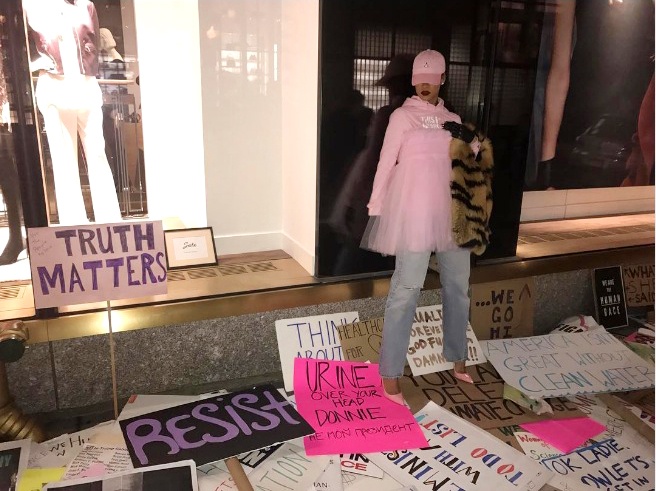 It’s an extraordinary time to be consuming the news that news itself is going crazy. Meanwhile, #deleteuber went viral following Uber’s seeming support of Trump’s travel ban, putting the pressure on every other Silicon Valley company to articulate something, anything regarding the state of human freedoms and rights. Under the threat of instantly losing masses of interconnected, tweeting users, the companies that made these flash-mob-like movements possible in the first place must now ensure they are messaging and repositioning themselves on a moment-to- moment basis. Media companies that count way more users than the number of voters for both US presidential candidates combined are desperately trolling their user base for ways to stay involved in the business of freedom: what’s important is the data we produce and leak in a fear-induced moment. Meanwhile, Meryl Streep’s emotional anti-Trump speech at the Golden Globes ceremony was nowhere near as riveting or well scripted as the Batman-esque vocally encrypted communications of Anonymous following his big win: “… it’s only a matter of time before humanity as a whole faces catastrophe on a global scale.” To deal with Trump we need to gather and organize at this point where media actually derails us. Like Kanye, we must transcend good performance and become deliriously medial again. The Guardian and New York Times critiqued Lady Gaga for lacking a message in her star-spangled halftime performance, but was her show any more or less political than Beyonce’s Black Panther-esque Super Bowl routine in 2016? Maybe the real question is not which diva articulated the better message but who wears medial delirium best? Singing a mash-up of patriotic standards against an apocalyptically gorgeous cityscape and then dropping into the stadium like an eagle-bug on a wire to sing about transgender monsterhood, Gaga is at least as huge as the weirdness of this moment. 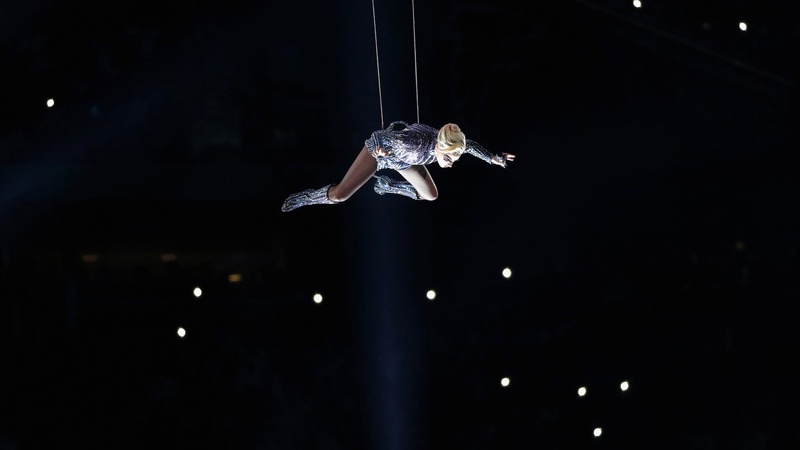 Meanwhile, as Lyft, Google, and other companies hustle to rebrand freedom in the midst of medial/political crisis, messaging itself becomes more weirdly charged with the task of humanizing the chaos. The other spectacle at Super Bowl halftime was pro-immigration advertising by Budweiser, 84 Lumber, and Airbnb, the latter’s #weaccept campaign – pledging to house 100,000 displaced people over the next five years – formulated by just-in-time logic and launched to social media just hours before kick-off as coverage of the sporting event started streaming on Fox. Having survived the crisis of reported racial discrimination within its own user-network, the $30 billion start-up was now promoting this virtuous/virtue-signaling initiative with ethnically diverse faces spliced together on a split screen. Meanwhile, the ad’s “we accept” slogan sounds like pure submission. Split-screen diverse monster face accepts what? The end of the world? And who is “we”? In their emergency ad, Airbnb concocts a message of #resistance confusing customers and disaster refugees. It’s an ad in crisis addressing a consumer in crisis, a mass email digitally hand-signed by Brian, Joe, and Nate (the company’s founders). Always personalizing its communications, Silicon Valley starts to feel as wholesome as Organic Valley, as homespun as Ben and Jerry. Articulating quaint sentiments of community and sharing against a backdrop of bombings, drone strikes, and mass displacements, Airbnb speaks to the potential refugee in every user of its network. Reading the ad copy, I was struck by the end-of-times vision of a world without homes or hotels, of global homelessness and all doors flung open, everything in common and everything lost. With #weaccept, Airbnb brands this mood now, hallucinating an algorithmically crowd-sourced community for the Anthropocene. And who is Airbnb really? It’s you, or the inter-activated, fracked network of yous. It’s not a home or a place, it’s the new reality of refugees looking for emotional connection in net-space as the world collapses all around us. And it’s not that the news is now suddenly fake, it’s that no world-bound story can match the story of the media themselves. Strange new forms are being tested every minute as news and advertising metabolize the very image of global precarity.