Upon first encounter, Mobile Cinema (2009), the linen and wood structure that filled the main room of Esther Schipper in the recent exhibition of the collaborative duo RothStauffenberg, appeared not unlike an oversized luxury beach cabana. Sitting in one of the lightweight, modernist wood and fabric armchairs arranged inside the structure, I faced a linen wall that served as a projection screen. The whole setup briefly evoked a feeling of “vacation” until I focused on the projected video, a densely packed, prismatic work in which historical and fictional narratives are interwoven in a manner that is at once rigorous and whimsical.

The installation’s evocation of both vacation furniture and a small, nomadic cinema echoes themes from the video’s two principle plot lines. The first of these is the history of the National Film Institute established in Mozambique by the Marxist President Samora Michel, following the overthrow of Portuguese colonial rule in 1975. Leftist filmmakers such as Jean Rouch and Jean-Luc Godard participated in the creation of films that were intended to be about and for the people of Mozambique. These films were driven to rural villages and screened publicly, a form of mobile cinema that served an educational and ideological purpose. The exhibition’s title is taken from Rouch’s description of his films as cartes postales, visual letters made for people living in areas where illiteracy levels were high. The second narrative in the video concerns the history of the Hotel Grande, a now defunct colonial-era luxury hotel in Mozambique that is presently occupied by more than 3,000 squatters. 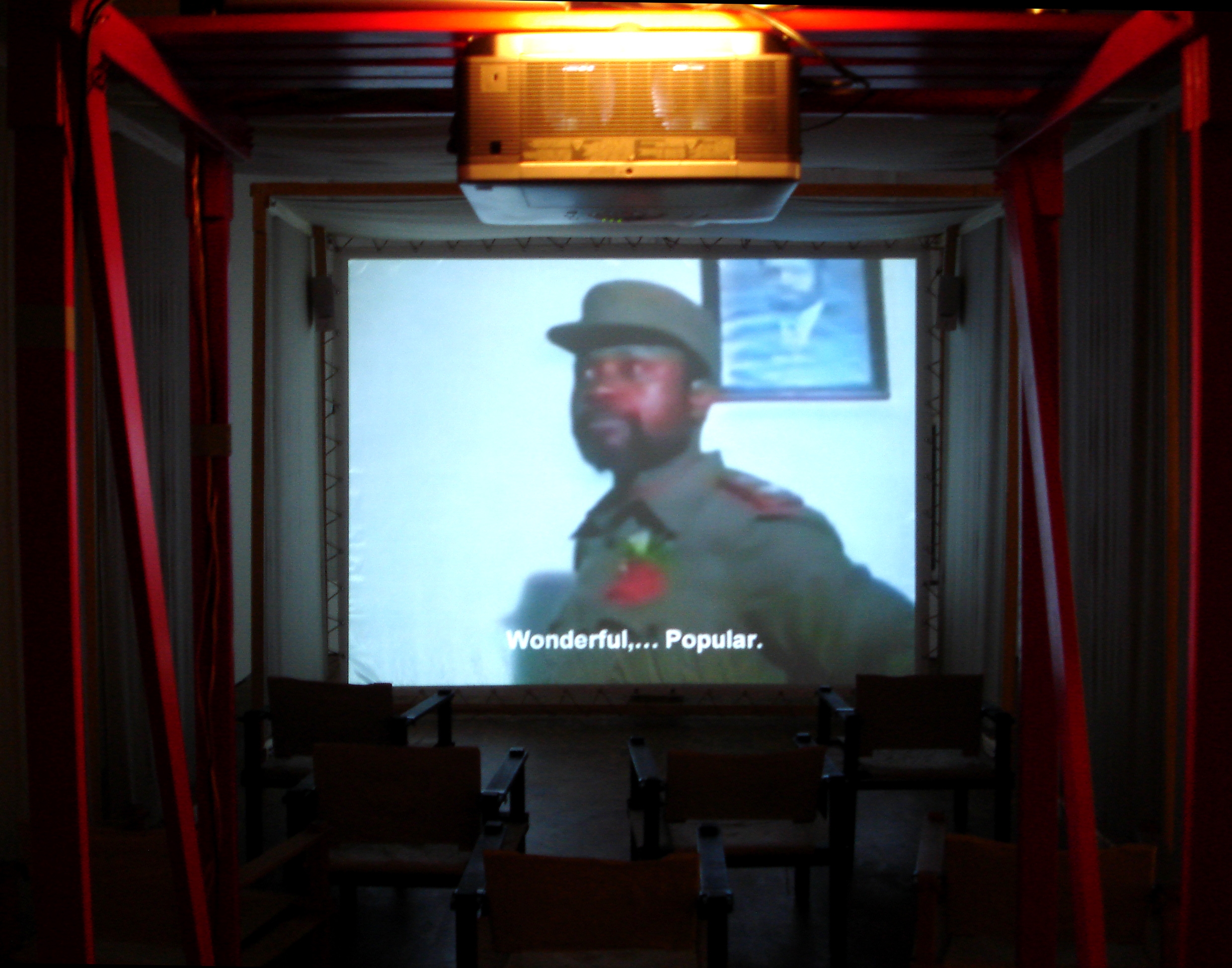 The video existed as an open-ended project incorporating approximately thirty minutes of footage condensed from RothStauffenberg’s earlier feature-length film, The Kingdom of Mozartbique (2007). The artists re-edited the projected video on a regular basis during the exhibition’s run. Thus, the viewer always only had access to a fragmentary work, a strategy that reflects RothStauffenberg’s approach to history and narrative as structures that are contingent, partial and open to revision. The artists established a kind of schizophrenic relay between archival footage relating to the histories of the National Film Institute and Samora Michel’s dubious death in a plane crash, shots of the Hotel Grande and its environs, and longer scenes of the squatters of the Hotel Grande dancing, singing, and acting out ambiguous scenarios. As they perform, the hotel’s residents wear a variety of masks and wigs such as Hollywood caricatures (a Bugs Bunny head, a ghoulish mask), kitschy baroque disguises, creepy dust masks and simple pieces of cloth with holes cut out for eyes. A multiplicity of voiceovers with various accents (European, African, American) provides divergent modes of commentary on subjects that tangentially overlap and create, like the montages of images, momentary analogies and dialogues. For instance, in one segment, a woman speaks authoritatively on Mozambique’s film history, a man identified as “Professor Mbembe” paraphrases Walter Benjamin, and an American man makes a series of swaggering yet lucid analytical remarks (“Marxists don’t believe in fiction, so it’s a lot of loud text and contextual discourses. Sobering shit. You look at it today and it’s all toxic. You know, history and cinema being the same material. That’s what a good mask is for, right? To be immune to history?”) Meanwhile, footage of Hotel Grande’s residents receiving and wearing masks plays on the screen.

Watching the video, one gradually realizes that the veracity and identities of the people speaking in voiceover are spurious. At one point the authoritative voice of a radio announcer states: “Our continued coverage of the nation of Mozartbique brings us to Beira, the second largest city of Mozambique, where the Grande Hotel stands as a testament of time.” The slippage from Mozartbique to Mozambique highlights the tension between geo-political reality and the semi-fictional “nation” evoked and described in the video, a nation comprised of the community of squatters of the Hotel Grande. The name “Mozartbique” anachronistically brings to mind the masked subterfuge and upended social hierarchies prominent many of Mozart’s operas, and excerpts from Le nozze di Figaro, Cosi fan tutte and Don Giovanni are interspersed throughout the video’s soundtrack. At one point a voiceover states, “The International Theater will present Le Nozze di Figaro, the classical story of the servant undoing the master”, a description that alludes to the reconfigurations of social roles that the squatters enact in the video. 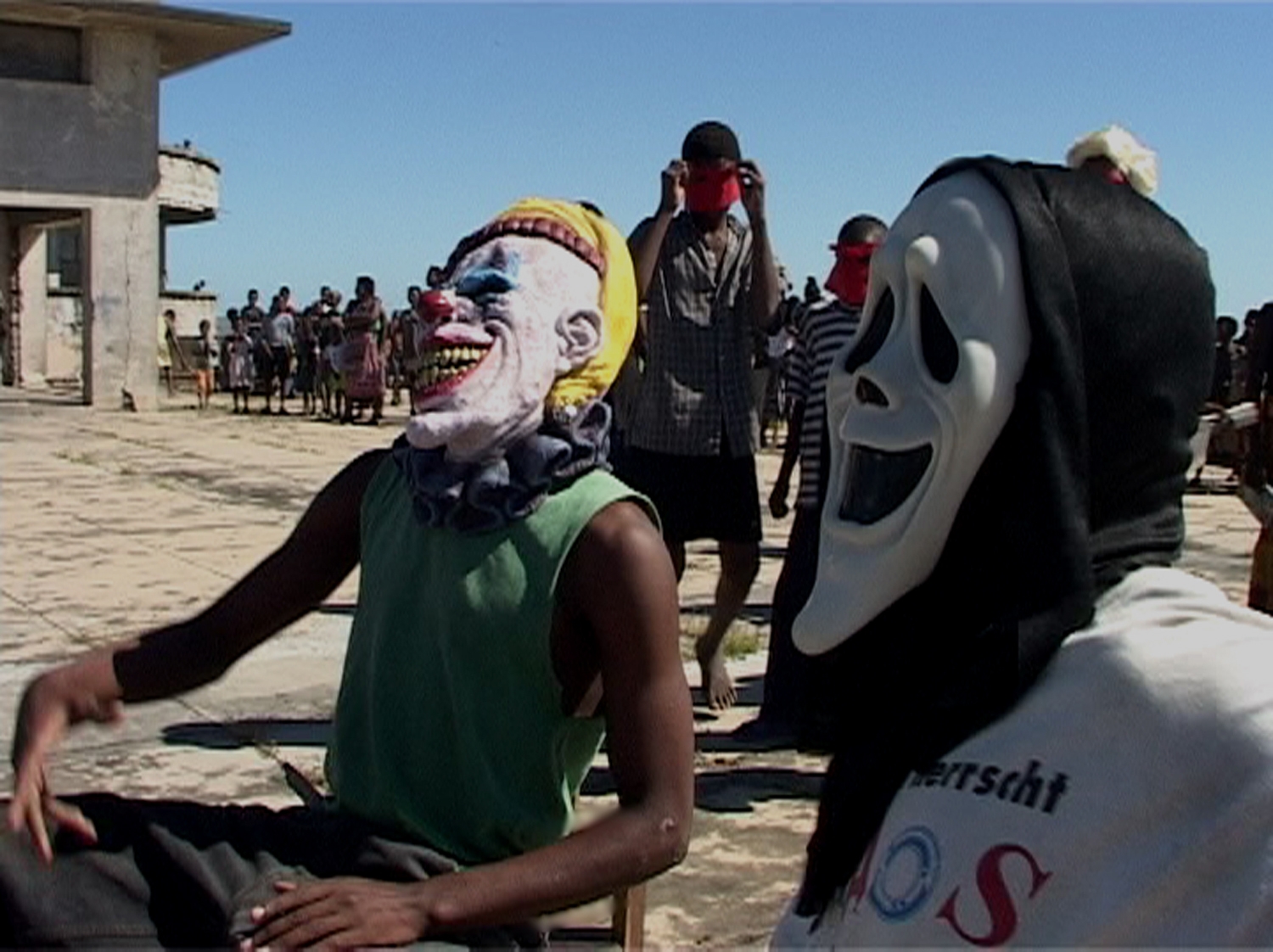 In a second room of the gallery, a copy of a limited-edition pamphlet was available for visitors to page through. The publication’s cut-and-pasted, photocopied pages evoked the aesthetic of ‘zines and political pamphlets. The layers of fact and fiction at play in the video are revealed in the pamphlet. The script is reproduced, accompanied by quotations from relevant theoretical and historical texts (such as Colin Ward on anarchism, Nelson Mandela on the death of Samora Michel, Roger Caillois on mimicry), stills from the video, and collages of visual material ranging from colonial postcards to a contemporary advertisement for mobile phone service in Mozambique. Turning the pages, one experienced the same engrossing discontinuity as in the video, the ambiguous and open-ended interweaving of history and revolutionary action with the legacy avant-garde practices (collage, montage) and pop-cultural attractions. Rather less convincing were the three plaster casts of an oversized wig in the shape of a flipped bob which hung from the ceiling of the smaller gallery, painted in candy-colored hues of yellow, red and white. These glossy wigs were reproductions of a plastic yellow one prominently featured in the video, in which the caricature of a blond 1950s-era hairdo worn by a modern-day young Mozambican woman generated a markedly incongruous juxtaposition. The exhibition press release claimed that group leaders in the Hotel Grande often opted to wear this particular “crown-like” wig. This claim, which seemed rather dubious to me (the wig circulates among a number of people in the video), raises the question of what the acquisition of one of these editioned wig sculptures might mean: a knowing, half-critical, half-slapstick confirmation of a collector’s privileged class position?

The Bakhtinian notion of the canivalesque—the idea that a temporary reversal of hierachical roles during carnivals or festivals serves as a means of maintaining social equilibrium—lurks in these wigs, as it does in the performances enacted by the Hotel Grande’s residents.1 As the camera romantically swept past yet another bit of the building’s derelict architecture or gazed at the sensuous dance of a young Mozambican woman wearing a cat mask, or as the untranslated dialogue left me to project my own interpretations onto the actions of the participants, I wondered to what extent this game of masking and disguise in fact maintains a certain unequal status quo. What are the implications of asking a community whose alterity and identity is already remarkable from a privileged, Western perspective, to perform as caricatures? RothStauffenberg are clearly aware of the thorniness of their scenario, the risk the project runs of a becoming a kind of fetishization. This discomforting ambiguity seems to have been inserted into the video intentionally and RothStauffenberg perceptively address the issue by calling attention to it directly, through their own bodies; the artists fleetingly appear in the video, wearing their own plastic wigs while filming, smiling awkwardly and playing the fools.