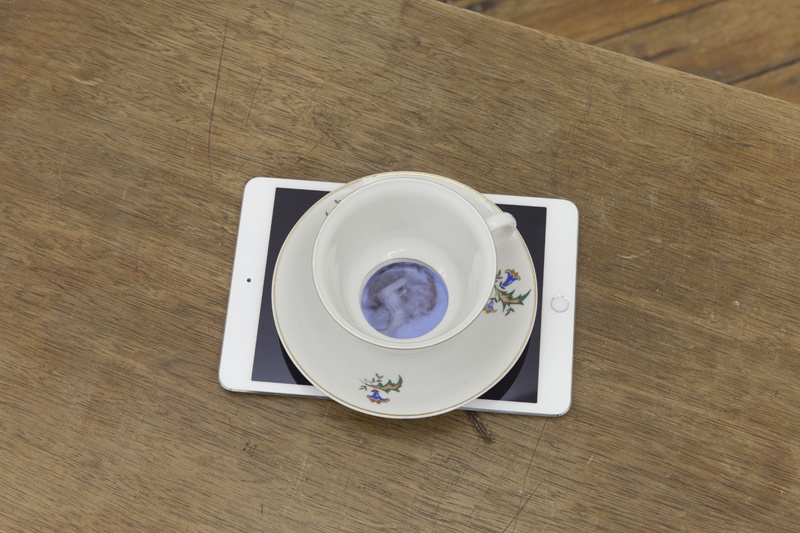 In its most reduced form, magic is like so much in the world of art: it is a way of framing, drawing a circle so as to make a clear division between what is inside and what is outside. Was this not what the modern picture frame did, which painting repeatedly employed until the frame itself was finally ingested, self-consciously, a desperate defense mechanism against the contingency of the modern world? In magic, the circle frames a particular space where things operate differently from those events and phenomena that lie outside of its demarcated realm. Differently, but perhaps also more intensely, with greater effect, with increased efficacy, where healing and transformation occur, sometimes simultaneously. With the domesticated modern work of art came a corresponding domestication of the magic circle, which new publics experienced readymade. What magic could transpire when the circle was already drawn, sometimes majestically, but never magically (think of the architectural wonders of the modern museum)? There is a long tradition (nearly as old as the modern work of art) of pointing to the fact that these new institutions that created and supported the modern work of art themselves were built on the backs of the disenchantment that Max Weber diagnosed exactly a century ago. Why, then, not summon a new kind of magic instead of repeating this claim over and over, a magic where divination grows up a little and sheds its cat bones for computer code? 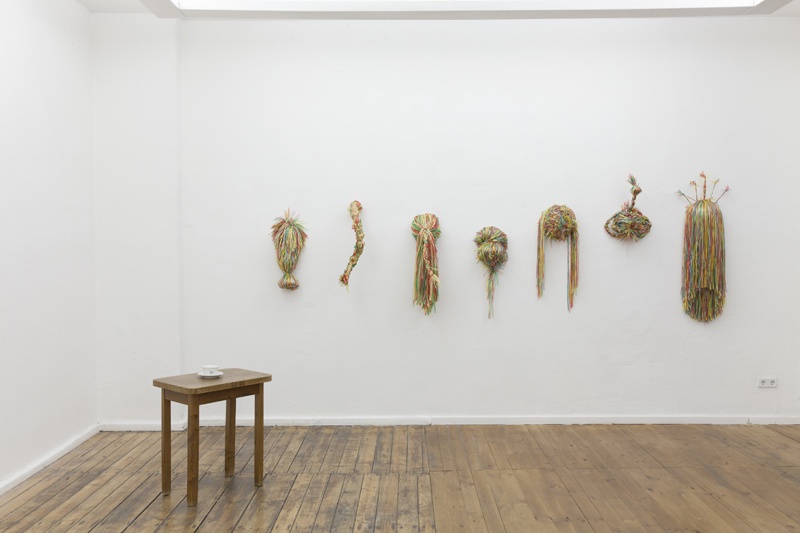 “Happy Unbirthday” at the little gem of a gallery, Eigenheim, in Berlin, put so much of this magical thinking on display, featuring an uncanny awareness of the historical uncanny. The exhibition was part of a series conceived by the gallery where one of Eigenheim’s roster artists invites someone to participate in a cooperative show; to join them inside the circle, in other words. For “Happy Unbirthday,” Moritz Wehrmann (the Eigenheim part of the duo), invited the Swiss artist Stephanie Hess to step inside the ring, and while none of the individual works in the show were the product of direct collaboration, the two artists were in constant dialogue about their respective production, all with a common goal in mind. But in the spirit of any good magic trick, Wehrmann and Hess focused more on the smoke and mirrors than any end result.

Inside of the three central exhibition rooms, there were, among many other stunning works: two tiny mirrors affixed to one another, a tarot card reading table, a black curtain separating two of the rooms, and, yes, a magic circle. The table and circle ("Performancerequisiten im Kreidekreis," 2017) were part of a magician performance and dance project, in keeping with the occultist themes, which connects to Hess’ prior training in dance and movement (movement, it seems, is the closest corporeal memory we have to the rapture of pagan ritual). Among the works by Hess were a series of gestures that have been systematized into typological sets that form the basis of two workgroups: an array of wall-mounted clay forms in shiny black glaze ("Figurationen: Situation 5," 2017), and a row of raffia-looking colored paper masks ("Figurationen: Situation 4.1," 2017) that occupy a wall of the first gallery at Eigenheim. The polychromatic collection appears like an ethnographic display, only the cultural origin of these specific ritual objects remains unknown. Resting on a table taken right out of a mid-19th century drawing room, was a small tea cup and saucer perched on an iPad ("Anna Rabica," 2017)—a perfect emblem of the show’s amalgam of historical and contemporary magic. Look inside the cup and what at first appears to be the residue of forgotten coffee is in fact a grisaille video of a dance performance filmed from above, silent but deeply evocative. Here the ultramodern tablet is put to the service of a new kind of magic, one which takes place at the juncture of technology and fascination, mediated by the restless body of an anonymous performer, stripped of color, improvising within the tiny space afforded by the antique porcelain. 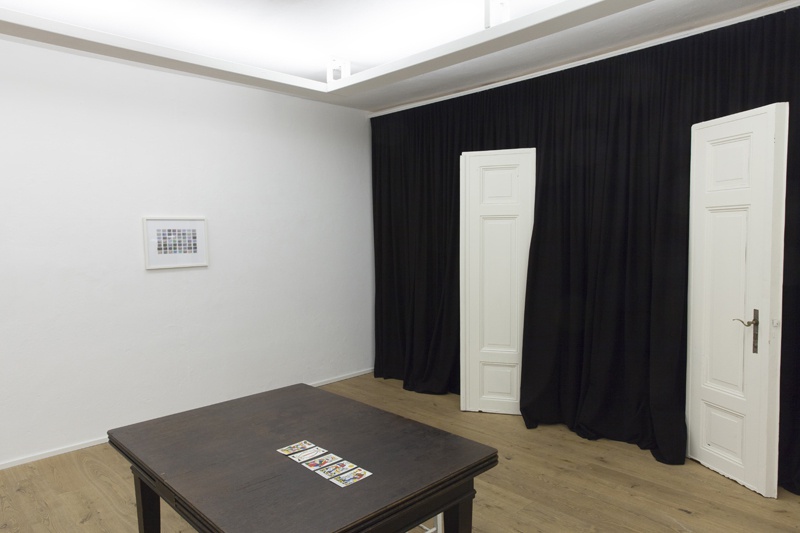 Wehrmann’s works engaged more closely with the functions of computer graphics and the semantic structures of language than with the gestural and performative echoes of the body, as in Hess’ contributions. In "flou" (2016), a series of prints comprised of manipulations of the seemingly infinite capacity for zoom resolution of a simple black square in Photoshop, Wehrmann pressed each rendering to the point where accidental flashes of color emerged from within the supposedly controlled operations of the program’s code. These brief moments of unintended effect are something like the last vestiges of magic in a world that is light years more “disenchanted” than the one Weber described; magic, because the glitch of the Photoshop universe offers hope (however fleeting) of a fissure in the façade of an otherwise totalizing algorithm of administrative tasks and functions. From the language of code to language in general, Wehrmann assembled a selection of letter stamps ("Language is a Blockchain," 2017), and placed a work of backward-written Lacan in front of a mirror allowing viewers to read correctly only by reflecting the text in the looking glass ("Objekt a," 2016). Mirrors are pushed to narcissistic extremes in Wehrmann’s impressive "Alter Ego" (2018), a flickering black light chamber in which two viewers (each on opposite ends of a table) sit across from one another with black capes draped over head, the chamber frenetically shifting between reflective surface and transparent window. The effect is one of near total ego erasure, as one’s own image begins to meld with the face on the opposing side of the apparatus, the product of Wehrmann’s intense research at the Collège de France beginning in 2010. 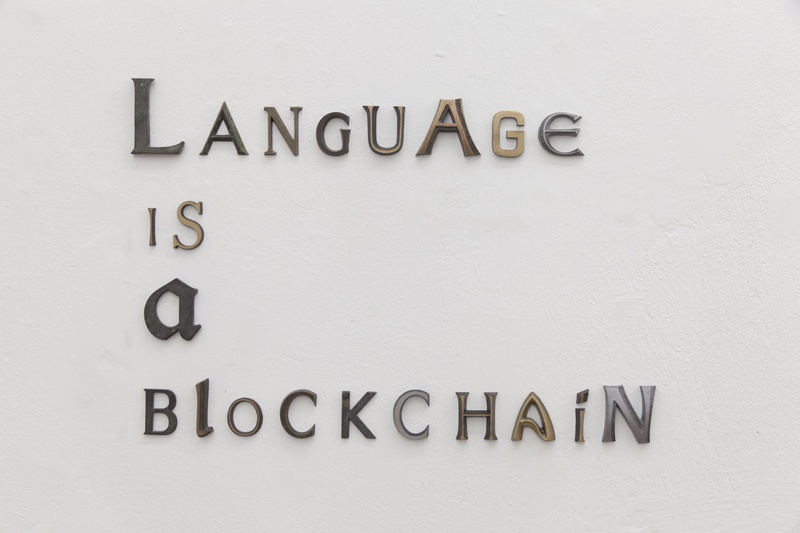 Moritz Wehrmann, "Language is a Blockchain", 2017

The lights went out (or maybe went on?) too quickly on Eigenheim’s elegant little freak show, though one hopes that other artists will follow suit and embrace the occult not as knee-jerk anti-modernism, but as a way to highlight the structural similarities that the occult and the cult of art have in common. In the bitter weeks of early 2018, those lucky enough to catch “Happy Unbirthday” were treated to a rare sighting of the supernatural in our digital age. What those of us who entered the magic circle witnessed was the forbidden pleasure of the untruth, which just like the celebration of an unbirthday, might have been the best medicine any witch doctor could conjure for that which ails the present.