An artist and entrepreneur, Alex Israel makes work that is notable for its clean-lined, coherent production. Yet, it is perhaps distinguished by the way it has been optimized for market circulation. For many, his un-ironic use of participatory and/or viral promotion strategies, embrace of celebrity culture, and direct presentation of his own likeness in his art, warrant dismissal from serious artistic discourse. Indeed, Israel’s is a practice that hews close to the asymptote of art and commerce. But its particularly clear reflection of neoliberal subject formation and communicational practice also asks the viewer/critic to update their understanding of where the site of meaning production might now be. Here, Israel discusses his position and recent projects with Texte zur Kunst’s Caroline Busta.

Caroline Busta: Who do you imagine your audience to be and what, currently, are some of the main themes of your work?

Alex Israel: Largely, my audience is the art world, but I do think about other audiences. So I also make commercial products, videos for the Internet, and public artworks. Right now, I’m making a movie for teens, “SPF-18,” and I plan to take it on tour to high schools across America.

Busta: Just as an aside, but logistically, how are you doing that? How are you choosing your network of schools?

Israel: I’m just starting this process, but I’m going to work with distribution specialists. There are booking agents who actually book high school auditoriums and gymnasiums across the country.

Busta: So you’re going through professional channels. It’s not like you’re asking friends of friends who might work at a school in Texas, say, and another in Illinois …

Israel: For the most part no, because I really want to go to places where I don’t know anybody.

Busta: It’s interesting how you aim to cultivate these different audiences: an art audience, the people who buy your sunglasses …

Israel: … Marilyn Manson fans, yes. Manson, because of the “As It Lays” video on YouTube. Yes, a lot of different audiences.

Busta: What was it about teenagers that made you decide to involve them, specifically, in this next project? Of course teenagers are this primary target market, but why was that interesting to you?

Israel: Well, they are this target market that everyone producing culture outside of art is working to attract. But also, I remember being a teenager and getting excited about art and wanting to learn more about it. I want teens to feel enfranchised by art.

Busta: I have to say that the selection of people that you interviewed in your “As It Lays” series was special for me because it included all of these stars from when I was a teenager: Marilyn Manson, Kato Kaelin, Christina Ricci. It made me wonder, to what degree are people a medium for you?

Israel: I guess sometimes people are like materials, just like actors can be materials for a director. I was thinking a lot about this while making “As It Lays.” There’s this famous quote by Alfred Hitchcock about how actors are like cattle, like meat – which is a very cold, harsh way of thinking about the Hollywood situation. Actually, my self-portraits derive from that moment in the opening credits of “Alfred Hitchcock Presents” where Hitchcock turns into a rendering of his own profile.

Busta: Right, your shaped-panel self-portraits. I also wanted to ask you why painting figures so prominently in your practice? How does this static, analogue medium relate to something like “As It Lays”?

Israel: I don’t really think of myself as a painter. I like to make all kinds of things that can carry meaning. I’m invested in the translation of meaning into object, and in the case of painting, into a flat surface that can circulate autonomously. But really, I’m open to all forms of communication – video, film, sculpture, retail products, performance, this interview …

Busta: That makes sense. Of course painting is the ur-canonical surface for transporting meaning across places, across generations. Can I ask you a question about another flat, communicational surface? How do you differentiate between the image of yourself that you present in an art-exhibition and the one you might post to social media?

Israel: I try not to distinguish too much between how I’d represent myself online versus any other context. In fact, just last week I shot and edited a video of my mom arriving at the Jewish Museum in New York to see, for the very first time, a painting I made of her. It was a total surprise, like a reality TV reveal. I posted the video on Instagram as a companion to the piece on the display. In none of these spaces, though, do I become a kind of stereotypical TMI-confessional-millennial. I like to share things in a measured way. I don’t want to overwhelm anyone’s feed.

Busta: It’s interesting how, with your recent show in Oslo, “#alexisrael,” you weren’t just objectifying yourself, but exporting yourself – as if half the point were to be able to see yourself from the other side.

Israel: I do love Instagram. I’m on it a lot. And incorporating its logic into my show just felt like a very organic way to work. Plus, I really enjoy the personal back-and-forth between me and the viewer over social media.

Busta: Yes, it seemed like a very contemporary way of handling painting, preemptively giving the hashtag – as one might for a wedding or a corporate event – so as to encourage the work to have a life in digital circulation. In the wake of all the rhetoric regarding “network painting,” we’re anyway always seeing painting in this mediated way. So “#alexisrael” simply builds in this vector of circulation as part of the work.

Busta: Interestingly, some well-established critical artists really take issue with precisely the ease with which your work moves through the system. Perhaps it’s because they see painting, ideally, as a medium of resistance … or at least find resistance to be a goal of painting and the point wherein value is produced. But so on a conceptual level – given that your painting is optimized for circulation, for remediation – where, in your practice, do you feel agency is created? 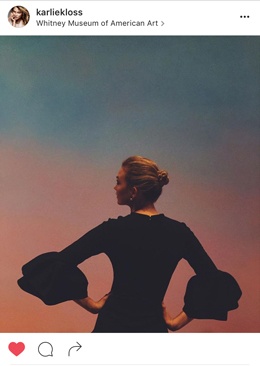 Israel: So these artists you’re referring to see painting as a form of resistance? I guess I just can’t see it that way anymore. I can’t think of anything that lends itself more easily to being absorbed and commodified within the art system than a painting, no matter what it looks like.

Busta: I gather it’s more that they aren’t up for reconciling the terms of their practice – painting or otherwise – with the coordinates you lay out; as if to do so would even out actual differences, and by that, critical potential for both sides. In their view, the act of refusal, of fragmentation, is more interesting; and that by not creating a link, it’s possible to resist the neoliberal conditions wherein conflict is smoothed over … or even becomes impossible. But how do you think your work relates to, say, older institutional critical practices – ones that harshly scrutinized the structures through which your practice circulates; which is to say the channels that you intentionally grease?

Israel: I’m not a punk. I don’t see traditional methods of rejection – rejecting authority, rejecting the market, the art object, the past, etc. – as a potential source for tension in my work.

Busta: But I think this negative reaction to your work is worth examining further – in that it points to the difference between, say, an established notion of an underground or bohemian space of resistance or, rather, the canonical strategy of institutional critique, wherein the artist aims to bracket the edges of institutional power; and then what came about with the connectivity of the web and its seeming transparency, the possibility of self-publishing, a strategy that involves just “being yourself,” embracing or even blending with the mainstream, acting within its channels.

Israel: I also don’t feel that there’s an “outside” anymore. I try to use our current forms and methods of communication as best I can. I don’t see the value in communicating a critical understanding of painting or Hollywood or entertainment culture because I feel, by now, that we all already know how these things work. We can log into Snapchat and see our favorite celebrities talking about what’s happening on set all day long. We know that reality TV is fake, that Kim ­Kardashian is Photoshopped in almost every picture; we’ve even grown to love Auto-Tune as a stylistic device in and of itself. It’s not my job to point to these industries, to reveal how they manipulate us, to be critical of them, or to fight against them. What’s interesting to me is how, against all better judgement, we continue to be entertained, to suspend disbelief, to follow, tag, post, ping, comment, like. What is it that’s holding our attention? What is the source of this magnetic magic, and how can I bring that into my art? This is where I begin to locate agency.

Busta: Ok, but if that’s the location, what, then, would you take the risk to be? I ask because in this issue we consider what it might mean or be like for this contemporary individual to fail.

Israel: Maybe there’s real risk in going down a path other than the accepted, romantic, adversarial idea of artmaking that so many people still want to hold on to? I might be deemed complicit, but there are apparently things about my work that are very upsetting to certain people …

Busta: True. The critique of your work is often that it’s so closely-tuned to the desire of the market and optimized for circulation that it can’t be differentiated from commodity. On the other hand, something in the work still refuses that status. Perhaps it’s because there is such a degree of banality to what you make, but also a beauty – and one that reflects contemporary aesthetic ideals maybe even in a “painter of modern life” kind of way. So the push-pull is dynamic. Can I ask you, do you think success, for an artist, can ever be a threat?

Israel: Yes, if one achieves success by attempting to “correctly” inhabit certain historical models, resisting the mechanics of our moment; that’s just conservative. Our time calls for multipart practices that employ perfect communication through, not least, the Internet and – particularly in the wake of recent political trends – ones that aim to reach an audience beyond art’s liberal, urban audience.

Busta: Which is what contemporary art does, by definition – embrace, and even make strange, our contemporary conditions and audiences. In this somehow Baudelairian light, perhaps we could think of failure as the state of submitting to a fear of engaging current realities; the choice to bull-headedly reproduce circumstances that no longer exist and then aiming to succeed by those measures?