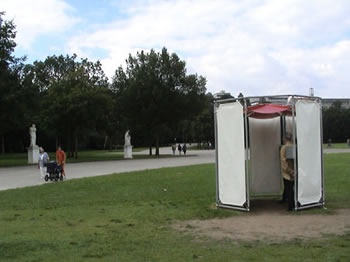 "Just as the world of a novel has an internal reality that can in no way be applied to the world outside it, but can be made more real, more alive in the imagination, by the application of knowledge from the outside world, so our "outside" world may contain nothing in it to explain a still richer state of reality beyond--while such a state, if we could only reach it, might explain so much more of this world and its reality." | (Brian Boyd, Vladimir Nabokov: American Years)

This Documenta in particular lends itself to a fragmentary reflection. No answers. No conclusions. Dispersal was its proposition. This was reiterated during the eighteen months of the public interface with the event in the form of five "platforms."1

What I propose is a heterogeneity of impressions and statements, beginning with Platform 1 ("Democracy Unrealized"), which was my first direct encounter with the event. From this point I will wind through some of my perceptions as a participant in Platform 5. I can use the excuse that my space here is too limited for a detailed analysis of the many threads which led to what has become Documenta11, although this is an endeavor I hope some brave, incisive and well-informed souls will attempt in the future.

At the time of this writing Platform 5, the exhibition, is still underway and not all of the (at least nine) publications linked to this Documenta are yet out. With the passage of time other views will be possible. Perhaps even some analysis might develop. Despite the desire on the part of the director Okwui Enwezor and the curatorial team (Carlos Basualdo, Ute Meta Bauer, Susanne Ghez, Sarat Maharaj, Mark Nash, Octavio Zaya) to stress the open-ended aspect of this project--a living "project" in contrast to a stable discrete thing--some decisions had to reach endpoints and some objects containing fixed texts (open to further interpretation and discussion of course) had to be established. In a way this seemed to be one of the interesting tensions in this Documenta, and it was reminiscent of a similar wish for flexibility and possibility proposed by Harald Szeemann for Documenta 5, I'm thinking in particular of the unwieldy looseleaf-bound publication. This tension also presented a certain mystery for many, including myself as a participant, about how to resolve practical issues associated with producing work - "immaterial labor" or things with volume in space.

"Doing" and "thinking" Documenta11 did involve uncertainty. Clarifying the invitation and following up on producing a work required diligence. No individual curator functioned as a contact person, but rather the production staff were the prime links to the process, which was strategically controlled by Okwui Enwezor at every level. The curatorial team seemed to function as a steadily working internationally mobile group united by a shared belief in the importance of the topics for creating dialogue and an unwavering respect and loyalty to Okwui Enwezor.

In retrospect when I review my correspondence concerning production I note my own nervousness at the shortness of time alotted for everything. But somehow, despite all doubts and fears, production took place, decisions were taken and the work successfully happened. This fact affected a shift in my perception of the event itself. When experiencing the exhibition I was reminded of the sense of being a part of a process which had been in the making, for example, in a variety of discussions in INIVA or the ICA in London, in the Volksbühne in Berlin, or in the Dia Art Foundation and in The Drawing Center in New York, and in assorted other places for over more than the past decade. It was possible to realize something imagined amidst the discussions concerning a broader view of what is important to acknowledge in the world. What I proposed was a combination of the wish for pleasure and a meditation of the varied attempts to imagine varieties of possible existences amidst the friction-producing and inescapable realities of life in our existing world. Questions which did spur this work were: Where is the place for examination of these imaginary modes in our lives? What rewards might they offer?

Without intending to be judgmental in a constricting sense, yet acknowledging that my selections here and what I chose to note already imply an amount of discernment, I will list these motley observations and conclude with more questions.

Boris Groys: Art as a minority. Skeptical of art coming out of it's minority status (i.e. information flows, etc.); give a possibility for the minorities to articulate themselves within this society.

Okwui Enwezor: Documenta 11 is beginning in Vienna, not as a subsidiary event, it was never his ambition to make an art exhibition alone, but rather it intersects other processes. Not cultural production, but the processes of cultural production. How do we transfer works within the international system. An art academy is the proper place to begin the integration proposed. Manifestation of the beginning of dialogue.

Sarat Maharaj: When introducing Stuart Hall: "I'm sure most of you students have read his texts."

Stuart Hall: From Gandhi quote also quoted by Wallerstein: "Western civilization? It would be a good idea."The art world remains an exclusive club. In terms of democracy, it's promises are too empty and too full. It remains a powerful idea which animates radical thought. Ideas are not limited to their place of origin, they change as they travel.

"Externally imposed themes, i.e. 'Democracy Unrealized,' in art contexts which attempt to situate themselves in broader (and specialized) contexts relevant to the theme. What about that? What is the raison d'être of this sort of event? Is it an "intervention"? How to see it in relation to previous events in the cultural realm, because it is using Documenta as it's platform, it's lure.

Now I've been invited to submit a proposal for Documenta 11 (the exhibition). How do I respond? Working with the class (in Vienna at the Academy of Fine Arts) on assessing or examining the history of Documenta and thinking about its current manifestations is like having a laboratory within which to test ideas."

The proposed octagonal units act as meta references to the conditions in which they are placed. A meta reference attempts to go beyond the denoted conditions of an event. They can exist indoors and outdoors, separately and in combination, dispersed or in tessellation. Their size and materials can vary. The contents can vary. The units can exist as armatures, partial or completed or as cladded. The primary standard is the octagon. The units exists as quasi-autonomous zones, affected by existing in the environment into which they are placed, yet they offer separate frames for perception, actual and metaphorical.

Standardized Octagonal Units for Imagined and Existing Systems (S.O.U.s) exist now in the Auepark and allow audio access to imagined places and momentary access to existing places. The empirical "evidence" (that of the perceiver) combined with that which can be and has been imagined form a circuit. The work consists of 8 octagonal units, one of which is on the lawn in front of the Orangerie in which it is possible to watch the DVD "Elsewhere?," which introduces the project and its various layers. The other 7 units are open octagonal structures dispersed throughout the Auepark and contain seating and a sound source.

Having witnessed and experienced the results of many travels F.A.M (freeagentmedia, Green's "label" and producer of Standard Octagonal Units/ S.O.U.s) felt it constraining to seek primarily empirical knowledge amidst the continued craziness manifested around the existing globe and decided to combine the awareness of existing systems (the world as we know it) with a deeper exploration of the vast storehouse of existing imaginary lands and cultures. These provided examples of other imagined systems spanning centuries. It was an idiosyncratic endeavor of a circuitous cast.

From these associations grew others which are linked to the notion of "architectural entertainments" and forms of architecture which have existed in garden settings, historical, commemorative and fantastic.

The beginning of Documenta itself grew out of a garden show. Revisiting the outdoor work produced at Documenta 6 , from which derived the notion of "structural behaviour," provides another aspect of the work.

Variations, recombinations, mutant versions of previous dream places reconceived for the pleasure and stimulation of now. Places of rest amidst imput. Places to focus on the sky and vegetation. The S.O.U.s recall these possibilities and exist for any interested perceiver. 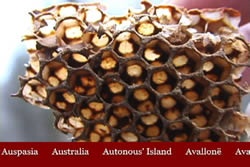 Who chooses what? Who has the power to represent? How do people get information and which people have more of it? To whom does Documenta matter now? Is a massive relativization taking place in pushing aside an analysis of the selected works (if indeed that is being done, publications are still pending)? Given the encyclopedic aims of this Documenta how is it possible to discern anything differently from anything else? Where can "value" be located and how might this be determined ? By each individual? But doesn't this contradict the premises for dialogue? What might dialogue bring? Can we hear each other? Might becoming more "knowledgeable" mean redefining the boundaries of what that means, even beyond the academic? Couldn't analysis be risked, rather than primarily collecting and juxtaposing works even if there is no conclusive "evidence" of how they might be read?

Although dialogue was espoused there was very little involving the process of selection of works, at least this was my experience. Perhaps it was primarily the curators and participants of platforms who were in discussion with each other. The context into which one's work would be placed was not disclosed until near the opening of the exhibition and the decision-making process for these choices was unknown. Despite the aims to cross and overlap territories the printed presentation of artists work was in a traditional catalogue format, with galleys unchecked by contributors before printing. When one thinks back on what was encountered in the exhibition when reading the catalogue, if one had the opportunity to visit it, one might wonder why couldn't seriousness be more serious? I found the exhibition to be an interesting attempt to overlap concerns from the other platforms with an attempt to introduce work not necessarily known by the broader audience, but in Platform 5 questions regarding artistic production today were oddly elided, yet rhetorically addressed as topics. Everything is "considered", yet the possibilities of a close reading of the specific aspects of work--and it's varieties--as forces for contemplation, questioning, pleasure and change seemed minimal. Perhaps the wish was that these perceptions flowed as an undercurrent of Platform 5, available for the viewers discernment. I didn't find that this rich area was sufficiently "sounded" as I attempted to go deeper into the works and I look forward to evidence that I'm mistaken in upcoming publications. 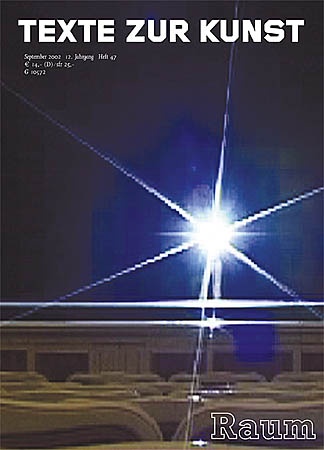