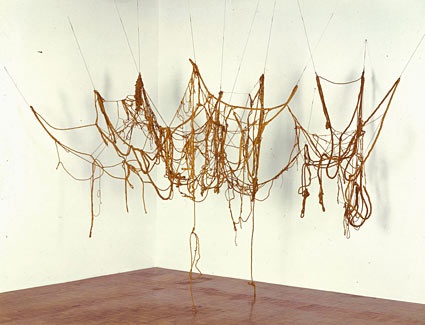 Despite all warnings of an imminent recession, the incessantly expanding art market remains in a “gold rush” – and enough artists are eagerly providing for the supply of transportable “art fair art”, additionally refined through the use of precious materials.

Against this background, the reliefs by the US-American artist John Miller, who combines banal quotidian plastic objects into amorphous assemblages, whose value is increased by finally plating them with gold, must appear as abyssal allegories of the persistent fetish character of art as commodity. But what exactly does it mean if Miller today substitutes the abject brown impasto he had been using to coat his conceptually related reliefs from the nineties with that glittering precious metal whose price development preoccupies the global stock markets?

John Miller, a Midwestern white male artist born in 1954 in Cleveland, Ohio, a poster city for environmental degradation and industrial built-in obsolescence, absorbed throughout his education the Protestant reductionism and Lacanian pedagogy of silence advocated by Michael Asher, and the unique and dry poetics of visuality within the conceptual art of Douglas Huebler. Miller distilled these influences into a stubbornly precise materialization of observations about the question of value inherent to conceptual art, and developed a singular universe neither afraid of images nor of extreme rigor. Miller’s use of objects and images hinges heavily on an alchemic transmutation of low culture and subcultural codes into concerns generally believed to be posed by high culture, namely how class and aesthetics interact to define beauty and the sublime. This quest has of course been at the core of American contemporary art since Pop art made it high culture itself, but Miller’s best work avoids a Warholian brand of Pop’s authoritarian slickness and apolitical machine-aesthetic cool in an uncanny - and often abject - return of the hand. Unlike in the work of his schoolmate Mike Kelley, a Catholic, Miller’s formulas are not crowd pleasing but obfuscating with their violent class humor concealed under an apparent and obscure simplicity. Miller exposes the unspoken and obvious economical relations that underpin the game in which he partakes, doing so with a straight face proper to Calvinist sexual repression, a sociocultural formation that desublimates sexuality to make money. He is both literal and lateral, an off-putting cult artist, quietly admired and supported by key artists of three generations, and largely left alone (until now) by the market and major institutions, perhaps for his own good. Miller’s critical reception is also somewhat hindered by his own stature as an artist-writer of the first order. It is hard to write about him better than himself.

In Miller’s last body of work Roman helmets, Uzi machine guns, handcuffs, swords, archetypal chalets, belts, other clothing accessories, cups, plates, bottles, remote controls, grapes, corn, diverse ornamental items, all in varied and contradictory scales are accumulated over the surface of wall reliefs, tables and plinths. These assemblages of assorted junk, looking not unlike the best of Chamberlain’s work, halfway between a white trash trailer park backyard and a child’s unrepressed imaginary in sync with the social aspiration of endless accumulation and ownership, infused with bellicose imperial and neoclassical content and mixed with everyday life objects, is all made of plastic. And painstakingly gold leafed. Should Miller have spray-painted golden his plastic debris, he would have weakened the allegorical value of the contradiction between refused and despicable goods and gold. His virulent critique of the artwork’s commodity status in these times of an exploding market, coupled with a seemingly endless and senseless war, also encompasses the fetishism of labour. Plastic, a derivative of oil, permitted the mass production of objects immensely rich in detail without the cost of handcrafting, allowing a proliferation of molded plastic doubles of “real” objects, gener­a­lly associated with play (plastic guns, cups, or grapes can coexist in parties or children’s rooms). Miller multiplies exponentially the exchange value of these cheap ghostly commodities made to be disposed not only by making them enter the symbolic machine of value construction of the gallery, but also playing on and exposing the archaic bourgeois desire for the unique, intensively laboured-on masterpiece.

“The New Honeymooners” is split into the second spaces of two galleries in a self-mocking critique of both the need for a mid-career artist to come up with a “definitive” show and the relentless expansion of the big galleries, to which he has access, in tune with the market. Miller also plays with another distinctive requisite of the aspiring “major artist”, the trademark. The work that brought him notoriety and that he abandoned more than a decade ago, was a group of similar reliefs covered with an excremental brown impasto. Freud maintained that, in the unconscious, gold and shit are interchangeable. Marx anticipated this linkage, noting that under capitalism the greatest work of art is worth so many tons of manure. By highlighting the equivalence between worthless feces and valuable gold Miller debunks the artistic myth of the early epiphany developed into a mature command of an idiom, a career trajectory that characterizes the patriarchal construct of the “genius”. Another psychoanalytical undertone to be heard in these works is the relationship between creativity and the infant obsession with poop. The gold pieces are equally infantile: a treasure chest, out of a pirate ship wreckage or an Uncle Scrooge moment in a Donald comic strip.

The two galleries-split is further complicated by specific elements: at Metro, where the works are tables and plinths you look down upon, the Winckelmannian sub-theme of Germany-as-Greece is explicit: if aesthetic beauty were to produce political harmony, we understand how everything went to hell with mass consumerism as the install takes a suburban twist with the addition of a “pastel” brown shit wallpaper on one wall, sporting a Greek meander pattern oddly coupled with the Munich golden baroque sensibility of the objects. An equally disturbing upper-lower-class aspiring to lower-middle-class insertion in the Petzel portion of the show, populated with equal-sized reliefs lined up in one wall, is a circular office rug of a purplish blue that looks just like a Staten Island wood-frame in a one family house’s plastic backyard swimming pool. These domestic elements recall Dan Flavin’s observation that art is moving towards the aesthetics of minor interior decoration. Flavin loved television, especially Jackie Gleason and the New Honeymooners. In an equally corrosive vein the titles of Miller’s pieces are taking cue from popular TV shows and arcane Minimalist art criticism’s phraseology. Deadpan and multilayered, direct yet highly encoded, beautiful but somewhat repellent, Miller’s new body of work is poised to make our gilded age eat its own shit.