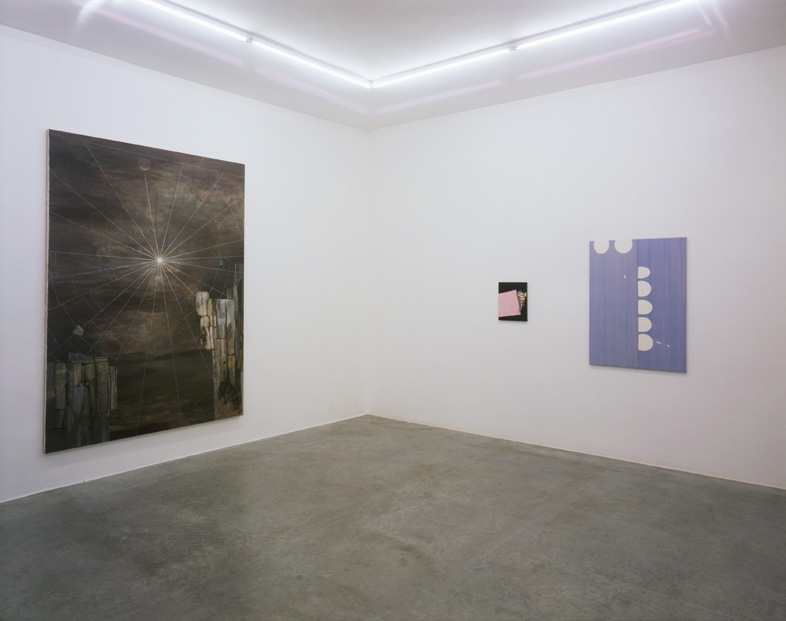 What was there to see? An equally intelligent and elegant exhibition showing new versions of the thematic complexes viewers have associated with Monika Baer at least since she participated in documenta 12. Once again, there were streetscapes, pictures of breasts, landscapes with ruins, as well as pictures of brickwork with luscious long lumps of oil-paint plaster, and spider-web works in various executions. All pictures had been completed in 2009. At once spot-on and offhand, the show appeared heterogeneous only to a viewer who did not care to look beyond a very first glance.

The interdependence between the individual work and the oeuvre as a whole has often—and correctly—been highlighted as a particular feature of Monika Baer’s artistic position. [1] The artist herself, too, maintains that such mutual dependence exists, describing it more specifically as an interrelation between the visibility of each individual picture—which, she claims with apparent unconcern, of course needs to be a “good” painting—and the invisibility of the complex of works. The oeuvre, we should note, consists of the works already in existence and the ways they are presented, as well as a part that, while not yet in existence, affects the order and perception of what is present by virtue of being anticipated—and “affects” here means more than mere complementation or completion of what is already there; the future oeuvre implies a reorganization of the part already in existence. It operates as a voyeurism of sorts that will assert its right to see something. Yet this gaze through the keyhole of the future knows that the spaces, motivations, forms of production, and protagonists will have changed or at least shifted together with the conditions of observation.

The concept Monika Baer’s painting plays out is fascinating and irritating in equal measure. We can recognize in it a convincing critical economy in an age defined by the dictatorship of imagery and the imperative of visualization; but first and foremost we must comprehend its radical acknowledgment of the imaginary. In psychoanalytical terms, the imaginary is that dimension of the human subject which must be understood on the basis of the irrefutable effects it has on the real. The imaginary is not a private factory of illusions; it cannot be dismissed as deceptive or compensatory fascination and mere seduction. Since the imaginary is always already connected to the symbolic order, it feeds on the familiar stories—in Monika Baer’s case, on art, culture, and popular culture. Its data can provoke both critical and affective readings and revisions, including a certain kind of feminism and unabashedly subjective investigative predilections. For narcissism—it, too, is part of the imaginary—is accompanied by aggression.

The most obvious scene of the imaginary is the body, imagined as a whole, complete, autarkic entity. Against such an imagination of wholeness, Monika Baer produces partial objects—most importantly, numerous breasts, a subject to which I will have to return. [2] Subdivided and circumscribed by language, not by experience, the pleasure-giving qualities of partial objects, according to psychoanalytical theories, conceal their bodily functions. Besides quoting such partial objects in representational depictions, the painter uses the structural principles of similarity and synthesis, which are no less in league with the imaginary, in such eccentric fashion that the wholeness and homogeneity given in the imaginary ultimately disintegrates, to be sublated in a personal iconography composed of elements and methods of combination applied discontinuously and heterogeneously. The English expression “body of work” (the German equivalent, Werkkorpus, sounds antiquated) is suggestive: Monika Baer nourishes her oeuvre the way her pictures of breasts, the older ones as much as the most recent ones in this last exhibition, shoot their milk like a projectile rather than leaking it drop by drop. Even if the shot is not aimed at a recognizable aim, as an aggressive gesture that pokes fun at certain traditions in painting, and the persistent gender-polarizing readings of these traditions, it is right on the mark.

There is, in short, nothing painting cannot do. Against the so-called reality and the register of realism that is, the fiction goes, the only adequate format of its representation, painting posits the fantastic: it turns breasts into activists and devalues banknotes (“Ten Dollars in a State of Disintegration,” 2006). In pictorial signs such as breasts, money, or chains, the alienation on which the imaginary rests gains objective contours. We no longer see the proverbially bare breast, pure and sublime. Rather unanatomic in shape, the white circles with their red nipples are apparent in their function as screens of psychosexual projection.

In other variations on the theme, a row of breast-like shapes projects from a seam into a washed-out blue surface. The color and a sewn, non-mimetic twin seam—it is raised, rendering the breast only the flatter—recall jeans. Still, the watercolor glaze is positively tender to the robust piece of apparel. Jeans pants had clothed men for more than a century before the first women’s jeans came on the market in the 1950s in connection with the key role the fabric played in the youth protest culture. Monika Baer’s breast pictures seem to sew the history of the body into that of culture, but also the miraculous titty into the economic miracle. The manifestations of these combinations were historically perceived as equally concrete and abstract, between Marilyn Monroe and the ascendancy of a gestural-abstract style of painting that Pop art would soon irreversibly oust from its position of cultural hegemony.

Yet in connection with the web as a structure and motif—a newly developed element in Monika Baer’s oeuvre—the breasts bring the question of the eye-catcher into play not only on the symbolic level. The pious and squarely bourgeois idea of Maria lactans and hence of the doting and nourishing mother is upended when a spider secretes fibers as sticky murder weapons through its spinnerets connected to silk glands, literal relatives of the female organ. Moreover, a systemic analogy obtains between the spider’s use of her webs and Monika Baer’s deployment of pictures. The spider eats its own web after a successful hunt in order to build a similar one in another location. The structure, then, is always already present, to be materially realized from instance to instance.

Accordingly, the small-scale web works loosely scattered across the exhibition operate on the principle of repetition in variation. Two of Baer’s compositions appear multiple times, one twice, one thrice: details of a spider web. Cut into the stretched and painted canvas, the web leaves nothing but a few narrow staves on the edge of the painting. The wooden stretcher frame visible underneath not only emphasizes the work’s physical frailty and the precarious balance between laying on and uncovering; it also creates an oddly corporeal nakedness: a pink monochrome with a run in a stocking and the anticipation of the post-coital smoke (“monochrome,” 2009), for a filter cigarette—and cigarettes, too, are a familiar part of Monika Baer’s motivic repertoire—loosely rests on the top edge of the picture. Between the small coin of eroticism and fetishism, a conceptually perverted post-minimalism comes into being. We reencounter the voyeurism described above, which has now turned its attention to (the history and elements of) painting.

And somehow Monika Baer’s painting ultimately convenes with the rhetoric of nineteenth-century upper-middle class culture, which skillfully turned the ruins of Romanticism into florid interiors and was desperately looking for new models of visibility and symbolic equivalents for its affect-laden imaginary. The Enlightenment and Romanticism had bestowed a new historical consciousness and a different awareness of the subject on the age. Fairy tales had become a matter of the nineteenth century, as had vampires—they, too, the subject of an entire series created in 2007—hysteric women, the ghost story, psychoanalysis, the cult of genius, historicism. Veering between the trivial and the artificial, these currents celebrate a comeback in the fantasy genre, in the (sub)culture of Gothic, and in the perspectives of a fluid digital spatial aesthetic we think we can also recognize in Monika Baer’s pictures.

Just as the beholder believes she has grasped the potential radicalness of such constructions of analogy, of the parallel order that, by equating one to the other, suspends—or simply ignores—hierarchies and established orders, she already finds herself ensnared by the system of references. If we are concerned with chronology, history, and gender, the analogy is no longer the demon of the quasi-natural Roland Barthes warned against four decades ago[3]_ ; to the contrary, the irreverence of eclecticism demonstrates precisely the power of naturalization. That these pictures, in any of their painterly techniques, come across as hyper-aesthetic is as seductive as the beautiful and artful object that is—or so it appears from the human perspective—the spider web: any one of these artistic gestures, motifs, techniques may lead up to the lethal bite in the neck.