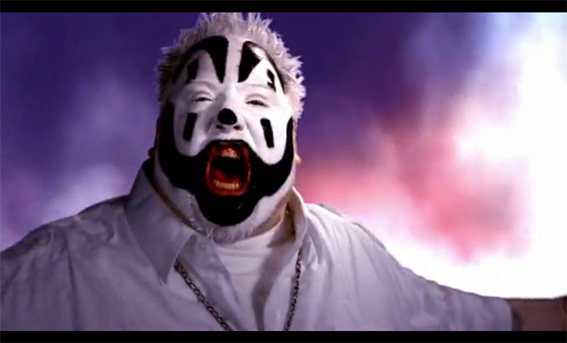 “Miracles” is the title of a 2010 song by Insane Clown Posse (ICP), an American horror-metal hip hop group. For over a decade now, Violent J and Shaggy 2 Dope, the duo that comprise ICP, have produced a steady stream of middling rap songs that glorify violence (1999´s “I stab people” and the 2000 follow-up “Still stabbin”), adolescent sexuality (“I stuck her with my wang” in 1994) and horror film grotesqueries (“Carnival of carnage” in 1992 and the classic “Amy´s in the attic” in 1994). They wear clown makeup on stage and in photos. Think Bruce Nauman´s “Clown Torture” (1987) performing in George Romero movies to a 4/4 beat and you´re close.

“Miracles” has been a huge hit for ICP, despite it expressing none of the usual lyrical theatrics they are known for. There are no dead bodies. No bitches. No one gets stabbed. “Miracles” is in truth a thoroughly religious song. A sample:

„Take a look at this fine creation
And enjoy it better with appreciation
Crows, ghosts, the midnight coast
The wonders of the world, mysteries the most“

The song goes on to list more things they are thankful for: kids, rainbows, pelicans and so on. It is a pop prayer for the glory of creation and by extension, the power of the creator that makes everyday miracles possible. ICP seems to have found God, or at the least, found praising God good for business. This is a typical shift for entertainers in the pop industry, especially in America, where the entanglement of religion, profit, and power is a venerable tradition.

For ICP, everyday things are miracles by their sheer existence. But the most miraculous things are those that exert a special influence over the course of our lives. Music, for instance:

„And music is magic, pure and clean
You can feel it and hear it, but it can´t be seen“

Music exemplifies what is most miraculous because it pushes and pulls us without physically existing. It acts like an invisible force: magical, otherworldly and seemingly beyond any human calculus. So do magnets.

„Water, fire, air, and dirt
Fucking magnets, how do they work?
And I don´t wanna talk to a scientist
Y'all motherfuckers lying, getting me pissed„

In “A warning against Vain and Worldly Learning” (1418), Thomas à Kempis takes a similar position. He writes, imitating the voice of Christ, “He whom I teach will swiftly gain wisdom and advance far in the life of the spirit. But those who seek curious knowledge from men, and care nothing for my service, will discover only sorrow”. For Kempis, empirical knowledge sullies the divine and diminishes the glory of God, which weakens God´s influence over humanity. Violent J and Shaggy 2 Dope feel the same way about the mystery of miracles. Like the power of magnets.

The relationship between magnets, the miraculous or divine, and the influence they exert over people´s lives, appears in one of Plato´s early dialogues. In “Ion”, Socrates engages with a performer named Ion, who greatly admires Homer. In fact, Ion only recites Homer´s works when performing, and claims that he is the only poet that matters in the ancient world. Socrates listens to Ion and then speculates on the nature of his poetic inspiration. Socrates says, “What moves you is a divine power, like the power in the stone which Euripides dubbed the ‘Magnesian’, but which most people call the ‘Heraclean’. This stone, you see, not only attracts iron rings on their own, but also confers them a power by which they can in turn reproduce exactly the effect which the stone has, so as to attract other rings”.

Socrates believes Ion is attracted to Homer in the same way a Heraclean stone (what is now called a ferromagnet) attracts iron rings. And once “magnetized” by Homer, Ion also possesses a similar – although weaker – power to attract others through his work. Inspiration, according to Socrates, acts like the invisible force magnets display in the natural world. But the force itself is not natural. It is divine: “[these] fine poems are not on the human level nor the work of humankind, but divine, and the works of gods, whereas the poets are nothing but the god´s interpreters, each possessed by his own possessing god.”

Socrates goes on to claim that poets have no skills and volition at all, and function merely as vessels for messages from gods. Inspiration is really an elevated form of incapacitation. But that is the price poets must pay, according to Socrates, in order to create works that radiate the magnetism necessary to attract attention and adoration.

A painter friend and I once argued over whether or not art can be alive. She makes works that hold different traditions of painterly abstraction in suspended animation. Outlines of shapes that echo a shoe Guston might have drawn float in a rich wash of olive green and brown ochre, like an unfinished corner of a Josh Smith. And so on. She believes that by bringing these elements in proximity and in conflict on canvas, a reaction takes place – materially as well as conceptually – that is almost alchemic, generating new forms of life.

As much as I respect her work, I disagreed. I replied that her paintings couldn´t be alive because paintings cannot truly die. They can be destroyed, or abandoned, even eaten, but paintings cannot shed its mortal coil because they cannot experience mortality. And besides (I added), to imagine the work as being alive is essentially saying that a thing is a being. And if that is the case, what is to stop one from reversing the spell of the magical thinking, and treat a person as a mere object? A slippery slope.

What I said was not wrong, but I´ve come to realize it was not right either. Or rather, that fight years ago did not really have anything to do with whether or not art is capable of being alive. My friend knows the difference between a living being and an inanimate thing. She is not an artistic animist. But I think what she was advocating for was the potential for art to work like a magnet, where it pulls elements from the empirical world toward itself in such a way that its composition suspends their typical configuration and enables their reordering to generate new forces of attraction. Her view that works can live seems to me now as another way of describing the inexplicable and invisible power some works posses, drawing us closer, holding our attention, as if they were alive and beckoning us to feel the mystery of their own making. It is less a matter of producing inorganic life, and more in line with imagining a materialist Kélan vital.

But a work is more than an attraction. Art´s power has as much to do with how it keeps the world at arm´s length. By repelling the advances of those who want nothing more than to make art embraceable, relational, and understandable, art gains a semblance of autonomy, and acquires the power to evoke in the person experiencing the work – however fleetingly – those moments in one´s life when actual freedom was tasted and felt. And by insisting upon the unresolved conflicts of reality return as immanent considerations of form, art severs the chain of thinking that binds its import to an aesthetic tradition that pictures the image of wholeness and cohesiveness as the expression of holiness and reconciliation. When art refracts its inner elements into an order of irreconcilabilities, art´s essential polarity changes from something that strives to attract, to one that can´t help but repulse. This aura of repulsion enables art to levitate above its own grounding.

Diamagnetism is the property an object acquires when an external magnetic field close by causes it to generate an opposing magnetic force to resist that field´s pull. In recent experiments, scientists succeeded in levitating drops of water, a hazelnut, and live frogs, by using the natural diamagnetic properties inherent in all matter. 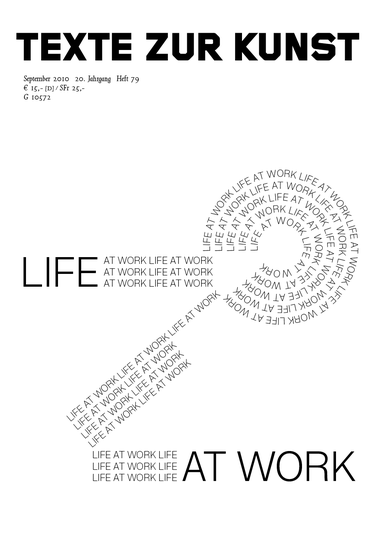