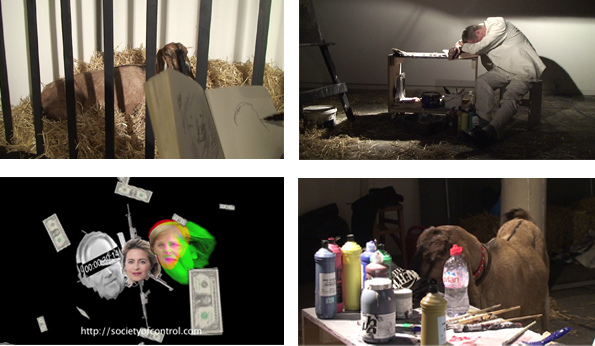 As an artist’s statement on the issue of research, I would like to refer to my film “The Hard Way to Enlightenment”, which examines the possibilities of artistic research in regard to the current shift in the concept of the public. I believe that this shift – particularly due to the impact of a totalitarian global economy – brings with it a different function of art, a different role of the artist and, something very important, a different quality of education and research. What role do artists, students, teachers, and researchers play in these developments? Is contemporary art production passively at the mercy of the present changes or does it instead grasp itself as a kind of epistemological tool?

Apart from the seasonal organization of art fashions, research in the institutional fields has above all become a means to generate and control products of knowledge. In economically precarious times such as these, funding is only made available if the projects are declared as research projects. Among other things, this gives rise to a specific application language, a jargon of commitments and declarations of intent that promise utilizable knowledge, i. e., profit. Already at this point, a selection begins that prioritizes economic appropriability and predictability of the research results – something that contradicts an originally open orientation of research. Furthermore, reinforced by the introduction of the Bologna process, research in the context of the university becomes a compulsory exercise in a curricular master plan. Fulfilling of these guidelines increasingly requires additional evaluation processes, credit points, certifications, and rankings. Control and evaluation measures accompany the course of research projects all the way to feeding them into concrete contexts of utilization: copyright, patent law, closed systems, company secrets. Hence, when institutional research becomes the instrument of rationalisation, profit maximization and controlling, the research result will be a predictable affirmation of the dominant ideology, the market economy. Research in such an environment can only be depressing – goodbye to “the Gay Science”.

On the other hand, research would have a lot of resistant potential to offer: still research is curious and open-ended, it is an expedition to uncharted terrain with an unknown goal. Strategies and methods are often improvised, determined from one moment to the next. Research is obscure and unpredictable, although some may wish it were otherwise. Research can therefore not be constricted, quite to the contrary: restrictions pose a challenge to research. Good research reflects on itself and is therefore also directed against its framework conditions. For this reason, the investigation of the control mechanisms, the imposed systems of belief and ideologies must be a part of research itself. Research can therefore also make use of methods of resistance: Strike, obstruction, and protest, just to mention a few, are open-ended experiments than can lead to new and surprising results.

The former “knowledge factories” of the 1970s have been transformed to incorporated enterprises during the “New Economy”. They are closely interlinked with management consultancies (e. g., McKinsey, Roland Berger, Ernst & Young) along with their strategies (business re-engineering, franchising, branding, merging, and outsourcing), and they prefer to grasp themselves as knowledge corporations globally staking their claims. Similar developments have taken place in other areas in the past years: Over the heads of democratically elected governments and their legal systems, agreements have been made and organizations installed (wto, gatt, and recently gats) that allow supranational corporations to take hold of formerly protected markets and public services. In this respect, taking over universities is fatal, for now the new “spirit of capitalism” has inscribed itself in the central place of social and intellectual reproduction, so that it can further spread in the thinking, research and actions of following generations.

As opposed to other resources that are exhausted when used, the opposite is true of knowledge. The more knowledge is used, the more knowledge is produced. Its dissemination increases its fertility. Knowledge is therefore not an ordinary commodity: The attribution of a monetary value, privatization and commercialization don’t make sense in the case of knowledge and contradict its very essence. But knowledge is allegedly the oil of the 21st century. According to capitalist logic, access to knowledge must be limited and restricted in order to make it profitable. The seizure of universities, patenting, also of living things, the extension of copyright to all fields of knowledge production, are privatization strategies to make a profit from scarcity and access control. This goes hand in hand with the control of all human communication channels, the Internet, tv, telephone, and public space.

While conflicts related to open and closed systems are intensified by the shortage of resources and privatization, we will continue to live in the ruins of patriarchy and neo-liberalism. We need a type of (also artistic) research that will lead to fundamental social change in that it creates, shares and keeps open new thoughts and a different kind of knowledge. Research in institutions is necessary to change these institutions. Exposed to the dictates of a utilitarian logic and subject to the cycles of controlling, institutional research will succeed in nothing other than implementing of predictable, technoid fantasies.

For these reasons, another type of research gains importance, one which I would like to call, in analogy to Schüttpelz/Fohrmann, “bohemian research”. What I mean is extra-institutional research and the free association of researchers, the production of knowledge in exchange with others who are faced with similar problems but bring along different qualities. This research arises from existential necessities. It investigates problems of everyday life, problems that really affect the researchers. It is a research commissioned by oneself, a research in life, of life and through life. This kind of research is self-organized. It is not self-help, for that is assigned, it is not self-entrepreneurship, “Me plc” or “We plc”, for these are career models and new forms or communitarianism (Red Tories or however they may be called) that propose a sort of “grassroots capitalism”. Despite all proximity to a new form of capitalism that seeks to make precisely the extra-institutional remainders of life productive and profitable for itself, I see self-organized “bohemian” research as an opportunity that should not be underestimated in regard to the way in which locations and researchers are constituted and in the quality of the knowledge it produces. Here, in the labyrinths and orifices of bohemia, one can encounter the last “protected” places (or parallel societies?) as focal points for critique, dissidence and a relatively uncontrolled production of knowledge evading general social control.

But how does this knowledge distinguish itself from the knowledge of an elitist, self-proclaimed “knowledge society” obsessed with technology, which is installing its access codes across the globe, while thousand of millions of excluded wage slaves have to do the dirty work for them? For a knowledge commons! Research must take sides so as to protect its most important resource – knowledge: No patents, no copyright, no ancillary copyright! Free access to and free availability of all knowledge resources for everyone libraries, the Internet, scientific publications, schools, universities. The quality of education is the sociability of knowledge. Knowledge must be shared so that it can grow. So there’s a lot that needs to be done! Opening up research is more necessary than ever. It must find its way out of its secure institutions and take to the streets. Bohemian research is a struggle for the freedom and openness of research, for keeping open and commonising knowledge, and in the end that is a struggle to overcome capitalism. It may sound strange, but that’s the way it is.