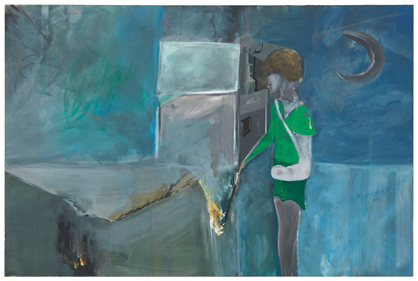 The figures that inhabit Avner Ben-Gal’s paintings, humans, animals, and in-betweens stay away from the canvas’s borders. They are fully invested in their activities: Setting an envelope on fire, nursing a just-fallen moon, or boarding a burning airplane. They do not wish to breach their painterly preconditions, or mistrust them. The frames of the canvases on which they figure are their limits.

All of the ten large paintings shown in “The Rover”, Avner Ben-Gal’s first solo show at Contemporary Fine Arts in Berlin, serve as hermetically closed mise-en-scènes in which nobody and nothing steps beyond its predestined route (fate), however disastrous, petrifying, or obscure these might be. As if under the influence of drugs or a delusion, the isolated protagonists’ “motion” in the works appears to be slowed down yet determined. In “You fell”, we see an anthropomorphized lion (or a lionized man) that bends down affectionately towards an ill, recumbent half-moon; both are dressed in hospital-green uniforms. The vertical light-blue ground serves as a foggy landscape – a wall, water, and sky. The ground is “torn” at its center and uncovers an underlayer of watery yellow-red paint and sketchy lines. Like on the other canvases, the different layers of treatment are left exposed, the figurative and the abstract are evened out so that the “story” that is sketched always has the potential of falling apart.

This encounter between a lion and moon is depicted with humor and compassion (Although painted with almost no features, their faces “express” something, possibly the painter’s identification with the object of his contempt or compassion).

Indeed, Ben-Gal’s works provide a relatively equal dwelling terrain for human and animal figure. In one particularly dark painting (“Untitled”) we see a recumbent figure embedded in darkness. It is a figure of a woman smelling a flower she is holding in her hand, which was left unfinished. Her lying body and limbs are turned into a dormant elephant. A flock of birds can be detected only on prolonged looking, painted out of almost nothing. The depth of the darkness here, like in the other paintings, is produced through an act of lessening, of almost unpainting – using dry paintbrushes and murky color. A bird reappears in a bright painting called “Bird and Snail”, in which it possesses a nude woman’s legs. It embraces a snail with its feathery wing while putting its beak into the snail’s head.

Yet narrativity is persistently disrupted in the paintings. Rendezvous between figures are rather rare; each of them is isolated. Even if these featured figure-creatures may recall and be inspired by fables, such as La Fontaine’s or Krylov’s, Ben-Gal’s interest lies clearly not on a moral maxim to be drawn from such stories but rather in that which is common to man and animal, that which can be called reductively or with excess “life”, that which exists beyond law and language.

It is not only animal and human that morph into and out of each other in Ben-Gal’s imagery. Bodies are deformed; the living and the nonliving, organic and artificial blend into each other. What his work wants to constitute is not the display of deformation, but rather to apply deformation.

The historical moment from which Ben-Gal’s figures emerge is a state of permanent crisis, instability, and uncertainty, of an enduring anticipation of disaster (see for example the series “Eve of Destruction”, 2000–2001). However, the ongoing global condition of catastrophe, following the events of September 11, 2001, brought this figure of hazy transformation from the nightmarish into the historic. Hence, the disintegrated, decomposed human figure, once an outcome of causation, might have become a representation. 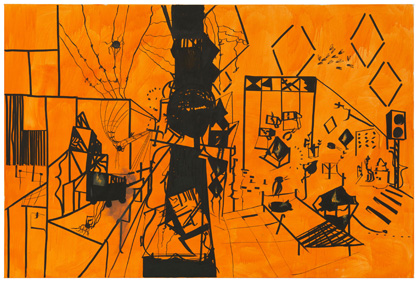 Two paintings are dedicated to airplane disasters. In “Airplane” a deformed man boards a burning jet, while another flying airplane is about to go up in flames. In another (“Untitled”), one can hardly recognize a man who bends over in a burning aircraft seat. In both paintings the dry and reduced color palette creates an atmosphere of burnt plastic and roily smoke, on the verge of explosion. The dark backdrop depicted in “Johnnie Walker” shows a man standing in a doorway with his penis hanging loosely. The “interior” he overlooks is haunted with shadows and objects’ silhouettes, and looks as though it had been burnt.

In the Israeli artist’s earlier œuvre, such relentless transitions of form took place as violent collisions, for example in the recent paper works that were gathered in the book “Biogenetics” (Tel Aviv Museum of Art, 2012), where one could detect batteries animating meatballs, hairy penises losing control, or a moon milking a camel. Ben-Gal’s human figure thrives through its decomposition and decay. However, here, in “The Rover” it seemed that tranquility and pictorial content have replaced the sense of emergency and spasm that was released from the artist’s earlier work. Here, a smoky perspective is projected onto the painting itself – all forms and figures, even when drawn with a pen, are boneless, slightly blurred, and lacking definition.

In “The Rover II”, a boy in shorts sets an oversized envelope on a turbid fire with a torch. His one hand is fixed in a bandage while the other one blends into the torch. At Contemporary Fine Arts, the 2m x 3m large painting hung centrally in the glaringly lit gallery space. The crippled child-figure divides the blue-gray ground into four parts. A half-moon on the right (an overturned symbol for Islam, or a curved spear) corresponds with a house-like structure at the center and a black mark recalling Arab calligraphy. The envelope, an old-fashioned means of communication, could have offered the painting continuity with the world outside the painting, but it is, significantly, set aflame. Alongside the ingathering of all the occurrences at the center of the works, this also points to the limits of these (unframed) paintings as a stabilizing device that secures the viewer from involvement, and leaves the disaster grasped, defined, and contained (to his/her relief).

Many of the spaces featured on these canvases (and in Ben-Gal’s work in general) look like stage sets. They are often painted in a perspective similar to that of a photographic documentation, indicating the depth of the theater. More specifically, they share an aesthetic with a type of television backdrop that was popular in the 1970s in Israel, imported from Anglo-Saxon media and inspired by avant-garde art, designed as means for “progressive educational” ends. The space in the paintings is therefore fabricated (at least) twice, framed once by the limits of the canvas and once more by the depicted coulisses of an “artfully” drawn landscape, a street corner or a domestic interior. Ben-Gal’s painting is aware of photographic procedures. It is neither a window, nor an opening to another world, but rather a stage for ingathered pursuit that leaves the viewer behind a semitransparent, gelatin-like fourth wall.

Evidently Ben-Gal has faith in his painting’s capacity to attain decay, filth, and violence – the Figure [1] that he generates undergoes decomposition and degeneration – within the aseptic gallery space, where all pictures are hung in a straight digestible row. Ben-Gal’s painting is dry, it shows reservation toward the medium’s sensual tradition and history, it resents decorativeness and it wants to challenge the boundaries of likability. But while the figures in his works are indecent, deformed, hybridized, or mutilated, painting as a mode of representation or as a platform that supports pictures and stories, ultimately remains stable and unscrutinized, like the image of a lonesome cowboy that rides on, on a galloping horse, in a John Ford Western, that is projected on an already torn-to-pieces screen. 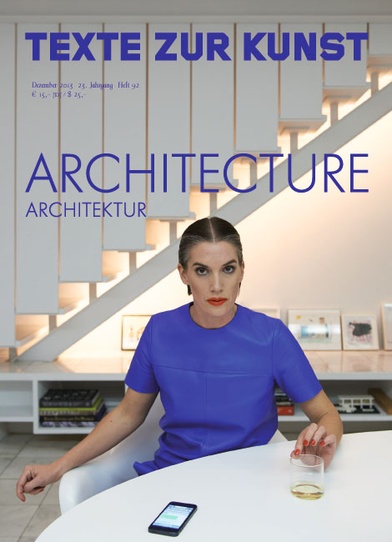