With this issue of Texte zur Kunst, we take a closer look at one of the most contested groups of art world protagonists – “The Gallerists” – thus continuing a series in which we have previously examined “The Curators,” “The Collectors,” and the “Artists’ Artists.” We initially intended to approach this study vis-à-vis the longstanding ‘dealer-critic’ (Harrison and Cynthia White) or later ‘dealer-­collector’ (Isabelle Graw) systems: power structures in which the art seller, as gatekeeper to artistic production on the one hand and market valuation on the other, occupies a decidedly privileged position. What we found, however, is that not only have the demands of this professional designation changed dramatically in recent years (now requiring 24/7 communication, perpetual travel, and a constant presence at fairs), but that in recalibrating to accommodate these pressures, the gallerist has, in a sense, become something other than what we once took him or her to be. What, today, can we make of the “good” gallerist, carefully establishing a stable of artists, “placing” their work over time in particular institutional and private collections? And how does this position square with those of the many new (or at least newly prominent) mediators further altering the field – the advisors and consultants, the “flippers,” and various digitally-based aggregators?

To give coordinates for this emergent topography, we have called on economic sociologist Olav Velthuis who, here, analyzes the moral allegations waged against such collector-cum-dealers and art entrepreneurs as Stefan Simchowitz, Bert Kreuk, and Carlos Rivera, among others whose buy-young-sellyoulater strategies have been widely decried as sacrilege. But is the influence of these new players (for now at least) truly not chiefly symbolic? Their emergence ostensibly corresponds with another trend: that the extreme economization of the art system in the past two decades, perhaps counter-intuitively, has heightened the displacement or masking of the financial aspects of art dealing. It was precisely during this past twenty-year period, Lüneburg-based scholar Hannes Loichinger proposes, that the term “gallerist” has come into vogue. Loichinger argues that this designation, as distinct from “dealer,” may stem from an impulse to sublimate the art dealer’s essential relationship to the market.

Within this issue, the reader will notice that certain localities and time periods are given special regard. And indeed, the very concept of the ­“gallerist,” we have found, is directly tied to specific places and times, namely such Euro-American art centers as New York, London, and ­Düsseldorf/Cologne. Relocating to New York from Cologne as the 1980s market went bust, gallerist Friedrich Petzel tells of opening an off-space in SoHo in 1993, of the New York art world’s migration to Chelsea in the later ’90s, and of his approach to managing an international operation today. Also reflecting on this period, artist Richard Kern recounts how he first came to show with his New York gallerist, Hudson (of Feature Inc.), with whom he would work for nearly twenty years. Ever pursuing the limits of institutional critique, artist John Knight took note, during this time, of the dealer’s changing status. Locating the root of the art system not simply in its physical architecture or in the “aesthetics of its administration” alone but in the bodies of those who serve as its human nodes, he created a piece in 1992 for his New York dealer Colin de Land; for it to be shown, it had to be worn. Revisiting Knight’s work in these pages, Isabelle Graw points out that the success of this particular work hinges, in part, on de Land’s hybrid status as dealer/artist/advisor.

As a precedent for this, there was, of course, Rhineland dealer/curator/advisor and artist ­Konrad Fischer (aka Konrad Lueg), whom art historian Lynda Morris’s contribution for this issue concerns. Morris worked closely with Fischer in the late 1960s and ’70s on such seminal exhibitions as “When Attitudes Become Form” and other efforts involving the international network of actors that gave symbolic meaning (and thus market value) to Conceptual art – a discourse to which Fischer’s dealer model was essential. What becomes visible is a much messier separation of curatorial, social, and financial interests than is officially permissible (one need only think of the backlash Jeffrey Deitch received joining LA MOCA, for example), never mind that Fischer’s model is precisely the kind of gallerist that we, and with it, the market, privileges today.

Forty years later, such divisions are hardly more clear-cut. As Hamburg-based collector Harald Falckenberg notes (drawing on the fiscal data of the some 8,000 galleries supposedly active worldwide), the secondary and primary markets appear to have merged. In turn, do we now question the special access accorded gallerists in their liaising of artists and collectors? In his “Tips for a Gallerist,” Falckenberg offers his thoughts on how it might be possible to re-establish a strong position between the poles of ultra high-end and DIY. Executive director of New York’s Armory Show, Noah Horowitz further comments here on the anxieties of, and possible future for a gallery system in the throes of reconfiguring its middle ground.

With this change radiating out to less market-­oriented zones, art historian Lane Relyea’s contribution traces various efforts, particularly in the U.S. to establish discursive centers operating with relative independence from the mainstream. And yet, arguably it is the mainstream domain of the digital sphere that bears the most promise for many younger artists working independently of the gallery system and possibly of grants and institutions too. However, such an arrangement nevertheless requires the acceptance of other economic models, ones developed in tandem with the web. To address this spectrum of issues, we sat down with gallerists Niklas Svennung (Chantal Crousel, Paris) and Nicole Hackert (CFA, Berlin), New York-based advisor Lisa Schiff, and Berlin-based New Zealand artist Simon Denny to hear their thoughts.

The requirements of business and artistic production may be changing, but for gallerists, it would appear, this is not the end of days, at least not now. After all, it is in the labor and very notion of these custodians of the white cube that the transformation of symbolic meaning into market value coheres – an operation the contemporary art system cannot, it would seem, just yet do without. 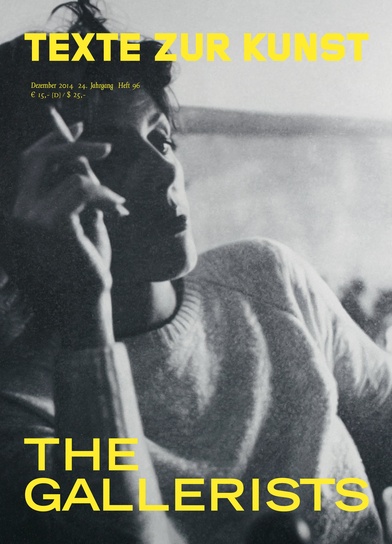