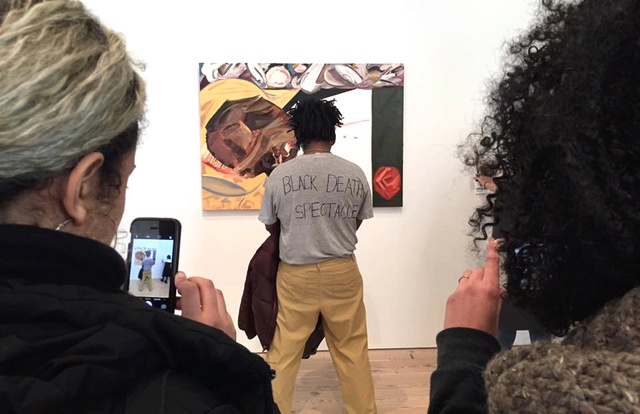 Increasingly, the most potent debates in arts discourse are initiated by -- if not entirely contained within -- discussion carried out across social media. The recent controversy over Dana Schutz's painting of Emmett Till, placed on view in the current Whitney Biennial is a case in point.

To offer, in some way, a record of the terms of this discussion -- and to open the exchange beyond certain social-algorithmic channels, we asked art historian George Baker to adapt for Texte zur Kunst, the following, painting-centered thread (begun March 22) that played out on his page.

A disclaimer, to begin:

Allowing one’s off-the-cuff musings on social media to be published, polished a bit, elsewhere: This seems unwise. It is not the old rhythm of the art historian, not even the now-outmoded pace of the art critic, surely not this critic. Such musings do not amount to an essay, hardly even a real position-taking. Even more so than in any discourse (Bahktin), they are fully infiltrated by the voices and queries of others, usually friends, which I want to preserve here. I also feel that the pace of the debate has far out-stripped the musings, no matter the speed of their reposting. Adapted from a Facebook exchange from last week, and some simultaneous statements posted from a secret Instagram account that I run, the words that follow are instantly obsolete.

I have been following the debate around Dana Schutz and the inclusion of her painting “Open Casket,” 2016, in the current Whitney Biennial, from afar, as Los Angeles-based critics are forced to do.

“I am writing to ask you to remove Dana Schutz's painting Open Casket with the urgent recommendation that the painting be destroyed and not entered into any market or museum. As you know, this painting depicts the dead body of 14-year-old Emmett Till in the open casket that his mother chose, saying, “Let the people see what I’ve seen.” That even the disfigured corpse of a child was not sufficient to move the white gaze from its habitual cold calculation is evident daily and in a myriad of ways, not least the fact that this painting exists at all. In brief: The painting should not be acceptable to anyone who cares or pretends to care about Black people because it is not acceptable for a white person to transmute Black suffering into profit and fun...”

Dana Schutz’s short response to the call for her painting to be removed – and destroyed – was not on Tumblr, not in the post that stopped my mindless scrolling, but it was easy enough to find:

The two statements call for reaction, critique, dismantling. Both stopped me in my tracks. But this text is not that. To the two statements, I simply append a painting. It's what art historians do.

This other painting came back to me from some half-accessed memory. It came back to me from being hurled at me (by me?) in another post on social media, a thread half-remembered, and unable now to be found. I think it was a discussion I was having some years ago with Rachel Harrison, who is on Facebook sometimes, under an alter-ego that it is not for me to reveal, a kind of 1970s trucker version of Rrose Selavy. I imagine she posted the painting to me as some kind of a response. Perhaps it is a false memory. Perhaps the painting simply reminds me of her. It does remind me of her. And so I remembered, perhaps: 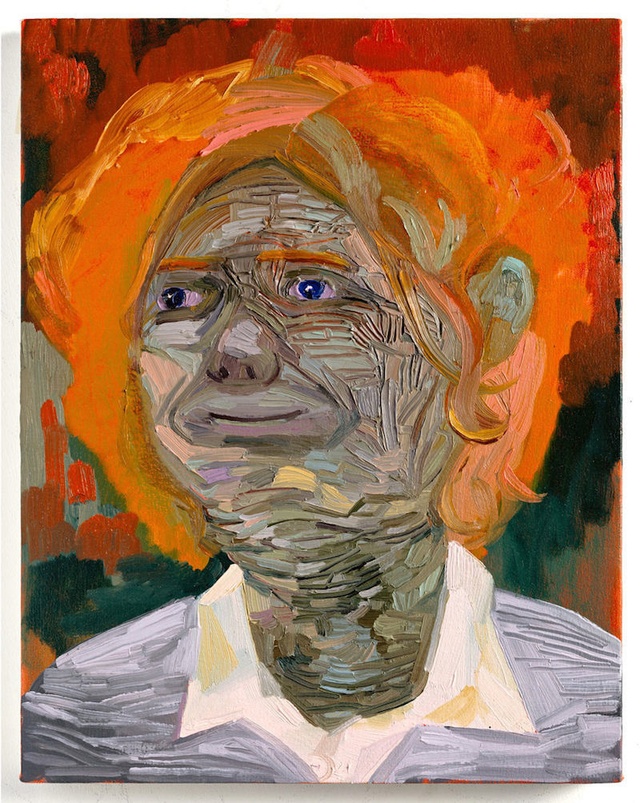 The painting says more than the artist’s statement. I wanted it to stand alongside all the words. All the words, Hannah Black’s and Dana Schutz’s own, and their two extremes of the strategically violent and the falsely empathetic.

To this post, a friend immediately responded with another passage from Black’s letter, an excerpt she found to be strong argument:

“Emmett Till’s name has circulated widely since his death. It has come to stand not only for Till himself but also for the mournability (to each other, if not to everyone) of people marked as disposable, for the weight so often given to a white woman’s word above a Black child’s comfort or survival, and for the injustice of anti-Black legal systems. Through his mother’s courage, Till was made available to Black people as an inspiration and warning. Non-Black people must accept that they will never embody and cannot understand this gesture: the evidence of their collective lack of understanding is that Black people go on dying at the hands of white supremacists, that Black communities go on living in desperate poverty not far from the museum where this valuable painting hangs, that Black children are still denied childhood. Even if Schutz has not been gifted with any real sensitivity to history, if Black people are telling her that the painting has caused unnecessary hurt, she and you must accept the truth of this. The painting must go.” 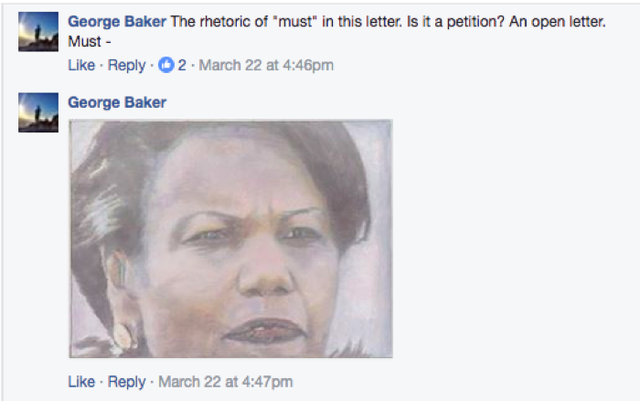 The rhetoric of "must" in this letter – Is it a petition? I asked my friend. An open letter. “Must.”

The ridiculous claim of empathy, of connection.

In the face of this, there is the evidence of the painting, the older Schutz canvas, the “Self-Portrait as a Pachyderm.” With its title, playing on the etymology of the word pachyderm, which simply means “thick skinned.” With its compelling use of purple. There are so few purple paintings. Purple must be defended, supported.

But how to describe the work’s gesture? Is this a figuration, a kind of painterly disfiguration, as empathy? Would this be what empathic disfiguration looks like? In modernist aesthetics, the dialectics of disfiguration always opened instead onto an experiential field of alienation and anomie, dissonance and disconnection--the modernist mask, Picasso’s “Les Demoiselles d’Avignon” as a violent assault on the human form and aesthetic spectator both, the breakdown of any sense of “communion” that art was once dedicated to provide. Schutz’s painting, a disfiguration after disfiguration, perhaps, presents instead a naïve attempt at what can only be described as a kind of cross species “empathy.” This is what Schutzian empathy looks like, it seems to me. Empathy with the animals (we remember the painter Franz Marc), but more, with the pachyderms, endangered giants from the continent of Africa. Which comes off, basically, as the white woman artist in blackface. Even if it is purple-face, really.

To which another friend responded, as so many have: “I find the idea that an artist would advocate the destruction of another artist's work to be far more violent and disturbing than the ‘offending’ painting itself.”

And I would agree. The letter is shockingly self-promoting and authoritarian. Now, I don't know Dana Schutz’s work very well. But even commenting based on the little that I do know of it (the “Self-Portrait as a Pachyderm” has obviously stuck with me), wouldn't it be more necessary to speak to the uncomfortable fact that Schutz painted Emmett Till because what happened to him, what happened to his body, to his face – this young boy’s destruction, his racist murder – "matches" her aesthetic of disfiguration? Schutz painted Till because his mutilated face aligns with the disfigured figures of her art. But this is as flat-footed and obscene as the “Self-Portrait as a Pachyderm.” The naive collapse is the work of the work. This is its definition of the magical power(s) of painting. 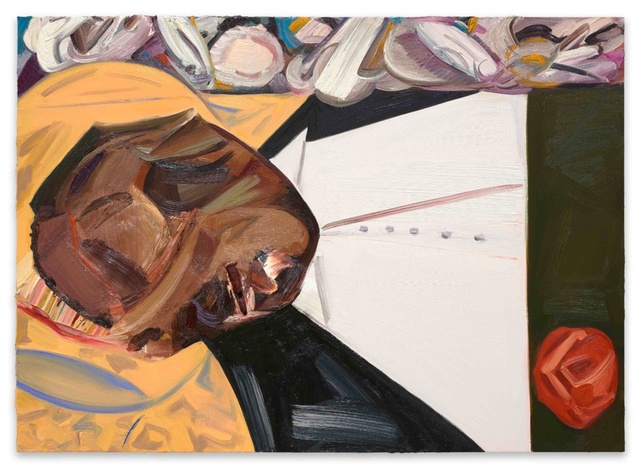 We may want to believe that empathy has no restrictions but it does have limits. Schutz’s painting, “Open Casket,” is naive, like most of the artist's work. Not just in its painterly style but in its gesture, its “logic.” But naiveté edges into something much more sinister here, as the work collapses the destruction of Till's body and face, his murder, with the artist's own aesthetic. This is more narcissism than empathy. (Painting is not good at empathy; one of its founding myths, as Caravaggio long ago reminded us, of course is precisely the myth of Narcissus – the myth of boundless self-love, the myth as well of what Lacan would have called “mis-recognition.”)

So we are left with the face-off of rhetorical violence and aesthetic narcissism. But what has happened in the wake of this is just as fascinating. We are all talking about Emmett Till in the face of a work of art that, as usual, does little to engage the history of racist violence. Right now, I'm reading, instead, the essay by Darby English on Jason Lazarus and Emmett Till that another friend, Julian Myers-Szupinska, shared yesterday on Facebook. Another half-memory: I do believe I once heard this text as a public lecture, and its claims have stuck with me. English’s thinking on Emmett Till and “interracial intimacy” is the opposite of the current dynamic (dialectic?) of authoritarianism and empathy, self-promotion and false consciousness. But I wouldn’t be reading it today if not for Hannah Black’s protest. I would not be reading it if not for the flagrant insufficiency of this painting.

Evidently so much has changed, even in the last five years, and certainly since the moment of, for example, Dana Schutz’s first retrospective, at a university art gallery on a campus where I used to teach, a real painter’s art school. The critical reaction to the exhibition then, in 2011, was uniformly positive. These are the last words of the review of that show published in the New York Times: “Again and again Ms. Schutz has challenged herself to come up with a subject that’s too awkward, gross, impractical or invisible to paint. But she has yet to find one that stumps her.” [2]