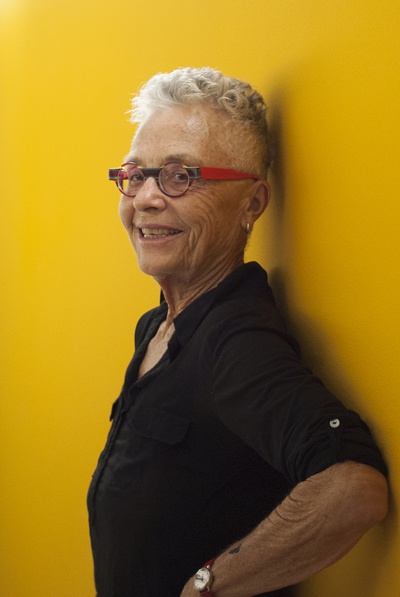 So much in today’s filmic landscape would be unthinkable without the work of Barbara Hammer, a pioneer of the medium’s technical forms as well as its subjects. The bodies we see in a Hammer piece are never disconnected from how we see them. As we mourn the passing of this singular figure, Ada Maria Hennel offers a look back at the distance that Hammer measured for us from the void that still remains to be filled.

“The art of dying is the same as the art of living.” [1] This statement was made by Barbara Hammer in her last lecture performance, The Art of Dying or (Palliative Art Making in an Age of Anxiety) (October 2018 at the Whitney in New York). The radically libertarian and deeply vitalist message underpinning this remark sums up the ethos of Hammer’s radical feminist aesthetics and politics.

The visual artist and experimental filmmaker, a pioneer of feminist and lesbian cinema, passed away in New York City on March 16 at the age of 79. Not far from Stonewall, [2] Hammer spent her final years in a West Village apartment that she shared with her lifelong partner, the human rights activist Florrie Burke. For 13 years she lived with cancer, and more recently spent time in palliative care preparing for her inevitable departure. Dignity was no passive construct for Hammer; rather, it was an active force that she advocated until the end. In a performative lecture at the Whitney Museum in October 2018, Hammer brought her own assured fate into the institutional space. Perhaps one of her most eloquent and self-reflective performances, she blended art, politics, and an electric personal charisma into a seemingly straightforward plea: the right to die with dignity.

Her prolific body of work, produced over five decades, is one that significantly shaped queer art history. Her radical aesthetics articulated new forms of lesbian identity, community, and sexuality, amidst the prevalent heteronormative (and almost exclusively male) gaze and narrative forms. She was a woman with a cause.

Hammer made over 90 experimental and documentary films, beginning in 1968. Her work combines an interest in the formal, physical, and tactile qualities of her medium’s materiality with the mission of reclaiming and illuminating marginalized narratives. The quest for visibility was fundamental to Hammer’s œuvre at a time when gay women artists had few if any points of reference.

Barbara Hammer was born into a middle-class family in Hollywood, California on May 15, 1939. Hammer earned a bachelor’s degree in Psychology at UCLA before attending graduate school at San Francisco State, obtaining a master’s degree in literature (1963) and, later, another in film (1975). It was not until her late twenties that Hammer began exploring representational space by writing poetry, painting, and drawing. As a housewife she built herself a studio to paint in the basement. She studied painting under the apprenticeship of the artist William Morehouse, and soon discovered that her interest lay in the moving image rather than the static space of the canvas. From the moment she held her first movie camera – a super 8 Bolex with a zooming lens – her gaze was unafraid to extricate the celluloid surface as a field of action for mental and formal discovery. Later on, it was the work of certain women artists that would stand out and inspire her. Maya Deren’s Meshes of the Afternoon (1945) is the direct inspiration for I was/I am (1973), one of the first three 16 mm films Hammer made, exploring self-representation through dreamlike imagery. The artist features herself transforming from a princess wearing a tiara and white gown to a revolutionary sporting a motorcycle jacket and gun, riding atop a motorcycle. Motorcycles were what Barbara loved best, after projected light and her lifelong love of Florrie Burke, of course.

Her first film, Schizy (1968), awarded an honorable mention at the Sonoma State Super 8 Film Festival, explores the duality of being a woman living in a man’s world. This propelled Hammer to leave the confines of her marriage, join a feminist group, and ride off on her motorcycle to Berkeley. For her second film, Hammer (then still married and known as Barbara Ward) shot silent 8 mm footage depicting the processual destruction of a graveyard and the inscription of an epitaph stating “Barbara Ward Will Never Die,” erecting a monument to her forgone identity as a married woman. Time and again, she engaged in the feminist project by making public even the most complex constructions of the self within one’s own intimate psychic sphere.

Hammer’s coming out fueled artistic experiments such as the performance-driven film Sisters! (1974), which captures the free love era, the second wave of feminism, and the West Coast American art scene. It is a film made by, for, and about women, portraying them in nontraditional roles running the machinery of the world. The film includes footage of the first Women’s Liberation March in 1970. Although the films from the 1970s have a kind of documentary value today, the works were originally meant as experiments aimed at changing the present.

It is Hammer’s experimental films that most provocatively augment queer modes of viewing pleasure. This is true of her short experimental documentary film Dyketactics (1974) in particular, which can be read as a work that forged a new approach to lesbian eroticism. One of Hammer’s most groundbreaking pieces, or “lesbian commercial” [3] as she often referred to it, shows the raw materiality of women’s bodies, with the artist putting lesbians – including herself – in front of the camera. She shot on 16 mm, as did other structuralist filmmakers at the time, and heavily edited the footage, cutting the celluloid and manipulating it to create a multilayered superimposition that enhanced the sensual qualities of her images. The film was edited with, and seemingly directed toward, the sense of touch; each frame in the film has an image of touching. Commenting on her films from the ’70s in 2012, Hammer explained: “My life changed when, as a heterosexual woman, I made love with a woman. My sense of touch increased incredibly. I don’t think I was aware of it as a sense as important as ‘taste’ or ‘sight’ or ‘sound’ during my heterosexual life.” [4]

Past and present are constantly flickering in her work, replicating a stream of consciousness. One could say that in a large part of her creations, time, which she conceives as something both physical and fundamental, becomes tangible, with the viewer experiencing it as a bodily sensation. This happens, for example, in works such as her 16 mm film Sanctus (1990), where the layering of images carries a temporal verticality. Working with the collection of Dr. James Sibley Watson’s X-rays of the human body, Hammer was moved by the beautiful images of the body’s interior – distorting images of the organs, skeleton structures, and bodily fluids. She manipulated the medical imagery, cutting, layering, recalibrating the movement of time into an erotic exploration of the body.

For Hammer, activism was fundamental to her art. She built long-lasting relationships with fellow artists, community activists, and a new generation of filmmakers. In 2017, the Yale University Library added Barbara Hammer’s archives – comprised of ephemera, correspondence, photographs, notebooks, and manuscripts – to its collection. Living up to her lifelong goal of putting lesbians on screen, Hammer made use of the proceeds from the sale of her archive to establish the Barbara Hammer Lesbian Experimental Filmmaking Grant.

Hammer’s approach to the world as an artist who relentlessly sought to deconstruct systems that have structured and homogenized conceptions of what desire is, and what it looks like, has inspired a generation of those who have followed in her footsteps. As a thinker, teacher, and filmmaker, Hammer was a bright light for those who are compelled to capture their own version of what it means to be yourself.

Ada Maria Hennel is engaged in collaborative artistic and curatorial projects in South America and Germany. She lives and works in Berlin.