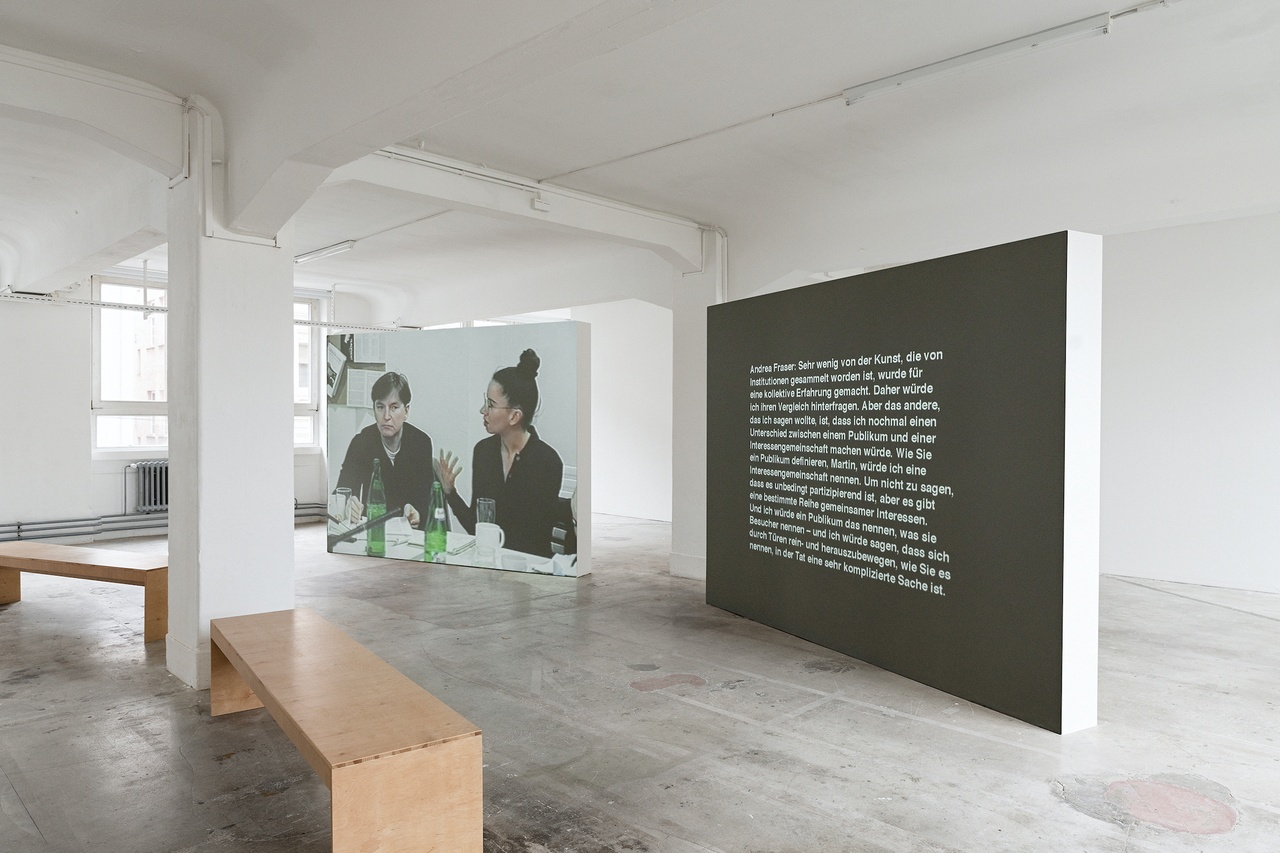 Much of the activism unfolding over the last few years in the art world has centered in part on the value and conditions of artistic labor, especially in art’s institutions. While there is a long and rich history of artists and art workers advocating for themselves as workers, real change has been slow and arduous and is often met by institutional gatekeepers who are reluctant or, more typically, averse to structural change. “Working Groups” at Künstlerhaus Stuttgart revisits one important predecessor to today’s conversations and uses it as a starting point to think about and implement new labor relations in the arts, as David Jenal reports.

Current initiatives to strengthen artists’ rights often refer back to a fragmented and in parts sobering postwar history. Several undertakings that sought to rethink the material and social condition of works of art in the context of project-based institutional collaborations and market activities have achieved modest degrees of success. The protests and hearings of the Art Workers’ Coalition (AWC) in New York in the late 1960s and early 1970s aimed to establish a legal and practical framework for collaborations between artists and museums and attracted relatively wide attention. While the ideal medium of such a framework was yet to be determined, the AWC’s lectures and debates made clear that such a medium had to take into consideration the economic and social conditions of the underlying system and thereby ensure fair compensation for project work and resales. It was in this context that Seth Siegelaub created The Artist’s Reserved Rights Transfer and Sale Agreement (1971) with lawyer Robert Projansky, a template agreement to be used by artists in the course of the sale of their works. Inspired not only by the discussions of the AWC but also by European laws such as the French droit de suite, [1] it aimed to empower artists by granting them extensive rights over their works even after their sale, including a controversial 15 percent share in resale revenue. Today, the so-called Artist’s Contract is considered a seminal document at the nexus of art and law. However, the ultimate goal of the AWC and the contract, to redefine relationships between artists and institutions, was never fully realized.

“Working Groups” at the Künstlerhaus Stuttgart revisits the Services working group that convened at the Kunstraum der Universität Lüneburg in 1994 to address similar pressing questions. The working group grew out of discussions among artists Andrea Fraser, Michael Clegg, Mark Dion, and Julia Scher in the fall of 1993. A questionnaire distributed by the artists following their discussions and a proposal developed by Andrea Fraser and Helmut Draxler finally led to the formation of the working group in Lüneburg. It was supposed to serve as a forum for discussions, for gathering material and information, and ultimately as the foundation for developing a basic contract defining rights and financial terms when providing artistic services. In addition to Fraser and Draxler, the participants were the co-directors of the Kunstraum, Beatrice von Bismarck, Diethelm Stoller, and Ulf Wuggenig, and the artists Judith Barry, Ute Meta Bauer, Jochen Becker, Ulrich Bischoff, Iwona Blazwick, Susan Cahan, Michael Clegg, Stephan Dillemuth, Renée Green, Martin Guttmann, Renate Lorenz, Christian Philipp Müller, Fritz Rahmann, and Fred Wilson. For two days they discussed labor relations, provision models, institutionalized hierarchies imposed on artists, and other labor struggles they themselves had experienced individually when collaborating with institutions. They focused on project work, meaning post-studio practices such as site-specific or public art projects that “involve expending an amount of labor which is either in excess of, or independent of, any specific material production and which cannot be transacted as or along with a product.” [2] Artists today continue to provide this type of work without receiving adequate remuneration from curators, art institutions, or other contracting entities, and suffer from structural marginalization as exhibitions and institutional settings designed for physical encounters undermine immaterial practices by their very nature. Adding to this are the underlying conditions of the neoliberal, hyper-individualistic, and itinerant working environments that have become increasingly dominant over the last few decades. Against what sometimes appears as its own assumption, the art field is not spared from the conditions evoked by unregulated capital markets, the platform economy, and plutocratic governance. The pamphlet accompanying the exhibition at the Künstlerhaus states that “artworld sites of production, distribution, education, reception, and consumption are entirely synonymous with socioeconomic inequality.” [3]

The program of the Services working group followed four thematic sessions “Serving Institutions,” “Serving Audiences,” “Serving Communities,” and “Serving Art and Artists” which are represented at the current exhibition at the Künstlerhaus by four large video projections playing the complete recordings of the gathering, including its introductory and concluding sessions. The video footage totals eleven hours of material and is accompanied by subtitles that appear in adjacent projections. The subtitles underscore the exhibition’s encompassing and meticulous approach, which culminates in a thorough re-examination of the documents and media produced during the working group sessions. Facsimiles of the documents, including contracts, letters of invitation, and initial proposals that participants brought with them to Lüneburg in 1994, are available for visitors to read.

“Working Group” also includes a wooden table with matching chairs and a photocopier that visitors can use to scan and reproduce exhibited documents. The exhibition thus bears a striking resemblance to the installation that evolved in the follow-up to the working group at the Kunstraum in Lüneburg. Besides the table, which the working group had gathered around and left in the space afterwards, the installation included documents brought by the participants as well as historical material from the AWC and from artists including Hans Haacke, Michael Asher, Daniel Buren, and the Guerrilla Art Action Group. The idea of “a physical dimension which would revolve not around art objects but around the social interactions” [4] is the logical corollary of an emphasis on non-material artistic services and was thus in line with the working group’s strategy. This concept defined the audience of the 1994 installation, as it defines the audience of the 2020 iteration at the Künstlerhaus; the Künstlerhaus as an institution serves artists and other art professionals rather than the general public, an important distinction for Fraser:

If these strategies become the mode of addressing the “general audience” of such organizations as municipal museums and public art commissions, or the specific communities accessible through them, what of the cultural constituencies’ institutions such as ICAs and Kunstvereine are founded to serve? Services offered one response to this question: turn the exhibition into a forum for addressing issues of immediate practical concern to the art professionals and art students who constitute the primary audience of cultural constituency organizations. [5]

“Working Groups” is the first exhibition under the newly appointed artistic director Eric Golo Stone and marks the starting point of his efforts to assess and question the structures underlying the production and distribution of art at the Künstlerhaus Stuttgart itself. The exhibition initiates a two-year-long series of closed-door discussions: in close collaboration with the Künstlerhaus staff, a legal advisor will rework contractual documents and the institution’s functioning, both of which frame the collaborations between institution and artist. As a first measure, Stone reduced the number of exhibitions per year from five to two. Each exhibition now runs for a period of around five months, an unconventional decision in the art field which was until recently defined by manic acceleration that required constant air travel. The slowed-down exhibition schedule not only allows for extensive accompanying programming and critical analysis but, just as important, for an increase in respective exhibition budgets and artist fees. For an institution founded on rethinking structures and governance, the Künstlerhaus provides a basis for an inside-out approach to institutional critique, one that in the coming years could actually yield the real implementation of what was conceptualized in Lüneburg in 1994.

In a text from 2002, Andrea Fraser reflects on the Services working groups. “What did Services accomplish? Re-reading the proposal, what appears most obvious is what Services did not accomplish.” [6] The group neither drafted a contract nor established an association or lobby. Further, the operating mode of a practical service provision model was not made clear and thus its potential was stifled. The analogies between the working group and the aforementioned initiatives by the AWC and Seth Siegelaub cannot be dismissed. All projects started with high-flying and all-embracing ambitions, got entangled in grassroots questionnaires, hearings, and discussions, and ultimately ended up with a vast array of documentation material yet few results or practical tools.

However, Fraser ends her reflection on the project on a confident note, one that is particularly noteworthy in the context of the Künstlerhaus exhibition: “It [the Services working group] exists as a model for a forum which is, I believe, the condition of possibility for the accomplishment of these other aims. In retrospect I would say that this could only ever have been its objective goal.” [7] Seemingly, the forum has just commenced in Stuttgart.

David Jenal is a writer based in Berlin. He studied Communications and Art History at UdK Berlin and the Courtauld Institute of Art.