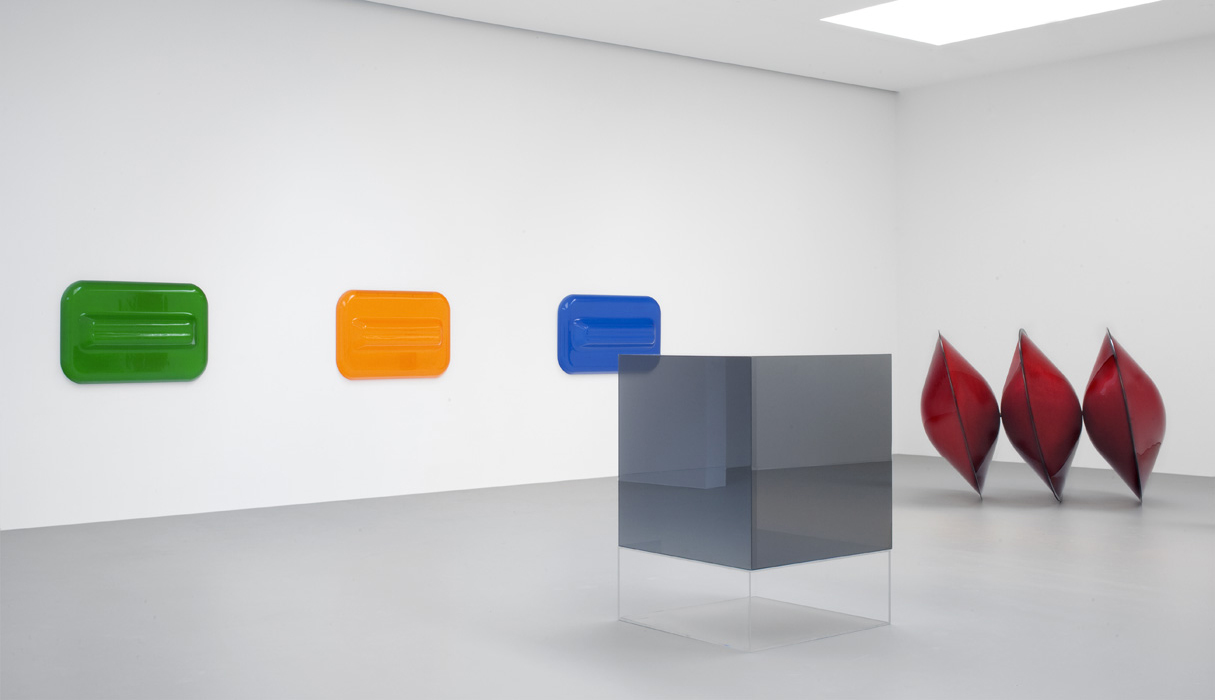 "...in recent years, the balances of curatorial competence and institutional power seem to have tilted toward commercial enterprise, as though at this moment only capital can sustain artistic knowledge and mediate aesthetic desire.One explanation might be that museums have to pretend to be public, and therefore tend to popularize, whereas capital and speculative investment can be elusive and must be exclusive. "

Milton and Rose Friedman on the "4 Ways to Spend Money" in Free To Chose: A Personal Statement

Although unexpected at first, counter-intuitive moves, once enacted, give themselves away. Take for example 23 Wall Street. There, a disproportionably small but grand one-story building occupies one of the most expensive real estate lots in history. This address, known simply as "The Corner" was built during the first skyscraper boom to serve as J.P. Morgan's personal office. Bucking the tower building trend -besides being prestigious, a tower was perceived as "a machine to make the land pay"1 according to the architect Cass Gilbert-Morgan boldly demonstrated that he didn't need to offset the financing of his properties with stories upon stories of rent collecting offices. Morgan, and more importantly his banking empire, was doing so well that it could afford the most apparently wasteful of luxuries. Yet, beyond self-flattery, this iconic move did pay in terms of public relations by instilling near supreme confidence in the Morgan Bank and its assets. And it is with this brilliant marketing strategy, wherein presumed losses afford other gains that we shall visit a recent example in the current spate of "museum quality" shows in major commercial galleries where many objects are not for sale.

Looking at the most recent show at David Zwirner, the excellent "Primary Atmospheres: Works from California 1960 - 1970", what sticks out most in this frame is that some of the works are in fact for sale, around 2/3s of the show. Even so, relegating 1/3 of the show toward a deficit is quite a bit. So why do it? In some regards, the loaning of artworks does allow the curators, in this case Tim Nye and Kristine Bell, to create a more handsome show, but this ideal alone cannot be used to justify a budget. In these lean years, well in all years actually, markets thrive on confidence-it is no coincidence that the English word for credit is rooted in the Latin credo, or "faith", while at the same time the negative term "con man" referees to a trickster who steals confidence. With this in mind, what better way to assert the soundness of a gallery and its investments by showing that its business is so far from being in trouble that it can afford to be interested in supporting and funding scholarship and other extra-business goals? With this kind of display, there is an implication that the gallery's other businesses, its private and second hand dealings in particular, must being doing exceeding well-or such is the perception. And possibly for these reasons, only some of the largest galleries, Gagosian and Zwirner in particular have been able or interested in pulling off this feat. Following this logic, though, the best thing would of course be to have no-thing for sale at all in these exhibitions. Yet, after all, this is a secondary market on view in a place of sale. And here comes the other bonus of putting up work for sale next to work that isn't. The actual pieces on-loan from museums and private collections function in this context quite simply as complements to the orphaned secondary market pieces. Instead of only following the general curatorial strategy of placing artworks side-by-side to create conceptual valances, this mixing creates a different kind of implication: buyer, you could be getting a museum quality piece for your own collection! This is probably accurate as well, but the need to broadcast it is a bit of a boast as if to put on airs on the privilege to be allowed to shop in this boutique. Subtexts aside, let's look at the scholarship of the show itself. 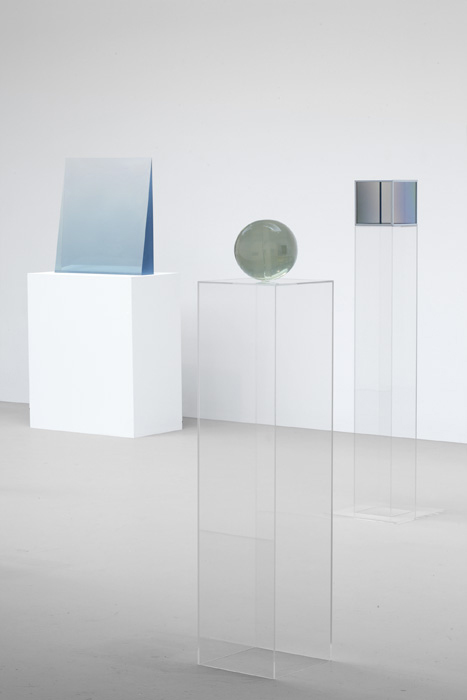 As a "museum-style" show, that is a commercial gallery show which attempts to art historicize in a manner of serious study as well as display work for sale, "Primary Atmospheres" feels the desire to offer a thesis: California, or more particularly, the region's environs have influenced the phenomenology of the artworks considered, and as such, delineate some kind of proto-critical regionalism. Sure, that is a wonderful lens with which to experience the installations through as thoughts of Joshua trees, rosy-fingered dawns, and neon lit highway gas stations just at the edge of the horizon trickle through your minds eye. But instead of a mere poetic imaging, this idea is forced into a grander thesis as the work is set diametrically against the austere work of minimalist practice in New York in the 1960s-begging the question, should Donald Judd be read in relation to the harsh and cold surroundings of New York City? This argument is summed up quite simply in the supporting 2-page press release which severs as the only didactics-there is a catalog with an essay by Dave Hickey for the show and a bookshelf on each artist of course, however, there is no place to sit an read them comfortably-in the gallery:

Distinguishing themselves from their east coast minimalists counterparts, the California artists in the exhibition where reacting to local concerns with light and atmosphere often evoking the qualities of the bright Los Angeles sunlight and the shiny, finished surfaces of the city's ubiquitous signs and automobiles.

In the interest of scholarship, it is curious that there is no mention of a similar thesis set up by Rosalind E. Krauss when reviewing the 2006 museum retrospective of the Angelino art scene of the same period:

while the car culture supported by the maze of freeways that crosses the city brought an emphasis on artificial materials and high grades of finish into the domain of artistic expression. The relentless sunshine of the California coast made light into an aesthetic tool, as apparent in the work of James Turrell, Doug Wheeler, Larry Bell and Robert Irwin.2

Yet if this is the case, why does James Turrell's site-specific installation "Meeting" (1986) work so well in Queens New York and for that matter, why does it have a twin in Pittsburg Pennsylvania? Likewise, why does Donald Judd's work find its ultimate expression in Marfa, Texas?

Mirroring Krauss yet again, the curatorial statement speaks about other "California-nesses" but then mentions that: 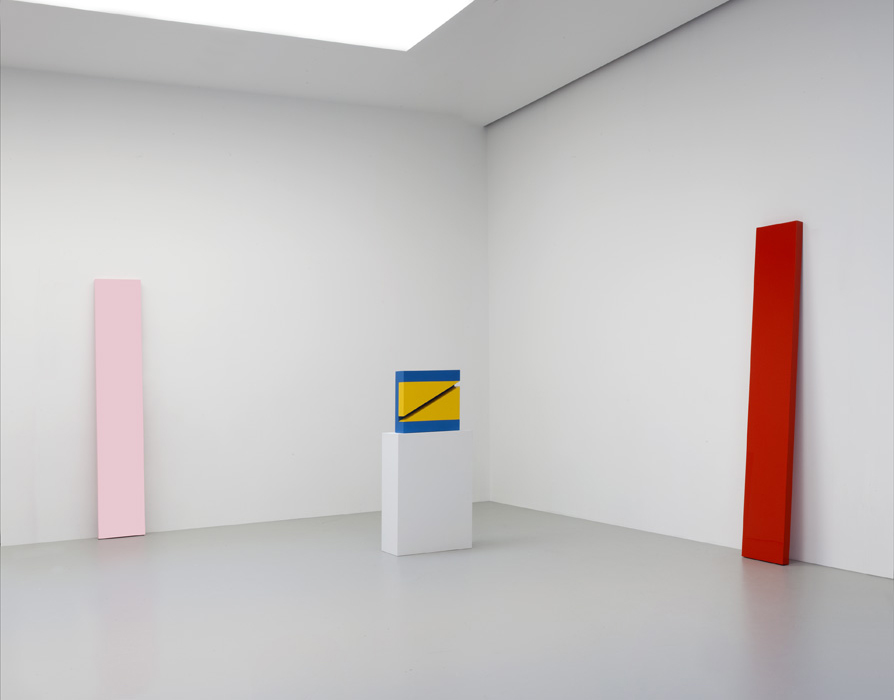 Here, instead of some sense of place, we find that the work was informed by being of a technophile bent or at least took advantage of new materials that defined a more well known moniker: "the space age". Considering "Primary Atmospheres" in the context of the 1960s, many of the works, like the fresh vacuum formed lozenges of Craig Kaufman's "Untitled Wall Relief" (1968) or De Wien Valentine's "Triple Disk Red Metal Flake - Black Edge" (1966), match perfectly well with the same kinds of finishes, colors, forms, investigations, etc of say an Eero Arnio chair (Finland), an Archigram poster (England) or Olivetti typewriter by Ettore Sottsass (Italy)-Laddie John Dill's enigmatic "Untitled" (1969), is a veritable 3d cousin of a Superstudio collage. Interesting enough, the title of the show is an astronomical term for heavy gas environs like those found on Saturn. I'm not sure why the organizers had to add the second half of their title, "Works from California 1960 - 1970s" and then rehash a thesis around it. This doesn't really add much other than a rather cliché East Coast / West Cost thing, and the claims to this being some kind of unique school needs a little more support-Krauss centers her investigation on the power struggle between competing art schools, magazines and other sites of ideology production. In many ways, this show, although it looked somewhat museum-like, is really more in the mood of a subjective gallery group show, which is actually its greatest strength.

Possibly due to the "ambiance" of the works included coupled with the "nonchalant" attitude of the galleries' emptiness, the show offered a rather unprecedented amount of space between each work and thus for each work-for New York City that is, if one is comparing these museum-quality shows to say MoMA, its vast collection, and its throngs of visitors. This freedom to explore the works slowly, intimately, and on their own terms is truly a pleasure, if not the main public audience reward. Zwirner in particular has been leading this trend of not over doing it and allowing the work to speak for some time. Their simple yet effective "6 Works, 6 Rooms" show last fall is the best example of this kind of posture. To some extent, "Primary Atmospheres" might have worked better had it skipped the revisionist history all together, just as it eschewed wall text and other musicological didactics, and literally displayed "Works From California: 1960-1970." Even still, it would be silly to divorce this kind of historical group show from the history of the gallery itself.  For instance, is it a mere chance that Zwirner represents John McCracken and Dan Flavin, who were featured in "Primary Atmospheres" and "6 Works", respectively, around the same time that the gallery devoted large and more typical solo-shows of their work? Who is to say, but galleries as well might be just as guilty of catering to pseudo-popular "preferences" in order to get the most out of their own dollar, so to speak.

1 Irish, Sharon. "A Machine That Makes the Land Pay: The West Street Building in New York," Technology and Culture 20 (April 1989).