Byrd Hoffman gave dance instruction to young Robert Wilson which, by pulling his speech defect inside out through his body, provided successful therapy. In her name Wilson carried forward his newfound access to nonlinguistic reserves of language onto the stage of a new theater. At the time he commenced together with the “Byrd Hoffman School of Birds” his first experiments in theater and performance, Wilson also worked as teacher and therapist. Chance or luck guided his early choices. He happened upon the plight of Raymond Andrews, who was being harassed by police as recalcitrant juvenile not realizing, as Wilson recognized, that the boy was deaf. “Deafman Glance”, the silent opera immersed in the trauma time of a mute boy’s recollection of his murdering mother, was the result – with Andrews as one of the performers on stage. When Wilson adopted his muse and charge, he resolutely added choice to chance. It was the affirmation he again provided in the case of another discovery, Christopher Knowles, whose autism served as found resource for the poetry of “Letter for Queen Victoria” and “Einstein on the Beach”.

While in the past it was chance encounters that led Wilson to engage, for example, a Freud lookalike off the street to perform in “The Life and Times of Sigmund Freud”, now it is the chance of contact with the famous that draws his productions onward. Enter Lady Gaga, who proposed to Wilson that he be her mentor. When she made contact with Wilson, she was following in the footsteps of her art heroine, Marina Abramovic, who by then had joined those lonely at the top. In 2010 visitors to New York’s MOMA swallowed the Abramovic formula: endurance-testing control over the body is the mind’s Passion, which the artist imparts to her audience face-to-face. When in 2007 Abramovic commissioned Wilson to stage her funeral, her “death,” he agreed on the condition that her “life” also be party to the performance.  That three years later she even played the part of her idealized (and hated) mother belongs to Wilson’s therapeutic intervention.

For his 2013/2014 Paris exhibition, “Living Rooms,” Wilson made a series of video portraits of Lady Gaga which reenacted artworks in the Louvre’s collection. In one gallery space there were eleven video portraits based on Andrea Solario’s severed head of John the Baptist and a single Ingres reenactment.  Lady Gaga as “Mademoiselle Caroline Rivière” was not chopped or cropped as close-up, but the face was accorded its due. What is faced in Ingres’ portrait is the adolescent girl’s death the following year. In another gallery – in the midst, this time, of the old masterpieces regularly on display –, a video portrait of Lady Gaga as David’s painting of Marat expiring in his bath included her body as part of the performance, which her face carries off above the single breast slipping out into view. 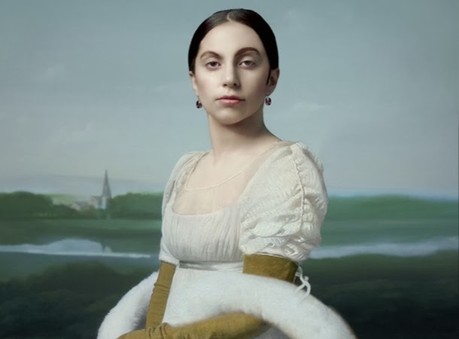 In the beginning of her career Lady Gaga masked her face, but in the meantime has tended to displace the face-to-face through exhibition of her body, at once “perfect” and throwaway, just like a blank used for replication. Just add a face.  According to Deleuze and Guattari’s notion of faciality, the “aspect” that ranges widely across bodies or landscapes is ultimately the face of Christ. But Wilson’s face-saving intervention underscores that before the deposit can be thus redeemed what we face-to-face is an object of identification dangling in the nothingness of finitude.

A living room is the stage on which we stand, sit, lie down, among other conjugations of “being.” Just as the word “standing” (for example) is historically related to “being” in Indo-European languages, so “mourning” in the same lexicon also means to “to fall down” (in identification with the dead). And yet the fall also rises in accord with the repeated throw of chance that initiates in the moment the itinerary or understanding of change. Wilson threw one Lady Gaga portrait out of the loop of reenactment into the center of “Living Rooms”. Wilson’s residence at the Watermill Center in New York was reconstructed in the Louvre as stage set for displaying a large sampling from his private collection. In the “bedroom” there was an unidentified flying object, which turned out to be another Lady Gaga video portrait, one that did not refer to a work in the Louvre, however, nor did it belong to the Watermill collection. What we saw was her body, but as articulated via Shibari, the Japanese art of rope-bondage. Is the occluded face not re-inscribed on this “foreign” body lifted up from itself – like the sketch on her abdomen and womb that Baubo framed by the dress pulled up over her head? The flashing of the face on the exposed female body, the punch line whereby Baubo delivered Demeter from her melancholic impasse, can be seen, Freud allowed, as the humorous aside to the infamous prospect of Medusa, the face-to-face that turned some into their own gravestones, others onto heterosexual desire’s stiff competition. The bondage portrait dangled before us the prospect of a fall upward, which like the throw of chance, like the body’s own tumescence in sexual arousal, reverses the pull of gravity (or grave).

The night of the vernissage, Wilson’s “Lecture on Nothing” opened the series of theatrical events at the Louvre, which framed and supplemented “Living Rooms.” John Cage’s 1949 “Lecture on Nothing,” a cornerstone of his influential collection “Silence”, is a beacon Wilson followed early on in his own theatrical reclamation of disconnection (for example, speechlessness) as another form of connection. For a 2012 tribute to Cage exhibited at the Akademie der Künste in Berlin (at the time the production of “Lecture on Nothing” was in the works), Wilson contributed a page he inscribed with a recollection. The composer let him know following a performance of “The Life and Times of Sigmund Freud” that they were pursuing divergent paths. But disappointment gives way to reparation as Wilson writes on with affirmation that Cage’s “Silence” was his greatest inspiration. In the course of his performance of “Lecture on Nothing,” Wilson focused on the irritation Cage admitted in passing: “If we are irritated, it is not a pleasure. Nothing is not a pleasure if one is irritated.” In Cage’s lecture this irritation was absolved by affirmation of “the pleasure of being slowly nowhere.”  By turning up the volume on the irritation invoked and denied in the lecture, he accorded ambivalent legibility (“Yes and No”) to Cage’s outright dismissal of their affinity.

Surrounded by excerpts from the lecture handwritten on banners, Wilson took Cage’s express invitation (that bored audience members should go to sleep) to bed on stage. Otherwise the staging made room for daydream association, ranging from an audio excerpt of Cage reading his lecture to the photo-based video images by Tomek Jeziorski of Cage and Alexander Rodchenko. At one point the other live actor (Tilman Hecker) looked over stage and audience through binoculars from on high, no doubt a reference to Cage’s bird watching, but equally a seafaring image of finding the moment on the map. In an interview at the University of Iowa in 2008 Wilson noted: “My work has always dealt with a kind of space that allows one to daydream.” Freud argued (in “Mass Psychology and the Analysis of the Ego”) that when the first poet presented the first poem, most likely a hero’s saga, he was that hero – for his audience, too. He had succeeded in transferring to a public, published space the creative omnipotence of wishing, which he separated out from that which we must otherwise keep to ourselves, the asocial second nature of our daydream fantasies. 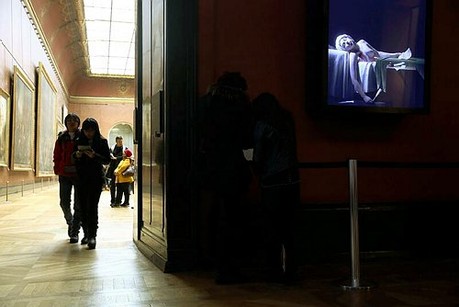 In “Lecture on Nothing” Cage narrated his decision to compose music out of deregulated sound as taking the call he followed on a heroic quest. “Noises, too, had been dis-criminated against; and being American, having been trained to be sentimental, I fought for noises. I liked being on the side of the underdog.” That Cage gives Kansas as the place name on the map of identification with the excluded suggests that it is the Fantasy trajectory of “The Wizard of Oz”  and not that of the competition from the same year, “Gone with the Wind”, that beckons for a chance, a change.

While the genre of Fantasy that Tolkien was pursuing in letters tended toward Nihilism or redemption, Disney’s 1938 “Snow White and the Seven Dwarfs”, which counts as the first Fantasy film, aligned generic wish fulfilment with finite individual development. One look at Wagner’s Siegfried turns up the contrast with the Disney revalorization of Fantasy: the outcome of development out of childhood is the heroism of wishing well. In his eulogy for Mike Kelley, John Miller drew together the strands of genealogy that landed Wagner’s Gesamtkunstwerk on the Coast, specifically at Cal Arts, the institution of art education that Disney sponsored. Kelley’s 2005 “Day is Done” would count then, by Miller’s reckoning, as his realization of this inheritance.

Both the heroic quest into the inner world and the fairy tale of development from primary narcissism to genital sexuality provide captions of legibility to daydream fantasy. Jean-François Lyotard’s reading (in “Jewish Oedipus”) of Hamlet’s active unfulfilment of every Oedipal task is the allegory of Shakespeare’s composition out of curtailed death wishes, in other words upon the crypts of his dead father and dead son. Mourning defuses the death wishes that melancholia projects, inverts, and staggers. One can add slowly being nowhere to this list of ways of disrupting the consumerism of wish fulfilment to make room for a “wishing well” of daydream.

Wilson included in his staging of “Lecture on Nothing” a repro of a letter to Cage missent to his own address. We could see that his assistant back then scrawled across the envelope: “Bob, I thought he was long dead.” After the fact, the letter always arrives at its destination, the death wish always comes true. In contrast, the ancient apparatus of I Ching, which Cage commenced applying to his compositions at the time of “Lecture on Nothing,” organizes nothing as coming attraction between chance and choice. Wilson is not alone at the top with the stars. In the meantime all our chance coordinates are the godlike stars within the mise en abyme we navigate on the Web. Mike Kelley’s ironically practical proposal in 1999 for harnessing the appeal of the stars to fulfilment of asocial daydream wishing, thereby rolling over private second nature into mass culture entertainment, projected into the future as manifesto our already manifest relationship as daydreamers and Web-browsers to the firmament of stars (“The Greatest Tragedy of President Clinton’s Administration”).

While trying to reconstruct the chances and choices that led to the Lady Gaga video portraits, I kept running up against “James Franco.” Following the throw of a link to Mona Kuhn, whose photograph of a seated male nude seemed to promise illumination of the importance of “the sitting” within the conjugation of Being in Wilson’s “Living Rooms,” I discovered, among the countless images available for searching, a spread of photographs Kuhn took of Franco, in which the first color photographs of Marilyn Monroe showing her intellectual aspect in the setting of her sex appeal shimmered through. I was at the art of wishing well. The report that Abramovic was making a film of Franco’s life, however, pulled up short before the asocial reservation of the daydream. But the Web, like the I Ching, neither tells the future nor fulfils wishes. It presents by throws of links the operative forces that determine the future.