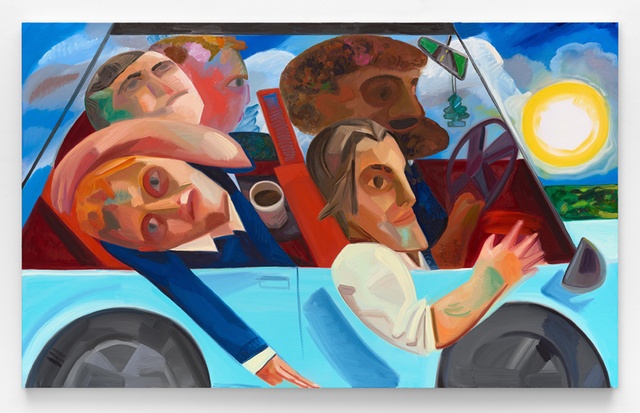 In the closing image of Dana Schutz’s exhibition “Waiting for the Barbarians” at Berlin’s CFA this fall, a tsunami-like wave overwhelms two children playing on the beach. In this work, which is titled “Big Wave” (all works mentioned 2016), several bathers have been caught and one is being devoured by a giant fish; limbs, sea-foam, and sea creatures merge in an angry tangle of color. It could almost be an Old Testament scene, but with obvious current-day associations: the feeling of an impending diluvian catastrophe, whether it be the American presidential election (the outcome decided ten days after the exhibition’s end) or a more diffuse anticipation of civil war and climate change. The common theme of the exhibition is not to be found in the variety of motifs that the loose groupings of new large-format oil paintings and four likewise large-scale charcoal drawings take up, but in the pervasive unease the works provoke through their consistently claustrophobic pictorial space; garish, crowded canvases; and scenes depicting maximal suspense.

Entering the gallery, one first encounters four canvases engaging what, in contrast, might be characterized as the smaller battles of everyday life. For example, “Hangover” perhaps a self-portrait of the artist, presents a three-by-five meter “morning after” scene. On this canvas, one sees a foreshortened close-up of a female figure in bed, eyes shut before the lamp’s glaring light, an empty wine bottle and pillbox on the bed’s edge, with blue sky (intertwined with the scenery) indicating that its already late in the day. Equally, the figures in “Carpool,” to the left on the same wall, seem to each wish they were somewhere else: a ride-share becomes, here, a prison of small talk under the relentless (Californian?) sun. In wide, feathery strokes, Schutz presents both car and commute as the embodiment of the constriction of everyday experience; the windows’ unforgiving lines becoming a rigid corset, constraining the five strangers to the same space. Such desperation with the inescapability of social and formal constructions forms the narrative basis of many of the works on view.

To summarize such situations – to capture, on canvas, the body in the social environment of its time – is surely Schutz’s specialty. Comparisons come to mind but ex negativo: perhaps Amelie von Wulffen’s exhibition (likewise on view in Berlin this fall) at Barbara Weiss, where isolated female figures appear haunted by their pets and wineglasses, nightmarish and demon-like. Or Anne Speyer’s comic-like groups of figures, their laughter seemingly stuck in their throats. Or, say, Max Schmitlein’s gloomy hangover scenes, with medication and glossy cosmetics directly mixed into the paint. But though these subjects may bear some similarities, they present a fully different treatment of bodies, paint, and associative references than those that Schutz puts forth, her figures contingent on the negotiation of the canvas as border, as base filter for the human sensibilities she aims to convey. As such, Schutz’s figures are tightly fitted into the pictorial space: with feet placed next to heads, limbs pressed into the form of the corners, interior and exterior space merged just as the presented scene might require. In “Home Birth” (a motif which also appears, in varied form, in the charcoal drawing “Waterfall”), the authenticity, naturalness, and intimate closeness of an at-home water birth prove to be just another evasion, an idyll unattainable in the constricted pictorial space. 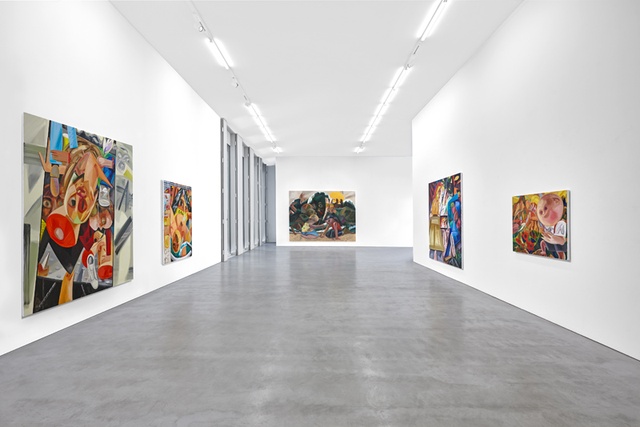 Painting, as Gotthold Ephraim Lessing (in his famed work on the limits of painting and poetry) wrote, should represent the highpoint of a process in which the previous and the subsequent are made comprehensible. With Schutz, both previous and subsequent, as well as dreamlike fragments and surreal parallel events, are often brought into the frame. “Fight in an Elevator 6” (one of three versions from this series that was on view) depicts an argument between office workers in an elevator that has escalated to a fight. Still in business dress and firmly clutching their notebooks, they appear with fists raised; while on the picture’s bottom edge, the scene tips into unreality as the elevator fills with water as one man attempts to drown another. For all their aggression, the pictures’ ideas are pointedly absurd, which is typical of Schutz’s work (think, for example, her self-devouring “Self Eaters,” 2003-2004). The figures are nevertheless humane, however, and evoke sympathy in their despair. At the same time, they are so tragicomic that one just can’t look away.

Though one might then ask: To be unable to look away, is this even a valid category for painting? It would certainly apply here, as the act of looking (and concealing) along with the filtering and framing of what is shown, enact a central operation evident throughout Schutz's works. This is the case, for instance, in the aforementioned “Fight in an Elevator 6,” wherein the doors of the elevator seem to have briefly opened (or are just closing again), granting a momentary glimpse of a scene never intended for the public eye. On the one hand, this motif is meticulously rendered using painterly means: the elevator doors are interpreted as an abstract-formal painting into which the figurative scene cuts violently; the doors, offering a quick glance, repeat the curtain motif of Dutch painting while showing no trace of its subtle depictions of intimate scenes. For here the viewer is not a conspiratorial or discreet confidant, but, rather, a gawking voyeur. Incidentally, the Picasso references in the distorted facial features might be the most apt painterly form for representing such foaming-mouthed brawlers.

Understanding Schutz’s work as reflections of the gaze opens up a new pathway to the show. A gallery assistant informed me that the “Elevator” series had been inspired by Solange Knowles’s “elevator attack” on Jay-Z (documented by a security video from a hotel elevator, leaked in May 2014). A fitting reference for Schutz, with the incident’s double invasion of the personal – through both physical attack and the media hype around the video. It hints at the new dimension in gossip brought about by the omnipresence of electronic recording devices: the security camera’s point-of-view resembling the (pseudo-)hidden cameras of Big Brother & Co., in which the lens becomes a quasi-corporeal counterpart. What is conveyed in analog form in Schutz’s new work is an update of painting’s regime of the gaze for the post-private era. Constantly, one feels much too close here – too close to the melancholy, the depression, the aggression of the temper tantrum or the vapidity and fragility of moments of happiness, to mania and psychosis … but this is no unfamiliar view. It is the everyday entanglement of voyeurism and exhibitionism in which reality shows appear next to YouTube shock-videos next to politicians next to entertainment next to the idyllic world of makeup tutorials. Schutz’s figures are in despair, their crises at the apex of escalation, and yet they are themselves thinking of the camera’s eye. 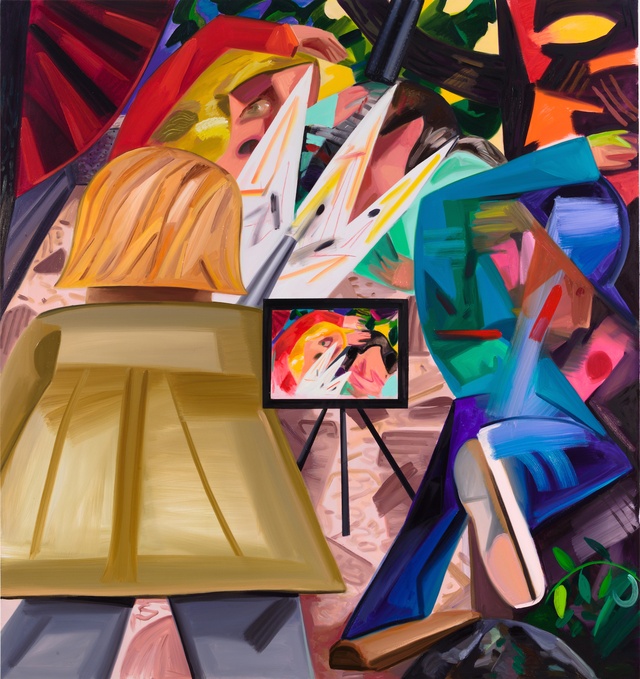 At times, though, it remains painfully unclear as to which side of the thin line between good and bad taste we are moving; again and again, when looking at the paintings, the question comes to mind. At times the pictures are simply too much, too shrill – and while references to “bad painting” are repeatedly made in coverage of Schutz’s work, she purposely refuses to offer either any zone of aesthetic calm or safe retreat into some strategic course of irony.

This becomes especially clear in those works that locate the aforementioned sense of unease not in the individual, but in the hysteria of current political polarization. “Shooting on the Air” refers to an incident that occurred in Virginia in 2015. A man shot a reporter and her cameraman during a live broadcast and then uploaded a video of the act to the internet. Schutz reproduces the filmed shoot-turned-shooting as a picture-in-picture. “Open Casket,” [2] in turn, is a disconcerting interpretation of a photo showing the corpse of the young African American Emmet Till, whose brutal murder in the 1950s became a fuse for the civil rights movement. The bloated corpse’s swollen face is rendered here in thick layers of impasto color that gave way to deep cracks as the paint dried. And can one not almost make out a swastika under the crown of the figure’s black hair in the charcoal drawing “Man in Disguise” – wondering if, at an earlier stage, the moustache and goatee beard were perhaps a Hitler ’tache? Also the previously mentioned “Big Wave” has a further layer of gloom, as the wave reminds of a giant mountain of toxic waste.

The apocalyptic mood prevailing throughout, compounded with the subject of the voyeuristic/exhibitionist, sounds an echo of the same sensationalism that lies at the bottom of current political polarization. Schutz’s works lures us in with an uncomfortable fascination, reflecting this gaze, that of the post-private, and the intrusive. As single works, the individual struggles presented in “Carpool,” “Hangover,” or “Home Birth” may be more digestible; certainly they lean less toward political symbolism. But it is precisely the brutality of the show's overall composition that lends it its unsettling force.

Hanna Magauer is an art historian and lives in Berlin.