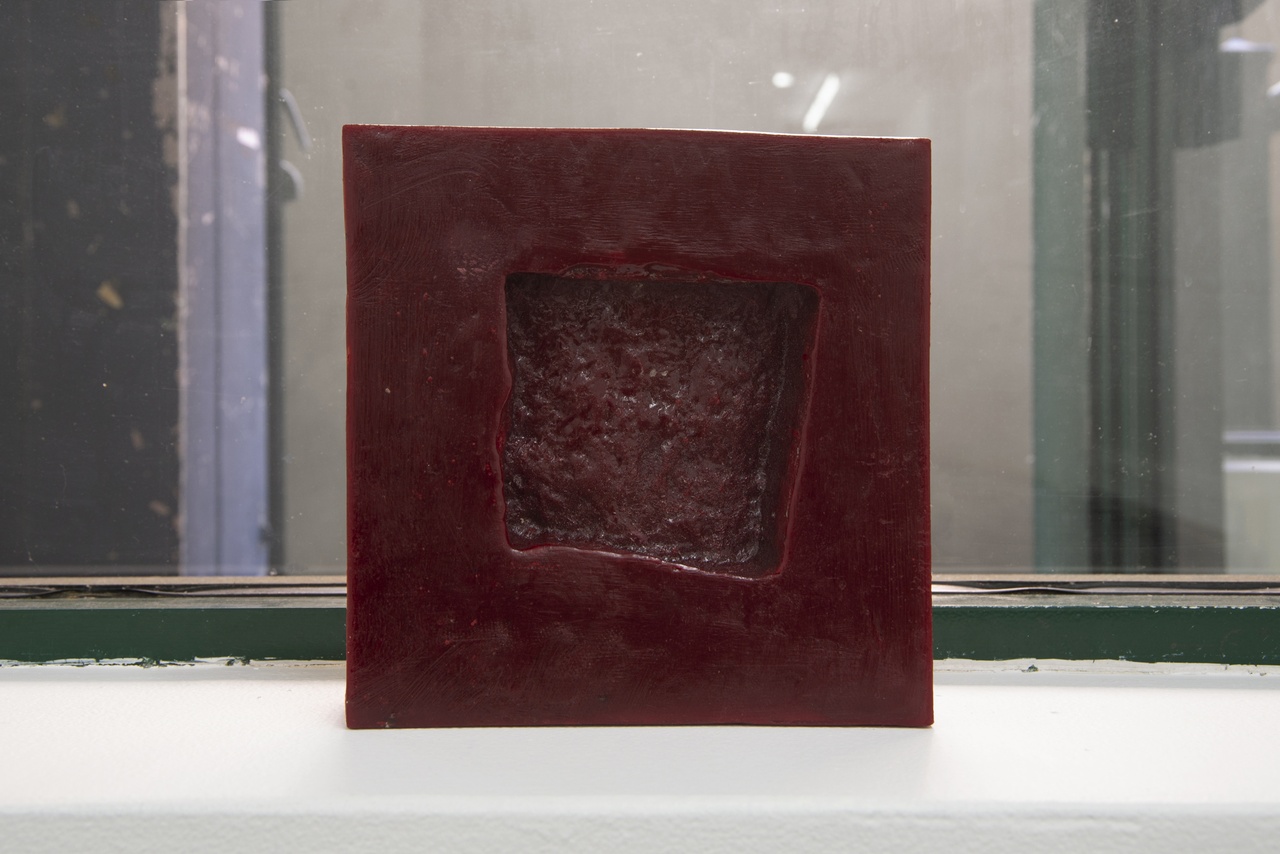 Sculpture and the body. It’s an old chestnut of art history, but one that continues to burn in the imagination of younger artists. The Algerian-born Lydia Ourah­mane has managed to rework this connection, envisioning the body not as the end of sculpture but a way station, a vibrating mechanism that mediates inside and out. Curator and writer Magnus Schaefer unpacks the subtle shifts between inner life and outer shell in the context of a recent show of Ourahamane’s in New York.

Looking in through the shop window of Bodega’s basement-level space, one can survey “low relief,” Lydia Ourahmane’s first New York solo exhibition, almost in its entirety, as if the gallery was an oversized display case – a panorama of small sculptures scattered on the floor and around the perimeter of the main space. From the inside, the shallow, box-like object on the window sill reveals itself to be an actual bas-relief: a brass cast displaying an irregularly shaped imprint with a rough texture in its center. Its front and sides are covered in red wax, and it is accompanied by a thermometer. Further into the space, four life-size casts of a woman’s naked abdomen are loosely arranged on the ground, joined by a cut-off braid of human hair in the far corner. A tiny wooden chest sits on a ledge in another corner of the gallery. This sparse collection of objects appears uncomfortably exposed, with everything laid out for inspection by probing eyes. The works privilege direct modes of registering physical contact and passing time, through the indexical quality of both the various casts and the braid, which points to the absent body that once grew the hair. The thermometer responds to fluctuations of temperature in the space.

Barely visible except for some yellowish stains around the bottom of the walls, Betadine antiseptic solution covers the entire floor of the gallery. This disinfectant is typically applied to wounded skin, or used to sterilize the skin prior to incision, and here extends the corporeal theme introduced metaphorically by some of the other works. There is a hint of gendered violence or physical harm lingering above the apparent facticity of the presentation. Yet the various elements resist congealing into anything resembling a narrative or offering any indications of causes or consequences. 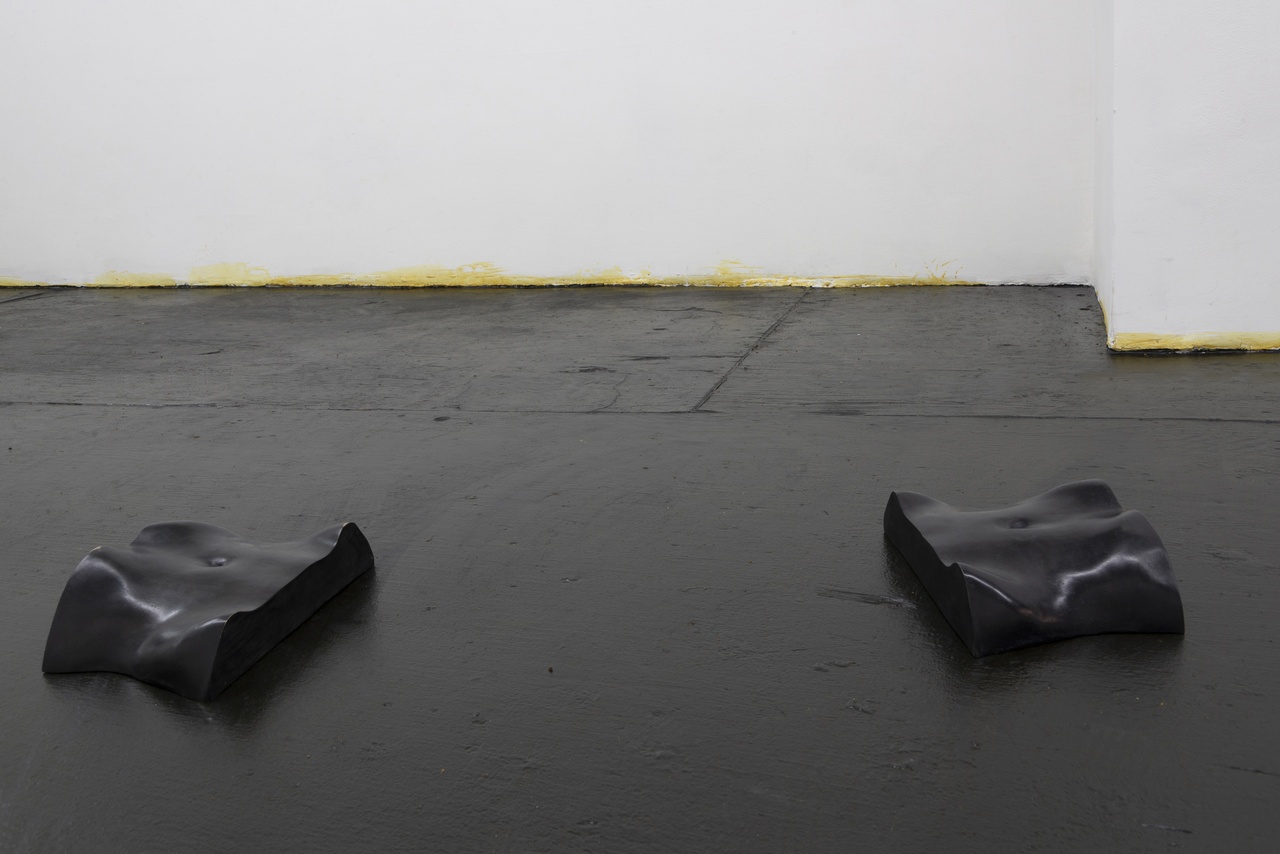 A text pinned to the wall in an adjacent office area may offer something like a key to the whole exhibition. In a taciturn dialogue with the writer Carlos Kong, Ourahmane explains that she aims to avoid closure on the meaning of her work. “I am trying very hard to not talk about it,” she states. What becomes apparent in Ourahmane’s curt statements is a tactic of suspension and deferral, which opts for counterbalancing the austere presence of the works with supplemental information. The checklist of works itself supplements the usual format of factual descriptions one normally finds there, meticulously cataloguing the dimensions and weight of the cast abdomens (bronze belly I, for example, is “bust 33" waist 26" hip 36" 11.9kg”), as well as the volume of the matter-of-factly titled mahogany box (1.5 cubic cm). The 37-cm-long braid constitutes 1 decade of hair, which was “cut on April 23 by Steph Hartop at Bodega, New York.” Low relief, the wax-covered brass object with thermometer that gave the exhibition its title, can be exposed to temperatures up to a maximum of 90 degrees Fahrenheit.

While not a work per se, the press release also deviates from the ubiquitous utilitarian and mostly uniform pattern of this kind of text by providing a glossary for the exhibition, albeit listing the explanation before the term it refers to, moving from the general to the specific. Most of the entries are directly associated with the exhibited objects (“mahogany,” “box,” “volume”), and some steer the reading of the works into slightly ominous directions. “Cut,” for example, which pertains to the act of obtaining the pleated hair, is described as “to make an opening, incision, or wound in (something) with a sharp-edged tool or object.” Per the list of works, the belly I–IV sculptures are made from lead sealed in bronze, and the press release further elaborates that the former material is “used figuratively as a symbol of something heavy” – in this case, something hidden inside the casts of the female stomach and obliquely referenced in the weight of the objects in the checklist.

In previous shows at Chisenhale Gallery in London and the Kunstverein Munich (both 2018), Ourahmane drew explicitly on her biography and family background, positioning the dimension of individual corporeal experience vis-à-vis the colonial history and current political context of her native Algeria. One work in the Chisenhale exhibition, In the Absence of Our Mothers (2018), consisted of two copies of a gold tooth, fabricated from a piece of women’s jewelry the artist had bought at a market in Oran from a young man who, she supposes, may have been selling this item to pay for passage on a boat to Europe. Ourahmane had one of the teeth implanted into her own mouth, symbolically reversing her grandfather’s act of pulling out his teeth to avoid being sent to Germany as a soldier for the French-Algerian army during World War II. Droit du Sang (Blood Right) (2018–), shown in two iterations in London and Munich respectively, comprises an archive of identity papers and other documents once belonging to her grandfather that were recently used by members of her family to claim French citizenship.

“Low relief” foregoes many of these more overt references, perhaps as a response to the intimate setting for the show, or the shift from an institutional to a commercial context. Upon request, the gallery confirms that the body cast in bronze is indeed Ourahmane’s own; the hair is hers too. The flat imprint in the brass relief stems from a stone the artist found while hiking Mount Vesuvius. Such details support the notion that the works bear the weight of biography. Yet they also frustrate any desire to couch their significance within the very narratives that gave rise to the works on view. The closed mahogany box, its content permanently inaccessible, emblematizes this reading, pitting the evanescent richness of lived experience against its silent traces. The glossary that Ourahmane provides in lieu of a press release perhaps suggests a somewhat different trajectory. One of the entries associated with the work low relief reads: “quantitative data concerning the population, such as the number of births, marriages, and deaths – vital statistics.” The checklist’s emphasis on dimensions, weight, and other quantifiable information evokes the extraction of knowledge from living bodies via statistics in modern forms of power that Michel Foucault famously termed “governmentality.” It would be possible to draw lines from here to the bureaucratic and administrative apparatuses that Ourahmane invokes in Droit du Sang, and to the modes of algorithmic governance at work today. In this perspective, Ourahmane’s exhibition at Bodega demarcates – or maybe romantically summons – the long-since-eroded border between exposure and intimacy, between public existence and that microlayer of private experience that potentially escapes formalization. The insistence on displaying what cannot be talked about articulates opposition to representation and the modes of governmentability it engenders. Yet what is absent here is what had made Ourahmane’s London and Munich shows compelling. In these earlier shows, she focused on points where the realm of the biographical and mundane overlaps with larger political formations in a (post)colonial regime. When Ourahmane foregrounds the opacity of individual experience, the work remains engaging but runs the risk that audiences will describe it as “poetic,” which, in the worst case, gives viewers permission to refrain from engaging with it beyond acknowledging its potential to affect us. 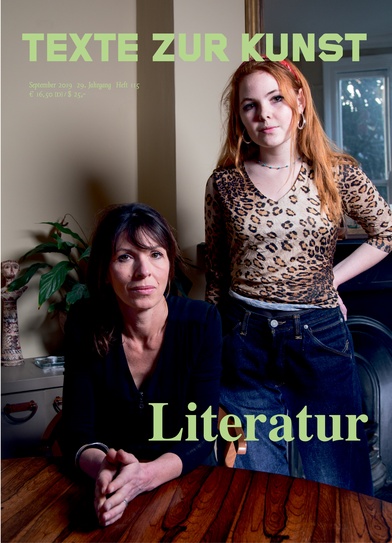