In “Small Habit Revolution,” Berlin-based artist and filmmaker Loretta Fahrenholz turns to two historical works from the 1940s and examines their transference and afterlives in online platforms in the present. Entering the exhibition, one encounters a slide installation projecting disjointed illustrations ranging from a dark, expressionistically rendered graphic novel to mute, sterile vector graphics. An accompanying text explains the striking stylistic disparity: for “Story in Reverse” (2018), Fahrenholz commissioned seven different illustrators via the freelance marketplace website Fiverr to each transpose, in its entirety, Ilse Aichinger’s short story “Spiegelgeschichte” (1949) into a comic. As one begins to wonder what the substantive differences are in visual style, narrative emphasis, and choice of words – and what these differences ultimately say about their own makers’ subject positions – one is immediately distracted by a fast-paced single-channel projection at the far end of the gallery. The video in question, “Mashes of the Afternoon” (2018), is composed of excerpts from over 20 different remakes of Maya Deren’s iconic “Meshes of the Afternoon” (1943) culled from YouTube, which Fahrenholz then compiles while roughly hewing to Deren’s original shot sequence. In addition, QR codes on the wall integrate visitors’ smartphones into the exhibition as a “second screen,” displaying “Meshes” and “Spiegelgeschichte” there as well. While this turn to historical templates is perfectly consistent with Fahrenholz’s previous output, the reliance on found footage might come as a surprise to those familiar with her work. Fahrenholz has become known for a distinct directing method that she describes as “leaning into” different milieus. What does this mean? In essence, Fahrenholz examines the ways in which group formations and relations between bodies are reproduced or redefined. Giving this ethnographic impulse a Brechtian inflection, she pays special attention to the specific ways in which fictionalized interactions allow individuals to reflect more deeply on how they negotiate their relations to one another: through play, role-playing, and, most critically, in the context of the film shoot itself. To supplement the scenarios that she finds already in place, Fahrenholz often draws on loosely related works of art and literature that provide meaningful correspondences. The resulting footage presents fictional events that nevertheless document the very real modes in which individuals and groups perform themselves. Framing idioms and body languages, fashion codes and behavioral patterns, her films zero in on how techniques of performing are coupled with analogous ways of observing. They show how these functional relations intersect with sexual and power hierarchies, and how devices and media figure into the equation. Relying on her highly trained sensibility for such dynamics, Fahrenholz rarely works with scripted scenarios. Instead, her approach to directing disperses control in various feedback loops that emerge organically on set.

“Mashes” pushes this method even further. Fahrenholz neither directed the shoot, nor did she inject the historical template of the film. Instead, the video observes a milieu in which the act of reshooting Deren’s “Meshes” itself already functions as a kind of initiation rite, turning young aspirants into independent filmmakers. [1] Juxtaposing different remakes, “Mashes” highlights the specificity and individual characteristics of each iteration. The video switches between color and black-and-white; blurred segments succeed crisp, well-lit shots; the protagonist and her mirror-faced counterpart cycle through markers of race and gender. Nevertheless, an overarching redundancy of techniques and approaches holds the “mash” tightly together. While cast, set, and props are constantly in flux, each clip emulates “Meshes”’ mode of observing. Folding this replication itself onto the level of content, Fahrenholz raises the question of what constitutes “Meshes”’ appeal to YouTubers.

Deren is somewhat of a patron saint of independent film and feminist art, who opposed Hollywood’s studio system and the conservatism imposed by its high production values. To minimize financial risk, Deren argued, Hollywood reproduced well-tried modes of observing – and performing – inherited from a different media system. Focusing on dialogue, mainstream cinema effectively remediated literature; even gestures and facial expressions were so conventionalized that they functioned like words, as “a visual shorthand of clichés.” [2] Deren’s modernist impulse to purify the medium engendered a project to both emancipate vision and liberate bodies from Hollywood’s all-encompassing gaze. Against the latter’s top-down propagation through hierarchical production and centralized distribution, Deren made a plea for amateurs and independent filmmakers to create outside of the established studio system and its standardized forms. 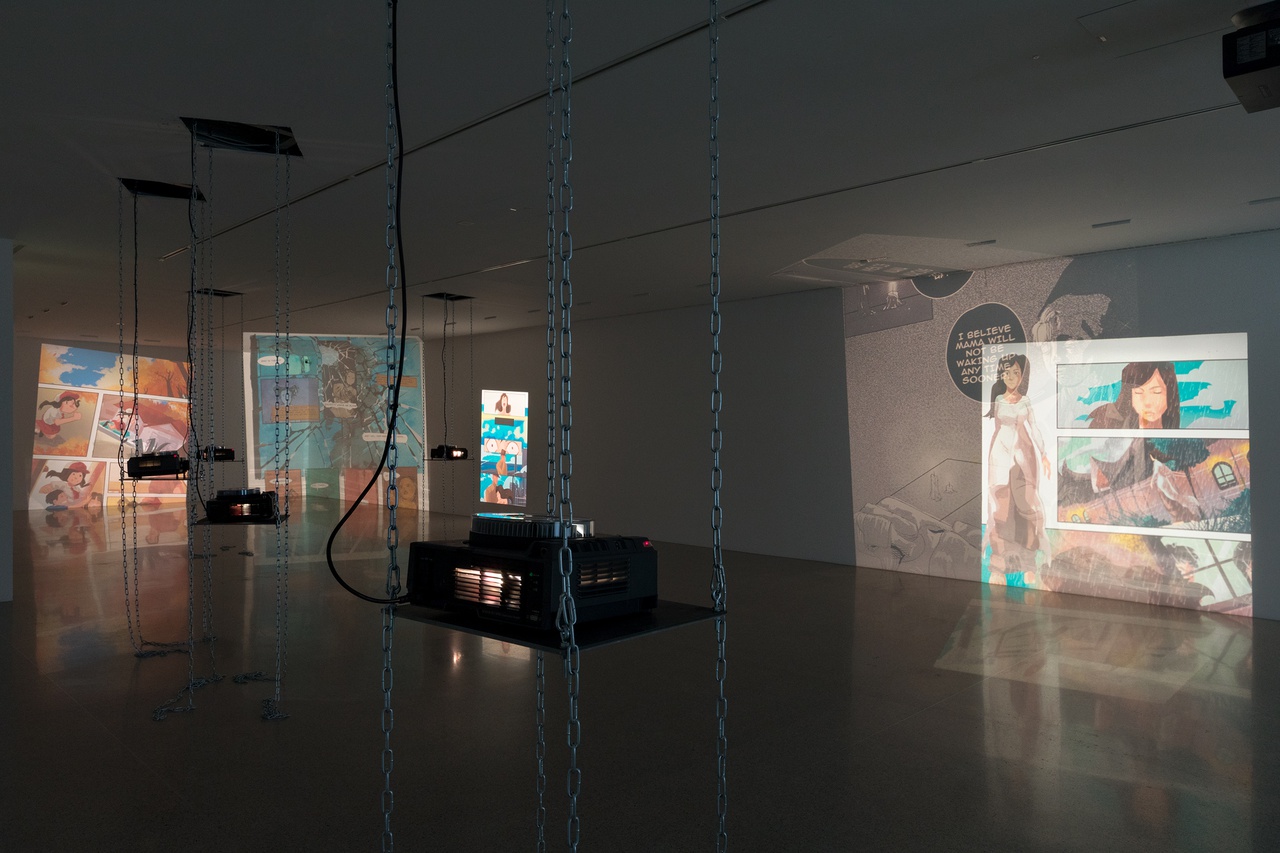 But if “Meshes” potentially offers an alternative to the (male) gaze of Hollywood cinema – one welcoming of different bodies, gestures, facial expressions – what is the film’s status today, as amateurship prevails and a distributed network of “prosumers” is quickly replacing unidirectional chains of transmission? Allocating or competing for attention, YouTube’s users are functions of an algorithmic gaze that is no longer tied to a specific gender. Clearly, sexist modes of observing persist. But once cookies, analytics, and instant feedback implement the proverbial “big Other” as “big data,” additional problems arise. While Hollywood’s economy used to be bound to well-tried templates, YouTube’s distributed production engenders rapid mutations; its feedback loops spur not only diversification, but radicalization, quickly leading viewers from a vegetarian recipe to a militant vegan’s rant about honey, or from a campaign video to racist conspiracy theories. [3]

Reconstructing Deren’s original edit from YouTube clips, “Mashes” discovers the extent to which “Meshes” had already envisioned such dynamics of positive feedback. In Deren’s original, again and again, her protagonist reenters the house in which she always (literally) finds herself. As the camera switches from objective to subjective, the protagonist observes herself observing. Each time, she adopts her other self’s mode of observing and amplifies its oneiric distortions – most prominently in the famous stairwell scene. At each instance when Deren’s protagonist climbs the steps, her motions and the camera’s movements become more vertiginous. Like YouTube’s autoplay, each reprocessing of the scene intensifies the previous diversion, propelling the observer deeper into an ever-escalating nightmare. On YouTube, this mechanism itself remains hidden while it organizes content for the viewer. Adopting Deren’s narrative as a lens through which to examine the online video platform, however, “Mashes” folds this mechanism – i.e., the positive feedback between viewer and content – itself onto the level of content. While thus remediating the platform, “Mashes” operates according to an entirely different principle, however, contrasting the positive feedback depicted by Deren and implemented by YouTube with its own mode of organization. Referring all remakes back to the original, it highlights the nuances of each variation, effecting horizontal differentiation instead of vertical radicalization.

“Story in Reverse,” too, turns to a template from the 1940s. Emulating filmic devices, above all time-lapse and reverse playback, “Spiegelgeschichte” tells a “story in reverse,” beginning with a young woman’s death and proceeding, via abortion, affair, and childhood, to birth. If “Spiegelgeschichte” tells a life story backwards, Fahrenholz’s installation fragments it into competing feeds of disjointed narrative units. While the overall slide projection keeps running, the continuity of each of the story’s versions constantly breaks down. “Story in Reverse” thus doesn’t simply transpose “Spiegelgeschichte”’s content from printed text to the visual language of the comic, but performs a remediation, like Aichinger’s story itself, of the medium in question: in this case, neither film nor literature, but Fiverr.

Fiverr is to creative labor what Uber is to cab driving: it decouples capital accumulation from fixed capital and large overheads, and thereby from legal responsibilities and economic risks. [4] As with the world’s biggest taxi company, which neither owns cars nor employs drivers but has instead established itself as an intermediary brokering molecularized transactions, Fiverr is replacing traditional employment with its competitive market of expressly one-off “gigs,” and salaries with micropayments. Platforms, in other words, turn stable forms, such as employee-employer relationships, into an aggregate of loosely coupled elements that can enter into ever-new relations precisely because these are utterly ephemeral – as in Fahrenholz’s slide installation’s constant reshuffling of narrative fragments. “Story in Reverse” demonstrates that this structural instability is precisely what stabilizes the overall system and facilitates its growth. In fact, some of the commissioned versions were not finished in time for the exhibition’s opening, but could easily be integrated later on. The difficulty of following the story line of any one of them, however, reveals the flipside: for the individual, project culture exacerbates risk and competition, and renders the continuation of work problematic – and with it one’s own self-reproduction. The transition from one “gig” to another is inherently precarious, dissolving routines, careers, and the very course of life itself. Accordingly, where “Spiegelgeschichte” presented life as a linear sequence that could be mechanically run backwards, “Story in Reverse” displays its utter dispersal.

If “Meshes” and “Spiegelgeschichte” both reflected on the culture industry of the 1940s, Fahrenholz’s latest exhibition offers a means to calculate our distance from that moment, in concrete case studies of specific media, above all else. And yet Fahrenholz’s turn to these historical works also traces a continuity with the present. While shifts in media technology have routinely triggered proclamations of art’s imminent dissolution into mass culture, in Fahrenholz’s hands, we are made keenly aware of the degree to which art continues to reproduce itself through acts of distinction, reinscribing its boundaries, by observing, critically – at a level removed – its mass cultural other.