Putting together an issue on algorithms while a pandemic is raging can feel like a performative act. The more uncertain our ability to contain the virus is, the more predictable and controllable our actions must be to curb its spread. However, predictability and regularity are key features of both the IT-based and social algorithms that govern our lives. They reduce complexity and thus anticipate solutions to problems (in traffic, trade or communication, for instance), and so the influence of algorithms was more evident than ever in the coronavirus-induced conditions under which we produced this issue. These days, we go on virtual gallery crawls and tours of exhibition spaces, do our shopping online (now for the first time, or more than ever, or less than ever), and submit to a rough assessment of how much space we take up at the entrances to supermarkets. What is more, the computational processes and data traces entailed by the obligatory self-quarantine in the usual practice of research and writing are being extended to social practices normally carried out in cinemas, theaters, museums, or clubs. The precondion for all of this is that our actions become (even more) controllable and predictable. And with the current shift of social life into digital indoor publics marked by low unpredictability and ambiguity, our choices and experiences, too, ever more closely resemble the character strings with which online retailers point us to the diversity of the goods on offer: “You might also like”.

Actually, the nexus that algorithms indicate is fundamentally ambivalent. On the one hand, there are certain promises bound up with algorithms – be it the hope of monetization through visibility on social media, or the democratic aspects of the idea of prosumerism, according to which the users of media are always also its potential authors. On the other hand, algorithms do not merely reflect power relations, they also help engender them, as racialized segregation effected by search engines or binary-gendered user interfaces illustrate. The art world fully partakes of these ambivalences. Social networks, for instance, tap into genuinely artistic expertise concerning performative impact, while online enactments of selfhood unleash artistic strategies and practices on mass audiences. In any case, the decisions as to which of these enactments will be how successful – whether, for example, an exhibition will be mentioned on Contemporary Art Daily and why, and how much (symbolic as well as economic) capital can be extracted from it – are made elsewhere: in the art markets, but also in the schoolyards of our own bubbles, which thus come to resemble a social algorithm.

If these circumstances arguably make artists the prototypical information workers, this is perhaps due to economic factors more than anything else. Chris Reitz hypothesizes that the boom in what is known as experience-based art is fueled by the fact that data and information are among the central resources of the generation that came of age during the global economic crisis of the late 2000s. He adds that in the gig economy curators in particular are turned into managers of experiences, and they try to make these experiences as ‘intense’ and ‘distinctive‘ as possible; the aggregation and analysis of data promise to help raise key measures of their work – bringing in more visitors while enhancing the appeal of the art institution to sponsors. Yet as Katharina Hausladen writes, the resulting standardization-through-capitalization is not only an economic pattern but always also the manifestation of a quite specific social consensus. Similarily, the asymmetries that data bring out, from cloud-based voice assistants to polygraph tests for migrants, are not so much technological as social in origin.

Simon Rothöhler arrives at a similar diagnosis in his critique of the critique of algorithms. Dispelling the myth of digital ontologies, he discusses selected recent examples from art as well as information technology to demonstrate that we need a critical dataset forensics in order to identify the bias structures embedded in the category networks of a given compilation of data and to expose the social, aesthetic, political, and economic distinctions they imply. In our interview, Jessica Graves draws our attention to the major role that such distinctions play in the fashion industry, and especially to their impact on sustainable and fair manufacturing practices that directly affect people’s purchasing decisions. A coder and consultant to fashion companies, Graves offers insight into processes such as the use of artificial intelligence in computer-aided design and criticizes the distortions that the market produces when algorithms are not applied to real-world data.

As Anke Dyes sees it, functions that report customer satisfaction on online media and sales platforms reflect not so much distortions as feedback loops, implying an individualization of neoliberal control and hence a kind of dialectic of the enlightenment of customers concerning their own records in the cloud. This dialectic, Dyes writes, is especially evident in how it affects the logic of coming out: by reviving the notion of personal attributes to be confessed to, the experience of being outed as a customer threatens to strip the queer subject’s coming-out process of the hard-won freedom of deliberate ambiguity and reduce their agency to consumer choices. In this light, Lauren Lee McCarthy’s vision of a literal self-becoming of technical devices such as Zoom or Alexa may be read as a feminist appropriation of those mechanisms of control coded as patriarchal: becoming an app, becoming an algorithm as a way of infiltrating the lives of strangers. It is a scenario that seems both absurd and enticing in the current situation, when it feels like we perceive each other as nothing so much as sources of danger.

In analyzing and discussing the influence of algorithms along social differences, this issue of Texte zur Kunst homes in on highly various aesthetic practices in order to pinpoint such differences. These practices are hardly limited to what is conventionally described as art, let alone high art, yet each contribution is very clear on one crucial point: the life of society keeps eluding the figures – the numbers, images, and ideas – that circulate about it.

Nadja Abt and Katharina Hausladen 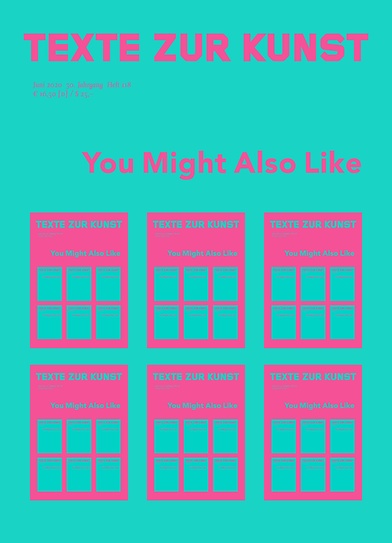