This September issue of Texte zur Kunst examines envy as the operating system of an art world based largely on networking, competition, and interdependencies. Envy, as understood here, develops when individuals orient and compare themselves to others. Psychology differentiates between productive and destructive forms of envy: whereas productive envy should, ideally, motivate us to perform at our best, destructive envy supposedly leaves us with a bitter sense of being shortchanged. One could characterize the art world as a prototype for a competition-driven, envy-generating society; achievement in art is difficult to measure and counts less than success, or at least is no guarantee that an artist will be institutionally or financially successful. The resulting impression of arbitrariness in this milieu is often compounded by the circulation of exorbitant sums of money, which fuel feelings of envy and frustration. In this way, since the early modern period, envy has tended to function as a productive force in the art world, whenever “mimetic rivalry” (René Girard) and the (primarily male) artist-archetype motivated and advanced artistic appropriation. In her 1993 book The Optical Unconscious, Rosalind Krauss recalled the tortured rivalry that Pollock felt toward Picasso, which influenced him to use figurative visual languages that were in conversation with Picasso’s work. This type of mimetic competition manifested in a destructive and identificatory form in Rauschenberg’s oeuvre: his symbolic rivalry with the more senior de Kooning went so far that a young Rauschenberg obtained a drawing from de Kooning, assiduously erased it, put it in a gilded frame with a small inscription, and declared it a new work, fundamentally altering its value.

In today’s digital art economy, the increasingly fluid boundaries between cooperation and rivalry are particularly conducive to envy. Just as we are encouraged to collaborate and cooperate with one another in the art world, our collaborators often also turn out to be our rivals against whom we enviously compete, and this dynamic is augmented by social media. The more outwardly artists orient themselves in a culture of compulsory narcissism – in which the performance of one’s personality must constantly be kept in mind – the more strongly their self-esteem will be bound to what others supposedly are or have in comparison. At the same time, this diagnosis of envy undoubtedly plays into the cutthroat mindset that dominates life and work today. When core professional qualifications include self-optimization and a proactive work ethic, the thesis that subjectivity is dominated by envy, resentment, oppression, and anxiety over one’s social status tends to distract from the structural inequities that pervade capitalist relations. The depiction of exploited subjects as envy-filled rivals is thus thoroughly tendentious; it threatens to entrench social hierarchies as immutable conditions if it doesn’t simultaneously recognize and take seriously the possibility for solidarity as well as the emancipatory implications of discontent and indignation as catalysts for social resistance. With that in mind, this issue of Texte zur Kunst takes an ambivalent position: On the one hand, envy’s social dimension is not simply assumed but rather scrutinized as a powerful dispositive in the specific case of art. On the other hand, the issue registers and analyzes the social causes of envy, which, not least because of the devastating economic consequences of the pandemic (including on the art market), produce deep social disparities.

Drawing from online media such as German daily newspapers and social networks, art historian Hanna Magauer takes up envy through the insinuating rhetoric with which white people frequently react to the discourse surrounding racism. Magauer problematizes the accusation that marginalized and racialized people extract capital from their experiences of discrimination in order to place themselves in an advantageous position. She identifies this accusation as an unwillingness to reckon with and recognize one’s own entanglement and complicity in structural inequity. The sociologist Sighard Neckel defines envy as a consequence of the vast disparity in the distribution of goods and positions that doesn’t account for the disparity in access or opportunity to participate. According to Neckel, not only does envy embed society’s status norms into subjective emotional worlds, but the very arousal of envy is also a proven strategy for distinguishing oneself as particularly successful and for presenting one’s lifestyle as desirable.

This political economy of competitive self-optimization comes under pressure to legitimize itself in the art world – a field in which social infrastructures, such as dinner invitations or Instagram accounts, are often prerequisites for an artwork’s accumulation of symbolic capital – when the conditions of production are as contradictory as the ideology of the American Dream. Author Leigh Claire La Berge reminds us of this in her analysis of art world antagonisms, which involve legions of unpaid workers, the phenomenon of the art star, the restrictive admissions procedures at art schools, and the fact that a number of art institutions in the United States are billion-dollar nonprofit organizations. In the conversation between publisher Isabelle Graw and cultural theorist Joseph Vogl, the two discuss to what extent price fluctuations in the auction sphere are a result of knowledge and expertise or of opinions about opinions. They reflect on the relationship between capital and value generation, resentment and envy, and on the political risks and potential of digital communication via social media, as well as on the specific social affects they produce.

At once a call for solidarity and a reflection on their experiences in the art world, the roundtable discussion between the artists Jeankarlos Cruz, effi sleeps, and Polly Yim illustrates real instances of the mechanisms of envy. Recalling collective projects in which relationships that were initially trusting then turned sour and destructive, the three artists seek out alternatives to the artist-as-entrepreneur model that, in their experiences, exacerbates the divisive tendency of the art world. Their assessment articulates an uneasiness that served as the impetus for this issue. To talk about envy is, above all, to talk about the paradoxical criteria of an art system that generates dependencies that have a semblance of legitimacy – as long as “success” is considered an expression of artistic achievement. As all the essays in this issue demonstrate, envy is a social emotion that no one can evade entirely. When we desire what someone else calls their own, we make a claim that we’ve been unfairly denied advantages or access granted to others and, in doing so, reinforce the zero-sum logic of social advancement which holds that such advancement is intended only for a small few and always comes at the expense of others. 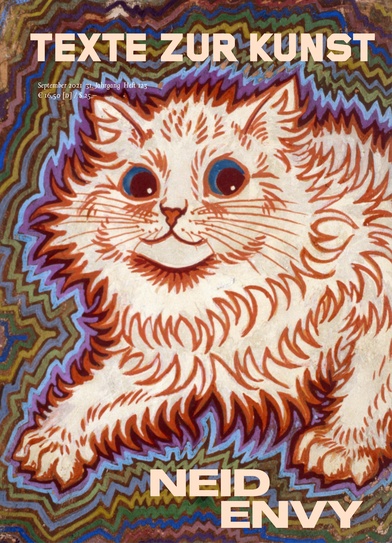