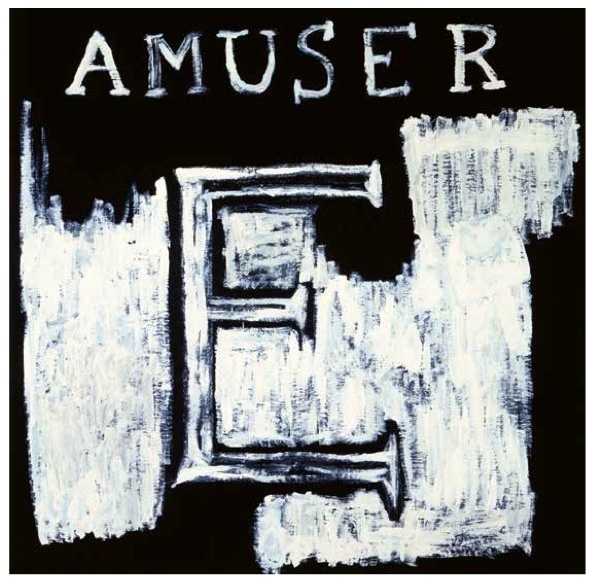 The Belgian artist Marcel Broodthaers’s grand retrospective at New York’s MoMA earlier this year introduced wide audiences to his oeuvre. But artists and critics (count me among them) have long been fond of his work, not least the witty and poetic installations he made in the 1960s and 1970s, which deftly blurred the distinctions between text, object, picture, and film. Broodthaers was also uniquely aware of the specific way in which art conformed to the commodity form, making his output seem especially relevant in a contemporary context. For example, when he performed his legendary public conversion from poet to visual artist in 1964, he claimed – not without a degree of irony – that it was solely motivated by economic considerations. Likewise, the invitation to his first exhibition noted that he hoped to “sell” something; to, for once in his life, be successful. Apparently, the self-image of the visual artist he adopted came with the prospect that he might finally start making some real money.

Questions of money and value were also pivotal for the “Musée d’Art Moderne, Département des Aigles,” which he founded a few years later – Broodthaers had official stationery printed on which he figured as its director – and which proved especially influential in its systematic abrogation of the boundaries separating different media. Between 1968 and 1972, several “sections” of the fictional museum were presented at various venues, ranging from the artist’s apartment in Brussels to the Kunsthalle Düsseldorf to Documenta 5 in Kassel. The project not only satirized the colonialist displays of ethnological collections (still prevalent at the time), with their fixation on different genres, it also poked fun at the abiding belief in the value (and significance) of the work of art. In one section, for example, each object was displayed with a label reading “This is not a work of art,” a disqualification that also alluded to Magritte’s “Ceci n’est pas une pipe” (This is not a pipe). In the 1990s, Broodthaers’s mock museum became a central point of reference for younger exponents of institutional critique such as Fareed Armaly, Christian Philipp Müller, and Renée Green. Other artists – Cosima von Bonin comes to mind – adopted his theatrical strategies of display.

This development has led art historians to associate Broodthaers primarily with historic institutional critique. While the retrospective at MoMA was the first to shift the emphasis toward the poetic dimension of his oeuvre, his practice as a painter, which also interests me, has been largely treated as marginal. This is surprising as numerous contemporary painters in recent years, including Wade Guyton, Michael Krebber, and Jutta Koether have taken inspiration from his painterly idiom and quoted his pictorial language or his motifs.

Although Broodthaers was not a painter in any conventional sense – he virtually never actually wielded a brush – his work attests to an ongoing preoccupation with the elements of painting, its grammar. Consider, for example, his 1967 film “Le corbeau et le renard” (The Crow and the Fox) based on La Fontaine’s fable of the same title, which he chose to project on a canvas, fusing the language of film with that of painting. Tellingly, he also modified the fable by introducing an “absent painter,” who may well have been Broodthaers himself. Note that he did not usually paint on his canvases; rather, he coated them with photographic emulsion to print them with words and letters. Especially interesting, to my mind, is the black-and-white painting “Amuser ou Le plus beau tableau du monde” (1967–70/1971–73), the most startling feature of which being a zone the artist conspicuously slathered with white paint. That, I’d argue, is Bad Painting avant la lettre: a picture that’s good by seemingly being bad (I’ll discuss the idea below). The label “Bad Painting” wasn’t coined until a few years later, when Marcia Tucker made it the title of an exhibition she curated in New York in 1978, and that show presented figurative painting, which “Amuser…,” a language painting, definitely isn’t. If, however, we take Bad Painting to mean – and this is the definition I propose – the deliberate rejection of modernist conventions such as the cult of flatness as well as the resulting subjection of painting to language and the renunciation of traditional painterly skills, then I believe “Amuser…” is a prime example.

The French verb amuser figures as something of a headline here, though one that was painted on by way of a decidedly amateurish imitation of printed letters. Further to this crudely painted piece of writing, a letter E appears embedded in a zone of perfunctorily daubed white paint. It is nevertheless a central visual motif, and so stands as the protagonist on this pictorial stage. It may seem odd that, out of all of Broodthaers’s works, this one rather unspectacular and even paltry-looking language painting would catch my eye. There’s nothing more to it than a word, a lone letter, and a rough smear of white paint. But it’s worth noting that the painting reprises a venerable tradition that goes back to classical antiquity (the close conjunction of painting and poetry in Horace’s famous dictum ut pictura poesis) and also animates Magritte’s language paintings (which Broodthaers frequently paraphrased) and the linguistic propositions of his fellow conceptualists (think of Lawrence Weiner or the group Art & Language). The crucial advantage of “Amuser…,” I would argue, is that while it resembles the paintings of conceptual art in transforming painting into a linguistic proposition, it leaves the meaning of that communication undetermined. Neither amuser nor the letter E make particular sense as messages unto themselves.

Concerning the picture’s genesis, the artist’s widow, Maria Gilissen, helpfully recalled that Broodthaers first placed the word muse on the canvas, complemented by the large E; together they would have spelled musée (museum). But his recent decision to demonstratively shut down the “Musée d’Art Moderne,” ostensibly due to bankruptcy, (pour cause de faillite) may have made that wordplay pointless: there no longer was a museum to be transposed by this picture into a pictorial space. So Broodthaers turned the muse into amuser, “to amuse,” alluding to the gradual metamorphosis of the public museum into a part of the entertainment sector whose first stirrings were felt in the early 1970s – a process that by now very much appears to have been completed. The fact that the picture was created over the course of several years – Broodthaers worked on it between 1967 and 1973 – similarly suggests that it captures the incipient structural transformation of the art world. Still, we can’t say with certainty whether Amuser… is intended to express cultural critique or affirmation: does it welcome or deplore the conversion of the art world into an entertainment industry? In this regard, the picture keeps its meaning on hold, which strikes me as a smart move on Broodthaers’s part.

When the picture was first on public display in 1974 as part of his exhibition “Éloge du sujet” at the Kunstmuseum Basel, the curator tellingly described it as being “ugly as sin.” Yet the artist and his curator in fact treasured this ugliness – the painting graced the front and back covers of the exhibition catalogue. More generally, Broodthaers was in the habit of making a statement only to swiftly contradict it. The most beautiful picture, in his world, could be the ugliest picture only a moment later, and bad painting could be good painting. By declining to commit to any single meaning, he also refused to cater to the desire for unambiguousness that audiences then as now bring to art and that tends to instrumentalize it.

But Amuser… stands out not only because it reduces painting to a vehicle for language, in violation of the modernist conviction that there is an immanent “essence” of painting. What makes it a truly exceptional picture is the abovementioned zone of white paint slathered on the canvas around the E with expressively gestural brushstrokes. The gesture is utterly atypical of Broodthaers, who otherwise took pains to avoid such tokens of expression in his work. In this instance, however, it looks like he meant to produce an emphatically amateurish suggestion of a painterly trace. By purposely botching the pictorial space that surrounds the E, he makes it tilt out of that space: it positively falls toward the space of the beholder, and it’s hard to resist the temptation to read this letter projecting from the picture out loud, as though we were looking at a spelling book for children. Painted pictures that integrate language generally give off the impression of speaking to us. Broodthaers, however, considerably heightens this effect with his mobile, ill-anchored E.

And then “Amuser…” matches my idea of good Bad Painting in yet another respect: it demonstratively fails to demonstrate any painterly skill. Such eschewal of technical expertise (known as “deskilling”) can easily turn into a sort of “reskilling,” as recent works that are recognizably inspired by Broodthaers’s language paintings illustrate. The deliberately gauche visual idiom of “Amuser…,” in particular, has long become an established painterly convention that artists like Michael Krebber have copy-and-pasted into their works. Similarly, the picture rides roughshod over traditional notions of “painterly composition,” treating the canvas like a blank sheet of paper to write on. Further, it does not capitalize on the vitalist potential of color. Rather, the dark ground simulates a blackboard of sorts onto which the artist wrote in chalk – except that in this case, the writing (unlike, say, Beuys’s) is without doctrine.

There is one final aspect that I believe adds to the picture’s great potential: The work –although it conceives of painting as a language, which is to say, treats it as a semiotic medium – resists the reduction of the painterly mode to mere linguistic signs as the semiotic perspective on painting tends to do. Returning to “Amuser…,” the zone of daubed paint reminds us of the peculiar materiality – indeed, the bodily quality – of the pictorial sign. Regardless of what and how such signs signify, we perceive them first and foremost as possessing a distinctive physical character, and it is this character that Broodthaers foregrounds. Then again, “Amuser…” stages this physical materiality of the pictorial sign with such crude ineptitude that we can only laugh about the vitalist projections we bring to the picture. The paint smear summons us to recognize the trace of the absent artist’s painterly act – yet the execution is so awkward and unappealing that the suggestion falters, and conspicuously so. We’re manifestly looking at an effect of painting that was deployed for our amusement. If the picture is literally amused by this coup, then we, too, are invited to laugh along.

This article is a translation of the original version, commissioned by Frankfurter Allgmeine Zeitung as part of their series "Der andere Kanon".