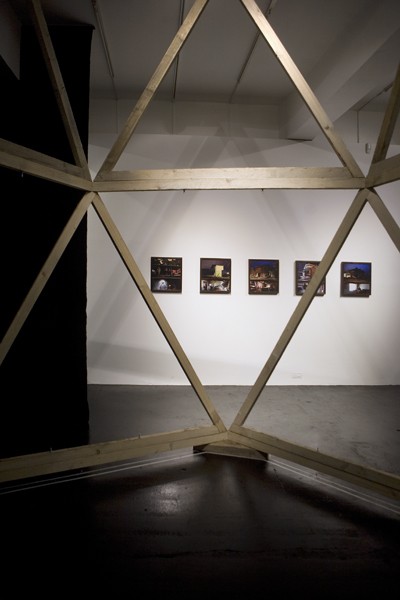 Through an act of sleight of hand, SEPTEMBER gallery in Berlin recently served as the site for three simultaneous solo exhibitions. In fact, the congregation of works, which were in various media and were created by four artists – two of whom comprise an artist pair (Katrin Lock & Tim Brotherton), occupied shared thematic territory; the initial confusion that visitors might have experienced in the gallery as to which artists produced which works and to which exhibition these belonged acted as a valuable indication of where to find meaning in works that regularly dealt with the relationship between subjects and contexts.

Pablo Zuleta Zahr’s exhibition “The Loss of All Certain, with the False and the Doubtful” consisted of two series of photographs, deriving from a recent visit that the artist made to his home country of Chile, and one video. One of the photographic series, entitled “Puppies in Torture Chambers” (2010), follows a group of children into the bunkers of Fort Borgoño in Talcahuano, which was used as a torture camp and a prison during the years of Pinochet’s military dictatorship. Since these photographs capture movement using a central light source directed out into the darkness, they depict figures and surfaces with a ghostly translucence. The resultant atmospheric gloom, although symbolically suggestive of the location’s horrific past, is in fact undermined by the innocence of the subjects that Zahr represents: the children, their playfulness, and the litter of puppies that they find inside the bunker. 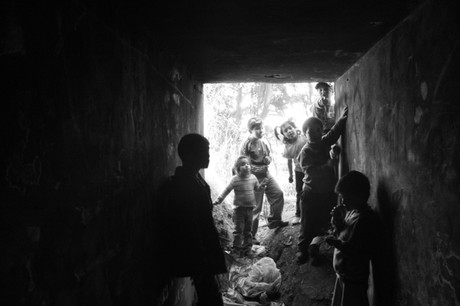 Such a process – by which the reality present at the moment of the works’ production can color and even subvert what the subject matter would otherwise indicate – also occurs in the series “Broken Homes” (2010). Here, portraits depict inhabitants from a village in their homes, all of which were destroyed by the earthquake and the tsunami that wrecked the area around Talcahuano in 2010. Zahr’s subjects – one of whom peers out from behind a chaotic mess of upturned mattresses, soaked and stained linens, and other debris; another of whom sits beside a tarp-covered window in a room emptied of most its contents – have achieved a particular union with their environment; for, the entire community survived the disastrous course of events by evacuating the town in direct opposition to the government’s advisory to stay, and, in that this destroyed landscape is clearly unfit for inhabitation, these individuals are once again defined by their defiant gesture of occupation. This human drama is represented in a series of five diptychs, where vivid color photographs taken, remarkably, only by natural light capture the devastated houses, which stand – defiant of the crippled integrity of their structures – before an electric blue sky. 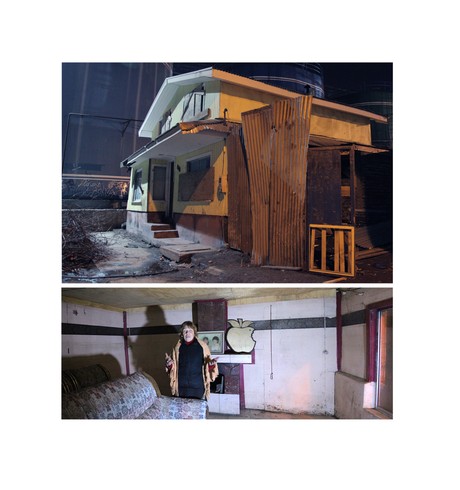 In Zahr’s video work “Phantom Limb” (2003), a man pantomimes a gesture of binding his hand into a fist by sewing together his palm and his fingers – fingers, which, through genetic defect or injury, are malformed. In the moment when he mimics, albeit farcically, a grimace of pain as he first pokes the imaginary needle through his palm, the man conjures up reality – in terms of the trauma accompanying his loss; moreover, the gesture of binding denotes his specific impairment. The absent limb and its usage, here evoked through a performative gesture of pantomime, is thus resurrected, making visible what is an immaterial, but fundamental, aspect of the man’s individual experience. 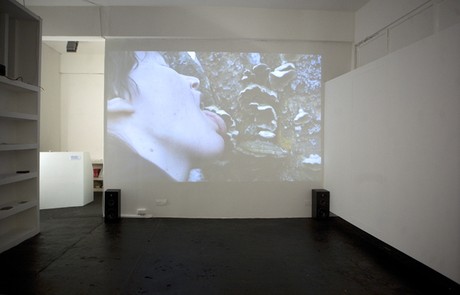 Whereas the other video work found in the gallery, “Sporing Lips of Transposed Desire” (2011), technically belonged to the solo exhibition “Essaying Performative Constructions” by Malin Arnell, it was in fact a collaboration between Arnell and Zahr. Shot in the woods, the video follows a hand-held camera’s voyeuristic view of Arnell as she approaches a tree, embraces it, and then proceeds to kiss, lick, and suck on the fungus that grows at head-height along its trunk and branches. Following its title’s indication that it represents an act of desire transposed and its explication in the gallery press release as a depiction of “autoerotic fantasies” performed, the work similarly revisited the logic which said that environment – in this case it is a wholly natural environment – and identity can blend together. What differentiated this video from the aforementioned works by Zahr, however, was Arnell’s performance of a sexual gesture; the equation of nature and individual was here compounded by a woman’s performance of a sexual act intended for a woman, indicating an inherently queer, and particularly cogent, dimension of Arnell’s work.

Standing across from the wall-sized projection of Arnell’s video was a two-tiered wooden structure. With a broad pentagonal base, a triangular latticework body, and rows of parallel bars like a ladder along a part of each tier, the structure clearly supported climbing; however, relocated from a specific context – presumably outdoors – its intended purpose could have been variously conceivable as a tower for observation, a structure to be played on, a raised retreat, or unnamed others. This multiplicity of uses in combination with the disruption of viewers’ expectations regarding what belongs indoors and what belongs outdoors contributed to the aforementioned thematic territory, although not with the same degree of provocation as the artist’s video work. 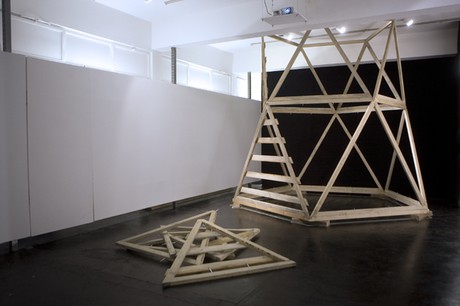 Where the construction did accomplish a level of formal intrigue beyond the architectural was in the pieces that lay on the floor before it. More than simply suggestions that the structure was in the process of either being built or being disassembled, the pieces – of geometrical design – lay across each other in such a way as to combine and evoke, surreptitiously, connotations of various symbols: whereas the press text related their triangular shape to the pink triangle used by the Nazis to identify gay men, the superimposition of two triangular elements suggested the Star of David; or, deviating only slightly from that form, one can imagine the rather illicit shape of a pentagram. By allowing the invocation of groups and ideologies of stark historical contrast and political difference through slight deviations to her formal elements, Arnell called upon the malleability of identity.

For in this presentation at SEPTEMBER, it was precisely this malleability – between one identity and another, between an individual and his or her environment, between a history and a reality – that was compellingly mimicked and supported by the sometimes-indistinct separation between artists and works. By embracing the very disintegration of the discreteness of works and working practices, Zahr, Arnell, and the organizers of the space invested in a complex, surprising, and revealing experience of these works, which benefited from interpretation on the basis of comparison as well as presentation in an environment alive with interconnection.

Pablo Zuleta Zahr, “The Loss of All Certain, with the False and the Doubtful” and Malin Arnell, “Essaying Performative Construction”, SEPTEMBER, Berlin, June 25–August 13, 2011.