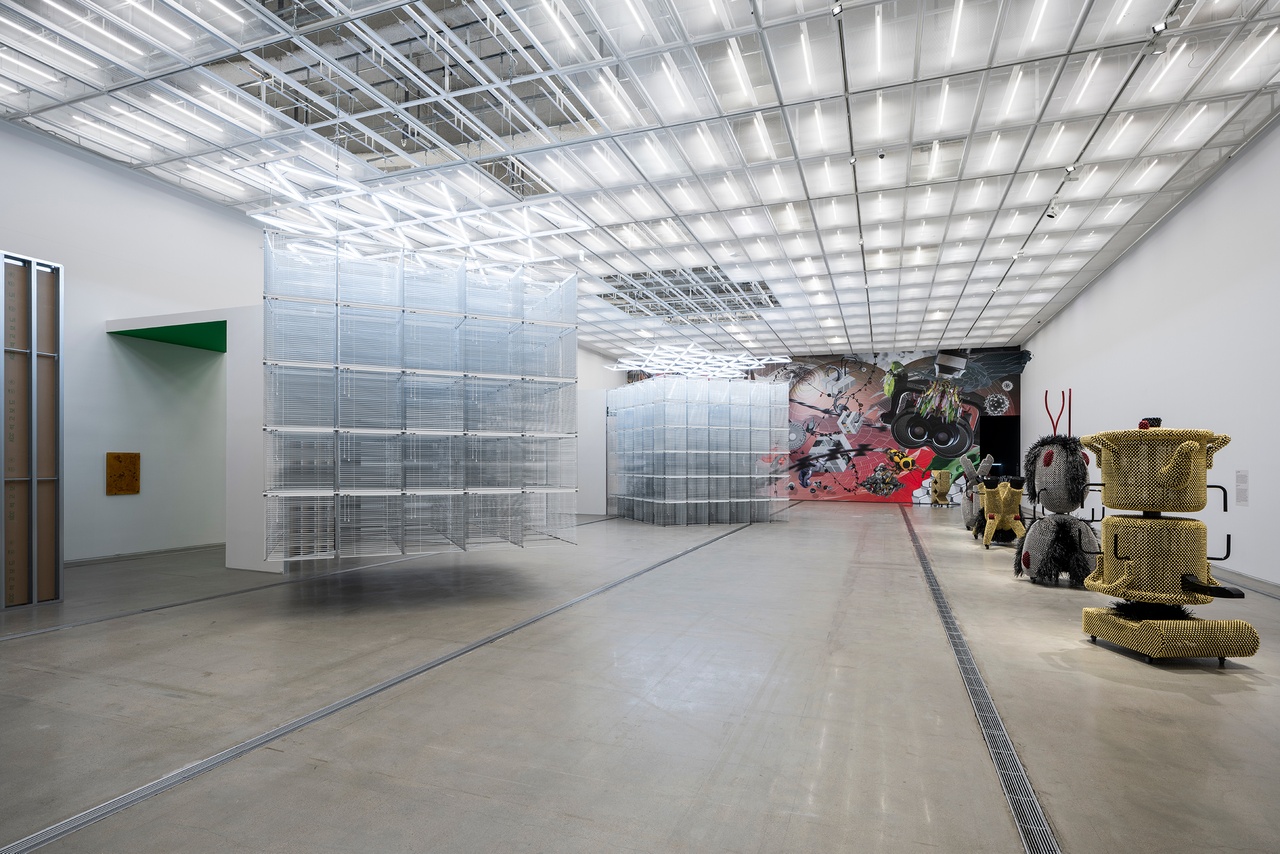 Air and water, two chemicals vital for life, establish the conceptual thread around which Haegue Yang’s recent solo exhibition in Seoul revolved. These two elements, however, remained elusive in the galleries; the artist’s eponymous sculpture was conspicuously absent, though not by oversight. Art historian and curator Harry C. H. Choi examines the significance of this choice, pointing to the artist’s practice of experimentation, association, and variation. At the MMCA, Yang’s experiments comprise a trial for their own sake, writes Choi, displaying an expansionist approach that will persist until she approaches a perhaps implausible end of complete exhaustion.

There is no sighting of Air and Water (2002) in “Haegue Yang: O₂ & H₂O,” the artist’s latest solo presentation in her native Seoul. That Yang did not include this early project – a custom-made pair of shelving racks, both of which are rendered devoid of function as one has too many shelves and the other none – might seem inconsequential despite the title’s instantaneous connection to the exhibition. After all, it is customary for artists to edit out works that, in hindsight, had not yet reached a desired level of maturity.

This curious and somewhat ironic act of self-erasure is nonetheless telling, for it speaks copiously to the ways in which Yang’s system of references develops. Hers is an associative and accumulative one, whereby the artist revisits and tweaks allusions that have occupied her previous works – whether it be the notion of folding/unfolding, the enigmatic prefix quasi, or the multifaceted Korean composer Isang Yun – to generate numerous points of encounters with these subjects in varying manifestations. Such is also the case with the artist’s interest in the most essential chemicals for living forms. While the homonymous sculpture now belongs to an installation named Storage Piece (2004), for which Yang cobbled together all of her unsold works from that time onto wooden pallets and presented them in their packaged state, the artist returns to the reference in the title of this one-person show. Yang’s works, indeed, are constantly in disguise.

For the critic, the artist’s exhibitions thus present an exercise in delineation, a process of tracing and parsing how ancestral forms have been transfigured to give rise to her recent projects. As an amalgamation of Yang’s heterogenous experiments, “O₂ & H₂O” also presented ongoing bodies of work that were expanded and reconfigured according to the setting of the exhibition. Such a reading, however, did not immediately appear pertinent to the first work on view, Silo of Silence – Clicked Core (2017), as the installation, previously exhibited at the KINDL in Berlin, was not modified for the architectural conditions of the MMCA Seoul. And yet as a work that introduces Yang’s practice to the untrained audience, it was an apt point of entry that concentrates on her fascination with the materiality and porosity of venetian blinds. 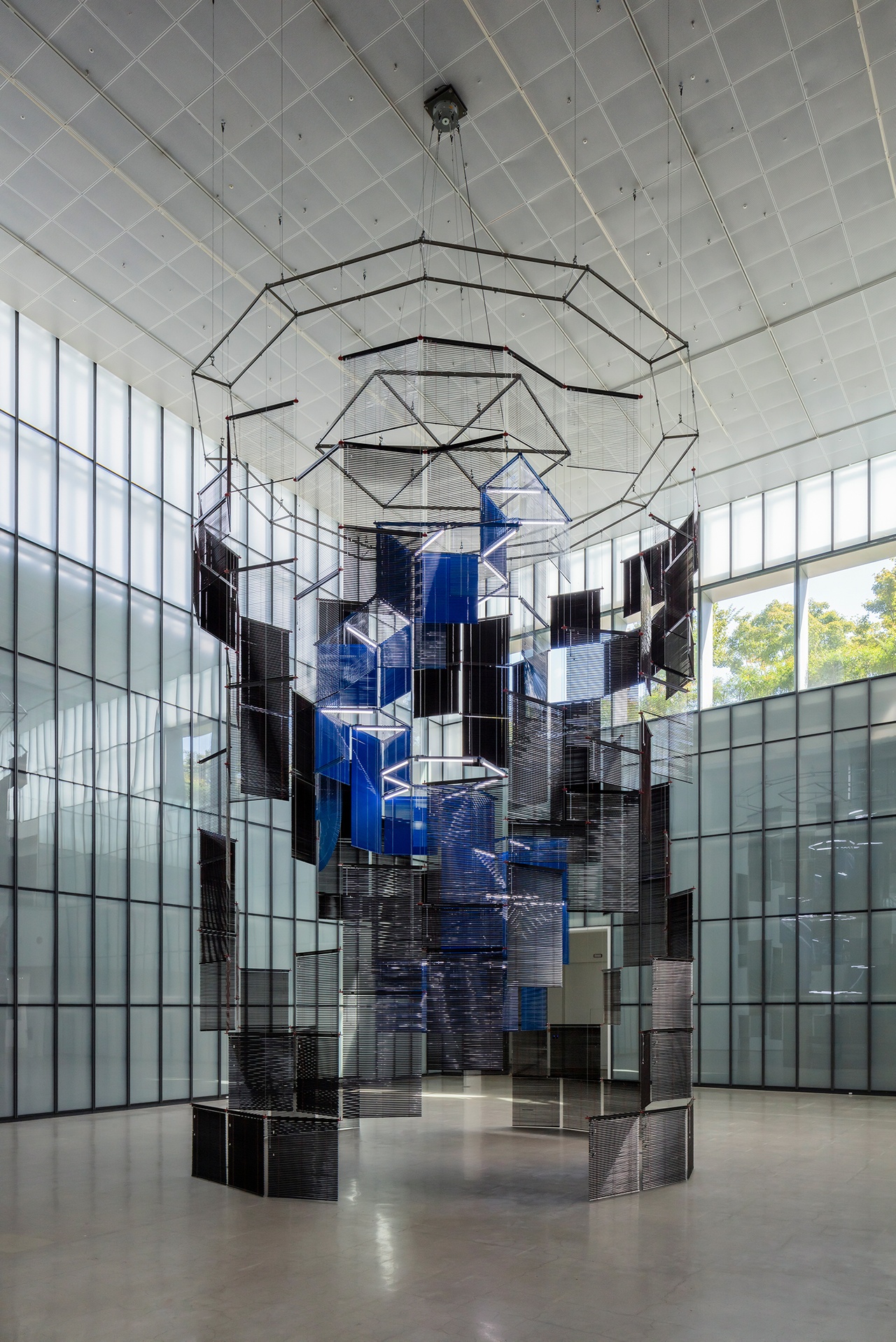 In Silo of Silence, two concentric dodecagons are hung from the ceiling to create a floating frame, from which inner and outer layers of blinds are suspended to produce a permeable cylindrical structure. Unlike the black outer layer that stands still and quivers ever so slightly with the flow of air, the cobalt blue inner layer is connected to a motor that enables it to rotate languidly, as if replicating the perambulations of a pensive spectator within the gallery. In contrast to Yang’s previous explorations of motorized movements – as in Approaching: Choreography Engineered in Never-Past Tense (2012) and Three Folds and Multiple Twists (2013) – the blinds in this installation do not suddenly jerk to a halt or twist their shapes, but rather revolve around at a pace that is almost imperceptible to the viewer strolling around them. If the motors of the earlier iterations asserted their industrial origins by accentuating the mechanical nature of their sound and motion, those in Silo of Silence were choreographed to let the blinds pirouette in silence, seamlessly and endlessly.

The buildup of Yang’s language continued in the main gallery, which was divided threefold to accommodate arrangements of discrete works. The open plan that constituted the largest room was populated by a series of large-scale sculptures and installations against the backdrop of a dizzying, fantastical wallpaper, DMZ Un-Do (2020). While Yang’s earlier sonic sculptures, which are covered with miniature bells to generate rattling sounds when activated, were conceived as wearable ornaments (Sonicwear, 2013–), reproductions of costumes used for Oskar Schlemmer’s 1922 Triadic Ballet (Boxing Ballet, 2013–2015), or even outsized re-creations of Sophie Taeuber-Arp’s 1916 Coupe Dada (Sonic Coupe, 2019–), the present variations are focused on the domestic: each of the four sculptures that comprise the Sonic Domesticus series (2020) refers to a specific household item, such as a pair of scissors or a metal pot, which is enlarged and abstracted so that little of the original signifier remains intact.

Moreover, unlike other sculptures in Yang’s ongoing series Sol LeWitt Upside Down (2015–) that were either suspended from the ceiling or installed to butt up against a wall, the sides of the two cubical “Sol LeWitts” in this room were adjacent to those of Chroma Key Wall Body Passage (2020), passageways of various heights and colors built from drywall that duplicate the odd depth of the entrance wall – unexpectedly insinuating that these distinct works might be part and parcel of each other. And indeed they are, at least conceptually, since the plasterboard constructions also exemplify the evolutionary trajectory of Yang’s formal language: as early as her solo presentation “Arrivals” at Kunsthaus Bregenz in 2011, the artist used wooden walls cut into sizable triangles and trapezoids to respond to the architectural conditions of the site of the exhibition. 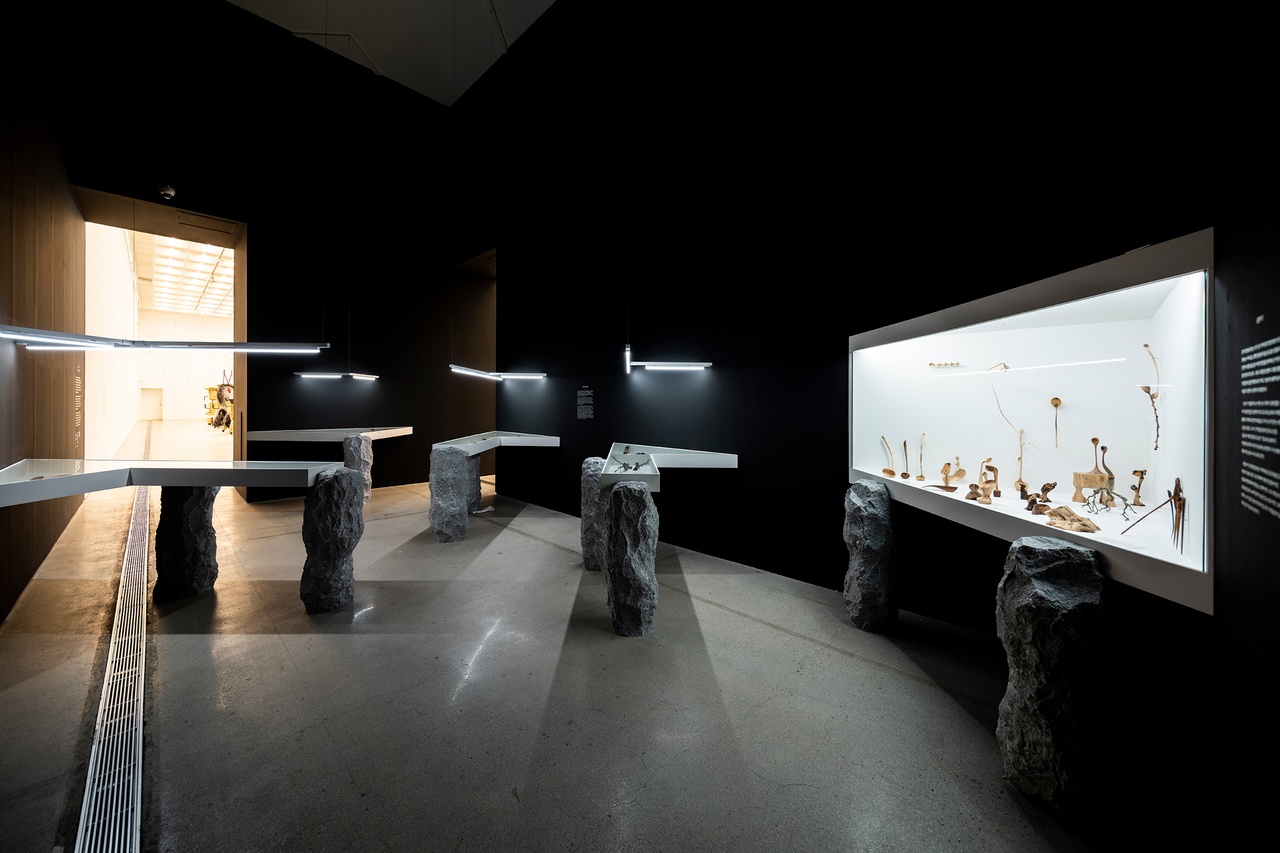 Such variations, admittedly, might register not as marks of change but as elevated forms of repetition. This is particularly the case for those who are not familiar with the full arc of Yang’s oeuvre, as well as those who are skeptical of the omnipresence of her sculptures – despite the ongoing global pandemic that made transcontinental travel a near-impossible task, “O₂ & H₂O” was in fact synchronous with solo exhibitions at Tate St. Ives, the Art Gallery of Ontario, and the Museum of Contemporary Art and Design, Manila. On the surface, these exhibitions did not differ from each other substantially, as they offered similar signature cross-sections of Yang’s practice, complete with a series of venetian blind installations, bell sculptures, and wallpaper.

But even among these shows that visually resemble each other, Yang leaves room for a sensibility of experimentation that is almost juvenile at times, supplying a respite from the resolved quality of her large-scale installations. Within the Seoul exhibition, such freshness came alive at the very end. In the last room of the main gallery were 108 wooden spoons that were carved by her longtime acquaintance Woohee Kim – a surprising shift in formal language, as the prior room featured the ongoing series of artificial straw sculptures titled The Intermediates (2015–). Placed next to labels that shared tidbits of observations and ruminations by Kim, the spoons were non-functional in various ways, some with holes in their bowls and others too crooked in their natural shapes. Even though these deformed and misaligned spoons were presented rather formally in glass vitrines, the incorporation of Kim’s craft, as an artistic gesture, seemed far more provisional and far less deliberate, carrying none of the conceptual baggage that is characteristic of Yang’s practice.

The open-ended sensibility was also noticeable in the series of five banners installed in the corridor connected to this last room, Five Doing Undoing (2020), which were attached to balloons to keep them afloat. Each of these rather gaudy and kitsch posters featured “secular” connotations of water, wood, fire, earth, and metal that comprise the essential elements of life in Eastern philosophy: earth, for instance, was visualized through real estate, land speculation, feng shui, manure, and earthworms. These experiments, as a whole, comprised a trial for their own sake, signaling that the artist’s expansionist approach will persist until she approaches (the perhaps implausible end of) complete exhaustion. Unlike the humble glass vitrine with an assortment of works from the artist’s student years, An Anthology of Haegue Archives (1998), the anthology of Yang’s protean vocabulary continues to grow.

Harry C. H. Choi is an art historian and curator based in San Francisco and Seoul who is pursuing a PhD in Art History at Stanford University.