Does the word 'depression', when pressed into double service to adumbrate both sunken spirits and leaden markets, tell us more about the anthropomorphizing of the economy or about the modelling of human nature on economic categories? Or is the primacy here a moot point, when the conflation of human nature and the market has been the tenacious core of capitalist ideology from the start? The separation of the economy from the rest of social life, a sphere which then comes to increasingly mould social life in its likeness, is of course an eminently superstitious gesture, and the late and undead neoliberal era can call to mind the Counter-Reformation, this time with financialized piety and value-added bloodshed. So much the better then that the exhibition is staged in a gently decaying 18th century manse in the vitrified bourgeois idyll of Maastricht, redolent of Baroque mummery and parqueted manners. Curators Lisette Smits and Dan Kidner mention in their exhibition notes that 'the current global financial crisis' is 'not the impetus for the exhibition' but 'proves a timely backdrop to the exhibition’s title'. Here the financial crisis sneaks in as scenery, a rich velvet drapery to set off the exhibition as the anamorphic skull in the foreground.

But the idea of finance as a metronome of the human condition does not exhaust the show's thematics. 'Depression' is also figured as the archetypal disease of the 20th century, with its turbulent politics and aesthetics; and also as a means to counter the positivism that imbues contemporary art's appropriation of, and healthy speculation with, the 'failed utopias' of the historic avant-garde. Such an idée fixe gets used, in Hal Foster's words, 'sometimes homeopathically, sometimes apotropaically' to ward off an encounter with the depleted conditions for either memory or critique for contemporary art and its curation. Rather than mourning for or domesticating modernist tropes, the exhibition proposes 'depression' as a metonymic texture that can get artwork by the likes of Jim Shaw and Lee Lozano into the same room and into some kind of imaginary dialogue – the rigorous, demotic self-revelation of Lozano in her journal entries-turned-pieces („Take Possession Piece #3“ (1969) and „Untitled (Piece, Lace Piece, Withdrawal Piece, Transistor Radio Piece)“ (1969)), her print of manual tools („Untitled“ (1964)), and the woman's head in a vice by Shaw („Vice Head“ (2006)) is one such oblique array. A number of further symmetries emerge over the course of the show, in keeping with its allegorical spirit. The chief two are doubling, with Barbara Visser's „Boris“ (1991-2006), a photographic portrait of a wax figure of Boris Becker, Alighiero e Boetti's postcard self-portrait as a twin („Gemelli“ (1968)) and Alan Michael's paintings with their frenzy of reflective surfaces („Piccadilly Circus, Night“ (2009); „Cars and Houses“ (2008)); spatial puns, such as the shelf comprising the other part of Visser's piece rendering it a third window between the two in the wall already, or the extruded plaster breast in Seth Price's „Untitled" (2008) echoing the fruit molded in plaster over several doorways; and membra disjecta, body parts scattered throughout the show like the Price breast, the forearms and torso in Stephan Dillemuth's installation upstairs, Jim Shaw's head, and Gillian Carnegie's „Untitle“ (2008), which is a bottom.* Another of the show's chief tendencies is its sullying of minimalist pathos with deadly gags and unctuous functionalism, like those of Tatham and O'Sullivan, who are prone to drawing little faces on their minimalist sculptures, („Three Lean Meanings and Other Feelings: Untitled“ (2009)) and Nairy Baghramian, whose „Türsteher (Bouncer)“ (2008)) and stools („Door Stools (Stool on the left, Stool on the right)“ (2006)) create irrational extensions in space. They wedge into door frames, offering to help but obtruding, like Judd's 'specific objects' gone paranoid – the stools are swollen, and the adapted door frame hovers like a reaper's scythe. While both Tatham and O'Sullivan and Baghramian play up the humorous dimension of Fried's curse of theatricality (the mute object appeals with a smiley face, the brushed steel sculpture pounces on the visitor as she steps through a doorway), it is Baghramian's work which is more effective, given the stage-setting of the whole exhibition. The amiable townhouse spaces of Marres are infested by Baghramian's paradox of décor, which Stephan Dillemuth takes up in a different key on the second floor. 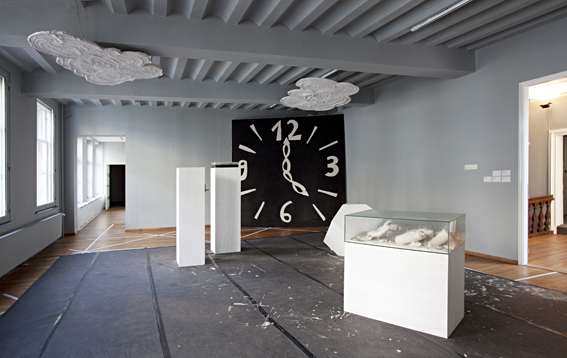 The exhibition's nod to dramaturgy is extended by Dillemuth as he fills the entire upper story with an installation composed of disparate works, some older and some made especially for the show, that seek to conjure a freshly dead social system with totems such as a giant painted clock, plaster clouds with embedded speakers, and dismembered arms clawing in the dust, as well as objects of modern science, such as the screeching sound of an MRI scanner, emitted by turning a crank fixed to the side of a plinth. The Dillemuth room seems to exemplify the curators' interest in giving a macabre or burlesque spin to formalist impulses, an urge native also to Dillemuth's deflationary narratives of bohemian social ferment and artistic genius as capitalist shamanism. The financial markets as scenes of dialectical morality plays, yielding narratives of triumph and anguish that evoke the metaphors of religion, now forms the object of study of 'behavioural economics', an emerging discipline which seeks to temper neoclassical dogma with a combined thrust from the pseudo-science of economics and the pseudo-science of social psychology. The tragedy of herd cupidity is depicted in „Failure to Control the Animal Spirits (2)“ (2009), which updates Hans Haacke's "Condensation Cube" for an era of stockmarket woe – the disembodied forearms of traders claw disconsolately at a clay floor, like living lobsters in the aquarium of an upmarket restaurant. „495 Jahre im Schatten eines abgestumpften Rhomboeder“ (495 Years in the Shadow of a Truncated Rhombohedron) (2009) is a cast of a male torso trapped underneath a rhomboid, both in white plaster, with the rhomboid taken straight from its symbolic significance in Albrecht Dürer's Melancholia print. Yet the connotation of the rhomboid here remains at issue – it could as easily be an asteroid of art market failure as the intolerable burden of 20th century abstraction.

The emphasis on drama continues with the two moving image works in the show, Melanie Gilligan's „Crisis in the Credit System“ (2008) and Anja Kirschner and David Panos' „The Last Days of Jack Sheppard“ (2009). Playing in rooms at the end of two separate corridors branching off from the main space, the two films are each preoccupied with the relationship of capital to fiction. Gilligan makes the most of market necromancy and its inflections as role-playing, story-telling and psychic disorder, and Panos and Kirschner seek to animate Hogarth prints with Marxist dialectics and postmodernist form a la Jarman, Michael Clark, or Adam Ant. The marriage of collage aesthetics with allegory does not stop with this work, as several Karl Holmqvist pieces downstairs demonstrate. The blown-up photocopies of his publication „Cat People“ (2006), mounted on the walls of one of the rooms and peeling slightly as posters in the garden (they are also scattered over the floor), as well as the 'Lettrist' sculptures that condense two words into afused letter shapes wrapped in foil („Lettriste sculpture (FUCK), Lettriste sculpture (LUCK)“ (2008)) and the poly-autographed Patti Smith Horses CD (2008) in a perspex cube on a plinth, all bespeak an intensity of 'info poisoning', such as that cited by Lee Lozano in one of the texts shown here. Like Lozano's 1971 note to self 'I WILL MAKE MYSELF EMPTY TO RECEIVE COSMIC INFO', Holmqvist's pastiched fragments channel pop culture detritus past and present into a series of hurtfully catchy mantras and refrains, degrading them further with the 'poor materials' of the photocopy – although such poor materials would have to turn into traces of their missing progenitor to become rich pickings on the art market, as Lozano's 'exhibition copy' journal entries have.

If „Depression“ sets its sights on gauging the psychosomatic condition of the present, it does this sideways, through a generous seam of associative logic which is sometimes hard to grasp. It grounds the hypostases of form in fables of abundance and scarcity, euphoria and gloom, with 'depression' as the name of the relation between these, the mood swing itself rather than the nadir of mood, and it could be said that it is the unpredictability of this motion that keeps faith in art and markets burning bright in times such as these – fata morgana – in keeping with the naturalisation of market laws as destiny. It nonetheless manages to deflect the mimetic modernism, which is the holding pattern for many curatorial gestures that attempt to give a social and political exegesis to form. Though it is doubtful whether 'specific objects' can still ground art's claim to autonomy, when the claim to autonomy is either the distinguishing mark of an asset class or a foolish prejudice to be subsumed in agendas of social betterment, the specificity of the works in this show indicates a commitment to both opacity and argument – the spirit, if not the letter, of modernism under these circumstances, in this politely haunted house which you can think of as either capitalism or Marres.

Notes
*Carnegie's 2005 nomination for the Turner Prize was memorably glossed by Britain's Daily Mirror tabloid as 'Arse for Art's Sake'.