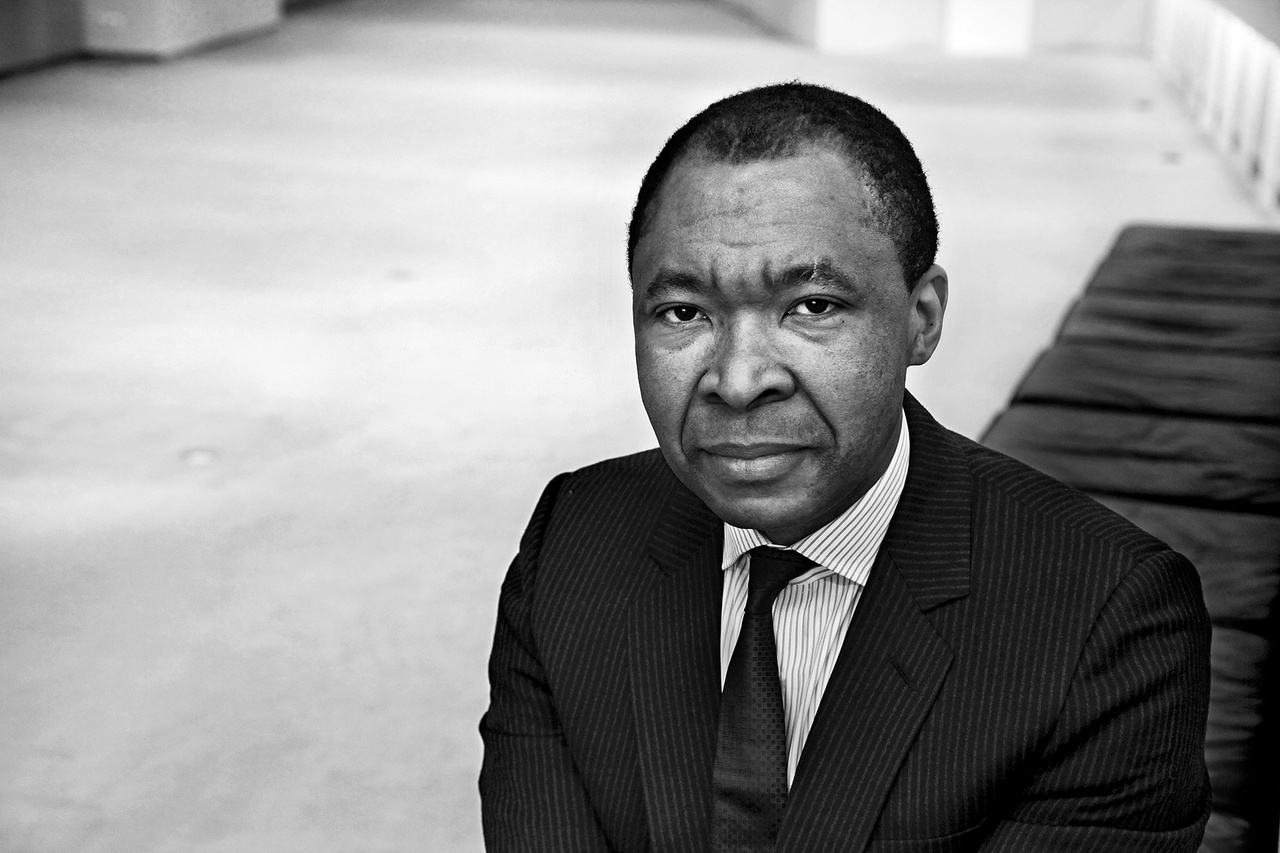 One can never be sure what anyone will say or write about oneself when we each are gone. This is an experience faced by every living one.

For more than a month now I’ve attempted to put into words reflections about Okwui Enwezor, Okwui.

My initial reactions when I received news of his death were sadness and surprise, despite knowing that he’d been ill for some time. My immediate impulse was to write to friends in London, to be in touch, as through the years we’d all worked with Okwui, and they were in the midst of working on a project that Okwui had encouraged. “A request became a bequest,” I wrote. He was important to each of us in different ways, variously, through time.

Where to begin, in terms of speaking about this person who I’d known at different times under different conditions and in different parts of the world for more than 25 years?

I learned that the poet W. S. Merwin died the same day. I wondered what Okwui might think about that. A strange thought, I realized, as he couldn’t wonder about it. The realization of his death is taking time, his presence was at one time so vivid. Complex feelings amid sadness.

When I think about Okwui, I always remember him in active relation to contexts and places, in his particular way, with brio. This is how I picture him.

I try to think back in time to when I first met him. It was in New York, although I don’t have a clear impression of a first meeting. He seemed to appear fully formed, as himself. This self was engaged in cultural productions. I am looking at a 1993 publication in which his name appears, in a 1993 issue of the journal the portable lower east side. One of the guest co-editors was my friend Joe Wood. The theme of this issue: New Africa. I find it an interesting document. His contribution is a poem, “tombs and flowers [for lionel teko].” His byline: “Okwui Enwezor is an Igbo poet from Nigeria who currently lives in Brooklyn.” I find this touching, when I think of the years ahead of him, all of his efforts, the distances he traveled, the many conversations, negotiations, battles, writings, exhibitions, catalogues, and all that filled them, until his departure.

The scope of what he lived is vast, as is what he opened. It will take some time to ponder carefully the range of his ambitions and his accomplishments, as well as the unfinished tasks and conversations.

There had been a time when I’d see him nearly every day, but we hadn’t been in conversation regularly for some time, although I always wished him the best, and I felt that this was a mutual sentiment. I remembered moments of his gleeful excitement and laughter, particularly when describing a book that sparked his interest. Two came to mind, Blink: The Power of Thinking Without Thinking, by Malcolm Gladwell, and Disgrace by J. M. Coetzee. This was back in 2005. San Francisco times, then.

There was an Okwui that was very much created by the mediatized public views. Always a story for someone to relay, of some impression created by Okwui, or hearsay, or something animating to talk, talk, talk about.

Yet something is missing, I noted while reading the memorials. What? A mutual friend mentioned to me how surprised he’d been at the lack of depth or scope in terms of descriptions of Okwui’s role and legacy in what he’d read so far. I think that it will take time to realize the extent of what he generated and achieved, as well as to acknowledge that such a seemingly irrepressible and distinctive force is gone. Yet his very particular ways of sociality and the effects of his having passed through many lives will linger on in many memories.

I prefer to remember and reflect upon what I noted about Okwui in personal episodes; specific ones, that give other dimensions to ponder. I perceived some of the complexities he grappled with in person, often, traversing the intricate rituals of many worlds and languages. “Big lives.” A concept he mentioned as an umbrella to place over the tangled inheritances, diasporic and exilic contingencies necessitating temporary inhabitation in many worlds. A concept I could understand. Yet each person’s ways of navigating these are unique. It was most fascinating to witness Okwui rising to challenges, as well as exceeding what may have been imagined, both publicly and personally.

I’m not interested in the anecdotal, as this can abound. I like to think about Okwui in relation to places. I try to imagine whether there were things I’d like to have said to him that I didn’t say. What I’m writing is speculative, based on my perceptions of certain moments, and what I wondered about.

What I found, finding him gone, are books in my library. Many heavy catalogues, hard to carry while traveling, and the small red journal with white type I mentioned above, New Africa. I read Disgrace. And The Fateful Triangle, by Stuart Hall (edited by Kobena Mercer), to remember both Stuart’s and Okwui’s voices, our conversations, lunching in Vienna at the Academy of Fine Arts, during one of the ambitious Documenta11 “Platforms,” following a panel discussion, now historic, that included Stuart Hall and Immanuel Wallerstein. I dig out the corresponding book that was published as part of the Platform series, Democracy Unrealized_Platform 1. I read the names of the seven editors, Okwui’s heading the list, flip to the table of contents, and find the texts that can be read now, differently than in the immediate moment of their publication in 2002; the panel entitled “Democracy Unrealized: Alternatives, Limits, New Horizons” includes contributions, in addition to those by Hall and Wallerstein, by Akeel Bilgrami, Bhikhu Parekh, Slavoj Žižek, and Chantal Mouffe. The writings are now a reference and indicate a legacy bridging C20 and C21, available still to be read and studied.

To write this text it was important to think with others whose voices I wanted to hear in relation to the traces I found of Okwui’s voice. I read from my library. Some of these other voices could offer perspectives about the world we grew into inhabiting, in ways that could be found in the words they’d written or spoken, even before we were born. Two were New Yorkers. Another was Jamaican-born, yet exiled in the UK. And there were conversants, other “big-lived” people of combination backgrounds of a diasporic mixture hailing from the UK, all of Africa, all of Asia, the Caribbean, the Indian Ocean, the Pacific Ocean, the Americas, the Arab region, all of Europe, sometimes living in the US, sometimes living in Europe. A necessary mixture of informed and nuanced perspectives, able to knowledgeably address many forms of complexity, without reduction. Exceeding some of the deficits of presumptive perceiving or misrecognitions I’d witnessed over the years, in different places, regarding perceptions of Okwui and his project.

Again, I don’t remember the first time I met Okwui. In New York I used to bump into him. Once, at night, walking on Lafayette St. with my friend, the writer and editor Joe Wood. Nka was already underway. There was a discussion of a book proposal. It was possible to disagree, I recall, as varieties of perspectives were burgeoning. Okwui was undaunted by debate and disagreement, which he later embraced as an enabling aspect of “antinomies.” I liked this aspect very much about him. It was possible to wrestle with him in terms of perspectives, yet continue throughout in good humor.

Once we were on a jury together in Vienna. We each had candidates we wanted to be selected. Neither of us would give in, yet ultimately we found a solution, after long discussion and trading. Negotiating, in contact zones.

We worked together in different ways through time. In 1997 for the first time, when Okwui and Octavio Zaya invited me to participate in the second (and last) Johannesburg Biennale. A fascinating experience on many accounts. No matter what happened, Okwui was unflappable. I was also invited by Okwui to participate in Documenta 11, and in 2006 I worked with him again as an artist participating in a very fraught Biennale in Sevilla, amid local anti-Biennale protests, which he tried to assuage.

I also witnessed other dimensions of Okwui, in his role as Dean of Academic Affairs at the San Francisco Art Institute, where he invited me to join him. I did, and I gained renewed respect for him, as well as indications of the difficulties he faced.

It is impossible to relay Okwui’s many modes. He had a philosophical perspective regarding ways he imagined living, his ethical and aesthetic sensibilities, which weren’t necessarily shared by some in his midst. What I greatly enjoyed was the range of his circulatory sense and curiosity.

I was happy that he landed Munich’s Haus der Kunst artistic directorship. He needed his own institution to direct. What he was able to accomplish in relation to his broad, encompassing vision often proved to be historically significant. I’m thinking also of his tenure at the International Center of Photography in New York and his massive work there, amid other simultaneous projects and writings.

I last saw Okwui in Venice in 2015. I congratulated him on all he was able to accomplish since I’d seen him last. We hadn’t spoken much after he’d moved from San Francisco. He’d invited me to participate in a Triennial in Paris, but it didn’t work out. No hard feelings. The last project I’d participated in with him, during his Munich life-phase, was for his ECM: A Cultural Archaeology book. [1] I contributed images and an essay.

He continues in my thoughts and in my writings. “Other Planes of There,” the essay I wrote reflecting on Documenta 11, is also included in the eponymously titled book of my selected writings. Okwui Enwezor’s access opened access to allow, in our contemporary moments, innumerable “unfinished conversations” to take place. He did rise to many challenges, and he did “ride the tiger.” I see him continuing, traveling through other planes of there, where we can seek his traces.

Renée Green is an artist, writer, and filmmaker.