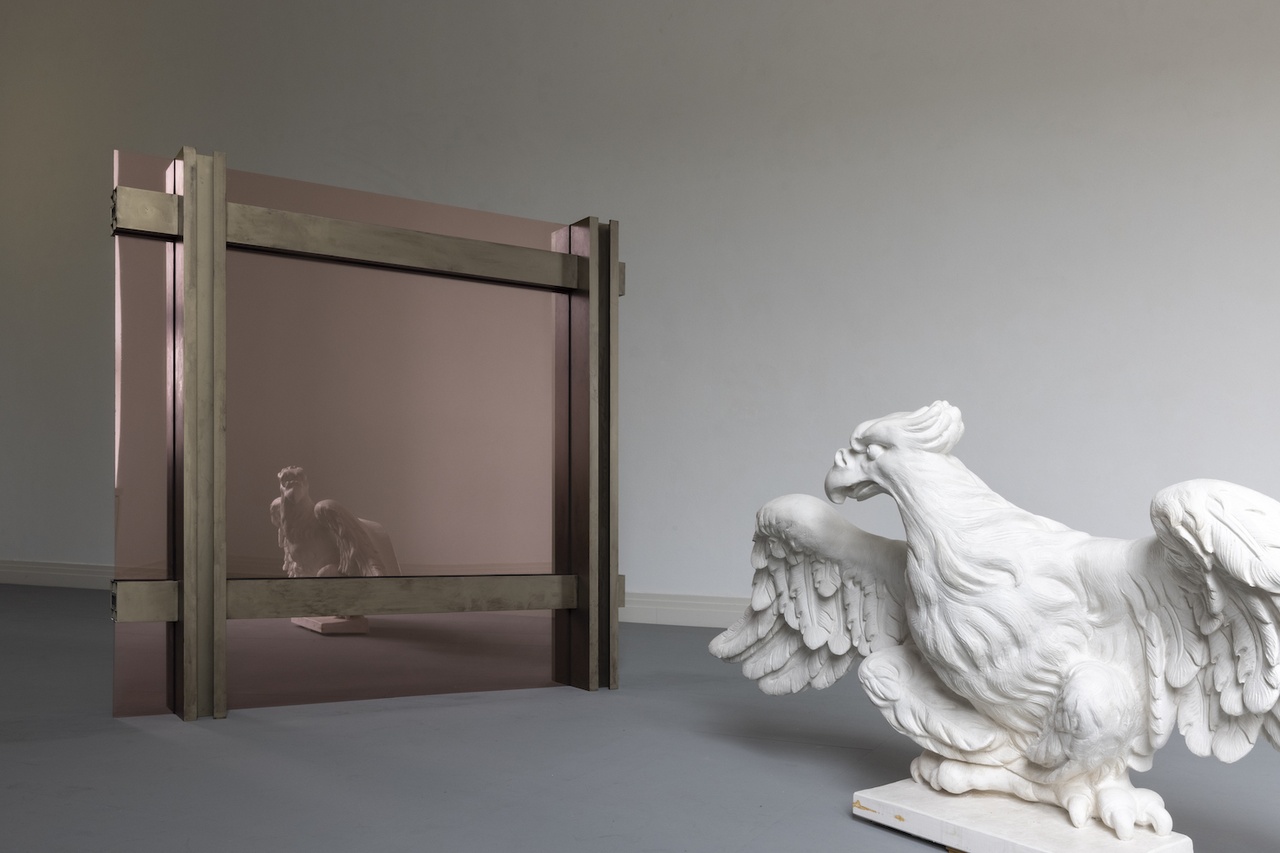 The recently reconstructed Berliner Schloss and the Humboldt Forum, the institution now housed within it, have been rife with controversy. The development of this site – from the Hohenzollern residence to the German Democratic Republic’s Palast der Republik to the rebuilt and repurposed Schloss – is the subject of Esper Postma’s recent installation, “Mirror Stage,” created in residence at Gropius Bau with the Berlin Program for Artists. With his meticulous recreations of fragments of each building, Postma revives the controversy with this installation, writes Pablo Santacana López, arranging literal confrontations that produce a nostalgic specter of the past.

On clear days, the bronze-mirrored façade of the Palast der Republik reflected Berlin’s skyline from the Fernsehturm all the way up to the towers of the Gendarmenmarkt. The Palast, which housed the parliament of the German Democratic Republic, was intended not only as a symbol, but also as a literal reflection of its context. Erected between 1973 and 1976 to replace the Hohenzollern residence – also known as the Berliner Schloss – the façade of the Palast mirrored a part of its own predecessor. The original balcony of the Berliner Schloss, from which Karl Liebknecht famously proclaimed the formation of a “free socialist republic” in 1918, was saved from destruction and, in 1963, incorporated into the façade of the new headquarters of the East German State Council, which was located right across from the Palast der Republik. The Berliner Schloss – the original – thus always maintained its presence.

In 2006, the Palast der Republik was demolished to make way for a modern replica of the Berliner Schloss, now called the Humboldt Forum. The 170-meter-long glass façade of the Palast was replaced by a concrete structure covered with newly sculpted baroque ornaments. The mirror was thus made opaque and heavy. Only small pieces of the original Schloss survived the damage of WWII and the structure’s subsequent demolition; from among more than 50 eagles decorating the upper cornice of the building, only one survived.

On view on the Gropius Bau website is a new installation by Esper Postma developed during a residency at Gropius Studios with the Berlin Program for Artists (BPA). The work revives the controversy around the Berliner Schloss and the Palast der Republik and is a return to the mirror stage. A 216 x 211 cm segment of the façade of the Palast der Republik is meticulously reproduced with the same materials as used in the original building, then juxtaposed with another reproduction: a 235 x 100 cm eagle cast in plaster from the single surviving original from the imperial Schloss. The eagle appears to look at its own mirror image reflected in the fragment of the Palast’s façade. The title of the installation, Mirror Stage, is a term borrowed from psychoanalysis that describes the phase in which we construct our Ego by identifying ourselves with our reflection in a mirror. According to Jacques Lacan, mirrors confront us with our present state, allowing us to watch ourselves externally (from another place) but synchronized (at the same moment). 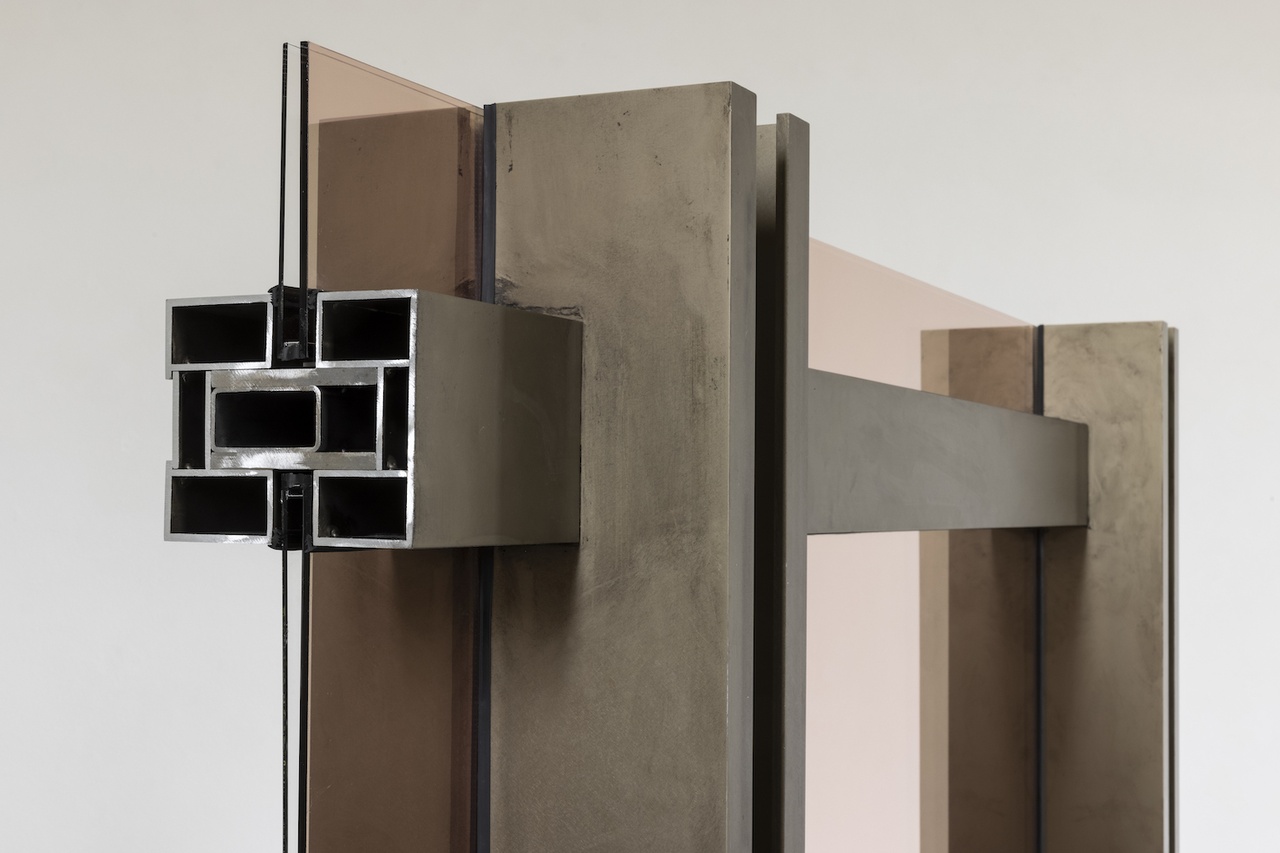 The installation confronts two different aesthetics and technologies of propaganda. The heavy stonework of the Berliner Schloss was a theatrical manifestation of classical order and imperial power. It was built with heavy, opaque materials using handcraft. The Palast der Republik, on the other hand, was built from prefabricated industrial elements, according to a modern agenda: standardization, efficiency, lightness. Postma reconstructed both fragments preserving these two principles. Postma molded the eagle, a canonical symbol of institutional power and Prussian imperialism, from a cast made by one of the stonemasons who worked on the reconstruction of the Berliner Schloss. The fragment of the façade of the Palast der Republik was replicated by Postma in accordance with construction drawings of the Palast found in the Bundesarchiv.

While the sanitized aesthetic of the glass and steel façade is rendered abstract when reduced to a fragment, the significance of the eagle as a nationalist symbol persists when placed in the gallery space. Postma’s installation calls to mind Marcel Broodthaers’s Musée d’Art Moderne, Département des Aigles from 1968. Over a period of four years, Broodthaers maintained a fictitious museum displaying a collection of hundreds of eagle reproductions, from corkscrew handles to medieval shirts, all brought to the gallery space to underscore their importance. By thematizing the endless reiteration of the eagle motif, Broodthaers criticized the nationalism of art institutions 50 years before the Humboldt Forum was erected.

Postma’s work appeals to processes of replication and model-building to investigate the way in which the built environment holds agency over the communities inhabiting it. By means of life-size reconstructions, Postma performs an autopsy of the real and literally allows for alternative points of view. His 2011 installation Expressions of Guilt in Animal Behaviour consists of a life-size dissection of a fictional museum of natural history, placing the viewer in between two floors of the building, an otherwise unreachable perspective. By cutting through the construction, Postma allows the viewer to perceive the hidden layers of the museum building. The installation fosters new comparative relations by expanding the audience’s view, from the exhibition gallery to the basement storage room from the labels in the vitrines to the cracks in the façade.

Challenging the perspective in which we see things, Mirror Stage brings that same strategy to the context of the contested reconstruction of the Berliner Schloss, revealing the mirage of looping, mirroring references in architecture reconstructions: The castle is torn down, preserving some traces on a contiguous building. A new palace replaces the old castle. The new palace is torn down; the old castle is reconstructed. The old palace is embedded in the new (old) castle through preserved furniture included in the permanent exhibition and a wall painting by artist Tim Trantenroth. 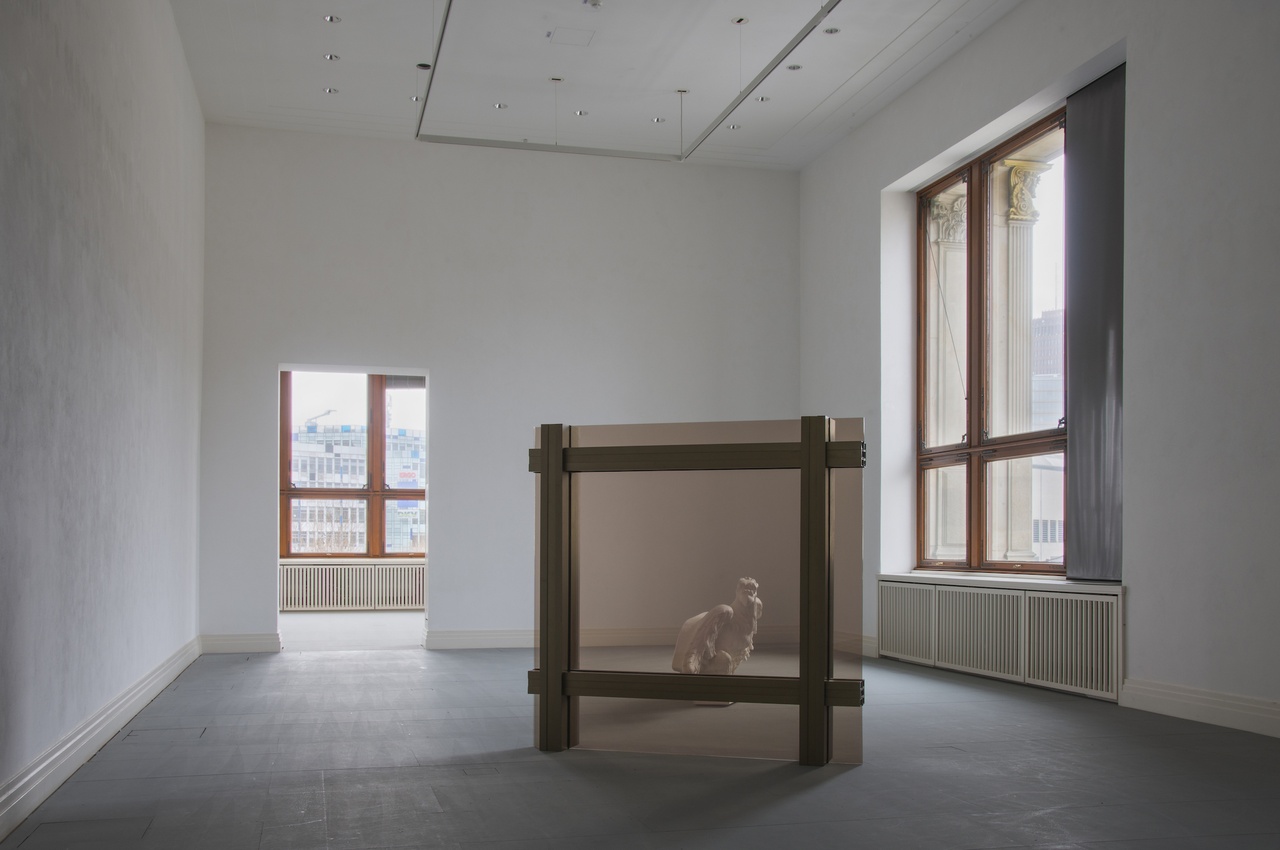 While many people criticize the erasure of history effected by replacing current environments with fictitious copies of the past, the Humboldt Forum invites and stimulates debate [1] as a way to absorb and control its criticism. In an interview with Artnet last December, Humboldt Forum Director Hartmut Dorgerloh insisted: “It is such a prominent place. There are a lot of controversies around it. I think it is good, and we want to continue with this.” [2] Is the controversy about the reconstruction of the palace used to justify its existence and reinforce its prominence?

The eagle enjoys its reflection in the window. Echo produces noise and facilitates misinterpretation. Stiftung Preußischer Kulturbesitz (SPK), the institution behind the Humboldt Forum and holder of the ethnographic collections exhibited there, has been widely criticized for its lack of interest in provenience research and problematic handling of objects of colonial origin. Like a mirror, the institution has tried to reverse perspective. Strongly biased statements decorate the sections of its website relating to provenience research: “for the participating indigenous partners, the circumstances surrounding the change in ownership of the objects is currently less of a focus.” [3] The number of initiatives demanding action in regard to restitution requests addressed to the museum keeps growing: the website Barazani Berlin, the platform No Humboldt 21, and the initiative Decolonize M21 were recently joined by the Coalition of Cultural Workers Against the Humboldt Forum. The Humboldt Forum plays a mirror game on them by then fostering further controversies: restitution requests were soon outshone by discussions of the appropriateness of reconstructing a golden cross on the top of the building – the icing on the cake.

In Mirror Stage, the reflection of the eagle is as simulated as its plaster materiality. Both the glass façade and the eagle ornament are replicas of a mystified glint. Their physicality, reproduced by Postma, is a nostalgic specter of the past. As stated by the artist, Mirror Stage arranges a meeting of two objects from different time periods in which histories and geographies merge, “rehabilitating familiar symbols and investing them with myth.” [4] The concurrence of these two objects represents a temporal knot as defined by art historian Georges Didi-Huberman: “what persists or ‘survives’ from earlier periods, in the form of a symptom in the current era.” [5] For Didi-Huberman, “to gain access to these stratified temporalities requires a shock, a tearing of the veil, an irruption or appearance of time.” [6]

Postma’s installation is an irruption that brings us back to the mirror stage, allowing us to position ourselves between the eagle and its mesmerizing bronze reflection. The Humboldt Forum’s neo-baroque now appears more like the flashy lights of a Las Vegas casino than the façade of a contemporary civic center. Ornamental decoration has shifted the focus away from the discussions we are supposed to have. The mirroring façade of the Palast has been replaced by a mirage.

Pablo Santacana López is an art researcher and architectural designer based between Madrid and Berlin. He is a co-founder of the Spanish art collective Vendedores de Humo and a member of the Berlin-based platform decolonizeM21.