Mimesis has a rich tradition in the history of art, but the degree to which it is an effective or productive artistic strategy varies greatly. At first glance, Evelyn Taocheng Wang’s visual citations of Agnes Martin could be mistaken as pure and benign mimetic desire. Upon closer inspection, however, the artist’s quotations are far more complicated and critical, even perverse. Artist and writer Scott Roben reports here on Wang’s current exhibition in Düsseldorf and examines the economy of Wang’s work, which exists both amidst and beyond its web of discernible references, languages, genders, and nationalities.

A virtual artist talk by Evelyn Taocheng Wang began with two photographs of her childhood home in Chengdu, China, in 1997. In one, a painted profile of the Norwegian composer Edvard Grieg that Wang had copied from a CD cover hung above a set of bookshelves. In the other, Wang revealed that what appeared to be a classical Chinese lattice window was, in fact, a trompe-l’oeil rendering she had painted herself. If these two early copies ambiguously express both aspiration toward and a subversion of the symbols of upper-class belonging (a “set-up,” she told the audience), they are in keeping with Wang’s work more broadly, in which quotation is always a deeply equivocal and relational exercise – part of how one shapes a self and performs it. A few slides later, showing a sheet of calligraphy rows hanging in her college dormitory, she lamented her lack of skill in the medium while asserting, “I like to practice calligraphy because it reflects the energy and power of my body.” [1]

With vulnerability, humor and elegance, Wang – who is Chinese-born, German-educated, and Netherlands-based – enacts a vision of identity as an evolving and relative construct interwoven with both place and time. Her own handwriting plays a recurring role in the works that make up “Reflection Paper,” as do quotations, imitations, parodies, and allusions. The latter are entwined with personal anecdotes, translated, or staged in space, in film, or on the page. If they are “set-ups,” perhaps they are also “settings,” like lyrics set to music.

In the press release, Wang describes the exhibition as a “clinic,” which raises the question: Can quotation also be a form of bodywork? One answer might be found in Wang’s framing of her work’s references to the work of other women (including Ingeborg Bachmann, Eileen Chang, Agnes Martin, and Virginia Woolf) as “an attempt to be a literal woman and sew my own womb.” [2] Clinic Agnes Martin (2020), one of the exhibition’s central works, is a series of Agnes Martin paintings copied from illustrated catalogues. Wang’s renditions are carefully crafted with graphite line work and layered oil washes in pastel pinks, yellows, and blues; surrounding fields of untouched gesso suggest the margins of printed pages. They hang on the wall, or rest against the mutable components of the Thoughtless Garden (2020), an arrangement of freestanding gates with circular cutouts evoking East Asian garden architecture in the center of the room. A white carpet stretching between them offers space for visitors to sit and reflect.

Copying Martin from reproduction is itself a slightly perverse and, in Wang’s hands, definitely pointed gesture. Particularly when it comes to big, modernist painting that’s been labored over by a hand like Martin’s, we’re taught to privilege “in the flesh” experience and to assume that the work’s essence is diluted or even obscured by photography. But relationships to the work through reproduction are just as real; at least, they certainly have real effects. And anyway, when it comes to the “real” – as Wang reminds us at a few points throughout the show – we might consider Martin’s famous axiom that beauty “is not in the eye it is in the mind.” [3]

Martin’s pronouncement, though, is its own kind of quotation and one of the hinges upon which Wang’s constellation of meanings shifts. In Multiple-Hearted (2020), a drawing on fabric that hangs across the room, Martin’s words appear side-by-side with the Chinese character for “suspicion.” An annotation in the upper-right corner questions the nature of Martin’s devotion to the “Zen theory” that was popular among mid-century modernists in the US and suggests that her views on beauty were informed by the teachings of the Sixth Patriarch Huineng, a figure associated with the early history of Chinese Chan Buddhism.

Wang is trenchant in her diagnosis of the layers of cultural interpretation, misinterpretation, and projection that arise between East and West. However, viewers waiting for these layers to sharpen into a fixed point will be disappointed: Wang is not so easy. In her work, meaning is never fixed, always relative. Roles can be traded or reinvented; the patient can become the clinician and vice versa. Freund bin ich heute den Ahornzweigen, / morgen vergehe ich mich an dem Stamm… (“Today I befriend the maple branch, / tomorrow I will attack the tree…” [4]) reads a quoted verse by Bachmann on a nearby scroll. In case the contradictions become difficult to navigate, a series of navy uniforms Wang created for the Kunstverein’s staff distill advice in the form of a mantra: “Do not agree with Agnes Martin all the time.”

Clinic Sis (2020), a concept sketch that greets visitors as they enter, depicts Wang seated and veiled amidst the show’s elements as well as the benevolent, uniformed staff of the Kunstverein. Additional preparatory drawings, displaying installation instructions, give a sense of the exhibition itself as an evolving sketch or a model. More practically, they also provide a sort of map for navigating the vast amount of work the show contains. Four long scroll paintings shown in vitrines are illuminated by regularly placed table lamps and sometimes shaded by fabric awnings based on examples Wang encountered around immigrant housing in Rotterdam. They read right-to-left, their images accruing like lists that suggest oblique narratives: veiled women posing for selfies next to bicycles in the park, grazing animals, fields of abstract brushwork, blown apart genitalia, severed bellies exposing fetuses. The brushwork ranges from virtuosic to brutalist and carries into a number of large framed paintings on paper that encircle the main room. In front of a window in the entry hall, an installation of oversized granny panties that fit like dresses are draped over a thicket of drying racks.

Through a curtain behind the Thoughtless Garden’s meditative expanse, the exhibition reaches some of its highest emotional pitches in a series of four films (Reflection Paper 1–4, 2013) from which the exhibition takes its name. The first three make direct and indirect references to the work of the modernist Chinese American writer Eileen Chang (1920–1995). Wang collages fragments of Chang’s texts with imagery and props – makeup compacts, hands in surgical gloves snipping golden eggs with scissors, worms burrowing into fabric – that reflect her own memories and associations. In the last in the series, Reflection Paper No. 4 (2013), subtitles that reflect internal and external dialogue flash across the screen, too fast to take in. The words evoke, impressionistically, Wang’s anxieties around the process of obtaining a Dutch artist visa and the violence of the immigration department's bureaucratic maze. Underneath, shots of animals Wang filmed in the Amsterdam Zoo could be a balm for bubbling insecurities, or an ominous doubling of the visa office’s taxonomic logic. 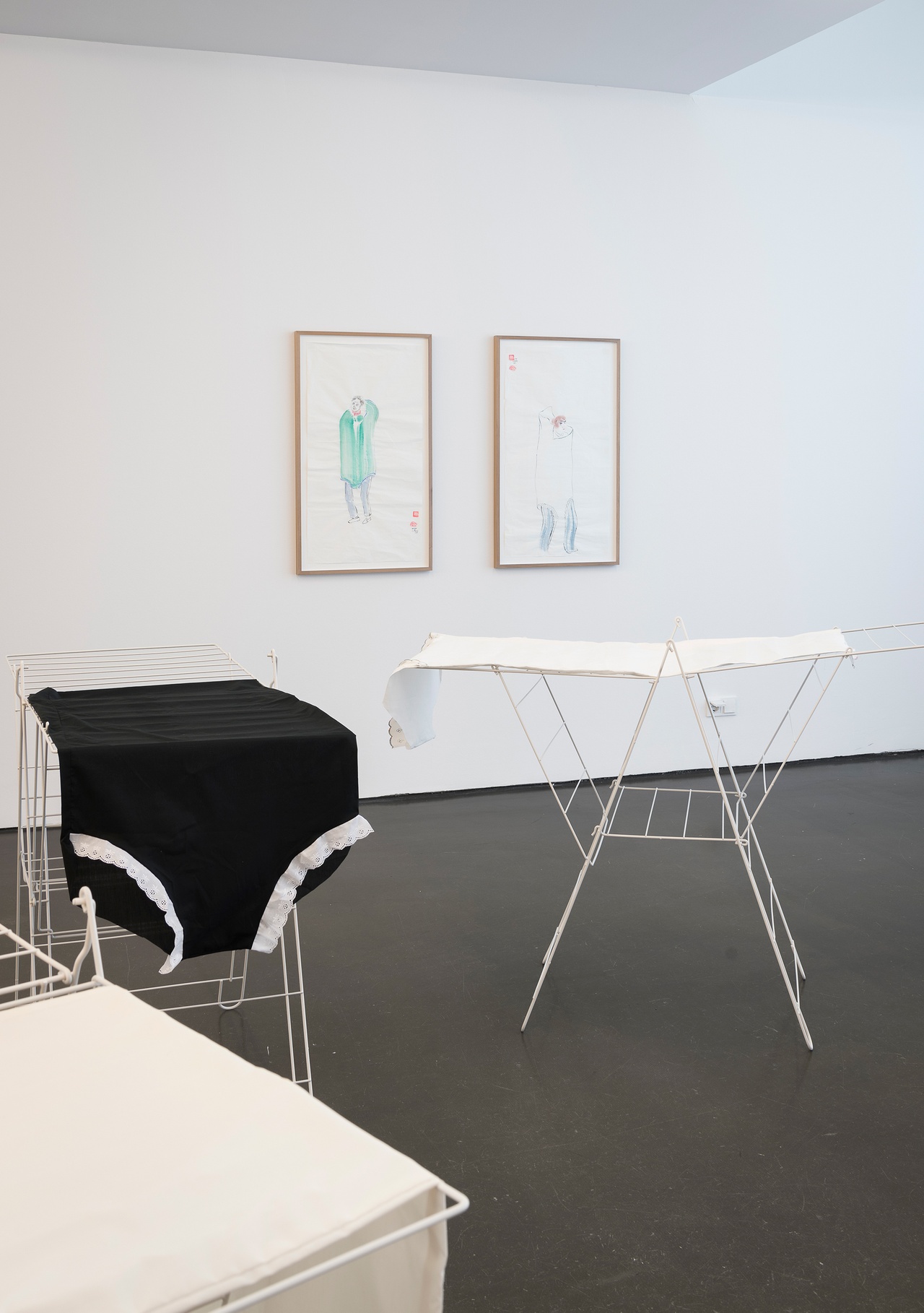 In her False Posters series, Wang evokes the iconic, graphic language of the poster in the service of highly equivocal visual scenarios. One example, The Land of Might-Have-Been (2020), is a large-format painting on rice paper that depicts a mustached Superman on a picnic in the grass, sipping tea with a mustached woman holding a parasol and ensconced in flowing robes patterned with national flags. Written over the sky beside them are the lyrics of a song from Robert Altman’s upstairs/downstairs mystery drama Gosford Park (2001). Weighted with exaggerated symbols of national and class identity and power, the scene’s subjects perform as ordinary, even bored, individuals beneath a gray sky.

Eileen Chang once waved off the word “tragedy” as a label for her writing, which she felt tied things up too neatly. Instead, she described her work as an art of “desolation,” whose effects penetrate more deeply by never resolving, “like the conjunction of scallion green with peach red, creating an equivocal contrast.” [5] You could see Wang’s work, too, as a succession of equivocal contrasts that play out against its placid backdrops: its gray skies, blank spaces, meditative gardens, and warm table lamps. You might find some relief, but never closure. Similarly, perhaps, one quality that Wang’s work shares with Martin’s grid paintings is that both draw you in, but the closer you approach, the more you find yourself pushed out – in Martin’s case, as a function of the grid, which suggests vastness but also a barrier; in Wang’s, by the allure of a subjective universe that becomes opaque when it is externalized. Opacity can be a source of power and possibility in its own right, and it is integral to the economy of Wang’s work, which exists both amidst and beyond its web of discernible references, languages, genders, and nationalities. At last it is Bachmann, whom Wang quotes in German and translates to Chinese, who voices the dilemma: Ein Wort nur fehlt! Wie soll ich mich nennen, / ohne in anderer Sprache zu sein. (“Words fail! How shall I name myself, without living in another tongue.” [6])

Scott Roben is an artist and writer in Berlin. His recent work responding to the site of Hannah Höch’s former garden in Berlin-Heiligensee will appear at the Museum Reinickendorf this fall.