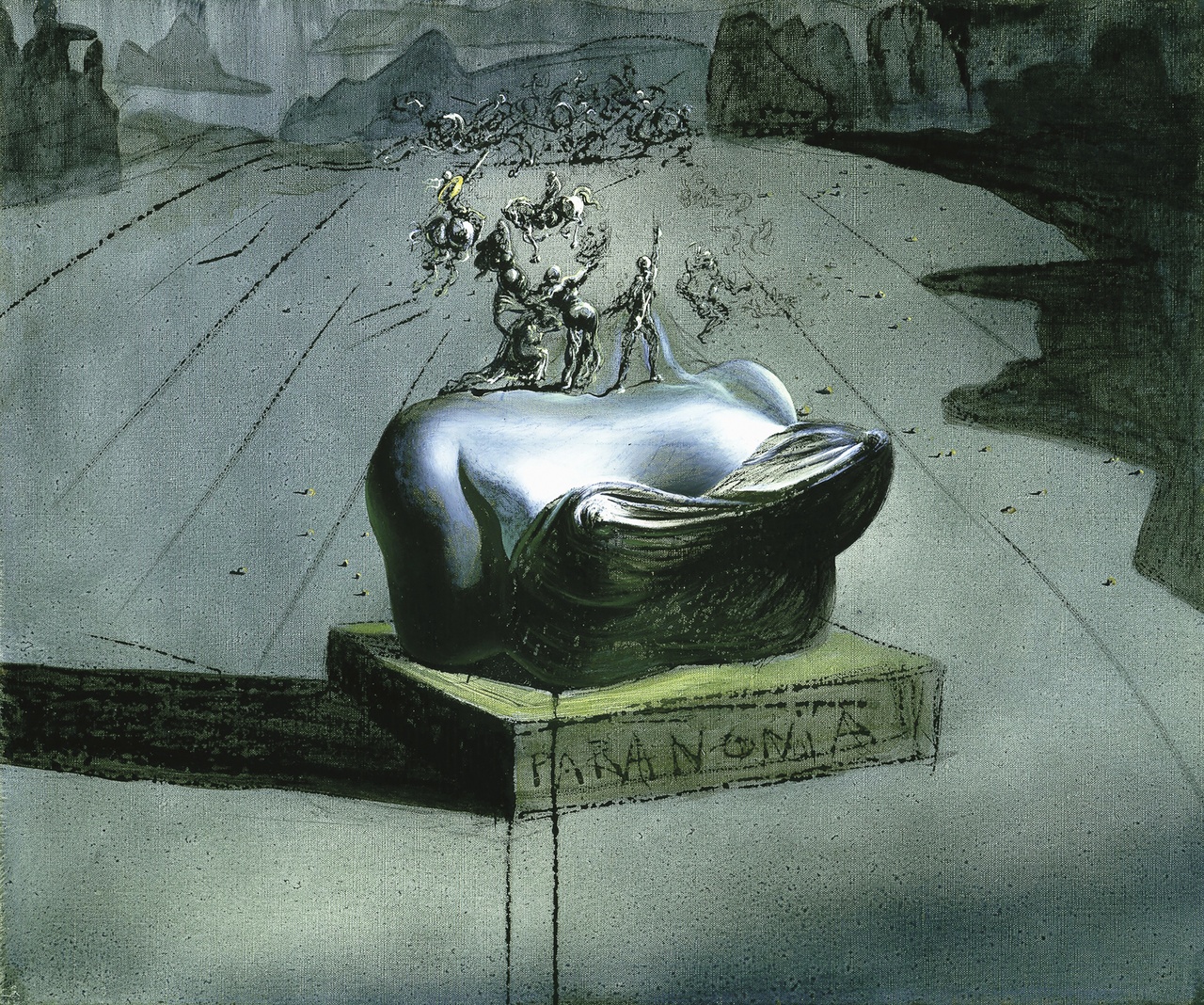 Freudian theory continues to be a productive, ever-present reference for artists and art historians alike. A recent exhibition at the Lower Belvedere presented the psychoanalyst’s work once again – this time in relation to Salvador Dalí. Jaime Brihuega Sierra curated the Surrealist’s art in chronological order, highlighting its borrowings and reworkings from Freud’s theories. In their close examination of the show, Lisa Moravec and Hong Zeiss address the art historical references accentuated by Margula Architects’ distinctive exhibition design. According to the authors, the show coincided with a surge of interest in Surrealist art and reconfirmed Freud’s central role in Austria’s cultural industry.

After years of failed attempts, Salvador Dalí finally came face-to-face with Sigmund Freud in July 1938. The renowned Austrian psychoanalyst had agreed to personally meet the artist in London. The two men spoke very little, as the exhibition catalogue tells us, citing a personal note from Dalí’s autobiography, but they obsessively ate each other with their eyes. [1] The mystified relationship between the two men was explored in detail earlier this year in the Lower Belvedere’s exhibition “Dalí – Freud: An Obsession.”

To enter the windowless space of the show, visitors had to walk through smoked-glass doors. Once inside, we were immersed in a red-and-pink room of tubular shape and found ourselves in front of a life-size photograph of a young Salvador Dalí, wearing a sea urchin on his head. The black-and-white picture was attached to a sideboard-like installation, whose structure was reminiscent of a dressing table. Produced throughout the early 20th century, such furniture is still referred to as Psyche in Austria. Where, traditionally, a mirror would throw back one’s own reflection, the image of the artist welcomed the viewer. To its right, and in reference to Dalí’s headdress, a taxidermied sea urchin was presented underneath a bell jar. Throughout five chronologically arranged sections, the Spanish curator Jaime Brihuega Sierra displayed Dalí’s pieces in relation to Freud’s psychoanalytical work in this furniture-like exhibition design by Margula Architects. As the label at the show’s entrance explicated, Margula Architects has paid homage to Friedrich Kiesler’s wall-less exhibition design for “Art of This Century” (1942), featuring then-new Surrealist art at Peggy Guggenheim’s New York museum. 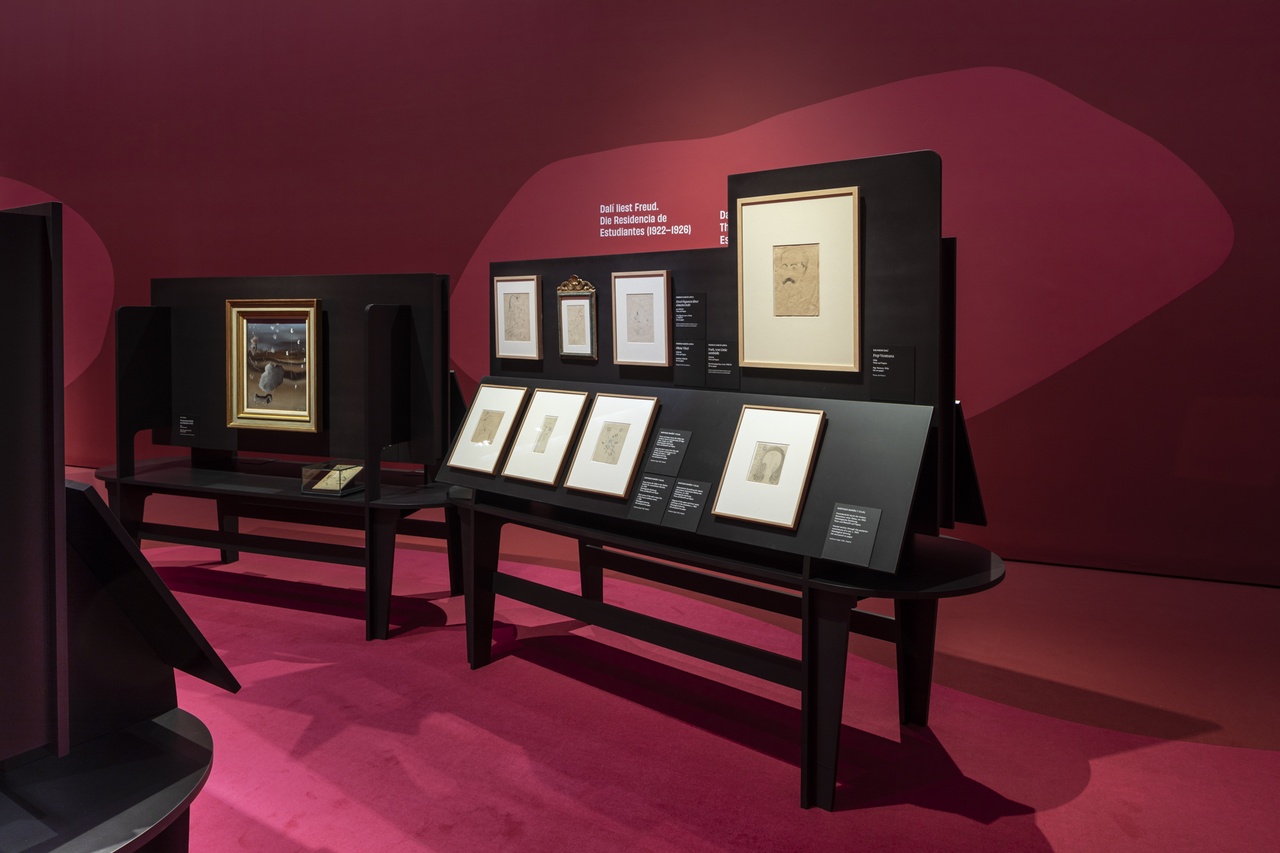 The exhibition starts with Dalí’s early family life, followed by his student days at the Residencia de Estudiantes in Madrid during the 1920s, where he met and started to collaborate with Federico García Lorca, Luis Buñuel, and José Bello. Works such as Buñuel’s and Dalí’s renowned short film Un chien andalou (1929) and Buñuel’s film Menjant garotes (Eating Sea Urchins, 1930) were also exhibited. The second section focused on Dalí’s Cubist paintings and on Santiago Ramón y Cajal’s ink-and-pencil drawings of axons of olfactory cells in the sphenoid bone (1904) and cells of white matter in the brain (1913), which copy the illustrations of Freud’s early scientific publications. In section three, Dalí’s complex relation to André Breton and the Surrealist movement in the late 1920s and early 1930s was addressed. It comprised his large- and small-format paintings that resulted from his collaboration with the Surrealist journal Minotaure, a driving force behind the art movement. Section four was devoted to the development of his paranoiac critical method in the 1930s, which Dalí conceived as an interpretation of irrational knowledge, alluding to Freud’s psychoanalytical method. The exhibition also included some of his seminal paintings such as Swans Reflecting Elephants (1937). At the end of the show, we walked past Dalí’s renowned Lobster Telephone (1938), which the artist made for Edward James, one of the leading collectors of Surrealist art.

With Freud’s death the following year, Dalí’s obsession with his psychoanalytical method started to transform. The artist’s late portrait of Freud’s figurative head (1938), included in the exhibition, and Freud’s consistent disinterest in Dalí is also revealing in terms of the connection between one of Austria’s leading public art museums, its national cultural heritage, and the Spanish artist-icon Salvador Dalí because the “Dalí – Freud” exhibition is, from an art historical perspective, a public staging of Freud’s cultural relevance put in relation with Dalí’s work. It is also not the Belvedere’s first attempt to explore art’s relation to Freud’s work. In 2014, on the occasion of the 75th anniversary of Freud’s death, the museum’s contemporary branch, Belvedere 21, invited the conceptual artist Joseph Kosuth to curate a group show. For “Sigmund Freud and the Play on the Burden of Representation,” Kosuth drew on his previous exhibition model, developed 25 years earlier for his exhibition “Hidden Thoughts of a Visual Nature” at the Freud Museum, located at Freud’s Viennese home at Berggasse 19. There, the walls were coated with black wallpaper featuring text fragments to link the selected visual artworks to Freud’s psychoanalytical theory. Similar to Kosuth’s curatorial approach, the Belvedere’s show again capitalized on Austria’s modern heritage.

The “Dalí – Freud” exhibition explicitly prompts questions about the cultural relevance of Freud’s modern psychoanalytical method. The Belvedere is, however, not the only museum to put Surrealist art back into the spotlight. The show coincided with the global trend to extract from, expand on, and reinterpret the work of Western Surrealist artists in relation to their non-Western contemporaries, with the decolonial aim to connect Surrealism’s “center” with its “periphery.” For example, the ambitious, long-term research project of the Met and the Tate resulted in the exhibition “Surrealism beyond Borders.” In 2021, it was first shown in New York before travelling to London in 2022. That show assembled, amongst others, the work of artists from Aleppo, Belgrade, Brazil, Cairo, the Caribbean, Mexico, Tokyo, and Turkey. While it had a clear art historical aim, the “Dalí – Freud” show focused on foregrounding the importance of Freud’s psychoanalytical theory for the cultural realm. 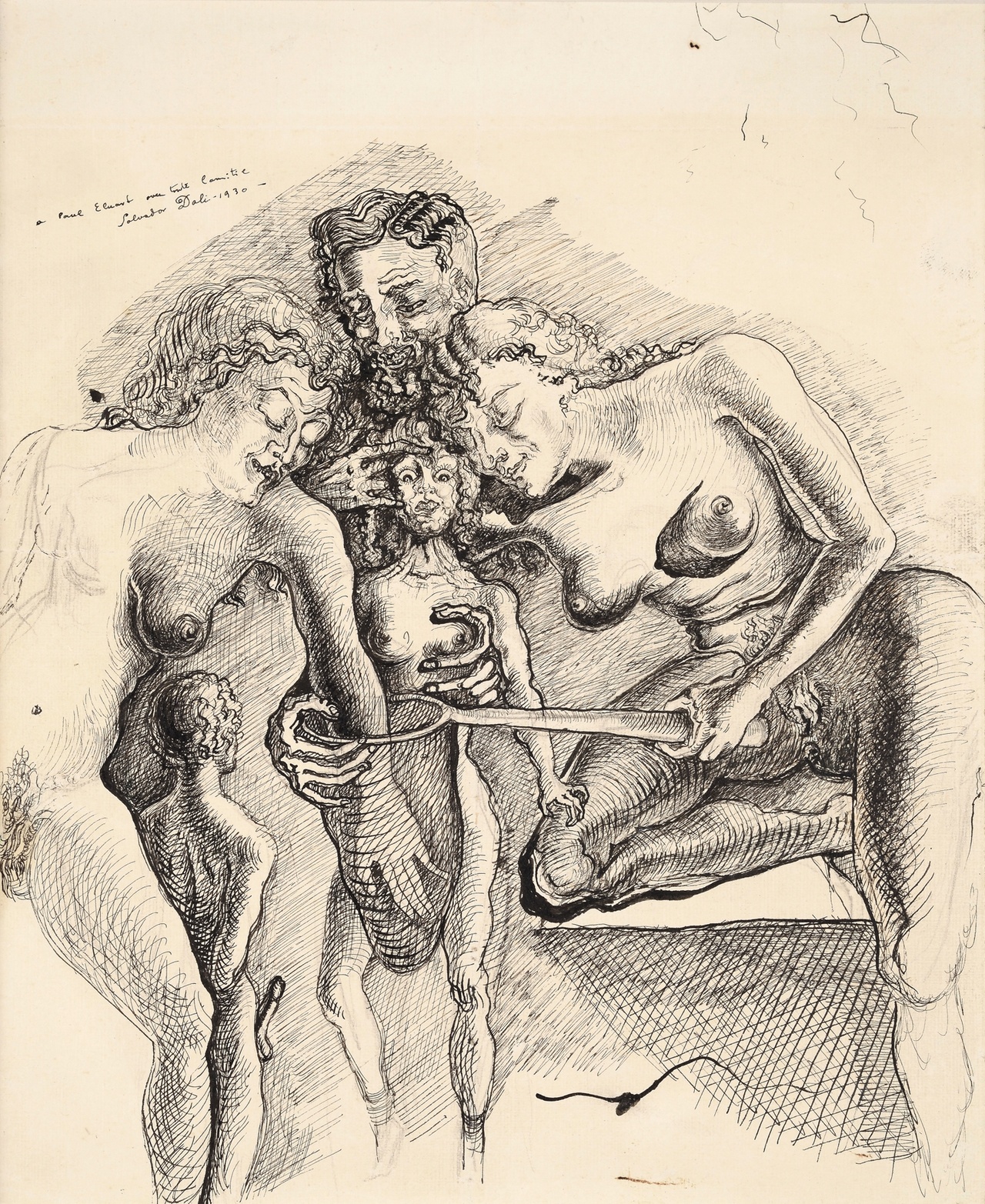 As the show was staged amidst the pandemic, it is important to note that Freud developed his psychoanalytical method alongside his cultural critique which addresses the connection between the private and the public spheres. According to Freud, culture is libidinal sublimation. In Civilization and Its Discontents (1930), he argues that the production of culture feeds on the energy of the sexual drive (the libido, to use Freud’s terminology), which is applied in a disciplined, non-sexual form. The “Dalí – Freud” exhibition was at once familiar as well as uncanny (unheimlich) because it was symptomatic of the reemergence and possibility to consume artworks in their material form once again. While the pandemic alienated us from cultural venues, the art world’s focus on the genre of Surrealism foregrounds the merging of traumata and artistic practice within institutional structures. If we were to take seriously Freud’s argument that cultural activities are rooted in the sublimation of the libido, this exhibition would provide us with the following claim: artistic work does not operate in parallel to psychoanalytical practice but it is a form of psychotherapy. The show’s biographical approach to Dalí effectively put Freud’s work and persona into a dialogue through the exhibition design. It brought Surrealism and its theoretical anchor closer together and fleshed out the tensions implicit within cultural production. Although the exhibition’s cross-reading of Freud’s and Dalí’s respective works were perhaps meant to provide an insight into the production of Dalí’s Surrealist art, it merely offered a circular interpretative framework: Freud’s psychoanalytic theory is referenced to back up Dalí’s work, and vice versa.

Although the investigation of the relation between body and mind lies at the core of both Dalí’s and Freud’s artistic and intellectual labor, the exhibition made no note of this. Freud’s psychoanalytical critique of culture stems from his empirical doctoral work. As a medical student, he studied the interconnected workings of the nerve cells and nerve fibrils of fish’s spinal cords before the workings of the human mind became his focus. Knowing this, it is not surprising that Freud’s studies also found entrance into the work of Dalí and his contemporaries: Freud studied the behaviors and fantasies of humans when developing his theory of bodily drives, and Dalí metaphorically depicted human-animal drives in his image world. It might have been fruitful to explore this connection in more detail to provide some new insights about the artist’s interest in appropriating Freud’s theories in his work. If the Surrealist movement developed through the merging of artistic practice and Freud’s psychoanalytic theory, as shows like the Belvedere’s have been telling us, then it might not be surprising that the established canon of Surrealist art remains deeply entangled with the international logistics of Austria’s cultural industry.

Lisa Moravec is a writer and art historian/performance scholar. She is currently a research fellow at steirischer herbst with a project on “Animal Art.”