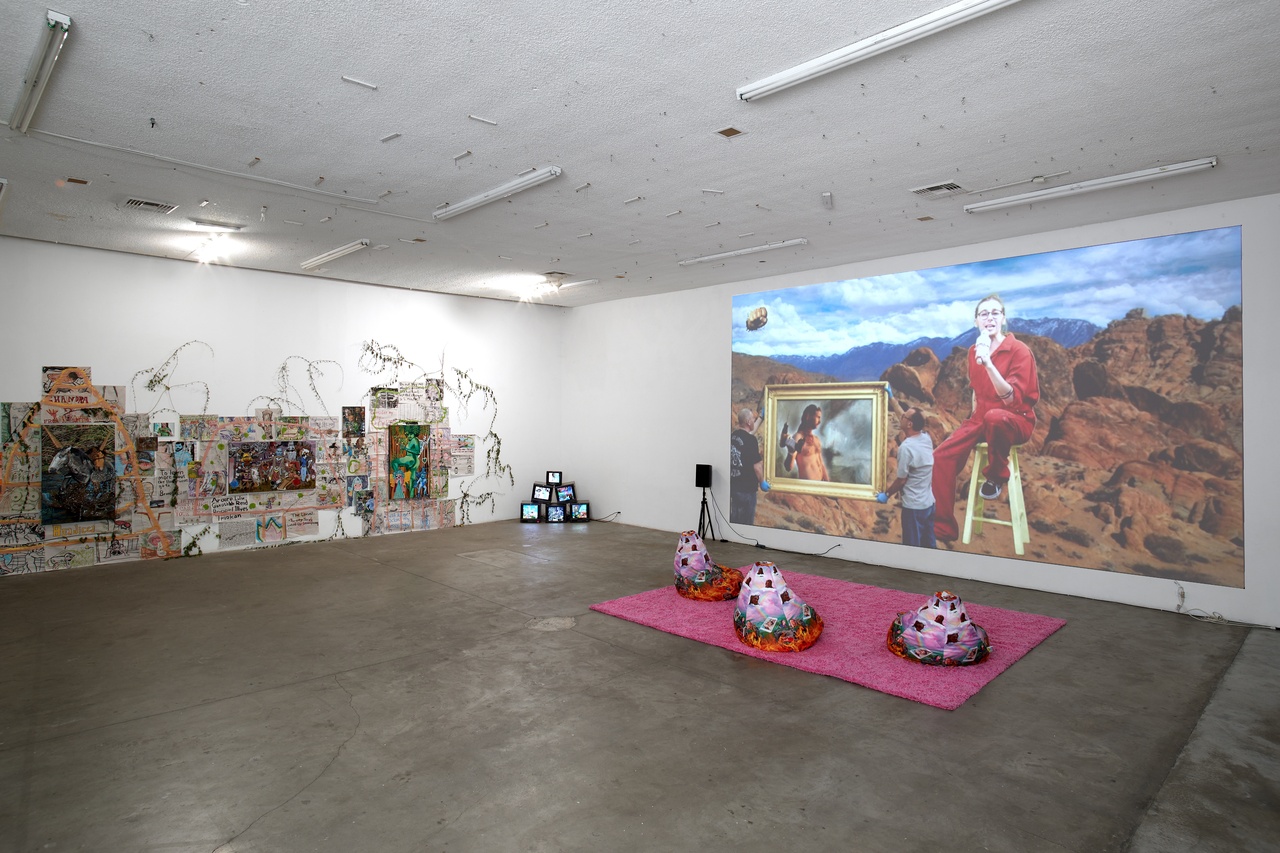 Both the inversion of gender norms and the drastically exaggerated performance of those norms have the potential for subversion, as a recent show at Human Resources in LA demonstrates. While Casey Kauffmann’s digital collages revolve around media representations of hyperbolic "femininity," John de Leon Martin’s installation investigates queerness through speculative scenarios and monstrous figurations from the realm of fantastic imaginations. Art historian Susanne Huber analyzes the juxtaposition of these two positions, which differ greatly in their materiality yet share the aesthetic of an abundant compilation of fragments.

Chances are you enter Human Resources’ exhibition space right at the moment when Johnny Cash’s inimitable chant saturates the room. However, this highly distinctive mixture of a tragically outworn macho sensibility and an angry yet romantic parade of the self-declared outcast does not prepare you for what you are about to be plunged into. The lyrics of Cash’s popular take on “A Boy Named Sue,” a song written by the humorist, children’s author, and poet Shel Silverstein, celebrate violence just as much as they demonstrate the privilege of ridicule.

Who can afford the laughter in a world that is rigidly ruled by gender and its concomitant hierarchical orders? A queer band of fairies, wizards, and the like, you will find, literally dangle their lavishly green balls in the face of normative conceptions of gender and sexual identities as excessively displayed in media entertainment. Casey Kauffmann and John de Leon Martin, in their double feature at LA’s Human Resources do, however, take our pleasure seriously. Smirks are being served cross-species, from a sheepishly smiling unicorn in love to the genital delights of a chicken breast, as a closer look at the artworks reveals. In individual yet equally expansive displays, the artists introduce us to seemingly very different visual domains. They aren’t so alien to each other, it turns out; it’s merely that Martin’s belongs to the world of fantasy, and Kauffmann’s might be referred to as cultural imaginary. Lots of imagination is at play in both.

The Johnny Cash “tribute” is only one detail within an abundant staging of images, visual fragments, and cultural codes and references, which Kauffmann and Martin invite visitors at the Chinatown-located art space to explore. The country-music superstar himself is not even granted much screen time during Kauffmann’s own performance of the song in the central piece of her part of the show, the 18-minute video Knowing Others and Wanting to be Known (2019–ongoing). Rendered as a blurry GIF with sloppy outlines, Cash floats aimlessly (pun welcome, not intended) through a virtual “Wild West” landscape tinted in the deep orange of a majestic sunset.

Opulence is where Kauffmann and Martin meet. Their work is presented in large-scale installations occupying opposite corners of the room, and visitors might feel pleasantly overwhelmed by the profusion of visual stimulation. We face thoroughly composed collages on both sides, which, despite very personal styles, share the durational aesthetics of collecting and thus, an archive. Vast tableaux are materialized on canvas, paper, paint, and passion fruit vines (Martin) as well as on screens and projections (Kauffmann). At the fringes of the artists’ respective realms, they mingle gently and weave into each other’s narratives. 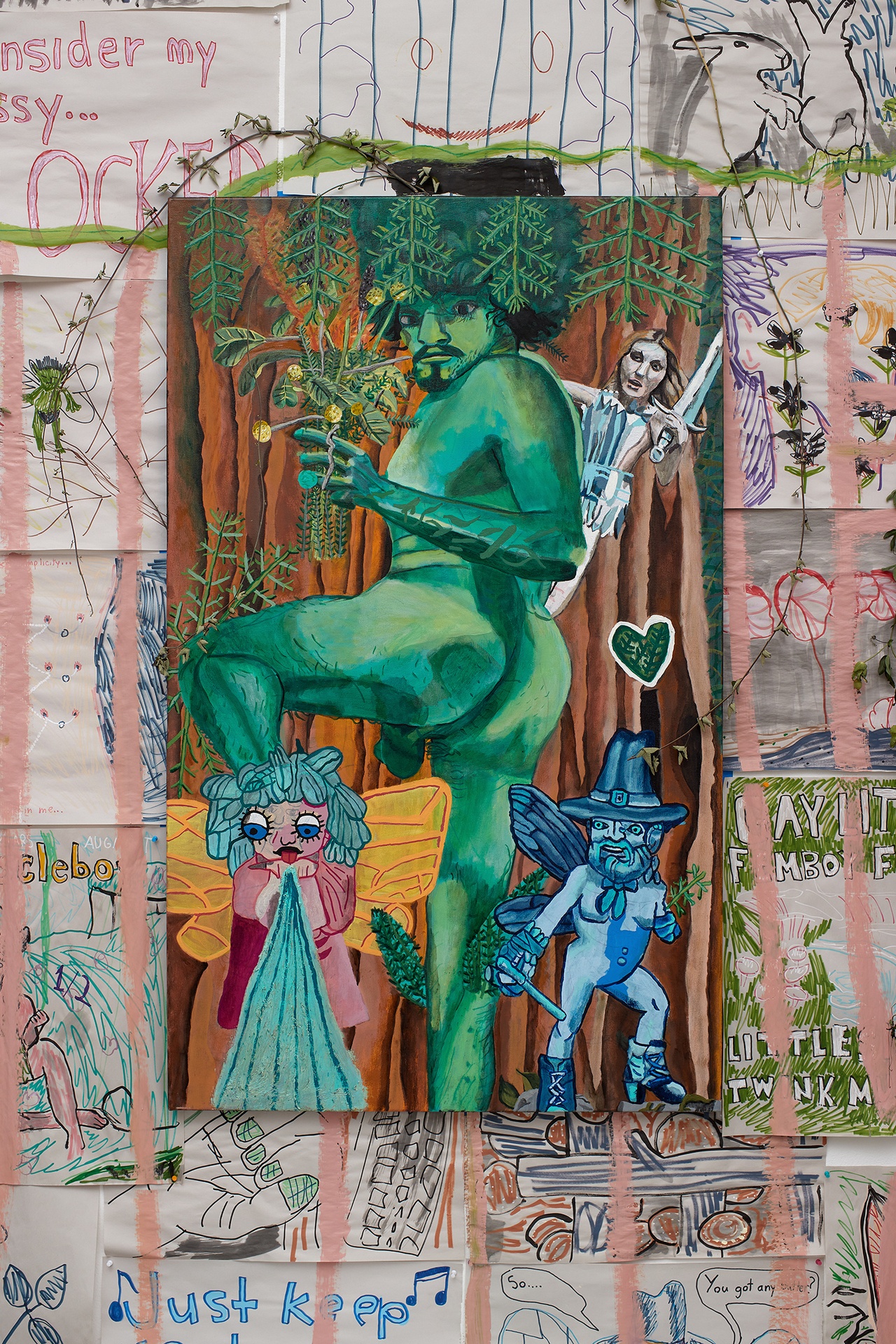 Even if popular media appear to provide a starting for both Kauffmann’s and Martin’s artistic endeavors, from their shared base of personal fascination-obsession with a very specific genre each artist pursues quite particular trajectories. While Kauffmann almost taxonomically mines from the abyss of reality TV and the internet for sites devoted to the embodiments of excessively exaggerated femininity, Martin, in his paintings and drawings, employs the fantasy world of the classic role-playing game Dungeons and Dragons (DND), to cultivate its queer potential from the sultry ponds of gay ephemera and sensibility.

The strong sense of materiality in Martin’s practice becomes obvious not only through the vines adorning the centerpiece of his installation, the Redwood Dryad. Situated in a California landscape by the idiosyncratic sequoia, the mythical creatures reside in our immediate neighborhood. The Redwood Dryad is rendered as a loose triptych; three differently sized oil paintings are surrounded by a plethora of drawings and paintings on paper. While the latter cheerfully traverse the fetish of the canvas as bearer of the truth, the paintings showcase a genuinely painterly attitude. The triad is emphasized by three cartoonish outlines of a mountain, a mushroom, and a tree, executed in broad, light-pinkish brushstrokes on top of the paper works.

At the center of the triptych we see a group portrait of Martin’s actual DND cluster, or rather, a portrait of what this group might look like. Since its invention in 1974, the game is still predominantly performed in the analog world, and despite cosplay and digital extensions, the adventure is essentially embedded in the imaginative capacity of its participants. Those avatars obviously do not succumb to either the fashion rules of a mainstream society or gravity. The previously mentioned testicles are part of the flower-adorned figure in the third painting, If You Were a Tree, What Kind of Tree Would You Be? (2022), which introduces us to the full-figure portrait of what would perfectly serve as a cheeky selfie on grindr: undermining racial fetishizing by a smoldering green skin only to show off a beautifully sculpted afro, the protagonist has swapped the smartphone for a bouquet of flowers and twigs. We cannot mistake desire for nature though, three fairy-like characters surrounding this figure remind us. We would miss out on a lot of fun. 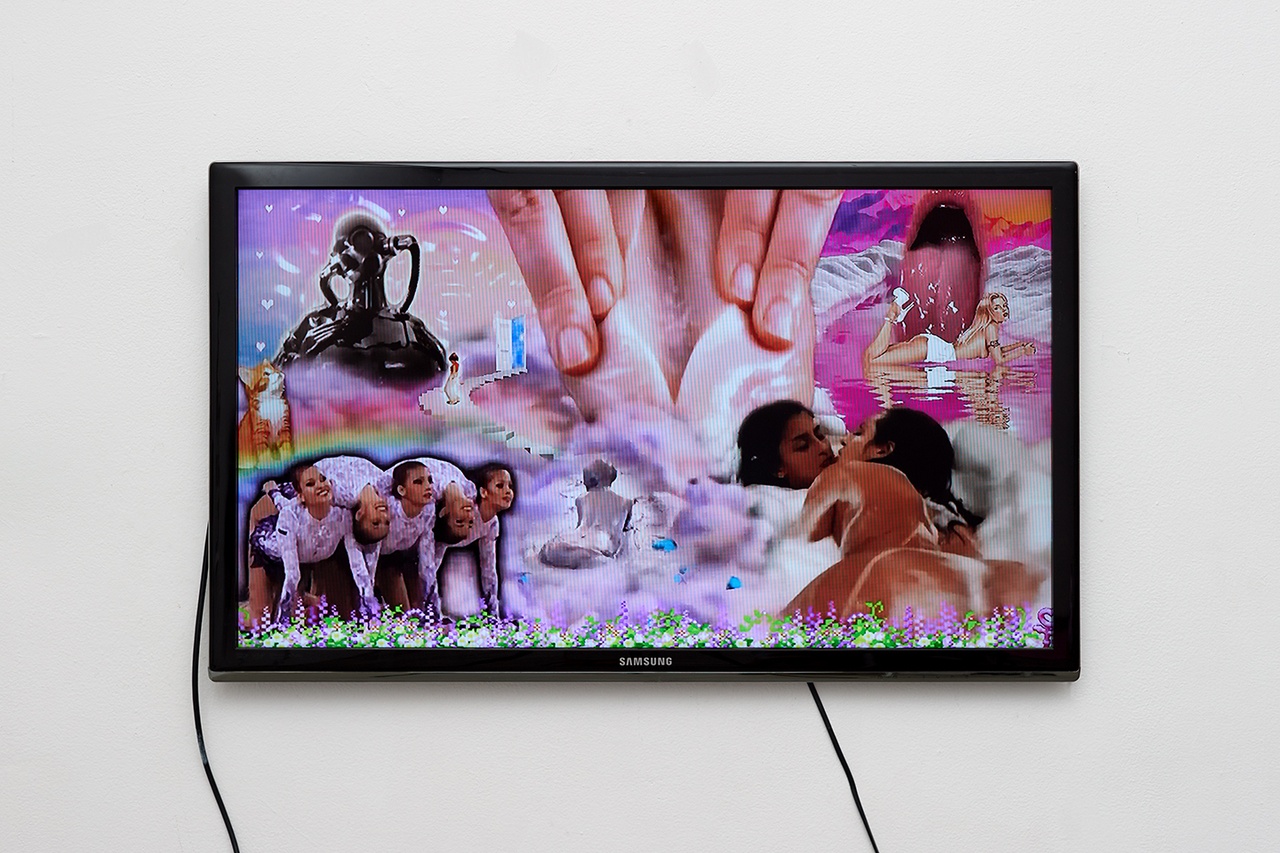 For Kauffmann, the smartphone is instead indispensable. In fact, it provides an essential tool to her practice. The various one-minute video clips as well as the ongoing long-format project Knowing Others… presented here depart from a habit of mobile media consumption on small screens. Kauffmann uses the same techniques to create virtual landscapes hovering between eye candy and the depths of desire, or what desire turns into when it is appropriated by the logics of hyper-consumption in late capitalism’s digital economy. It’s fast and flashy, fleshy too. The latter holds true predominantly for bodies read as female. They appear as GIF-like figures in various costumes or the absence thereof, all done up or au naturel, depending on their origin of either The Real Housewives or a “lesbian” mud-wrestling show, for instance. Kauffmann takes the term “moving image” literally. The clips, presented on tablets and TV monitors, collage together more or less animated fragments in front of more or less still backdrops. Water makes a strong appearance, in the shape of a puddle hosting a naked nymph carrying a giant dead fish, or an endless sea where the talking heads of the housewives disperse and express their sentiments on loop. There’s a lot of images going on in these images. Like viewing baroque paintings on acid, our gaze is locked onto the picture plane; we might find ourselves staring at the highly composed, rhythmically pulsating screens as if under hypnosis. Or is it voyeurism?

The more dynamic viewing experience of a reduced attention span is served in the ever-evolving video collection of Knowing Others…; organized like a social media feed, it invites us to binge-watch related and unrelated episodes. Some clips carry a viral history, some were rescued from being buried in the bottomless pit of the internet forever. Kauffmann crops, molds, and reframes the visual matter, thus creating no less than a personal history of media spectacle. We experience a strong sense of time, or rather, vanitas. Is there evanescence in gender? By cutting in the devout female figure from an early renaissance painting, or the supposed godmother of performance art, Marina Abramovic, mildly smiling, Kauffmann seems to suggest that art, for sure, has a say in this. The female cast of Love Island, however, performs pretty hard, too. And so does the artist: Kauffmann’s Cash-impersonation is the preliminary highlight where she inserts herself into the storybook. Flaming hearts and a hysterically gesturing Shia LaBeouf underline what the original song tries to conceal. The only thing ridiculous about gender is the importance people assign to it.

Kauffmann’s and Martin’s artistic strategies strongly resonate with each other. However, in the ways in which they negotiate the sexual charges at play in performances of gender as well as the gendered programs of sexuality, the show does not simply provide the flip sides of a single coin. We witness the cultural moebius strip of gender and sexuality enfolding within a mesh of highly specific social markers that accompany their iterations. That mesh is just as visual as it is deeply rooted in sonic experiences. The role of popular music tends to be frequently underestimated; but of course, it would be ridiculous to assume that we are not similarly affected by what we are sonically exposed to every day. Just as Cash still “speaks” through Kauffmann, Martin’s references to pop music icons like Madonna make us marvel: “In the midnight hour, I can feel your power” – something to process.

An Afterthought: Watching footage on YouTube of “A Boy Named Sue”’s 1969 recording live in front of San Quentin State Prison’s male-only audience might induce a subtle flinch of horror. The outward uniformity of the inmates clearly marks both institutional and cultural constraint. Conversely, it signifies an existential dimension of gender-nonconformity just as it reveals the hustle for an ideal of hegemonic masculinity that is never quite met, instead installing a hierarchy of genders within gender, awarding those with various kinds of power who play the virility game best. Kauffmann doesn’t make us fall down the rabbit hole of this song’s history, though. We are going to stay at the surface, right where the artist wants us to be, at least for now.

Susanne Huber works as a researcher of Art Studies/Art History with a focus on feminist, queer, as well as postcolonial theories and topics. She obtained her PhD at Freie Universität Berlin with a study on Lutz Bacher, Sarah Charlesworth, and Barbara Bloom. Her recent book Vom Konsum des Begehrens. Appropriation Art, Sex Wars und ein postmoderner Bilderstreit was published by De Gruyter in 2022.