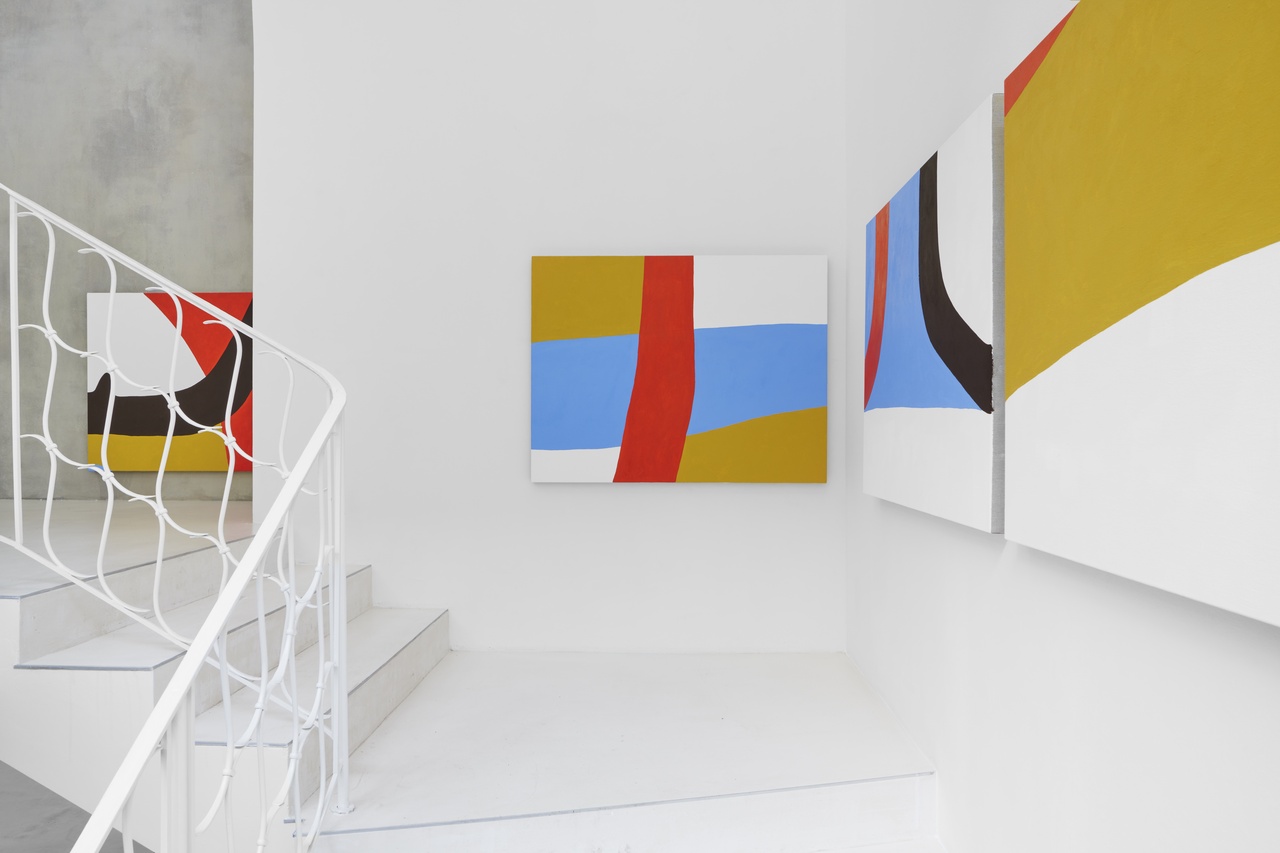 The gallery space is never just an empty void that functions merely to display works of art independent of its visitors. At Merlin Carpenter’s recent exhibition in Cologne, visitors are initially denied viewing the paintings at eye level and thus grow increasingly aware of their corporeal relationality. The painter Valentina Liernur walks us through the latest of Carpenter’s so-called Room Based exhibitions and reflects on how the show’s eventful vernissage relates to the mode of signification in his work. In her own practice, Liernur explores the physical qualities of materials in her paintings, be it oil on canvas or on less conventional surfaces like denim. Much like Carpenter’s, her work relies on the potentials of seriality.

Right as the opening night of Merlin Carpenter’s recent show, “Room Based – The Paintings,” was coming to an end – with friends and colleagues gathering in the basement at JUBG in Cologne – an unexpected incident happened. Someone must have burst into the gallery, grabbed a painting from the show, and run away – without even being noticed. Actually, we first realized that something had happened when one of us went upstairs to smoke, which must have been around ten minutes after the art theft. Among us attendees of the vernissage, a cold sense of disbelief cut through the air in the room. It all felt like a pure, aggressive shock as one of the (some might say mythic) hot spots of Cologne’s art world reproduced the clownish and violent reality that haunts us every day. Standing in the darkness – it must have been around midnight – outside of the gallery, some of us were trying to figure out what had just happened; the distortion of human contingency slashed the script of the night in an increasingly unpredictable social context. Some were even trying to find the painting on the dark streets of Cologne. Later, the police came, the vernissage ended, and the exhibition closed. The next morning, Merlin Carpenter decided to paint a copy of the stolen painting, Download 13 (2022).

“Room Based – The Paintings” gets its title from an “art movement” invented by Tomas Rydin and Merlin Carpenter called “Room Based.” There is a collaborative text for a previous show titled “Room Based,” which declared the magnetic capacity of such art: “The work that is not the work. Responsibility is not in the room but not a drift towards lazy emptying, it is a pre-. It is a general strike, it’s self-respect. Going from room to room or try to reproduce original conversation at The Pride of Spitalfields – as fictional last room. […] But Room Based sucks in all other reality anyway. Room Based is (just naming what’s already there?).” [1] In a way, perhaps, the circumstances of Carpenter’s show in Cologne actualized this characterization: the work that is not the work, trying to reproduce an original – but what is original anyway? And I kept wondering: What kind of landscape does such an elastic art practice like Merlin Carpenter’s evoke in front of us; what other reality? Does his practice affect the way we, as humans, process the speed of events, like the one I described above? 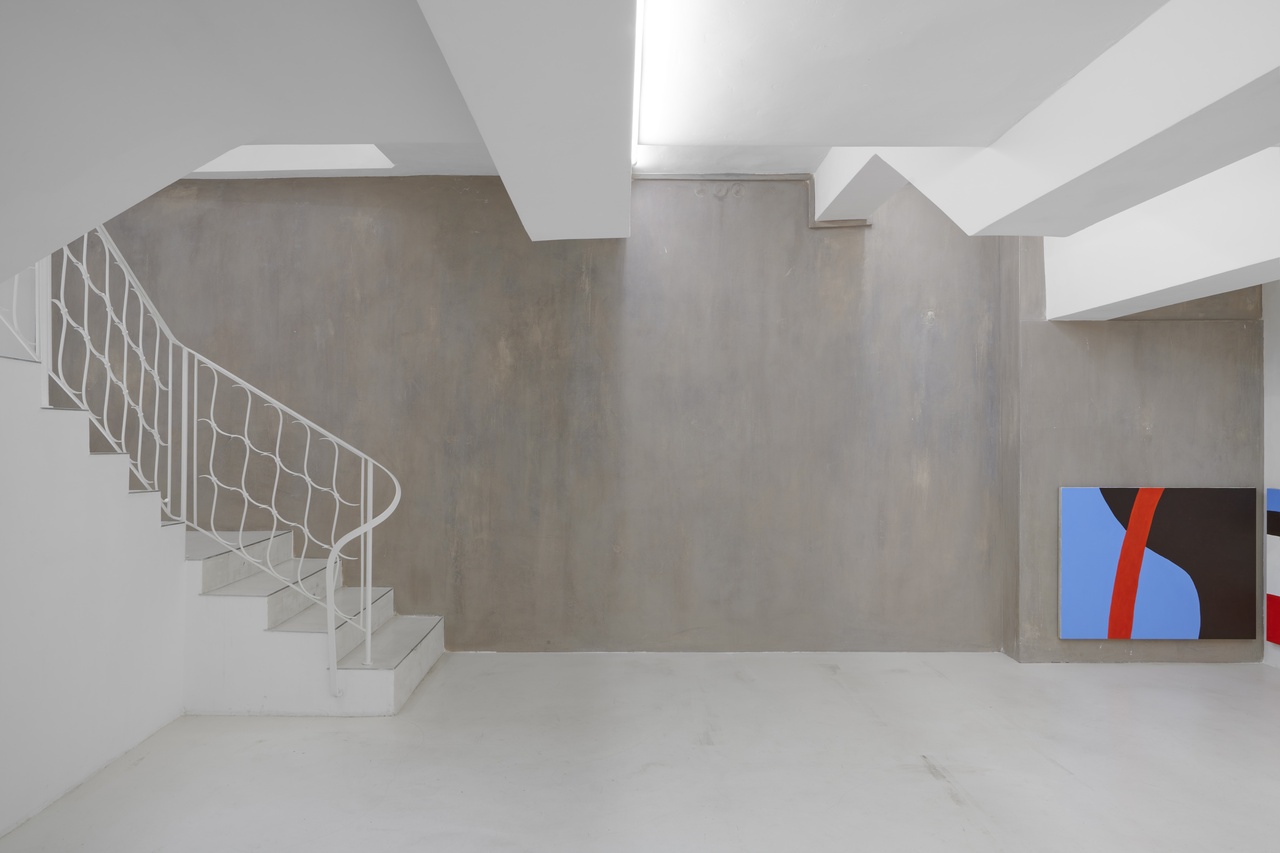 The first thing I saw when entering the show on the night of the opening was an abstract acrylic-on-linen painting that measured 85 × 110 cm and was hanging very low, almost touching the floor, on what seemed to be a gray concrete wall. It was the first painting of a series, which continued on the adjacent white walls next to a staircase leading to the basement. It was around then, upon reading the short press text, that I realized the gray walls were, in fact, Room Based paintings. Upon closer examination, the “walls” disintegrated into abstract painterly gestures, a dynamic pattern of handmade patina with little scratches that revealed a white surface underneath. To me, they became a sort of mural with the existential allure of big color-field paintings, albeit less colorful, depicting a bare concrete wall and possibly referencing brutalism. This modernist architectural movement sought to reveal and highlight the “truth” and “value” of the underlying, real construction materials. An aesthetic “ideal,” which in contemporary reiterations is often reduced to an absurdity, when luxury clothing stores, coffee shops, homes, or art galleries mimic concrete walls as part of an interior design strategy.

Once I began descending the stairs to the basement, I found myself facing a series of smaller paintings on linen, presented at eye level. These also reminded me of color field paintings – with flat colors applied to a velvety white ground. Each of them shows a visible handmade sketch in pencil, dividing the surface in several blocks. At first sight, the specificity of the background appears to be showing the flatness and contrast of colors, but when looked at closer, it reveals a more textural material sensibility. Attentive brushstrokes of paint are absorbed differently by each grain of the fabric, suggesting an intimate and intuitive approach. As the press text informed me, the paintings feature late 1990s Tom Ford¬–era graphics that themselves reference the 1970s. And they have a sexy allure, a detailed cut and fit, readily associated with iconic Tom Ford designs from the 1970s and 1990s. Each of them looks like a close-up of a bigger image, an amplified suggestive abstraction. But what I find more compelling is the infinite play of references referencing references. A dynamic – oscillating between reference, repetition, and original – that is carried to its extremes by the additional referential painting that Carpenter produced after the heist. 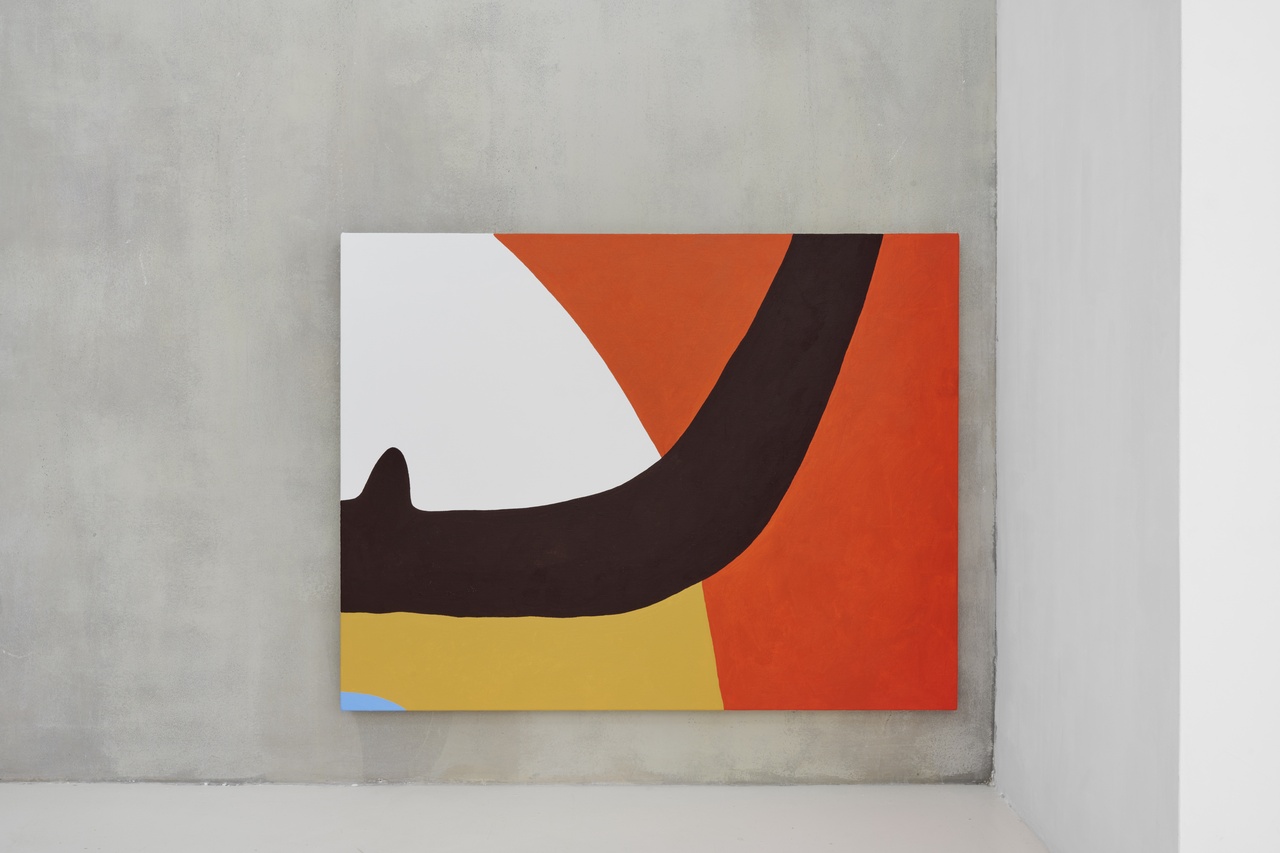 As I continued descending the spiral staircase to the basement and the paintings started to hang above me, the display I encountered upstairs began to repeat itself in a slightly altered loop in the basement. Two gray Room Based paintings and another series of Download paintings were presented under an exaggeratedly low ceiling. The space felt slightly oppressive, like an altered dream of repetition. Mostly, however, this carefully designed scenario made me notice the presence of the stairs. I read them as a metaphor of the viewer’s participation as a relevant substance of every exhibition, going from room to room, oscillating between rooms and occupying continuously changing positions to the paintings. Even the press text is Room Based, reducing information to a minimum, dodging the addition of value in a brief note by Carpenter to himself in the form of a reminder note. With the existential humor of a character in a theater of the absurd, fighting a possible oblivion, a possible symptom of exhaustion, Carpenter notes, “the reminder is to be Room Based.” [2]

But what exactly is Room Based? At that point, I thought I should simply throw myself on the floor and let myself be bewildered by the coded space of the exhibition, its spiral staircase acting as a viewing device for a chain of endless references: Its gray walls were not gray walls, they merely simulated gray walls, and like gray walls they framed the Download paintings/references. I let my brain melt trying to tie up those loose ends; I watched the ceiling start to spin, like the staircase; and I enjoyed this altered state as a child would do. I think “Room Based – The Paintings” is a mise-en-scène of a specific state of consciousness, where no symbol is stable, where nothing is more important – more “art” – than anything else, nothing establishes authority, power, demands a right way to be seen. Had the thief stolen something of value? Or just an empty signifier?

From my own perspective as a painter, all of Carpenter’s work functions as a vehicle for paradoxical reformulations. It is an endless improvisational and experimental practice, producing a visual soundtrack of white noise, which presses the nerve of pure possibility, mirroring the simultaneous saturation and emptiness we live in. Carpenter’s work is not really about painting; rather, it is about the plasticity of a medium capable of framing, flattening, figuring, and ritualizing the elements of perception. Perception as a provisional action, one that is subject to continuous transformation. Perhaps it helps us to perceive of other social realities in a world where we are quickly losing the ability to figure out what a radically different tomorrow might look like.