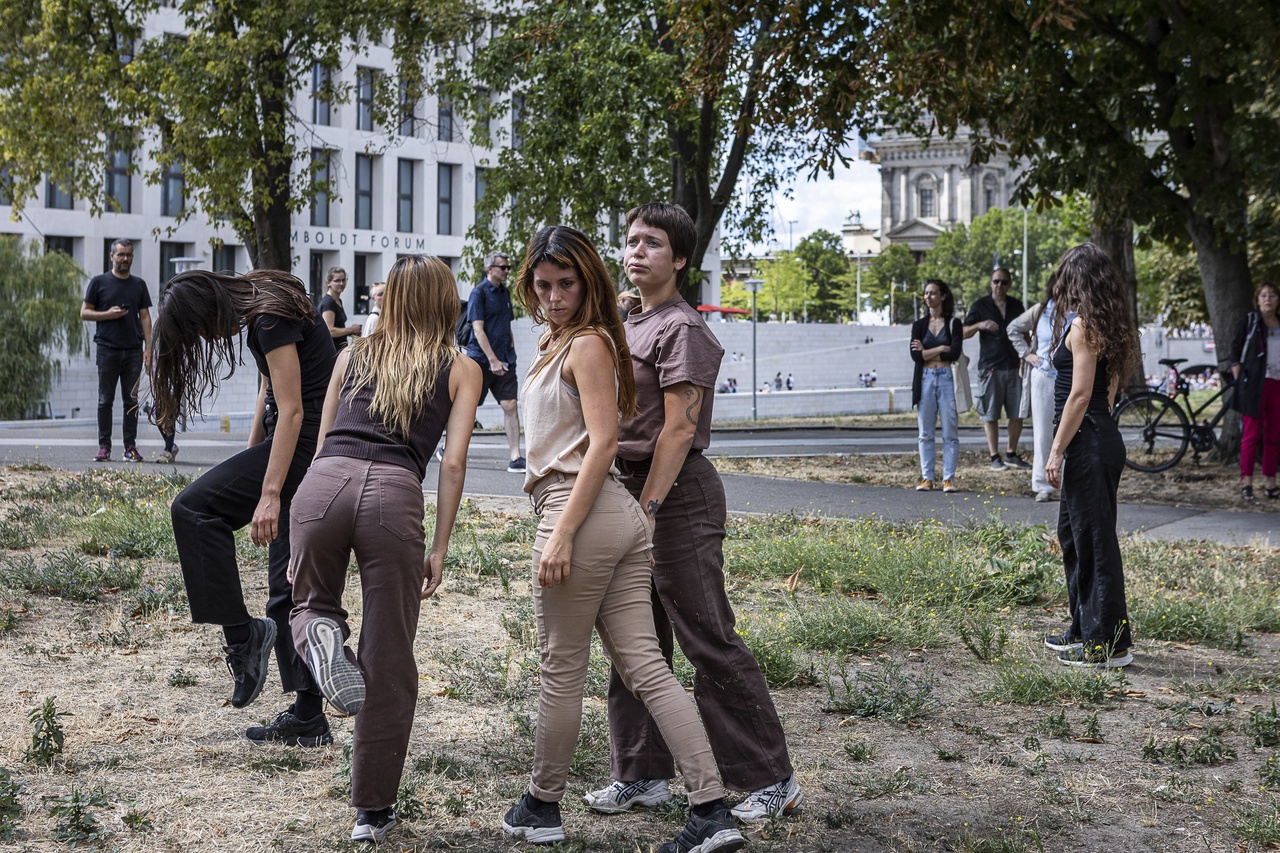 Big, shiny sculptures of bellicose men – emperors, kings, or confederate soldiers – on the back of vigorous stallions are a fixture of the urban environment. A performance by the Swedish duo Byström Källblad that was part of this year’s Tanz im August, Berlin’s international festival for contemporary dance, was determined to challenge this monumental male supremacy through artistic horse play by female dancers in Berlin’s reconstructed historical Mitte. However, as the art historian Jules Pelta Feldman argues, the choreography of City Horses did not so much reclaim a female presence in the contemporary cityscape through dance, but instead undermined the very logic of public monuments, drawing fresh attention to the question of who owns the city.

I had every intention of showing up on time for the start of Byström Källblad’s City Horses on a recent Saturday afternoon in August, but when I ended up more than thirty minutes late, I was not overly concerned. The piece, described as a “parcour” through Berlin, started in an inner courtyard of the Humboldt Forum – a place of blinding pale stone, sweeping both upwards and outwards, on bright summer days like this one – but was to meander around the area that a sign advertising a new office building next to the TV Tower dismayingly describes as “midtown,” running up to the tower and back down to the Neptunbrunnen and Lustgarten in front of the Altes Museum. It would then make its way down through Mitte, ultimately reaching Hebbel am Ufer’s HAU2 more than two hours later. I found this information on the website of “Tanz im August,” the late-summer dance festival that has brought cutting-edge choreography to Berlin since 1989, including pieces, like this one, that seem to blur the boundaries between dance and performance art. City Horses, first performed in Stockholm in 2017, had travelled to many different cities, but this would be its premiere in Germany.

Given their itinerary, I felt sure I could catch up with the performers, but as it turned out, I could not. I walked back and forth between the Neptunbrunnen and the Lustgarten, weaving in between apparently aimless tourists, peering around for – what, exactly? I didn’t know what the piece might look like. I had read that the choreographers, Sweden’s Helena Byström and Anna Källblad, intended to balance the tired monumental trope of the man on horseback with a herd of wild women claiming the city as their own. They claimed to “address the European image of male dominance and ask: Where are the women and their stories?” – thereby “reimagin[ing] the role of the female body in public space.” [1] Reading this description, I was skeptical of the idea that wild horse-women might restore women’s “stories” to the architectural landscape, but my imagination was stirred by the image that formed in my mind of leaping horse-women.

That day, I had to make do with the imaginary. But though I failed to catch the performance, my experience was still strangely aesthetic. There are risks to performing outside in the city, away from the protection of the museum or theater. In addition to sunstroke – it is August, after all – performers out in the world risk invisibility: how can the subtlety of art stand out against the blazing colors and sounds of a tourist metropolis? Yet this porousness can also be a great strength, if it absorbs the world rather than succumbing to it. Looking for performance, I saw it everywhere. That group of people by the fountain – were they perhaps watching something? No, they were lined up to take photos. Sitting on a bench by the Altes Museum, I heard a bell ring – announcing not a dance, but an ice cream vendor. The snatches of music I heard seemed like preludes to dramatic action. The whole city came alive for me – its streams of talking, walking, laughing, posing people, and yes, its monuments, the scenes and props of the performances taking place all around me. 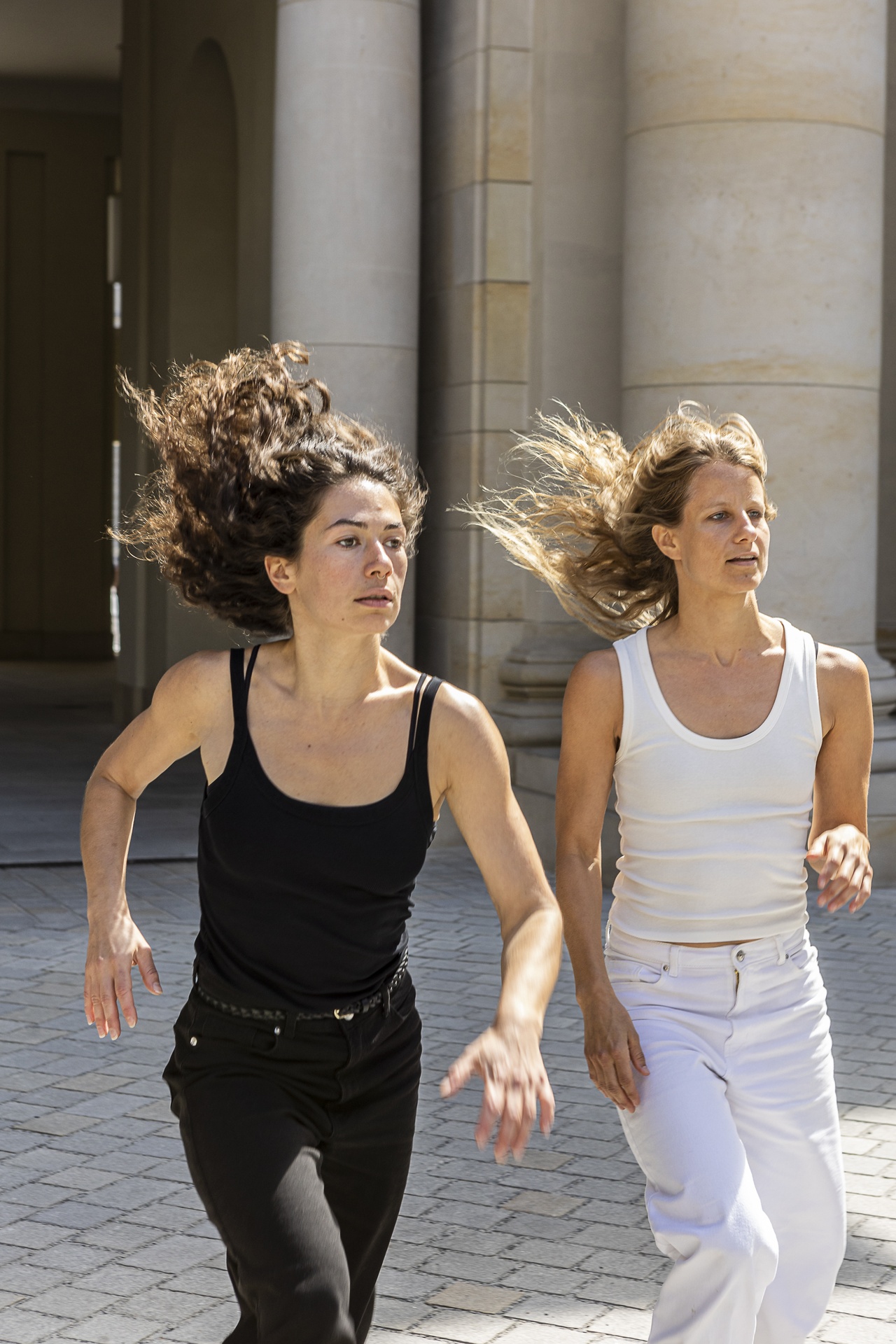 The next day, I arrived at the Humboldt Forum, the recently-reconstructed Prussian palace that Berliners love to hate, precisely at 1:59 pm for the second and last performance of City Horses. Behind the palace, which is the color of bleached bone, a group of young women had gathered near a doorway. Each was dressed in a single color, t-shirt and jeans either white, tan, brown, or black. These were clearly dancers, waiting to begin “backstage” (it is another difficulty of outdoor performance that there is none). They were warming up, prancing in place. One or two of them ran through the doorway into the courtyard, and I followed. The rest of the horse-women entered at irregular intervals, and once inside began walking or trotting around the courtyard. It was crowded, and easy to miss them at first. Though animal mimicry can easily descend into awkward cliché, the dancers’ repertoire included innovative interpretations of how to translate a horse’s movements onto a human body. An arm swung in front of the torso seemed to represent a tail brushed against the hindquarters. As the dancers walked, they undulated forward and inward, as if trying to approximate a horse’s forward-bending ankles and rolling gait.

Eventually, as the group grew in size and energy, and a space cleared around them. Sometimes they stood, alone or in groups, one heel lifted with the toes touching the ground like the edge of a hoof. One or two laid down, laboriously, on the ground, their elbows jutting out and their wrists turned awkwardly inward, an imperfect yet recognizable imitation of a horse’s lying position. At moments, the whole herd grew active, racing around the courtyard’s edges, leaping into the air, tossing their manes. Occasionally a lip-vibrating sound was heard, the kind of soft snort that children (and adults) make when they are pretending to be horses. There was neither humor nor pathos in the piece – only the frankness, strength, and beauty of animal movement. The women’s dancing tresses – not all of the performers sported long hair, but most did, and this was a boon – seemed at once to signify the performance of conventional femininity and a wild freedom from human interpretations of the body.

Soon, the dancers began moving through the back doorway that led out to the front courtyard. From there, occasionally coming to rest or to lay on the ground, they continued their prancing, running, and rolling steps through the dry grass of the Marx-Engels-Forum just adjacent, and across the street – waiting impatiently at stoplights, lifting one foot and then the other – towards the TV Tower. The crowd that had gathered at the Humboldt Forum to watch the performance followed, but most people in this busy tourist district did not know what they were seeing. Someone asked if it was a new kind of sport. The dancers circled, leapt, pawed the ground, stared blankly at the scenery. 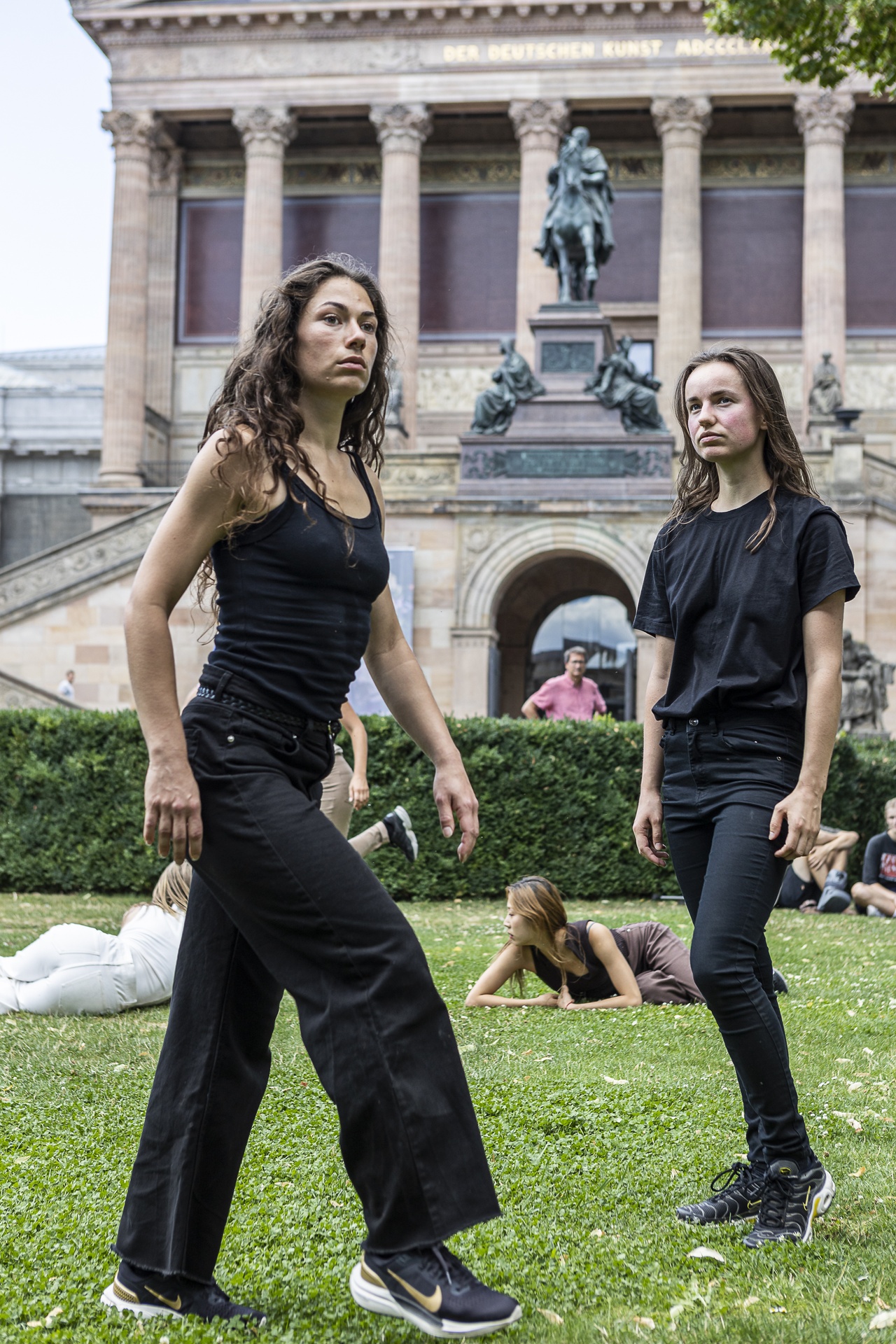 Berlin is a city of many monuments, but today, bronze men on horseback play a relatively minor role. The site of the Humboldt Forum itself – originally the seat of the Hohenzollerns, who united Germany and today widely seen to represent Germany’s failure to address its colonial history [2] – once featured an equestrian statue of Friedrich Wilhelm, “the great Elector,” but this was put in storage during the second world war and subsequently moved to Berlin’s Charlottenburg Palace. Perhaps the horse-women are there to take his place, undermining the legacy of Prussian rule that has been resurrected at the site. But what was their rebuke to the statues of Marx and Engels they passed in the park, fated now to gaze at the rebuilt palace? (Reconstructing the Stadtschloss necessitated tearing down the former East German parliament.) Did their wild hair and blank eyes append “women’s stories” to Schinkel’s Altes Museum, to Checkpoint Charlie? The idea seems to rely on a bizarre and anachronistic essentialism: women’s nature pitted against men’s culture. Yet I do see how this piece might challenge traditional figures of monumentality, if not in the way it seems to think it does. City Horses does not make a place for women in the landscape of monumental statues; rather, it undermines the very logic of such monuments. As the dancers gallop through it, the city is no longer an orderly place of heroes, where horses are part of culture, in service to war and aristocracy, bearing the weight of great men who molded history to fit their ambitions. Now, the city is a wild place, full of staring creatures that give the lie to such visions.

The dancers do not respond to monuments; they ignore them, refuse to acknowledge them, or, at least, to acknowledge them as anything other than urban furniture, features of the landscape they run through. The sheer horsiness of the women was not a centering of women within the discourse of the monumental, but a refusal of discourse. Perhaps that is a more fitting response to the moral and political bankruptcy of the equestrian monument.

Jules Pelta Feldman is an art historian, critic, curator, archivist, and salonnière. They are a postdoctoral research fellow for the SNSF project “Performance: Conservation, Materiality, Knowledge” at the University of the Arts, Bern. They are based in Basel.