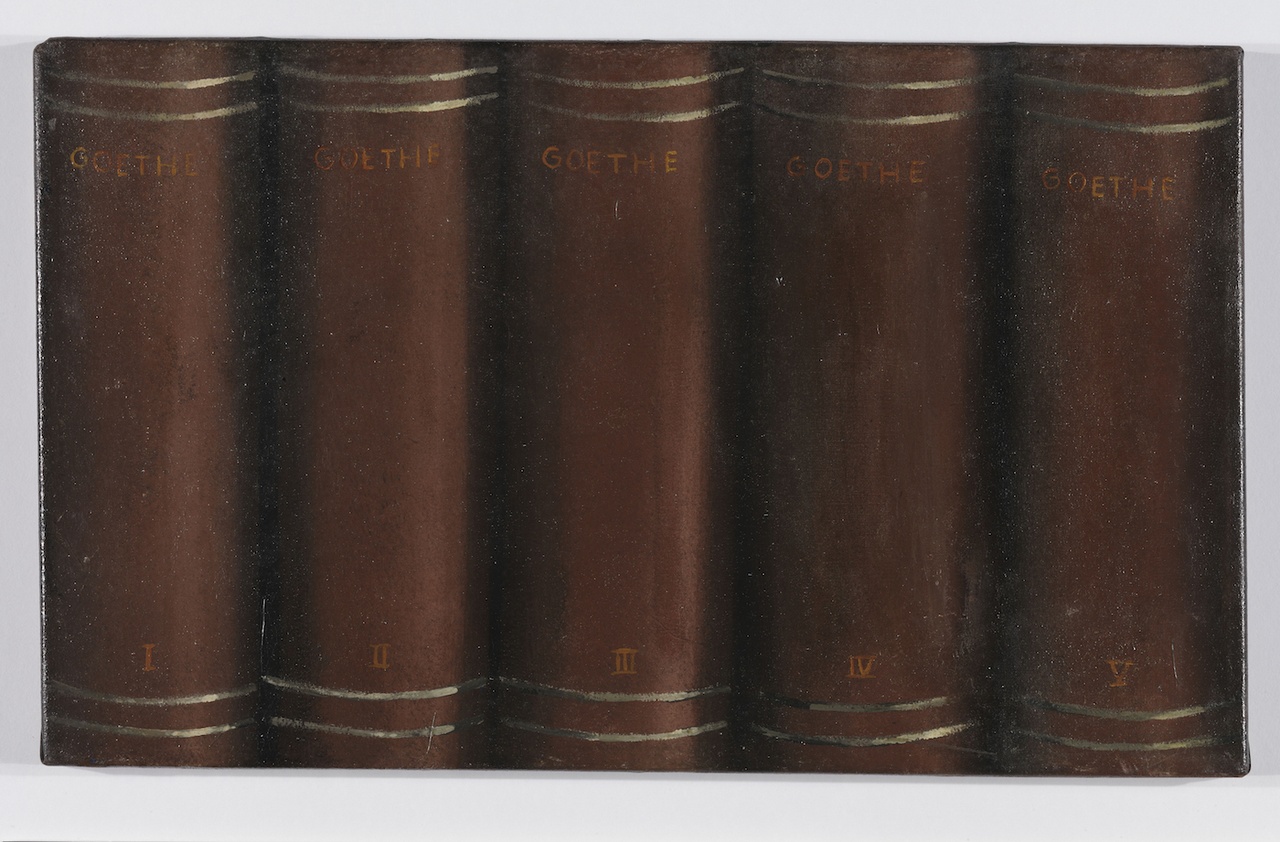 I liked the grand gesture: 25 years, 100 issues, a celebration at the Berliner Festspiele – THE CANON. Therefore, I accepted the invitation, even though I understood in that same instant the pretense that came with it – and who am I, after all, to make judgments regarding canonical positions? Yet nonetheless, apparently being someone sufficiently desperate for validation, I said yes (who can say no to being addressed as an authority?), confident that, by cleverly adjusting how the question was posed, I could place myself in an actual authorial position from which I could enjoy a piece of the anniversary cake without having to swallow the objections to the concept that have been elaborated over decades of canon debate. Perhaps I could offer a written equivalent of the mock canon of “Goethe’s Works” that Sigmar Polke brought into view in 1963. (These ideas coming to mind a few months before the due date – which is to say, in the most subjectively compliant phase of textual production, when the fantasy of what you want to say hasn’t yet been forced to answer to written reality.) And through self-experimentation I’d already externalized a preliminary insight: canonization is absolutely fine when you get to take part. (Exclusive relationships always feel better from the inside; or good enough, at least, to keep one’s guilty conscience about one’s own inconsequence at bay.)

I’d wanted, it occurs to me in hindsight, to put into practice, in the small scope of my article, what I’d interpreted as the grand gesture behind the issue and the celebration – to appropriate a justly discredited concept, after exhaustive consideration from all angles, in order to repurpose it for my own ends and make it productive. Of course, this skepticism of the canon is by no means an accepted fact or common standard; on the contrary, it’s often precisely during notoriously impenetrable, unstable times that people stick to the supposed need for a canon, although they’re aware of the insurmountable relativity of the criteria that constitute it. But a magazine like Texte zur Kunst actually has the privilege – unlike many of its authors, who teach and study in academic contexts – to distance itself from such circumstantial constraints. And the magazine happens to have made a name for itself in the past by analyzing the conditions of canonization (cue “Bourdieu”) or to feature art that does so (cue “institutional critique”).

You can ascribe the change of sides to the charm of subversive affirmation, as I reflexively did at first. After all, the appropriation of canonical claims has proven itself most effective as a strategic tool of the excluded – if you consider counter-canonical approaches motivated by, for example, feminism, post-colonialism, or subcultural theory. However, as a mimesis of the power games that underlie every canon, the idea of a “counter” canon only functions if you recognizably work to counteract the complicity with the very thing from which you’re setting yourself apart, and announce in blatantly obvious fashion your own exclusion-generating behavior. In year’s end “best of” lists compiled by fans, for example, where the guise of authority and the presumptiveness of canonization as an approach is circumvented through the arbitrariness and subjectivity on display, but above all through the diversity of authorship. That is, it’s not just about alternative content, but also and more importantly about alternative gestures and ways of writing – lower-case literature, embracing the minority, micro-politics, perhaps even micro-celebrities vs. mega-stardom.

In their challenge to settle on a canon, the editors rightly call attention to the fact that Texte zur Kunst does indeed participate in the canonization of artistic positions – that is, that it (no longer) holds a minority position. Thus, this issue is also about transparency, about laying bare, and not least about justifying the criteria of inclusion and exclusion that are more or less implicitly at work anyway. And it should also be short. Nevertheless, by appealing to an exclusive set of established authors to reflect retrospectively upon their power to determine the canon, the magazine ultimately makes its claim to authority more potent – a claim that, for its readers, is a relative one anyway, considering the conspicuous cliquishness that governs its production. As the objectification of preferences that one, as an uninitiate until now, might well have perceived as the product of a mixture of “liking things” (Warhol, Facebook), personal prejudices, and even good motivations, this lends the TzK canon an unnecessary gravitas, to which even this article, in its self-important lurching between “nevertheless” and failure, is heir. In the end, perhaps it’s precisely the grandness of the gesture (THE CANON!) that’s the problem, something appropriation can’t escape – in no small part because of the size and scope as a player in the field of art criticism and in the art system’s process of value creation (economic as well) that Texte zur Kunst has attained.