There is a subtext running through this issue, one linking the new “poetics” that has appeared in critical discourse of late (as a language characterized by an immediate, personal tone) to the protocol of contemporary global capitalism (e.g., the use of English language, the familiar “you” of neoliberal capitalism). Switching between TMI and cut-and-pasted corporate-branding speak, this intimate voice is not however, as some have claimed, necessarily an apolitical one. Rather, perhaps it is precisely in this language that the crisis of contemporary self-hood can be seen – a language that was at the core of this summer’s DIS-curated Berlin Biennale 9.

Here, art historian David Joselit takes stock of bb9, asking what signal, amid the stream of mediagenic poetics and visual branding, can be separated from the noise.

Walking around my Manhattan neighborhood, it occurs to me that something like three generations of frozen yogurt stores have come and gone in the past ten years. Branding, I say to myself, isn’t so easy. A brand commands attention by producing and widely disseminating an instrumentalized image. In an attention economy, branding is relevant to art because it exemplifies how images create collective identifications, if not quite genuine publics, through their representation of products or experiences. Many dimensions of branding are invisible in the final product itself: ranging from initial market research to data on consumption patterns. Consequently, to grasp its complexities requires much more than appropriating the rhetorical surfaces of advertising and commercial design. Branding is not a style, in other words, but rather an operation, which includes both an initial gambit for capturing attention and a long-term, always precarious effort to maintain “customer loyalty.” To take on such procedures, as so many of the artists in this year’s Berlin Biennial (bb9) have done, is a pressing and exhilarating problem – especially for a generation who grew up creating multiple profiles online. But too often the works included in bb9 address only the surfaces of branding – its style – rather than its deep structure.

Fashion does branding by generating perpetual novelty – a procedure dear to the art world, as well. But over the past hundred years, one can track at least four aesthetic models whereby artists mobilized what we now recognize as the brand. They include: (1) The ambition of early twentieth-century avant-garde visual culture to assist in transforming political subjectivity by branding revolution, as in the efforts of Aleksandr -Rodchenko, Varvara Stepanova, and Liubov Popova, among many others who aimed to abandon the special preserve of fine art in order to build new forms of advertising, fashion, and theater adequate to the ideals of the USSR. (2) The artist as celebrity, who produces a recognizable “product line” (silk-screened flowers, “Spot” paintings, “superflat” riffs on Japanese comics, and inflatable toys rendered in stainless steel) – intended to create value not through the traditional mechanism of scarcity but through media saturation. Andy Warhol is the relevant historical reference here (though Soviet or Chinese socialist realism accomplished an analogous elision of fine art and mass culture without a corresponding fixation on the personality of the artist). This tradition has been enthusiastically taken up by myriad others since the 1960s, including Damien Hirst, Takashi Murakami, and Jeff Koons. (3) Simulation of commercial language by artists of the 1980s (whose relevance to the post-Internet practices on display in Berlin is deeply repressed), such as Barbara Kruger’s and Jenny Holzer’s trenchant mobilizations of advertising rhetoric, which were meant to “subvert” branding by creating expectations for an affirmative message only to deliver a critical one instead. And also: (4) strategies for garnering attention – and thus currency – in our contemporary experience economy merely by remaining physically present (rather than appearing as a simulated or mediated image), as exemplified by Marina Abramovic, who demonstrated that performance art and Hollywood need not be in contradiction with one another in an era when screen-addicted people seem desperately hungry for face-to-face contact. I offer this genealogy not so much to criticize the DIS collective’s decision to ignore such predecessors, but rather to develop a critical perspective from which to evaluate their assertion of art’s convergence with such consumer-oriented operations as branding. I want to take seriously the idea that art can engage productively with branding, and to question how such engagement is staged in “The Present in Drag,” as this biennale is titled. In fact, DIS, along with other artist “corporations” such as e-flux, Reena Spaulings, and K-Hole, furnish an additional model for aesthetic branding: (5) structuring art practice as an infrastructure to provide a network of platforms supporting a wide variety of activities including exhibitions, publishing, fashion, performance, and even traditional object making. 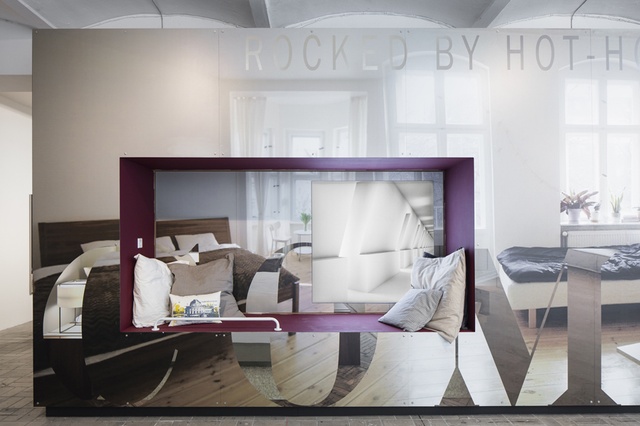 What is most disappointing about the Berlin Biennial is not DIS’s evasion of history, which may in fact be an ethical decision to sideline the kind of historicizing account of contemporary art that privileges critique of commercial structures of experience in favor of, for instance, the exploration of their affective properties, or perhaps a self-conscious provocation at a moment when so many artists seem to believe that since the Internet functions as an infinite archive, history has become irrelevant. Rather, what I find disturbing is the shallow engagement with branding that so many exhibiting artists demonstrate, where the “look” of corporate speech is mimetically reproduced in the absence of any deeper engagement with its quasi-imperial structure of accumulating and sustaining attention over time.

Take, for example, Debora Delmar Corp.’s “MINT” (2016), a juice bar installed within Berlin’s Akademie der Künste, one of five primary sites across which bb9 is staged. The work aims at making visible the contradiction between first-world consumption of overpriced yet supposedly hyper-nutritious foods and the fact that such luxury health products almost inevitably contribute to the often exploitative dynamics of trade with the developing world (the name “MINT,” consequently, is not just a reference to the kind of “green juice” for sale in Delmar Corp.’s café, but an acronym for Mexico, Indonesia, Nigeria, and Turkey). The implication is that to make these health foods, so-called green corporations are nevertheless paying suppliers to divert raw materials for end products that the vast majority of the developing world’s citizens could never afford.

While Delmar’s intentions here are -worthy, the work’s visual resolution is banal and amateurish compared to the actual branding of fast food chains everywhere (“healthy” ones included). It is hard to compete with such forms of commercial art – ranging from store design to fashion – that are so much more sophisticated in their modes of aesthetic persuasion than artists’ pale imitations of them. Delmar’s gesture toward verisimilitude leaves us on the level of branding’s surface – it’s style, rather than its procedural structure. This is because such simulations are divorced from the exigency of an actual brand’s imperative to continuously respond to changing market conditions. The brand, in short, is a dynamic organism, not an idiom to be appropriated. In this regard, it seems to me that the only truly successful corporate brand in the Biennial is DIS itself; and this is largely because it has submitted itself to market testing in the art world through, among many other things, the critical debates that are taking place in these pages. 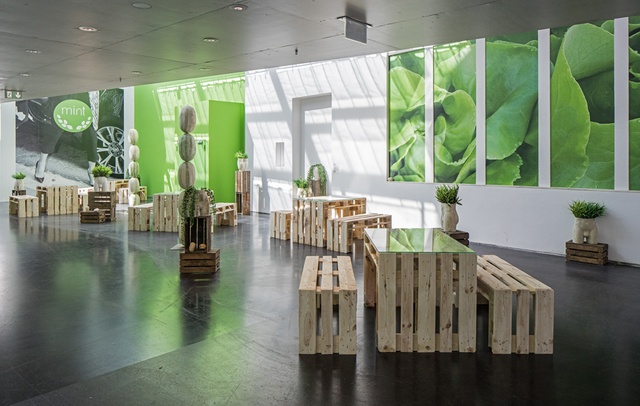 There is, however, an important additional model that is much more convincingly presented in “The Present in Drag”: (6) The subject as brand, whose relation to herself is mediated by the imperative toward self-improvement and self-perfection (what Michel Foucault identified as the entrepreneurship of oneself, and which now might be more aptly understood, per DIS, as the curatorship of oneself). Such forms of self-enrichment are deeply imbricated in contemporary forms of over-identification between persons and products. These two dynamics – self-enrichment and consumer identification – establish a kind of feedback loop whose alternation of alienation and incorporation, self-as-surface, and body-as-malleable-matter is eloquently captured in the “drag” of the Biennial’s title. It is the slick relentlessness of this vicious (or virtuous) cycle of accelerating consumption and escalating subjective value that marks a difference from earlier explorations of the subject as brand in, for instance, the politicized figure of Reena as rendered by (the novel and related projects) “Reena Spaulings.”

A range of experiences of self-becoming-brand are represented by artists in the exhibition: Cécile B. Evans establishes a multi-dimensional character, HYPER, as a cypher of corporate personhood in “What the Heart Wants” (2016); John Rafman represents animals devouring each other in a range of sculptures collectively titled “L’Avalée des avalés” (The Swallower Swallowed, 2016) and an Oculus Rift VR presentation, “View of Pariser Platz” (2016); and Korakrit Arunanondchai/Alex Gvojic establish cycles of evolution and devolution between human and animal forms, framed by consumerism in their 2016 film “There’s a word I’m trying to remember, for a feeling I’m about to have (a distracted path toward extinction).” Here are modes of embodied “drag” that establish specific affective relationships between digital animation and animality, self-possession and self-cannibalization. It is precisely in such questions of what it means, as a person, to become a dominant and dominating image – i.e., a brand – that art is relevant. It can explore the imperative to curate oneself, to construct subjectivity as an aggregation of images.