“The New New Left” – the theme of this issue – is not entirely “new new” as it shares some features with the old anti-capitalist Left (such as the insistence on the need of a theoretical analysis of capitalism, a focus on the price that is paid by many in such a system, etc.). But given the political events of the past year (the refugee crisis, Brexit, Trump, the rise of an identitarian alt-right), it’s clear today that the Left is anything but singular, which makes its current manifestation(s) even more urgent to define. Furthermore: since many strategies and discourses long associated with the Left (from the avant-gardist “trickster” mode to identity politics to workerism) are being adopted by rightist and fascist-leaning groups, it has become increasingly challenging and complex to locate a Left stance from which to effectively speak and act.

Our “New New Left” issue – which was developed in dialogue with Diedrich Diederichsen, Helmut Draxler, Isabelle Graw, Susanne Leeb, Juliane Rebentisch, and André Rottmann – outlines the contours of such a position in manifold ways. The first text is an exchange between German sociologists Sabine Hark and Sighard Neckel. This April, the two scholars sat down to discuss how emotions have been politicized toward nationalist ends: how, for instance, shared feelings of embarrassment and resentment among a newly precarized white working class have found form in an identity politics of racism, which is then cybernetically reinforced by right-wing groups who endorse it to garner popular support. Yet rather than simply condemning intolerance, Hark and Neckel seek to understand how it is constituted by underlying affect.

If affect is one factor playing an outsize role in the rise of right-wing resentment, media strategy is another with reactionary beliefs – fomented in the communicational channels of online blogs, comments sections, and imageboards – now taking hold in broader arenas. While some might argue that engaging these spaces risks further normalizing the regressive ideas they harbor, it is nevertheless crucial to analyze the machinery that spawns them. In his text for this issue, Matt Goerzen takes up viral media – i.e., memes – examining why and at what point the Right came to dominate this means of cultural production and how the Left might again take control.

And indeed, the socially conservative, techno-libertarian NRx (neoreactionary) position and the broader alt-right were arguably born of these post-millennial media spaces, having rapidly expanded into an intensely supra-structural movement, overwriting democratic processes with so-called meritocratic ones (in practice: racism). Somewhat confusingly, however, the alt-right’s mode of engagement often resembles – if only in its sarcasm and aim to disrupt – strategies and tactics classically associated with leftist/artistic anti-establishment critique and avant-gardist nihilism. And it is here, Ana Teixeira Pinto contends, that cultural institutions – whether local project space, academic journal, or MoMA – are being put to the test. Just because a given idea is exceptionally provoking does not, she asserts, justify an institution’s choice to broadcast it (as, for example, London’s LD50 gallery did, causing great controversy in turn).

Diedrich Diederichsen also writes about the role of institutions in polarized political times, and the ways in which they compel individuals to act. He notes that, nevertheless, ad personam attacks (e.g., online flame wars) are essentially useless in effecting actual change. Inversely, he argues that, while personal testimony can help to make visible and also humanize larger systemic problems, the singular experience must not be used in a way that forecloses political analysis. Just as one cannot blame the individual for how structural-institutional powers shape it, neither can a singular voice be accorded such weight so as to exclude or disqualify the views of others, even if directly contradictory.

But where does the institution end and the individual begin? The mask has long been a tool for obscuring that divide, as individuals wishing to act against the institution’s (here, nation state’s) command conceal their identities by joining an autonomous legion. Yet decades of leftist protest in democratic systems have rendered such acts of anonymous political resistance as a legible (thus, controllable and so in this case, powerless) sign. Seeking new layers of indeterminacy, Jaleh Mansoor opens up this age-old battleground of representation, taking into consideration both language’s newfound excitability – thanks to the digital sphere’s difficulty distinguishing between verbal and physical acts – and the inevitable failure of words to materially solve contradictions that they can so clearly explain.

Anonymity is something that Seth Price recently employed, testing the degree to which his practice – and political expression – is determined by obligations of authorship. In this issue, he speaks about www.organic.software (now revealed to be his initiative), an online collector database that aggregates portraits, street views, political donations, and corporate affiliations of the individuals they describe. Questions of authorship likewise figure centrally in Simon Denny’s text. Speaking about his recent work “Real Mass Entrepreneurship,” which addresses the (open copyright) tech ecology of Shenzhen, China, he specifically considers what happens when capital is denied the singular author, and whether a model favoring masses of individuals creatively innovating (contra production aggregated under a single name) can be sustained.

The agency of celebrity can also work in positive ways, however. Indeed, Pop stars can wield the influence of a nation state in opening popular convention to culturally progressive thinking (e.g, Beyoncé contra entrenched views of gender, race, and class.) Yet it is precisely this normalization via celebrity (another form of populism?), writes Klaus Walter, that has in equal measure fueled a conservative resistance, a resistance now able to honestly claim the cache of “alt.” Of course, “alternative” thinking need not be Right, nor need it be some precious reification of ’90s “indie” – see pieces by Verena Dengler and Dan Bodan for two examples. It could, however, inform what a contemporary Left could be, a new New Left for our post-millennial, post-financial crisis, post-Brexit/Trump, now. 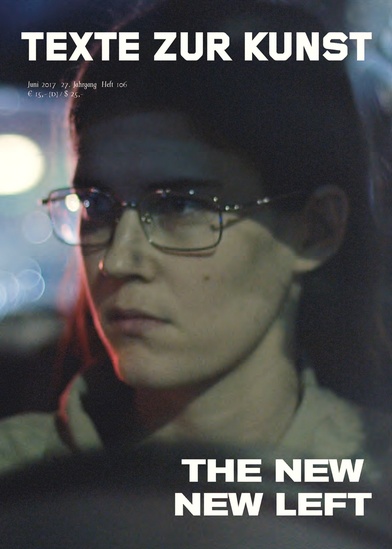