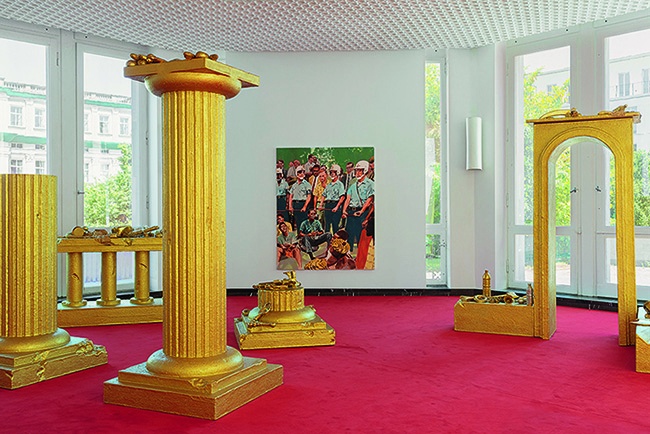 It remains difficult to answer: What position can or should art take in these highly alarming times in terms of persistent racism and sexism, for example, and what role do art institutions play in such dynamics? In any case, it is clear that these questions have to be revisited again and again and that we, as artists, cultural workers, and critics should regularly become aware of our respective positions. John Miller has long devoted himself to institutional and self-criticism in his artistic practice. Whether he is able to formulate the political grammar of our time is something that art historian Genevieve Lipinsky de Orlov examines.

John Miller, like me, is a US citizen whose life is divided between New York and Berlin. There is an inherent tension to this type of geographic duality, a constant toggling back and forth between homesickness and escapism, between different, often conflicting, political and social realities. It’s a lifestyle that involves both dissociating one’s identity and citizenship and realizing their mutual and immutable dependence.

Miller’s exhibition at Schinkel Pavillon, “An Elixir of Immortality,” the artist’s first institutional survey in Berlin, elicits some of these tensions. In the tiled bowels of Schinkel’s ground floor, Miller’s photo series The Middle of the Day (1994–present) places Berlin façades next to New York streets, saturated American deli meats next to banal German still lifes. What might appear as disorienting curatorial groupings is legible as life oscillating between two places, with the series composing a unified, consistent whole. Two nearby PowerPoint presentations, In the Middle (2015) and Reconstructing a Public Sphere (2016), also take as their settings Berlin and New York, respectively. Both stitch together slides alternating text and image, but coherence is lost in their celerity and the images’ interruption of thoughts mid-sentence. In In the Middle the artist’s fleeting apothegms flash by: “reality is boring,” “political persecution is un-fun,” “paradise is intolerable.” The text is stripped of context, leaving uncomfortable moments when, for example, Miller asks of himself, “Am I a refugee?”

The presentations have a nostalgic tone, characterizing pasts – Berlin before the Wall fell, New York before 9/11 – as more authentic than the superficiality of the globalized, digital present. But the political context in which the exhibition finds itself has no room for such romanticizations. “Elixir” opened on June 6, the same day as Berlin’s massive protest against racism and racialized police violence at Alexanderplatz, a short walk from the Schinkel. I visited the exhibition and then attended the protest. The juxtaposition of these two events – Miller’s Americana symbolism, its glut and hyperbole; and the protest’s urgency and heterogeneity, its potential for lethality – echoes the struggle the art system now faces. The fallacy of art institutions’ claims to neutrality and the trouble with indeterminacy in contemporary art become most glaring against the sharp backdrop of political action and its unequivocal demands.

Many art institutions finally appear to be listening to critiques that whiteness also pervades their spaces and programs and that, as such, they participate in systems of oppression. Institutions reckoning with this awakening tend to negotiate between acts of solidarity and actual changes to institutional structures and practices. Viewing “Elixir” at the height of the protests, the question of what responsibility artists and exhibition spaces bear with respect to political demands loomed heavily.

Mourning’s most imposing ruin is a large, pie-slice fragment balancing on its widest end, its golden edges jagged from a rough break. Miller explains that it is a manufactured replica of a piece of the massive granite bowl in front of the Altes Museum, 700 meters from Schinkel Pavillon, thus meant to “gesture toward site-specificity.” Referring to the original in his notes in the exhibition’s accompanying booklet, Miller asserts that “Hitler, among others, appropriated it as a kind of stage prop” and that Hitler gave speeches in front of it. In actuality, the bowl was moved in 1934 to make way for Nazi rallies and wasn’t returned to its original location until 1981. [1] Hitler indeed pontificated from the steps of the Altes Museum, but he did not exploit the bowl for fascist ends. 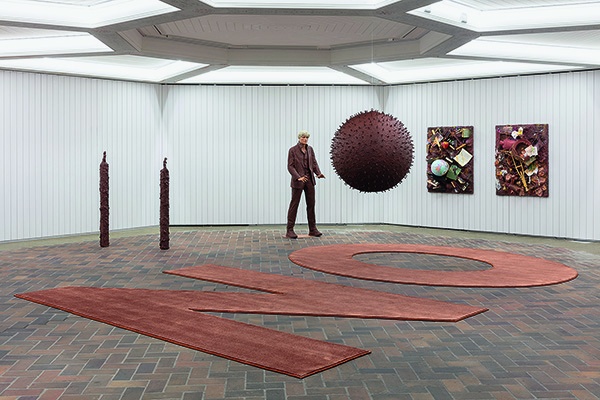 Miller makes another reference to German fascism in his notes, admitting that an earlier ruin installation was titled after a phrase from Hitler’s architect, Albert Speer. To whatever degree Mourning is intended for consideration in formal or ironic terms, the references Miller provides in his notes maintain a political dimension that is not readily definable, yet cannot easily be ignored. Classical architecture as a standard of idealized aesthetic principles, and its invocations to legitimize political regimes, inevitably entangle Mourning in questions of value and ideology.

Proximity to the Altes Museum does lend relevant context to Mourning’s legibility. In his essay on “The Postmodern Museum,” Douglas Crimp recounts Aloys Hirt’s absolute opposition to Karl Friedrich Schinkel’s plan for the Altes Museum, commissioned by Friedrich Wilhelm III in 1822. Hirt hoped the museum would promote the revival of art through the study of classical antiquity, but Schinkel’s plan, he argued, subordinated the art to the architecture. [2] For Crimp, Hirt’s attachment to the classical norm in art “could only be false nostalgia, a denial of the present’s realization of historical progress.” [3] Mourning, in its ruinous, littered state and tacky, gilded splendor, its shameless inauthenticity, probes history’s relationship to the present and traditional value systems: economic, yes, but also aesthetic and political. It can be read as yearning for the resurrection of a glorified, bygone past – a denial of progress – or a parody of the values the ruins’ classicism can represent, an interrogation of their signification as authoritative markers of hegemonic power.

The paintings encircling Mourning cast doubt on its possible representation of a gilded decline of this power. Two “fake social realist” canvases, both Untitled (1987), depict clear authorities: a cowboy, engrossed in feminine flesh, and police officers, barricading a civil rights sit-in. Based on photographs, they retain a flattened quality, their forms treated plainly and delineated sharply. The white police officers hover over Black protesters with batons at the ready, forming a barrier between the protesters and mostly white onlookers. The painting, and the archival photo on which it is based, represent one moment in a long, violent history of racist policing that continues to unfold in real time.

These canvases are paired with two smaller, more painterly works: Untitled (1984) and Untitled (1985). One features a devil against a fiery sky, presiding over treacherous waters with his cock in hand. The other is a portrait of a nun, her head slightly bowed, almost mannerist in her distorted features. The four paintings’ arrangement on alternating sides of the octagonal room sets up a calculated dialogue: the cowboy and the officers in their stylistic affinity hang as if a diptych, the officers neighbor the grinning devil, and the nun nods toward the rapacious cowboy, who mirrors the masturbating devil. They form a web of gazes, dominating and condemning, that traverse Mourning and establish a normalizing force in the space.

This should not be taken as an indictment of Miller’s work as reducible to fixed or purely political interpretations. Rather, the polarized and fatal sociopolitical conditions that characterize life right now supply an additional lens through which to view exhibitions and consider how power operates within and beyond the art system, including in its racialized and gendered dimensions. For viewers often left out of constructions of power, this lens becomes crucial to an artwork’s or an exhibition’s effect. Its application can challenge institutions’ reluctance to unsettle standard practices and narratives, and embrace demands of the moment. 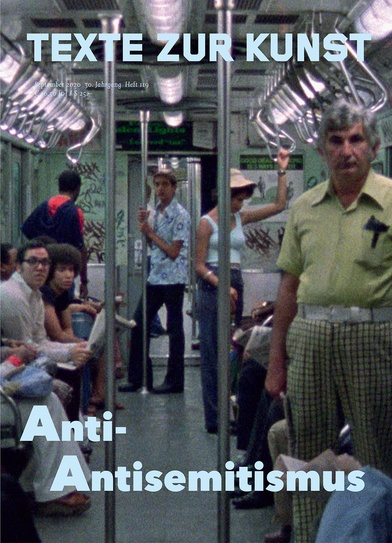