Until recently, Martin Kippenberger's work was considered difficult to exhibit, and there have indeed been enough examples of posthumous attempts to communicate his work that have gone wrong: the presentation of parts of the Schürmann Collection at Düsseldorf's K21, with its funny chaos in style of the 1984 installation "Peter", or the Flick Collection in Berlin, which was not only heavily burdened in historical terms, but Kippenberger's works were dwarfed by the imposing factory atmosphere of the Rieck halls and their placement next to Franz West. In view of Kippenberger's precision in the area of printing, some of the catalogues recently also seemed unjustifiably crude and garish ("Das 2. Sein", -Museum fur Neue Kunst Karlsruhe 2003, or copycats like Tim Nye's "Bermuda Triangle" from 2006).

These fears of the impossibility of exhibiting his work however had to be revised after the large Kippenberger show at Vienna's MUMOK in 2004, although the works here also seemed a bit lost and inanimate. All the same, the catalogue for this exhibition marked a turning point in that it subjected Kippenberger's work for the first time to detailed inspection, thus preparing it for a more extensive treatment. Since the Tate Modern / K21 exhibition from 2005/2006, a reductionist approach in exhibitions as well seems to have established itself. Here, one does not bother with representing original states, but it in a sense uncovered Kippenberger's works, which is why a great deal speaks in favor of keeping things quiet on the museum front.

"Hey, he could paint" - this is thus not the worst of all reactions, considering that at the moment there is no threat that Kippenberger will only be historicized by way of painting. Not the swastika picture or other "bad" pictures from the 1980s are today considered the center of gravity of Kippenberger's work, but the large installations of the 1990s, above all, "The Happy End of Kafka's Amerika" (which however does not mean that Diedrich Diederichsen's warning of Flick's appropriation of the swastika painting was not fully justified). Before this background, Martin Büsser surely goes too far with his claim in Konkret: "hey, he really couldn't paint." As honorable as his attempt might have been to save the punk in -Kippenberger, it also represented an abbreviation that is typical of the Kippenberger reception. That this artist laughingly established a place for himself in the non-significance of art in general and his own productions in particular is only one of the readings that is lazily dragged along. The image of the poser within a postmodern condition, who, whatever he did, didn't mean it that way, has by now become so established that it is confirmed by every new smile that slips out of a visitor beholding the artist's work. Now there are misjudgments in the evaluation of other artists as well, but Kippenberger insured himself less against them, or with his humoristic arrangements provoked laziness in the reception of his works. Now it must be admitted that in the meantime - caused by the broad institutional recognition (and the comfortable absence of the artist) - an attitude change has taken place, which, in comparison to the journalistic responses during his lifetime, is quite astonishing. The new goodwill however reaches its limits whenever only the "extraordinary artist personality" is emphasized, the provocateur and rebel of the art business who understood so well how to "beat" the system.

But Kippenberger reception is today primarily totalized by way of the anecdote and the personal, and even older nick names and signs of participation are still invoked: Kippi, Kippy. Here, neither the medium nor the country plays a role, for the British press reacted no differently than the German press ("brilliantly bonkers", Times, "The German prankster", Observer). There, for example, the fabulously irrelevant issue of what influence Kippenberger had on British artists, which Lucy McKenzie had already answered with "practically non-existent", is suddenly upgraded to "immense", "scarcely possible to overestimate". Eduard Beaucamp (FAZ), impressed by the many English pronouncements of respect, discovered in Kippenberger the well-loved figure of the cunning strategist who holds all strings of the chain of significance, so popular in the 1980s. His legacy, Beaucamp argues, consists primarily in his involvement with that "cynical", smooth culture of success that today, sadly, has replaced a jaded "radical outsiderhood".

In light of these rigid attempts at historicization, hardly touched by current exhibitions, it is difficult to accuse of all things a format like the film portrait - so condemned to an eager zealousness and human touch - that it lets the old times longingly come back to life. After all, even if unintended, the documentary by Jörg Kobel recalls not only of the charming sides of Kippenberger as a person, but also the often quite grizzly realities in the Cologne art context of the 1980s, his castrative presence, the system of acquaintances etc. All the same, the tie-back of the artist to his biological family is a constant here that is much more spooky than the eternal artist stories from his active time. While on the one hand it is the artist's sisters who have invited us to partake of their homemade cake and cookies - curators to this day still ask for report on the artist's biographical background, most recently for the Tate Modern/K21 exhibition. Adrian Searle on this in the Guardian: "The best essay here is by Kippenberger's younger sister, Susanne. She describes her brother as a romantic who 'wanted a happy end'. This short memoir is very moving." The touching Kippenberger, the Kippenberger of negation - such fixations need not necessarily damage the posthumous reputation, but they also don't initiate any new approaches. That the self-portrait played such a large role in Kippenberger's work still today invites crude misjudgments and errors of category. In the self of the self-portraits, still above all an egocentric is supposed. But it would help already to apply what in literature has been a platitude for one hundred years: that the self of fiction is not identical with the author. But this means that one would recognize first of all the fictional character of art, and then expose the constructivist system in the space of which critique (that can run through all degrees from tribute to invective) is mixed with devaluation of the artwork and the staging of his own implication (with rules, preconditions, ideologies). But one could also pay attention to the great number of those objects that seem more or less "nonfigurative" - here a little wooden board, there a splatter, there pasted acrylic forms - but which nonetheless exist and attest to Kippenberger's heuristic principle of working. It is astonishing how the fact of theoretical work is reflected in Kippenberger's oeuvre, where the important fields of his time are addressed and distinctions considered (arbitrariness of the sign, exchange functions of the speech act, psychoanalytic theories of the subject) - without a textual foundation, as it were. Kippenberger's production emerged before the backdrop of post-minimalist conditions that lastingly shifted the frame of art production. The dominance today of large spatial works and the "installative", the overlap with areas outside the fine arts (literature, music, fashion, film, the decorative arts) is not just an indication for a growing permeability of artistic practices beyond disciplinary limits and far beyond art-immanent problems. Rather, we see here completely new forms of representation that not only make possible such linkages, but also demand them. Perhaps this development was initiated by the first newspaper clipping pasted on a canvas, but it is certain that although Kippenberger was not the only one who ensured this disposition recognition, he vehemently participated in it. Academic art training since the 1970s has transmitted hardly any of this, and even today it is not easy for art criticism to grasp this state of affairs in all its implications beyond the aesthetic and the historical. 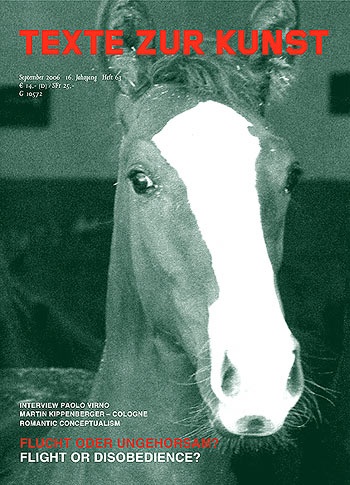