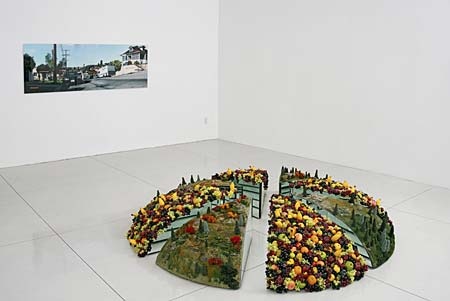 John Miller's typically intelligent and engaging exhibition consists of fifteen photographs overlaid with texts taken from on-line dating profiles posted on Lavalife.com and its associated gay male and lesbian sites, Manline.com and Womanline.com. In order to gain access and survey the range of listings, Miller submitted a subtly parodic profile of his own, deducting ten years from his age and proclaiming that his idea of a fun date was "attending a lecture" (no doubt the reason he received no response). Another part of Miller's deception concerned the place that he lived. Although a resident of Berlin and New York (where, though I have never met him, he is a colleague at Barnard/Columbia University), he listed himself in zip code 90036 in West Hollywood where the images were initially to be shown. For the presentation in New York Miller also included the sculpture "The Corpse" (2006), a low, rounded half sphere cut like a cake into eight wedges, the interior angles of which are mirrored and the tops of which are covered, alternately, by model train-like miniature landscapes and masses of plastic fruit. It resembles both a Robert Smithson "Non-Site" and one of Jim Shaw's materialized dreams. As with works by Smithson, the gallery thus figures as the dialectical counterpart of a "site" located somewhere beyond its confines: in this case, both the urban geography of Los Angeles and the realm of virtual reality. And if the virtual half of this domain (at least) acts as a forum to project, if not realize, one's dreams and/or fantasies - both of one's self and of one's hoped for partner - it also forms the locus of those processes of informatization and feedback that form the society of control.

Miller traces the roots of his current project to a 1987 sculpture in which he juxtaposed the more "refined", tasteful request for a relationship in "New York Magazine"'s personals section with the more abject, vulgar proclamation of interest in a specific, fetishized body part published in the socially and economically distinct venue, "Screw". In place of the earlier work's dialectic of high and low and sublimated and desublimated desire, Miller's current investigation generates an almost statistical report, complete with graphs and a full listing of the 166 separate internet profiles posted for the ten-mile area around the neighborhood where he claimed fictitious residency. These are made available in a brochure, free upon request, reminiscent of the one Michael Asher gave away at the Museum of Modern Art's exhibition "Museum as Muse" in 1999, which listed all the artworks deaccessioned from the museum's collection of painting and sculpture. In his essay, Miller also makes explicit a connection to earlier conceptual strategies by invoking Douglas Heubler's "Variable Piece #70 (In Process) Global" (1971), which proposed to photograph every living person in the world. If, as Allan Sekula noted, this dream could just as easily be regarded as a nightmare of total surveillance, the situation Miller investigates has transformed again such that voluntarily delivering up intimate information has become a means of entertainment and potential sexual fulfillment - Foucault's biopolitical investment in sexuality now evident in its most advanced and ambivalent guise.

Miller approaches his subject as a symptom of modernity. "The very idea of advertising for a partner", he writes in but one of many astute observations, "is predicated on at least five historical factors: i) a critical, i.e., cosmopolitan, mass of advertisers and readers; ii) human sexuality construed as a kind of market; iii) the relative equality (thus, exchangeability) of partners and competitors; iv) the ability to construe mating as a form of consumption or leisure activity; and v) a concomitant rationalization of sexuality itself." Lamenting the increased administration of the internet dating sites' data mining, Miller compares the individually written print ads — which "[d]espite the battery of readymade acronyms, code words and special jargon" still allowed a modicum of individualized "self-representation" — with more streamlined internet interfaces that "have filtered out everything that, not long ago, seemed illicit or quixotic about personal ads."

Although not expressive, a feeling of loss nonetheless echoes throughout the photographs. In a manner reminiscent of Roy Striker's giving shooting scripts to the FSA photographers, Miller provided photographer Tamara Sussman with a generic list of sites to document - the interior of a parking structure, a secluded spot in a park, a bar, a kitchen, bedroom, bathroom, and so on - all chosen according to Miller for the manner in which their "various spatial codes sanction or prohibit sexual behavior". Each of the exhibited images was paired with a single profile, with the exception of two untitled panorama-like shots across which Miller distributed snippets from different postings to create a sort of ambient murmur: what he described as "the effect of a chorus". The first of these panoramic images depicts a street containing only the traces of cars and people, most notably the graffiti that tags each of the upright metal bollards - signs that someone "was" there, structurally analogous to the temporality both of the photograph and of the internet postings strewn across its face. The second depicts a hillside neighborhood avenue complete with automobiles and pedestrians. More prominent than any of the people, however, are the street signs and license plates, "information" that visually resounds with the phrases typed across the surface (and which renders odd and slightly suspicious the prominent lack of text on the cargo truck parked just to the left of the phrase "I've recently learned the true importance of communication"). In "20. Bolson7" and "31. Danotanik", the children in the playground and the man in the bar appear as mere remnants, perhaps reminiscences, of a more vital inhabitation. This sense of evanescence coheres with the impression that, while all of the images save one were taken during the day (even the darkened bar as evinced by its few inhabitants), none really seems bright. "I live in a cave, barely get out", writes Doktor Gonzo above an empty, graffiti strewn, cage-like pedestrian walkway, "Then there is work, the other cave, no light …"

The majority of the single profile photographs (which are stronger than the panoramas) are without people, and they betray something of the air of crime scene documentation. This is perhaps clearest in "77. Kali Girl", shot from outside a car's rolled up window, which shows a folded-back car seat and a stained white napkin. (She was looking for someone "at least 6'2", and a member of the LAPD SWAT team".) A similar sense hovers about the semi-filled parking structure in "83. Kid Karate"; the deserted social club in "33. Davepak" with open door and large black garbage bags out front; the empty restaurant or café in "126. Say Ahh"; and the unmade bed (perhaps with a bit of sleeper's body) in "96. Marcella". "Looking for a partner in crime", writes Firemuse atop a partially hidden stone park bench; "Feeling larcenous?"

It was, of course, Walter Benjamin, who famously described Eugène Atget's photographs of deserted Parisian streets as "like scenes of crimes". Although Benjamin clearly had a great fondness for the individual sitter's "aura" as captured in the earliest era of photography, he regarded Atget's evacuation of the human countenance as signifying the historical transformation from the bourgeois public sphere and era of humanist subjectivity to a mass realm that would open onto either proletarian revolution or the conformity of monopoly capitalism.

From Andreas Gursky's Wall Street panoramas to Stan Douglas's Detroit photographs to Martha Rosler's airports and Sekula's shipyards, the overriding critical stake of recent photographic practice has revolved around the depiction of the social spaces and public sphere of late capitalism. One pole within this discourse (and, like Rosler and Sekula, one of the points of connection between the legacies of photography and conceptual art) is represented by the work of Jeff Wall, whose staged, computer enhanced panoramas attempt to reconnect with the type of bourgeois public sphere depicted in Nineteenth Century paintings, the irrevocable transformation of which Benjamin saw captured by Atget's lens. Whereas Wall seeks to foreground and recover a continuity more important, to his mind, than any of the intervening historical transformations, Miller deftly encapsulates an emergent present wherein mass subjectivity has been re-individualized but only in the form of information avatars - data sets that ghost the ever more crepuscular physical spaces of daily existence, a public sphere emerging on the far side of the postmodern eclipse of any outside to capital. No matter an individual's age, height or sexual preference, profiling oneself on-line, whether for meaningful relationships or gratuitous sexual encounters, delivers precisely the matrixed data sets necessary for commercial marketing: "what first purports to be an unfettered expression of inner selfhood ends up mirroring an external social order." Although Kidkarate can still declare without evident irony, "it's important to live in the moment, dream of what may be, and do what makes you happy", Miller provides a compelling image of an era in which "'direct contact' always involves a middleman - be it Microsoft or Lavalife - who seeks profit from the transaction in question". From a perspective in which interpersonal relations prove increasingly informatically mediated, the strategies of conceptual art seem less avant-garde operations than maneuvers on the border of discipline and control. Miller's "Total Transparency" provides a suitable image of a public sphere in which conceptualism's much vaunted "dematerialization" foretold, not art's liberation from the marketplace, but a dematerialized subject's delivery to it.