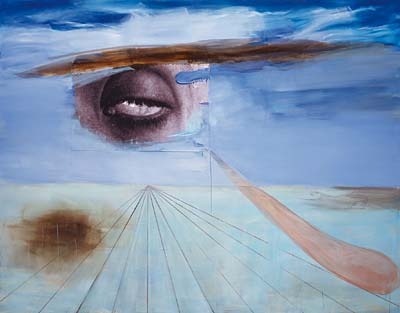 The first major exhibition of Albert Oehlen's work in the UK arrived in two parts - "I Will Always Champion Good Painting", at the Whitechapel Gallery in East London and "I Will Always Champion Bad Painting", at the Arnolfini in Bristol. An ironic dichotomy of good and bad hangs heavy in both exhibitions, but more so in the Whitechapel, where paintings from the late 1980s to the early 2000s by the "bad boy" of painting are presented in an unapologetically conservative and tasteful installation.

Layered with signature washes, figurative and graphic elements, stains, smears and over-painting, these epic works are impressive in their accomplished virtuosity. Large, slapstick pantomimes of colour and expression combined with references to surrealism, Painting, the gothic and architecture, appearing together in a bleary-eyed dance.

"Writing (on the Street)" (2000) has a half-skeleton, half-modernist vase/sculpture running in from stage left with a Daliesque head floating above it. A Doric column topped with a smudged poodle shape occupies centre-stage in front of multiple layers of shapes, daubs and drips. Some are quieter and more pastoral in their "fog" and "mud", such as "Untitled" (1989), a romantic misty marshland of dripping washes with a weird central twisted tree motif that is strangely reminiscent of Sherlock Holmes out on the moors, or the setting of an early werewolf movie.

Things get more formally complicated and menacing in "Scaffolding" (2000), which could be read as a reference to Oehlen's process of painting, which often begins from the scaffold of a collage. Shapes are messily painted above, behind and in front of an unsettling, grimacing tortured face. In many of the figurative fragments Oehlen returns to a Halloween genre of imagery reminiscent of a teenage boy's bedroom, collaged school textbook covers, or the graffitied rucksacks of high school students. In "Evilution" (2002), what looks like a Corinthian column appears splattered and besmirched with a messy porridge of paint on a bright yellow background. A couple of half painted skulls hover in the air and a primitive painting of a human silhouette with stiletto heels stands half finished within a grid of coloured strips.

In the upstairs galleries one is tempted to think that one might find some content, or a possible mapping or orientation of the material that was used for the paintings. Collages are intentionally installed to offer glimpses into the processes or method(s) of painting, according to Oehlen the collages act as "themes" from which the direction of the paintings emerge. Images cut from magazines and newspapers arranged in a seemingly random fashion, odd and ugly juxtapositions, unsatisfactory relationships and dead-end narratives leave the viewer ever fewer clues. On closer inspection possible themes begin to emerge, those that critics and curators might refer to as the "bad boy" stuff, Monty Pythonesque jokes, stock images from Heavy Metal and Glam Rock, half clad buxom women, art history books and furniture catalogues.

Moving into the larger upstairs galleries one finds more iconic figurative paintings that seem to have heavier, more obvious reference to art history and popular culture. "C.C." (2003) is a botched Gerhard Richter, a lazy parody that gives up half way home. "Chucky" (2005) is a cut-out photo of the head of the evil doll of the same name that comes to life to reek havoc in the film "Childs Play", blown up on a slinky black painted figure with long drips that act as cartoon "go-faster" lines, giving the figure a strange leaping dynamic, like a voodoo Picabia, a creepy killer harlequin or acrobat jumping into the gallery.

There are more Richteresque expeditions in grisaille, "Titanium Cat with Laboratory Animal" (1999), looks like Gerhard Richter meeting Picasso on a detour to Philip Guston's house. Perhaps the least subtle painting heading towards cliché is "Eye in …" (2005), a large and empty Daliesque landscape with a pasted photograph of the eye from Luis Buñuel's "Un Chien Andalou" floating in the sky. "Half Naked" (2004) shows the bottom half of a male torso standing on a bath matt in semi-transparent boxer shorts à la David Hockney, strangely out of place in all this high-camp German gothic.

In "I Will Always Champion Bad Painting" in Bristol the fun continues. Still focusing on the 1990s and 2000s, the gallery introduction forewarns us "Anarchic humour and childish perversities are used to full effect". More Richter-inspired grey paintings are filled with strange murky depths and painterly spaces creating a hermetic vocabulary of references and veiled meaning that is pitted against tacky 1990s techno-party flyer/pizza box style posters, a terrible high-art/clip-art that lurches from Photoshop camp to Python.

Oehlen's 1996 paintings produced from digital drawings are day-glow, extremely busy doodles that look suspiciously like the drawings one makes when using a drawing program for the first time, discombobulated by unsure hand eye coordination, with crazy scribbles and lines spiralling out of control. Initially drawn in 1990 on the most basic of drawing programs, it is in these lines that one begins to see an interesting external content seeping in not directly related to the language of painting but to advertising and technology. Upstairs abstract paintings continue to reveal the method and traces of production. The same collages that were used in London to give insights into Oehlen's process are once again exhibited here as a kind of dysfunctional reading room next to "The Albert Oehlen Visitors Resource Centre", a section of a library room dedicated to the artist's contextual material.

On leaving these two exhibitions it is hard to remember individual pieces precisely. The work becomes a swampy Gestalt of muddy washes and drips, coloured doodles and popular culture from another generation. It could be read that by creating this closed insular world that uses the hermetic nature of painting - as Benjamin Buchloh described in 1977 in the case of Gerhard Richter -, Oehlen develops a strategy of resistance against the dominance of consumption. But if it were a strategy how relevant is that argument now within our own highly intensified neo-liberal culture industry machine, where the market rapidly consumes any image, preferably without any ideological, "political" or overly complicated content. A case in point being the recent uncoupling of Martin Kippenberger's work with any problematic content for easier market consumption made clear in "Texte zur Kunst". [1] Still described by curators and critics as the punk painter that uses primitive childish gestures of expression, one wonders how this fits with his chosen role as the bourgeois painting maestro. If, as Oehlen often repeats, the paintings are about revealing a process or method - paintings about painting - then how often does one need to reveal this before it becomes an endless roll of expensive hand painted wallpaper?

These two exhibitions reveal a consistent and intense experiment in aesthetics and image making, exploring the hermetic problems of painting and being a painter. It's a pity that all the best, least innocuous, paintings from the 1980s, are absent from these exhibitions. Including the works which provoked much discussion and consternation about their Nazi content, exploration of German history, and a merciless parody of the fashionable painting movements of the time would have be an interesting counterpoint to the recent surge in painting and the international art market.