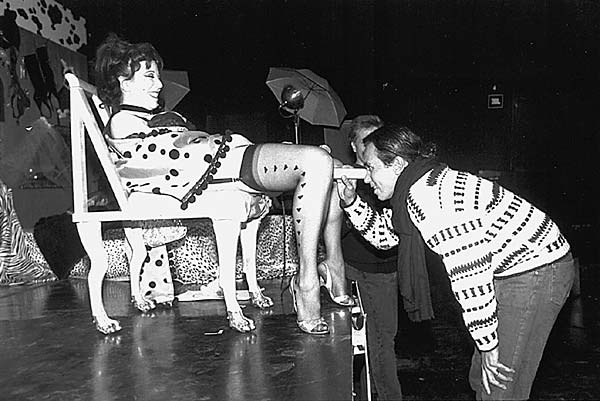 Post-pornography lays claim to a critical, revolutionary potential within the regime of sexual representation through performative excessiveness. But beware: This assertion is camp, a vulnerable gesture situated between implicit, critical, denaturalizing performance and glamorous affirmation (Brecht/Warhol). This doesn’t mean that it cannot have an effect on reality, though.

Post-pornography is a transversal concatentation permeating the most diverse areas of sex and image production, be it on the Internet or in mass culture, in art or theory, in micro- or macro-politics. One of today’s most prominent post-pornographic blueprints stems from Beatriz [Paul B., editor's note] Preciado, who not only publishes articles on a philosophy of post-pornography but also organizes workshops for drag kings in the queer underground, and in 2004-1005 set up a lab for the development of post-pornography at the Museum of Contemporary Art Barcelona, in which short films were produced and new collective body-sex performances were developed together with sex workers, artists and other cultural producers, by employing practices such as S/M or drag and objects such as dildos or artificial arms. Preciado, too, makes reference to Sprinkle: “For me, the issue of (…) pornography should be judged from the perspective of performance theory. That’s something I learned from Annie Sprinkle.” [2]

According to the fundamental analyses of the film scholar Linda Williams [3], pornography consists in the staged re-inscription of the role relations of men as sadistic, dominant and powerful, and women as masochistic, submissive and powerless. The woman, subjected to the male gaze, admits that she desires this seemingly never-ending, identical narration of hetero-normative sex performance. The ultimate proof of the authenticity of the event called “sex”, from which the male performer emerges as a symbolic hero, is the cumshot, which functions as the climax and final proof that real sex has taken place. Williams grasps pornography in the tradition of the biopolitical confessions which Foucault examined in his ”History of Sexuality” [4] and understood as confessions of an inner truth of gender subjects which, from then on, served to anchor sexual identities. Preciado calls attention to the fact that Foucault’s history of sexuality ended in the 19th century – prior to the development of the photographic apparatuses. [5]

If queerness is associated with making the representation of gender ambivalent, one strategy of post-porn would lie in complicating normative representation patterns in a critical way. But as both Sedgwick [6] and Preciado stress, post-porn also produces new forms of sexual subjectivity. Acts such as drag, cruising or dildo sex are not to be understood as the uncovering of the constructedness of heterosexual gender positions, but as articulations of the body that posses their own spatialities and temporalities and enable alternative forms of social practice and the production of subjectivity – and thus alternative forms of sexual identity and subjectivity as well.

It seems to be the case today that post-porn is for the most part re-actualized in (post-)lesbian contexts. The performativity and production of masculinity with women in genres such as butchness or drag kinging, all the way to the concrete materializations of transgender bodies, mark a paradigm change in the power relations of femininity and masculinity. Post-porn takes note of masculinity’s arrival in the age of its performative reproducibility and, after decades of deconstructing femininity, addresses the no less constructed character of masculinity, which it expropriates from biological men.

Merely a tendency towards post-pornographic images can be discerned, be it in the films of Bruce LaBruce, Virginie Despentes and Hans Scheirl or in the photographs of Del LaGrace Volcano. This is reminiscent of the concepts of movement-image and time-image in Deleuzes’s philosophy of film, in which they do not exist in a pure form but in a resonating body, as it were – as approximations and in degrees. [13] In general one can say that a post-porn image emancipates itself from the binary logic of hetero-power and makes available potentials for other forms of representation-critical affirmation, which make new subjectivities and power relations within the practice of sexuality conceivable and debatable. In the best case, this results in affective singularities of lustful image politics that smuggle themselves into the interface of theory and practice with the aim of complicating it. In the process, the gender-specific and economic circumstances of the works, as well as the fact that they are constructed, are suspended and put up for consideration.

Present post-porn debates are far from possessing a unified strategy or position. For example, while Sprinkle’s position can be interpreted as a campy, yet serious, claim to brotherly/sisterly love and humanistic integration, the most determined counterposition can be found in the anti-humanism of the queer theoretician Lee Edelman, for whom post-porn images are (or can be) only produced in sexual acts that place the sexually identitary mode of existence at risk. Terre Thaemlitz is also in line with such a position, yet he addresses it in the form of institutional criticism (e.g., of the art market) or by questioning the notion of subcultural community (e.g., queer communities). [14] Diefenbach, on the other hand, proposes conceiving post-pornography on this side of gestures of transgression and liberation or in relation to the symbolic law of the “big Other”, as a non-utopian strategy aiming at different economies between bodies and desires. [15]

Tim Stüttgen was a writer, performance artist, curator, and journalist.