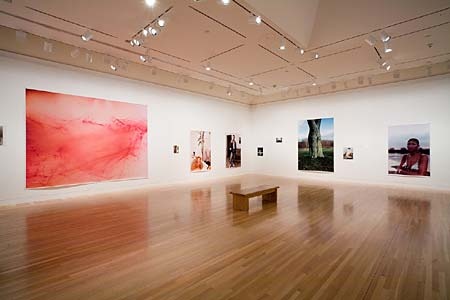 The recent history of photography presents some intractable quandaries. While the emergent non-photographic practices of the nineties were dominated by a renewed genre-bending interest in bricolage, social networking and rough-hewn or vernacular aesthetics - a set of concerns that photography's cultural prevalence seemed particularly adept at addressing - the photographic programs developing at the time were engaged with a diametrically opposed array of concerns. As nineties art audiences became increasingly accustomed to a plurality of approaches aimed at democratizing, or at least livening up the cold austerity of the institution, the contemporary photographic practices most often confronted were Plexiglas testaments to objecthood, anxiously committed to the antiquated genre forms of premodern Beaux-Arts pictorialism framed in monolithic ersatz-minimalist coffins. The ubiquity of architectural tropes underscored this phenomenon; in a compulsive imaging of depopulated modernist topographies that offered a reaffirmation of the stark geometries of the white cube for which they were intended. With increasing regularity, the photographic frame was deployed as a proscenium arch for heightened artifice, vacant expanses and cinematic fantasy, an anxious distancing from the snapshot's quotidian depictions, dazzling and dwarfing viewers with its spectacular accretions, as though allaying photography's historical marginalization, and ideological promiscuity by the force of their imposing grandeur.

Within this milieu, Wolfgang Tillmans's work is something of an anomaly. His photographs appear to renounce their autonomy from the outset, confronting viewers with images whose edges seem blurry, uncontained, as if ready to bleed into one another, and offer neither the emotionally charged "mise en scènes" of American street photography, nor the quality of epic disaffection or serial authority characteristic of the new topographic/Düsseldorf school. To put it another way, Tillmans's photographs are distinctly non-theatrical constructions: his formal predilections tending toward pictorial flatness, and a seemingly offhanded compositional arrangement that sits tenuously within the photograph's flat field. This causes Tillmans's photographs to exude a sensation of incompleteness, which is often mistaken for the ill considered, or unintentional indeterminacy of the snapshot. Yet, Tillmans's treatment of the medium varies too widely to fit comfortably within this categorization. In his exhibitions, the faces of the anonymous butt up against those of the famous, a conflation of private memory and the public sphere that renders the membrane between these seemingly opposed mnemonic repositories more porous than our sense of interminable individuality usually allows; lush abstractions hover along side chance observations of the mundane, a similar negotiation with photographic fortuity having brought both of them into existence. It is fitting that Tillmans's earliest photographs found their home in the pages of picture magazines, varied in subject matter and genre, they easily adapted to the editorial strictures that had come to represent the very incompleteness that the neo-pictorialists were hard at work to correct. Tillmans's editorial experience might also explain the seemingly idiosyncratic form of his installations, which favor densely clustered thematic groupings in an exhibition logic that is somewhere between the taped up mementos of a teenager's bedroom, and the salon style configurations of a magazine page bereft of text; perhaps a nod to photography's most common contexts. This particular reflexivity is called forward in his repeated comparisons between the relation of forms within the photograph, and the relations of objects within an exhibition, as in "Silver Installation Detail" from 2005, showing a series of Tillmans's monochromatic works taped onto a wall, that by analogy, calls attention to the internal logic of the image as a parallel to that of the exhibition.

These signature strengths of Tillmans's practice are perhaps no better expressed than in his first museum survey in North America, a traveling mid-career retrospective originating at the MCA in Chicago, and currently on view at the Hammer Museum in Los Angeles (co-organized by Russell Fergusson and Dominic Molon). Although in this case, both the terms "traveling" and "retrospective" are perhaps misnomers, as only a minority of the work appeared at both venues in identical form, and no strict chronological or categorical logic is overtly proposed. Instead, Tillmans employs his signature approach to the gallery, which is something between that of "installation" and exhibition. Carefully avoiding the isolation of any work, Tillmans proposes each photograph as a momentary stopping point in a larger movement through the show, situating the viewer in a precarious position between distraction and contemplation, forcing them to undertake an interpretive selection process similar to what one would imagine he engaged in while making the images. Tillmans has always used the exhibition context to interweave old and new work, each iteration of his practice acting as a reshuffling of the familiar and the unfamiliar, an operation also at work in his treatment of individual images. His recent "Empire (Punk)", is one such example, in which one of his more iconic early photographs appears as a blown up fax transmission, the clear-eyed lens description of the original sacrificed to the digital artifacts of the fax machine. These momentary echoes of previous moments of reception employ individual photographs as component parts of a system that constantly performs a reexamination and retelling of its own procedures. His constellations of disparate recollections evoke the hybridized cinematic practices of late twentieth century experimental film. The works of Hollis Frampton, Morgan Fisher, Chris Marker and Yvonne Rainer each displayed an equally promiscuous notion of their medium, weaving together found images, quasi-autobiographical narration and abstraction into a materially based subjectivity that rejected the genre-based purism of their contemporaries, and opted instead for the subtle negotiation with the medium's specific confines.

It was this reflexive quality that Craig Owens associated with photography's operation "en abyme", specifically its ability to not only exemplify its own reduplication, but depict it simultaneously. Owens saw this as the void from which the photograph could not escape, an endlessly reduplicated failure of meaning which left only "an overwhelming feeling of absence" [1] as its foregone conclusion. But Tillmans's repetitions eschew this seemingly inescapable reiteration of nihilistic failure through a rejection of photographic transparency (as he said in a recent interview, "the camera always lies about what is in front of it"), and instead emphasizes the epistemic conditions of display that draw the images together (continuing, "and never lies about what is behind it" [2]). Distanced from totalized spectacle, and pantomimed objectivity, Tillmans performs a recovery of documentary photography, materialist abstraction and appropriation from their strict delineation by self-anointed purists. Tillmans appears acutely aware that the taxonomic separation and categorization of subjects is the most pervasive form of cultural violence enacted on the marginalized, and that furthermore, this is a process within which photography is uniquely culpable. As the political geography of the United States appears as polarized as ever, purist regimes of righteous indignation and codified cynicism are all too easy to find, even in the art world, where the discussion of politics and form, personal autonomy and public consciousness are often treated as mutually exclusive. Tillmans cheats these dialectics, producing an exhibition that is rigorous without being rigid, and passionately politicized without being didactic. It is this sensibility that Tillmans perfectly timed exhibition draws to the fore, an insight that aesthetic and social divisions are often one and the same.