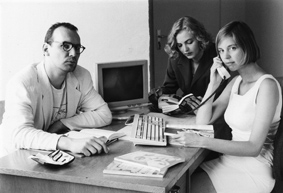 The present issue is dedicated to Stefan Germer, the co-founder and co-editor of this journal, who died in 1998 — that is ten years ago. It pays homage to Stefan Germer without therefore being an issue about him. When we chose the title “Writing For Stefan Germer”, we primarily sought to gesture toward the production of textual contributions that would take up Germer’s specific textual and methodical procedures — not, however, without addressing the altered framing conditions the writer about art confronts today. Such interleaving of art-theoretical writing with its institutional and economic circumstances, we hope, would have been quite in accordance with Stefan Germer’s intentions.

In our view, it was the distinctive strength of Stefan Germer’s writings that they were always both at once — contributions to the formation of theory and discussions that reduced the complexity of their subjects for the purposes of a necessary debate; ambitiously extending into social theory and then bringing the issues down to a few pointed hypotheses; meeting academic standards and the criteria of journalism. They seemed to present an almost ideal fusion of the heritage of Critical Theory and more recent intellectual currents with the subjective voice of “New Journalism”. In the meantime, however, we find that these competencies have severed virtually all ties and emigrated into their respective disciplines of origin (academia vs. journalism). Only rarely do we now find them joined to one another. With dissertations, for instance, it matters little whether they are well written — that is, accessible and engaging. Instead, it is of decisive importance that they display a certain terminology, which not infrequently degenerates into a theory jargon that clarifies neither its terms nor its presuppositions. Conversely, the variants of art-critical writing we encounter on the other side — in culture pages that have thoroughly lowered themselves to the standards of the yellow press  —  suffer from a complete absence of any theoretical education. Whereas a sort of theoreticism has beset large areas of academic writing, today’s smart young art journalists brandish their enmity toward all theory. The rise of this questionable alternative has been fostered by a variety of factors — including financial pressure on authors and the new power of the celebrity culture in magazine journalism, as well as the changed requirements for a career in the university, which now has academics publishing in academic journals and writing grant applications rather than working to write texts that are legible, let alone entertaining, also to a non-academic audience. Shedding more light on the reasons behind this development was one aim of the present issue (see e. g. the essay by Ulrich Gutmair). Other aims included a productive return to Stefan Germer’s methodological premises (see the contributions by Peter Geimer, Tom Holert and Joseph Imorde), a renewed reflection on the task of critique (see the contributions by Dietmar Dath and Martin Saar), and a trial run of new formats of reflective writing about art (see the contributions by Douglas Crimp and Chris Kraus).

In essays such as “Unter Geiern. Kontext-Kunst im Kontext” [1] (“Among Vultures. Context Art in Context”), Stefan Germer time and again called in to question also the premises and preconditions of those site-specific and institutional-critical artistic practices which not only he personally but this journal as well had made it its mission to support — a mission, we remark in passing, by which we abide today. It was part of the critical ethos of editorial work that a journal’s favorite art stands in greater need of critical revision than any other art — a tradition we seek to continue in the present issue (see the contributions on Michael Asher and Yvonne Rainer). In the late eighties and early nineties, it indeed went without saying that friends would critique one another and point out the problems in each other’s cultural production. Artists and critics alike owed it, as it were, to their friendships and to the goodwill they felt for each other’s work to be tough on one another when necessary. Yet this model of critique, as loyal as it was unsparing, is now largely a thing of the past. Here, again, the reasons are manifold; they have to do both with a tendency toward withdrawal ultimately rooted in biographical circumstances and with a fear of engagement in unmitigated altercation. In addition, today’s art world is constitutively less agonistic: back then, “contextual art” and “neoexpressionist painting” still formed two relatively irreconcilable poles. The history of the artistic field, we might say with Bourdieu, was a history of struggles. Now, by contrast, the artistic field, instead of being structured by clear frontlines, opposing camps and easily identifiable antagonists, has disintegrated into a multiplicity of segments — countless micro-universes that exist side by side, entering (or compelled to enter) into temporary alliances without having much, if anything, in common. That is also an expression of the imperative of cooperation that dominates a globally networked art world, an imperative that is, thus Luc Boltanski and Ève Chiapello, in any case characteristic of the new spirit of capitalism. When knowing people becomes an asset of sorts, when economic necessities force even yesterday’s enemies to cooperate, writers will in one way or another be reluctant to offer severe criticism. The risk is simply too great that they end up turning friends into enemies.

We have no intention to glorify Stefan in retrospect into a hero of confrontational writing. Like every one of us, he was a perfectly capable diplomat and tactician. Nonetheless, in writings such as those about Gerhard Richter’s family portraits [2] or the relationship between art and fashion in Wolfgang Tillman’s pictures [3] he made it his duty to point out the problems inherent in these productions even though that meant he ran the risk in each instance of (temporarily) antagonizing one faction of the art world. It is this problem-oriented form of art-critical writing, one that momentarily infringes against the imperative of cooperation, that we would like to revive in the present issue and pursue further in subsequent issues — not least in memory of Stefan Germer.