The present issue of Texte zur Kunst is dedicated to the topic of “design”. All contributions agree on the diagnosis that this concept is currently being reevaluated in the fields of visual arts, aesthetics, architecture, urbanism, and product design. On the one hand, the usually prescriptive design utopias of modernity, preferably manifesting themselves in master plans for entire cities and regions, are no longer persuasive. On the other hand, the avant- garde efforts to recreate in a comprehensive and aesthetics-oriented manner the Lebenswelt (living space) of the individual in mass society have proven to be delusive pursuits. Nevertheless once again the functional ambition of design today seems to coalesce with an emancipatory promise. At the same time, the concept of design was never defined as broadly as it is now – corporate design, interior design, interaction design, and creational design are just a few buzzwords in this ongoing process of semantic expansion. All these terms raise one and the same question, and an old one at that: Does form follow function (again)?

Given this situation, the current issue attempts – contrary to popular diagnoses and narratives of decline, according to which “design” equals “crime” (Hal Foster) – to provide arguments for an understanding of design as a relevant practice for solving social crises. Thus grasped, the concept may also be enabled as a point of reference for current artistic practices, operating with a reconstruction or an actualization of the formal languages of modern design. The exchange value of design has long dominated the discussion. As a core area, only decoration and surface manipulation in industrial commodity production seemed to remain. This historical mortgage is also revealed in the citations of sign exchange values of design classics, as they were popular in the visual arts relying on “relational aesthetics”. Now this might be contrasted with the critical potential of the use value of design solutions and with the analysis of related manufacturing processes based on a division of labor (see Sven Lütticken’s contribution and Jorge Pardo’s cover design). The decisive moment of an emancipatory, utopian concept of design may lie in the insistence on the functionality of planning and devising (see the conversation between Jesko Fezer and Tomás Maldonado).

This focus relies on the insight that the design of exhibitions and the context it produces must be considered as a constitutive element of a critical-reflexive aesthetic production. In this way, both ideas of autonomy and overly seamless transfers between cultural institutions and designed living space are being challenged (see Helmut Draxler’s contribution). Philosophical aesthetics, too, must be credited for the enduring revision of design; particularly Jacques Rancière’s political aesthetics, centering on the “distribution of the sensible” und its impact on the possibility of democracy, which at second glance turns out to be an effort to conceive of the exchange relationship between art and design beyond the dichotomy of autonomy and applied design (see Ruth Sonderegger’s contribution).

If this issue suggests avoiding any culturally pessimistic devaluation of design, this is in full awareness of the well- justified criticisms of the modernist design utopia on account of its universalist and colonialist ambitions. This utopia also needs to be reexamined under the conditions of the “creative industries” of Post-Fordism (see Regina Bittner’s contribution). Indeed the relevance of design has been expanded, insofar as that the entire field of knowledge production participates in design models.

Still, it is worthwhile to look back to the ambitions of historical examples of a broadened understanding of design; with hindsight they can well serve as productive correctives and impulses, both for the currently recurring debates about the democratizing implications of planning and design, as well as with regard to biopolitical claims of a new life, which is in need to be designed time and again (see Tom Holert’s contribution).

Since March 2006 Texte zur Kunst has been making all contributions to the main section available to a non-German audience in an English section. As in previous issues originally English reviews are not only published in German, but may also be found in the “English Section”. 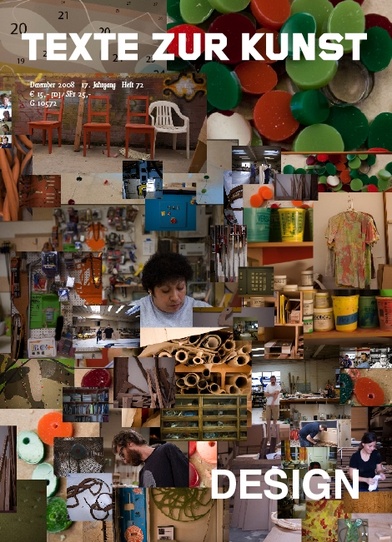